Golden Myanmar Airlines is planning to launch services to Singapore on 5-Apr-2013, the first phase of the start-up carrier’s plan to build an extensive international network. The expansion at Myanmar’s first home-grown LCC will further drive up growth in Myanmar’s dynamic international market, which has seen a 67% increase in seat capacity over the last year.

Local carriers also are responding to the favourable market conditions by growing domestically and internationally. Myanmar’s LCC penetration rate, which is the lowest among the largest seven Southeast Asian countries, will continue to rise in 2013 as Golden Myanmar and foreign LCCs expand.

Golden Myanmar became the eighth airline in Myanmar when it launched services in Jan-2013. As the first carrier in Myanmar to follow the LCC model, Golden Myanmar is trying to differentiate itself from its competitors in the highly fragmented market.

Golden Myanmar is also differentiating itself by becoming the second Burmese carrier to serve the country’s international market. Currently Myanmar has seven carriers that are only operating in the domestic market, including Golden Myanmar. Only one of these seven carriers, government owned Myanma Airways, has a fleet of more than five aircraft. 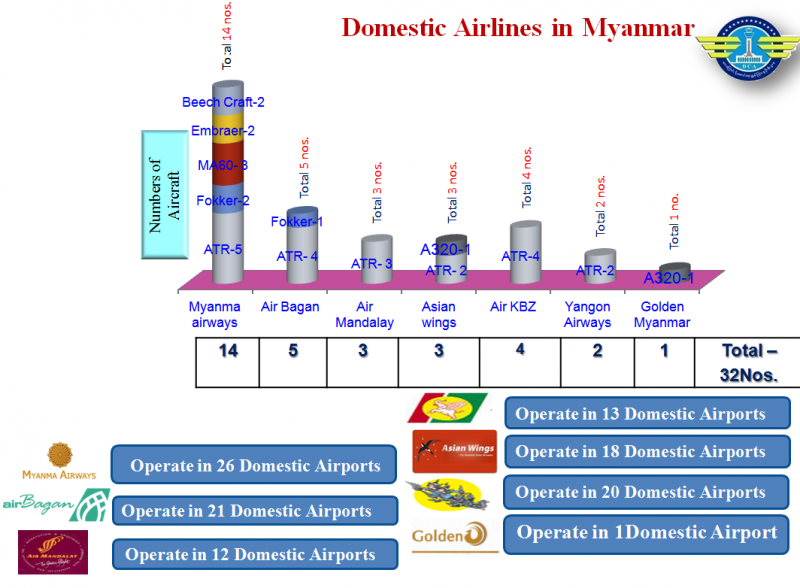 Golden Myanmar plans to enter the international market on 5-Apr-2013 with a daily flight on a Mandalay-Yangon-Singapore routing. Golden Myanmar managing director Aung Gyi advised CAPA that the carrier is now looking at several potential additional international markets for 2013, including Bangkok, Delhi and Hong Kong, as the carrier’s A320 fleet expands from one to three aircraft.

There are huge opportunities in Myanmar’s international market as leisure and business demand for services to the country has surged since the country opened up following the landmark elections of Apr-2012, which were won by Aung San Suu Kyi’s National League for Democracy. But so far, with limited resources at home, predominantly only foreign carriers have responded to this market demand.

But the country’s only existing international carrier, Myanmar Airways International (MAI), will only account for approximately 20% of Myanmar’s international capacity in Apr-2013, down from 27% one year ago. MAI is currently the smallest flag carrier in Southeast Asia. While it is now pursuing modest fleet and network expansion, it is not growing as fast as the overall market, leaving an opportunity for new local carriers such as Golden Myanmar to enter the international market.

MAI currently serves only five international destinations and just two cities in Myanmar – Yangon and Mandalay. It does not serve the domestic market. MAI has flagged Dubai, Hong Kong, New Delhi, Seoul and Tokyo as possible future destinations although MAI could be dissuaded to launch Hong Kong and Delhi if Golden Myanmar ends up operating the routes first.

Foreign carriers are expanding more rapidly, with existing carriers serving Myanmar adding capacity and opening new routes. At least two more foreign carriers will also enter the market in 2013, Thailand’s Nok Air and Lao Aviation, for a total of 23. Including MAI and the launch of international services from Golden Myanmar and local full-service carrier Asia Wings, Myanmar will have at least 26 carriers in its international market by the end of 2013, up from 14 in 1H2012.

While Yangon accounted for nearly all of the country’s international passengers in 2012, much of the attention in recent months has turned to smaller Mandalay. Mandalay Airport only had one international route, a China Eastern regional jet service to Kunming in neighbouring China, prior to Thai AirAsia launching Bangkok-Mandalay service in Oct-2012.

MAI has since launched international services from Mandalay to Bangkok, Kunming and Gaya in India and is considering more international routes including Singapore. Thai Smile will launch service between Bangkok and Mandalay on 31-Mar-2013 and will be joined on the route by Bangkok Airways from Sep-2013.

The rapid growth at Mandalay is partly because of congestion at Yangon, which is now operating well over its designed capacity and will have limited space for expansion until a replacement airport opens. But as Myanmar’s second largest city and as the country’s most popular tourist destinations due to its famous Buddhist temples, Mandalay is also a growing destination in its own right.

While Golden Myanmar has its operating base at Mandalay, the carrier plans to route its international services through both Mandalay and Yangon. For example, Singapore will be served on a Singapore-Yangon-Mandalay routing while Hong Kong is expected to be served on a Hong Kong-Mandalay-Yangon routing.

The carrier already operates a domestic service between Mandalay and Yangon, which is served once per day with its single A320. This service will essentially be expanded to Singapore when the Singapore service begins on 5-Apr-2013.

Myanmar domestic market is not yet ready for significant LCC capacity

Golden Myanmar saw its load factor on the Yangon-Mandalay route surge from 70% in the initial weeks to nearly 100% in Feb-2013, illustrating the potential of the LCC model to stimulate demand in the Myanmar market. But its load factor has dropped since Asia Wings began operating the A321 on the Yangon-Mandalay route. This illustrates the relatively limited small size and fragility of Myanmar’s domestic market.

Asian Wings currently operates two daily flights on the Yangon-Mandalay route, according to schedule information on the carrier’s website. Asian Wings and Golden Myanmar now have more capacity between Yangon and Mandalay than the other five carriers serving the route – Air Bagan, Air Mandalay, Air KBZ, Myanma Airways and Yangon Airways. These five domestic-only carriers have between four and 12 weekly frequencies on the route, generally using ATR 72s.

While Myanmar is a big and resource-rich country with a population of about 48 million, it is one of the poorest in Asia. With GDP per capita of around USD1,400, few of the population has the discretionary income yet to afford flying, even on an LCC.

Golden Myanmar’s network plan includes several more domestic routes. But most of the markets are not large enough to support 180-seat aircraft, even with lower fares, particularly given the large number of domestic carriers in the market.

Golden Myanmar is planning to attack the domestic market, with plans to acquire two ATR 72s in 4Q2013. While going with a mixed fleet is unusual for an LCC, particularly in such an early stage, turboprops are necessary to penetrate Myanmar’s domestic market.

As the country’s economy and middle class grows, opportunities will open up for the use of A320s on more domestic routes. When that occurs, the ATR 72s can be shifted to open up thinner domestic markets. But for now Yangon-Mandalay is probably the only suitable domestic market for narrowbody aircraft.

Competition is also an issue domestically as all six of Myanmar’s other domestic carriers operate ATRs. Placing a jet on the route comes with higher costs that cannot be offset, particularly if there is not enough demand to fill 180 seats.

Air Bagan and Myanma Airways now use jets on some domestic routes, but have 100-seat regional jets in the Fokker 100 and Embraer E190. Until demand grows to a higher level and/or there is consolidation in the domestic market that reduces the number of carriers on the main domestic routes, Golden Myanmar's 180-seat A320 is too large.

The international market has more opportunities for A320-size aircraft but here local carriers face intense competition with foreign carriers. Burmese carriers do not have a strong brand overseas and therefore need to rely on the local market for international services. But there is relatively limited local demand for international services beyond the three biggest markets of Bangkok, Kuala Lumpur and Singapore – which are frequent business and holiday destinations for Myanmar’s upper class.

Singapore is the second largest international route from Yangon with about 14,000 weekly seats, but like all of Myanmar’s international markets it is now dominated by foreign carriers.

SIA and its regional subsidiary SilkAir now account for 45% of capacity on the Yangon-Singapore route, while Singapore-based LCC Jetstar Asia accounts for another 17%. Both groups have added capacity on the route within the last year, with SIA taking over one of SilkAir’s daily flights and Jetstar Asia upgrading its service from four weekly flights to daily. 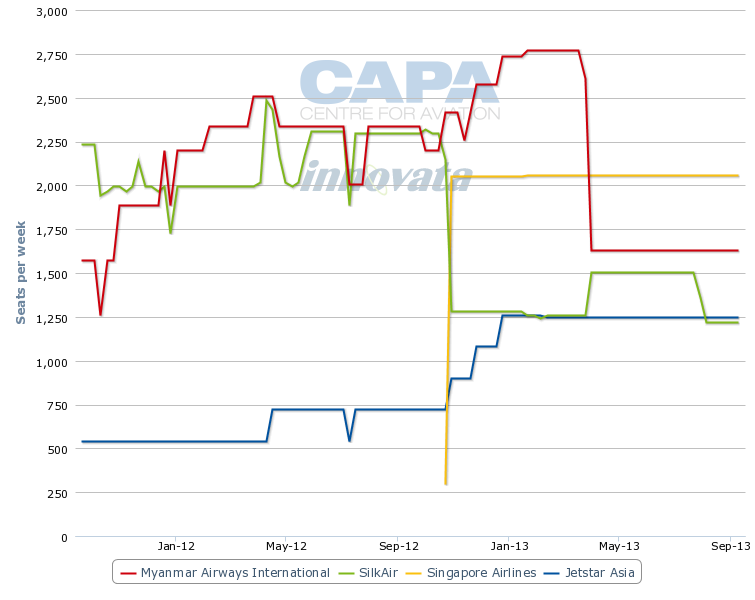 MAI also serves the Yangon-Singapore route but has just cut capacity in the non-stop market from 17 to 10 weekly flights while maintaining seven weekly flights via Bangkok, according to Innovata data. Golden Myanmar should stimulate new demand, particularly from the Myanmar end. While the route has an LCC in Jetstar Asia, Jetstar’s fares in the market have traditionally been relatively high. Golden Myanmar is offering fares starting at USD59 before taxes for Yangon-Singapore and USD95 excluding taxes for Mandalay-Singapore.

Golden Myanmar also has secured the rights to serve Hong Kong and is now waiting for the results of a commercial feasibility study before firming up a launch date. While the carrier is keen on the Hong Kong market it is slightly reluctant as there is limited point-to-point demand between Myanmar and Hong Kong. Cathay Pacific subsidiary Dragonair entered the Hong Kong-Yangon market in Jan-2013 but is relying primarily on demand from connecting passengers, particularly from Korea, Japan and the US.

While point-to-point demand can be stimulated, the market will be primarily inbound and Golden Myanmar does not have a recognisable brand in Hong Kong. It would likely need to have interline agreements in place to make the route sustainable, at least until sufficient local demand builds up. Golden Myanmar may need to follow a hybrid carrier model, which it has been considering, and switching to a less basic reservation system to make a route such as Hong Kong viable.

Bangkok, which is the largest international destination from Yangon, is a safer bet. Competition is fierce in the Yangon-Bangkok market as four carriers now provide over 22,000 weekly seats but the market is big and demand continues to grow. 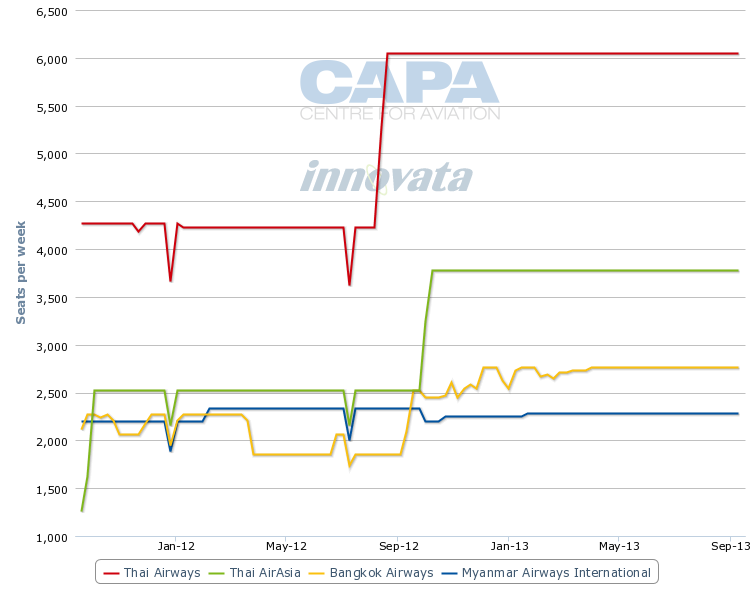 Hong Kong and Bangkok may both be launched in May-2013. But Golden Myanmar is also studying the Yangon-Delhi market as an alternative to Hong Kong, should it decide that Hong Kong is not commercially viable. There are growing ties between Myanmar and India, but currently no carrier operates non-stop between Yangon and Delhi. Air India and MAI link Yangon with Gaya, a popular Buddhist site in northeast India.

The launch of Bangkok and Hong Kong or Delhi will be made possible by the delivery of a second A320, which is expected to be placed into service in early 2Q2013. Golden Myanmar plans to add a third A320 by the end of 2013, which will support further international growth while the two ATR 72s will be used domestically.

Golden Myanmar has plenty of opportunities to expand in both the domestic and international markets. As the first domestic LCC in Myanmar, its low fares should be able to stimulate demand, as inbound tourism grows and local business and leisure travel expands. With limited surface infrastructure, air travel is the most convenient way to travel domestically, with 27 commercial airports spread across the country. Several of these airports are now in the process of being upgraded as part of a government initiative to promote more domestic travel by foreign tourists as well as locals.

LCCs currently account for only 22% of international capacity in Myanmar, providing opportunities for Golden Myanmar and foreign LCCs. Myanmar is geographically well positioned for greater LCC penetration as it is within narrowbody range of South Asia, Southeast Asia and China. As Myanmar’s economy and tourism sector expands, demand for budget travel between Myanmar and other Asian countries will increase exponentially.

The market should in due course prove large enough to support a home-grown LCC. But there will be challenges, including intense competition with both local and foreign carriers which are also racing to tap into growing demand for travel to, from and within Myanmar.