Weakness in long-haul markets from Brazil continued to pressure LATAM Airlines Group during 1Q2013 as competitive capacity increases triggered depressed loads and unit revenues in its international network. But LATAM’s efforts to restore strength in the Brazilian domestic market and the relative strength in the group’s Spanish speaking companies should help to offset some of the continuing pressure in LATAM’s international network.

The company’s attempts to bolster international service during the last year to offset some of the continuing weakness in the Brazilian domestic market have faltered somewhat due to competitive capacity increases by American and United in the US-Brazil market, and LATAM’s own expansion of supply in the market. The company’s overall capacity increase in its international markets during 1Q2013 was 12.3%. 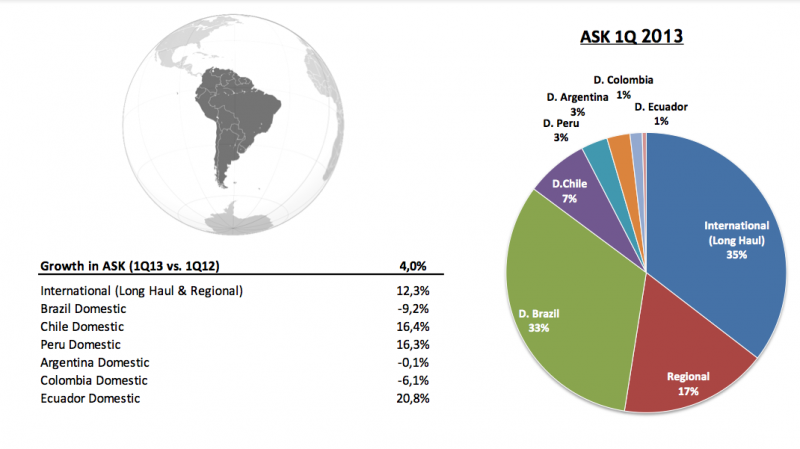 Consolidated traffic for LATAM Airlines Group increased 6% during 1Q2013 on 4% traffic growth, which helped lift its passenger load factors 1.5ppt to 78.8%. But depreciation of the Brazilian currency helped to drive down the group’s yields by 4.3%, which in turn pushed unit revenues downward by 2.4% year-over-year during 1Q2013. Currency depreciation also contributed to a 49% drop in LATAM’s 1Q2013 profits to USD42.7 million as TAM recorded a USD133 million foreign exchange gain during 1Q2012.

LATAM during the last year has aimed to leverage Lima as a connecting point for north-south traffic flows between the Americas and bolstered its service between the US and Brazil through frequency additions by TAM from Miami to Brasilia and Belo Horizonte and an expansion in seat capacity by approximately 63% by replacing 223-seat Airbus A330s with 362-seat Boeing 777-300ERs on service from São Paulo to Miami. During 4Q2012 TAM’s capacity grew by about 22% in the US-Brazil market, while American and United added 16 weekly frequencies between the two countries.

As all three carriers ramped up capacity during 2H2012, the competitive pressure intensified, and LATAM estimates its load factor in its international markets (which also include long-haul service from Argentina, Chile and Peru and intra-South America service), fell 4.5ppt year-over-year during 1Q2013, which also pressured unit revenue results. The negative performance is largely attributable to the long-haul network from Brazil, and LATAM is making some moves to improve the fortunes of its international network.

LATAM has already cut service from Rio de Janeiro to Orlando, and in Aug-2013 plans to eliminate service from Rio to Frankfurt and Paris, opting to route those passengers through São Paulo, where service to those two European destinations will remain intact.

Once TAM exits the two European long-haul markets Air France will hold a monopoly on the Rio-Paris service while Lufthansa will remain the dominant carrier on service to Frankfurt. TAM will continue to compete with those two European flag carriers on service from São Paulo to Frankfurt and Paris. 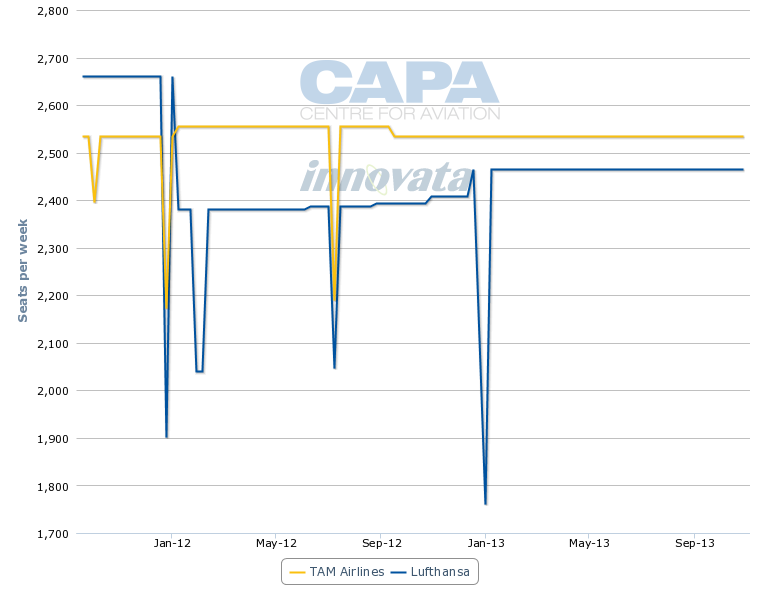 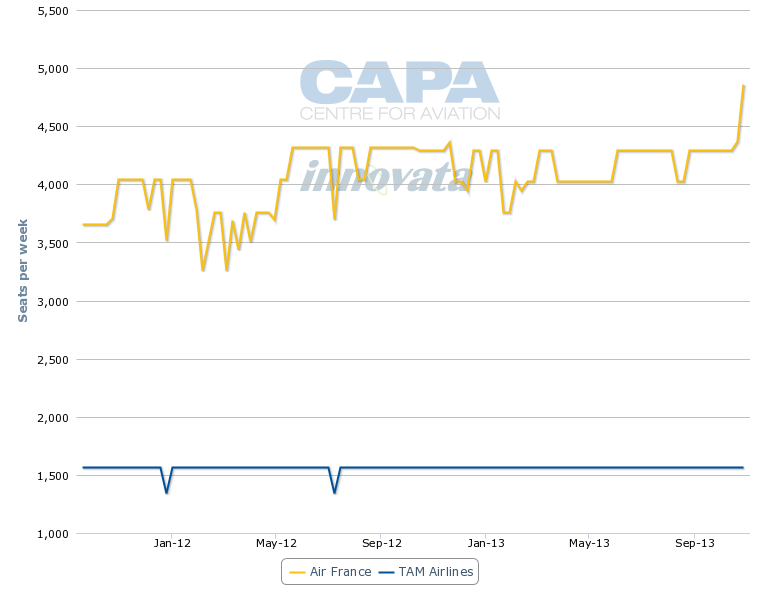 The carrier’s management also reiterated previously stated expectations that, once a codeshare launches between TAM and American (as part of TAM’s eventual transition to oneworld) in 3Q2013, the performance of its international network will improve as a result of TAM’s passengers having better connecting opportunities at American’s Miami hub – where the carrier holds a commanding 70% seat share.

TAM does not serve any of the US hubs of its current Star partner United (it operates to JFK versus New York Newark). LATAM management is banking on the broader US network it will soon be able to offer in the US market to improve the overall performance of its international network after the slow season winds down in the southern hemisphere at the end of 2Q2013. 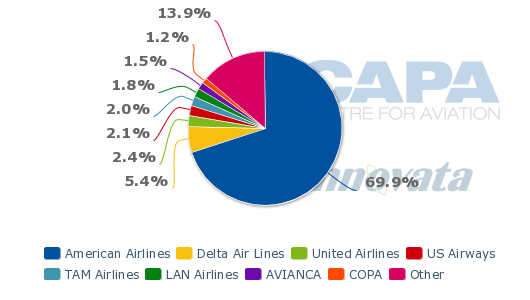 LATAM focuses on revenue management by segment in Brazil

While depreciation of Brazil’s currency with respect to the US dollar-depressed LATAM’s 1Q2013 yields, its strategy in managing Brazil’s weak economy and softening demand helped the carrier grow its traffic 3.4% year-over-year in the Brazilian domestic market and grow its load factor 9.5ppt for 1Q2013 to 77.7%.

Those results are far different from the performance of TAM’s main Brazilian rival Gol.

During 1Q2013 Gol decreased its capacity in the Brazilian domestic market by 15.7%, but its traffic fell 15.5% and load factor remained essentially flat. Gol’s network is Brazil-centric, and its yields improved 13.5% year-over-year, which on a USD basis were roughly 11 cents compared with LATAM Group's 10.5 cent yields.

Yet Gol’s average load factor during 1Q2013 did not match the approximately 80% recorded by Brazil’s three other major airline groups. Even with its strong yield growth it is tough to imagine that with loads that far below the industry average it will get its revenues up to the necessary levels to turn its fortunes around. Gol’s market share in the Brazilian domestic market fell 6ppt year-over-year during 1Q2013 from 41% to 35%.

Gol’s 68% load factors during 1Q2013 (while above system break-even of 64%) were far below the average recorded by TAM, Avianca and Azul/TRIP, which together with Gol comprise the four largest airline groups in Brazil. Azul and TRIP are presently in the process of completing a merger.

Gol executives have admitted that the ideal scenario is a parallel lift in both load factor and yields, but stressed the carrier has no interest in creating a fare war in the Brazilian domestic market place.

In some respects TAM has likely benefitted from more sophisticated revenue management as a result of the creation of LATAM, which has helped the airline group better manage the dynamics of the Brazilian domestic market based on passenger segmentation. Gol is a low-cost carrier that offers some perks for business travellers, but TAM with the extensive network of LATAM can leverage the geographical breadth of the combined carriers' networks to make a more attractive offer to business travellers to boost loads and sustain or improve yields.

The advantage of LATAM’s geographical diversity is also reflected in the group’s top-line financial results, which included a 1.5% rise in revenues to USD3.4 billion while Gol recorded a 3.8% fall in top-line revenues to USD993 million. 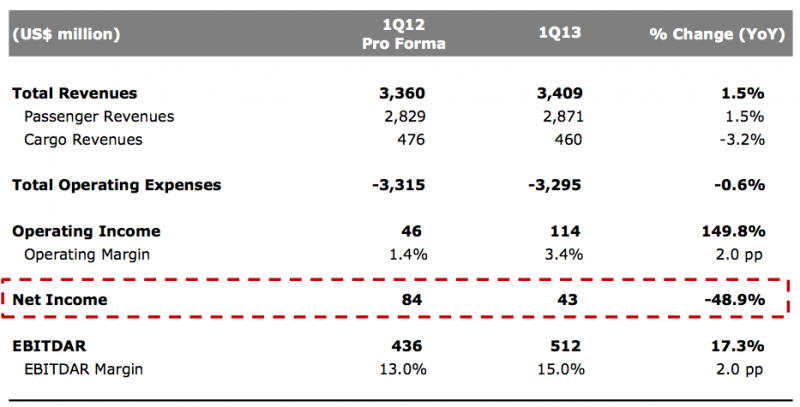 While LATAM faced competitive challenges in its international markets during 1Q2013 that helped to depress yields, a continuing weak cargo environment also pressured the company’s performance. Despite the challenges it faced in the Brazilian domestic market and its international network, the capacity increases on the group’s domestic routes in Chile, Ecuador and Peru were shrewd decisions in supporting the increase in the group’s passenger revenues, which grew 1.5% to USD2.8 billion.

As it moves closer to the anniversary of closing its historic merger, LATAM maintains it will achieve USD600 million to USD700 million in synergies by 2016. Its 1Q2013 top-line results show the merger is beneficial in regards to the scale the combination has created in building a fortress against pockets of weakness. Latin America’s largest airline group seems to have built the necessary foundation to weather the inevitable cyclicality of the airline business; but much work needs to be completed before the combination will be deemed a success.