South Korea’s largest airline Korean Air Lines swung to a third quarter (three months to Sep-2011) net loss as increased fuel costs, a weak Korean won and soft cargo demand eroded the carrier’s bottom-line. The result highlights how closely tied the carrier is to currency fluctuations and cargo demand from Europe and the US, which is expected to remain sluggish throughout 4Q2011 and into 2012 as a consequence of Europe's debt crisis and weak demand in developed economies.

Korean Air senior VP Cho Won Tae earlier this month noted that while revenue in 2011 is relatively on-par to 2010 levels, costs have surged due to increased fuel costs. Korean Air, and its peer in the South Korean market, Asiana Airlines, are highly exposed to weakness in the freight market and have echoed comments made by North Asian peers such as China Southern, Cathay Pacific and China Airlines in noting that cargo has been weak in 2011, with freight demand failing to meet expectations. Korean Air has stated it expects the situation in 2012 "to be worse". 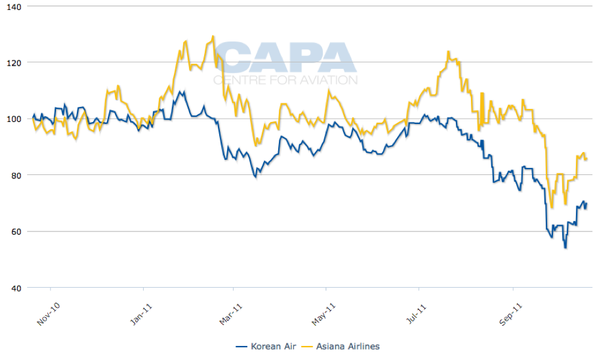 Korea’s international airlines are also facing rising competition from foreign carriers and yields continue to be pressured in the domestic market amid increased LCC penetration. A pervasive and very effective high-speed rail (HSR) system has also substantially undermined the domestic airline market when it was rolled out over the past decade. But the majors are fighting to restore their position, each with LCC subsidiaries.

Korean Air posted overall foreign-currency translation losses of KRW771.2 billion (USD680 million) in the quarter, compared with a gain of KRW345.2 billion (USD305 million) in the previous corresponding period. The volatile Korean currency plummeted more than 9% during the Sep-2011 quarter, with the US dollar rising from KRW1078.10 on 30-Jun-2011 to KRW1179.50 on 30-Sep-2011, pushing up Korean Air's dollar-to-won translation losses. The carrier’s dollar-denominated debt increased 8.3% over the period in review to USD6.54 billion. Fuel expenses soared 34% as the average price of jet fuel jumped 42% to USD131/barrel, with the increases exacerbated by the weakening of the Korean won. Jet fuel accounts for around 40% of the carrier’s total operating expenses. 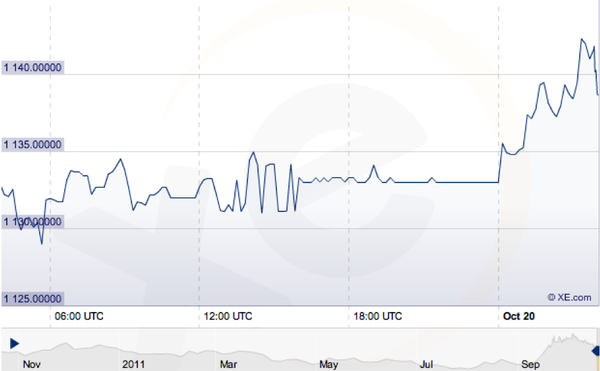 11% increase in international passengers but 6% slump in cargo traffic

During 3Q2011, Korean Air reported a 10.6% rise in passenger traffic on international routes, driven by increased demand from China and Japan, although this increase failed to offset these higher fuel costs. Korean Air is the world’s 11th largest carrier by international passenger capacity (ASKs) based on Innovata data.

The unique Korean market is partly illustrated by the remarkably high international market share of its two flag carriers: 63%, one of the world’s highest. 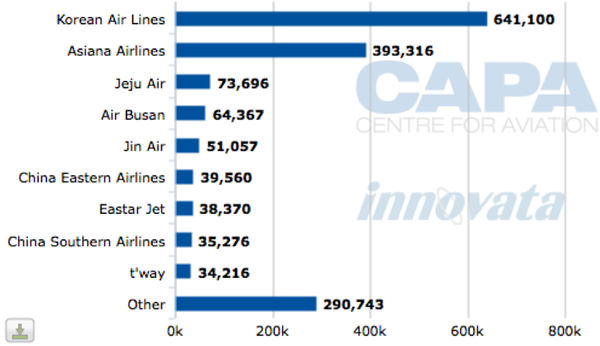 Overall, passenger demand has risen steadily for South Korea’s airlines in 2011. The South Korean market is growing rapidly, despite traffic growth moderation at its North Asian neighbours, with air traffic volumes reaching record levels with 382,813 flights in the first nine months of the year, according to the Ministry of Land, Transport and Maritime Affairs (MLTM).

Bank of Korea reported national tourism revenue increased 44% year-on-year to USD1140 million in Aug-2011, the highest level since Nov-2008. The increase is attributable to substantial increases in visitor arrivals from Japan and China. The Korea Tourism Organisation has forecast annual foreign tourist arrivals to Korea will reach 10 million for the first time this year, with annual tourist arrivals expected to increase to 50 million over the next five to six years.

Outbound cargo shipments slumped 13% and overall cargo traffic recorded a year-on-year weakened 5.9% in the third quarter “due to sluggish demand for IT products such as display monitors and cellphones", the airline said.

Korean Air, the world’s second largest international cargo carrier and South Korea’s largest cargo operator, this month stated European freight demand was missing expectations as an economic slowdown resulted in a reduced demand for mobile phones and consumer electronics. “There should have been more demand from Europe this time of the year,” senior vice president Cho Won Tae said in an interview with Bloomberg. Cargo has been “weak” network wide all year, while passenger demand has risen steadily, he said. The carrier has reported year-on-year reduction in freight traffic this year except for Jan-2011.

Korean Air Cargo has stated it intends to "pay keen attention on strengthening market competitiveness by promoting aggressively on the existing key markets and to look for sustainable growth by developing emerging markets such as Central and South America and Central Asia". The carrier also noted that “both Europe and America are showing similar patterns and are not showing good performance”.

The company has also expressed optimism that a free trade agreement with the European Union will improve its prospects. Korean Air could be a major beneficiary of a USD71 billion increase in commerce between the European Union and South Korea expected to flow from a 01-Jul-2011 free trade agreement. It may even help Korean Air reclaim the rank of the world’s largest international air cargo company that it lost to Cathay Pacific in 2010.

The trade agreement between the 27-member EU and South Korea, the world’s seventh largest exporter, is expected to expand their almost USD100 billion of annual commerce by USD4.7 billion p/a over the next 15 years, according to a 2010 study led by Korea Institute for International Economic Policy. Korean Air hopes South Korea’s annual air shipments may rise 6.4% and improve 2.8% by 2015. South Korea’s annual air shipments may rise 6.4% and imports by 2.8% by 2015, Korean Air said, noting that auto parts, medicines and fine machinery are industries expected to benefit from the South Korea-EU agreement. At present, the carrier earns around 30% of freight revenue from European operations, compared to around 40% from the Americas.

A380 operations ‘doing very well’ and have been ‘very profitable’

In terms of fleet, Mr Cho earlier this month said the A380 has "been doing very well for us" and has "been very profitable". The carrier has continually noted that it expects its A380 operations to boost profit margins.

Korean Air launched its first A380 service from Seoul Incheon to Narita and then to Hong Kong on 17-Jun-2011. A380 service to New York followed from 09-Aug-2011 (with load factors maintained at 90% since launch) with service on the Seoul Incheon-Los Angeles being inaugurated on 11-Oct-2011. By the end of the year Korean Air will have five A380s in operating to Tokyo Narita, Hong Kong, Bangkok, New York and Los Angeles. Korean Air has 10 A380s on order, which it hopes to have in operation by 2014.

Korean Air is operating the lowest density A380s in the industry, configured in a three-class layout with 407 seats. The A380 cabin features 12 first class, 94 business class and 301 economy class seats. Korean Air has become the first airline to offer a flying duty free shop. The stall has been designed and manufactured for Korean Air by AIM Aviation and will replace 13 economy seats on the A380. The carrier expects to make up for the lost revenue in duty free sales.

Korean Air will also be the Asian launch customer for Bombardier’s CSeries programme, having signed a firm order for 10 CS300s at the end of Jul-2011. Korean Air has determined it “can operate the aircraft with very high efficiency” on 45 routes in China, Japan and Southeast Asia, with the aircraft likely to be deployed on thinner domestic routes, replacing B737s, which the airline will redirect to denser city-pairs. The carrier has also stated it plans to introduce its 10 B787-9s from 2016 "as planned".

In other South Korea fleet news, Airbus director of product marketing Richard Carcaillet forecast the South Korean aviation market "will have a demand for 382 new aircraft over the next 20 years, worth around USD67 billion". The forecast comes amid expected robust growth over the next decade. Mr Carcaillet stated South Korean air carriers, including Korean Air Lines and Asiana Airlines, are forecast to prefer widebody aircraft with more than 100 seats, reflecting a rapid growth in international passengers. Airbus predicted South Korean companies will order 167 single-aisle aircraft (such as the A320), 172 mid-range (such as A330 and A350 equipment) and 44 of the largest aircraft (A380) through 2030. Airbus has forecast average annual growth in passenger traffic of around 4.9% per annum with the highest proportion of traffic through Seoul Incheon International Airport. “Incheon is already firmly established as one of the main gateways to Asia, serving not only Korea, but also as an increasing transit point in the region to North America and Europe,” Mr Carcaillet said.

While both Korean Air and Asiana Airlines are facing increased competition from LCCs in the domestic market, both carriers have their own LCC subsidiaries.

Domestically, South Korea’s five major LCCs held an aggregate domestic market share of 40% in the six months to Jun-2011 (1H2011), a new record for LCC penetration in the North Asian nation. Unlike its neighbours, Korea is inhospitable to foreign LCCs but has a flourishing low-cost industry of its own. Plans for Incheon-Tiger Airways were nipped in the bud in Dec-2008 but there are now five LCCs in the market: the independent EastarJet and Jeju Air and T’way Airlines (previously Hansung Airlines), as well as two lower cost units of the flag carriers – Jin Air (Korean Air) and Air Busan (Asiana Airlines).

This influx of new carriers eager to build viable market shares and the presence of an efficient surface transport alternative has made for an awkward pricing environment, translating into low yields, losses and carrier failures. But the effect has been that, in search of profits, the LCCs have adapted their strategies and are increasingly turning to international routes, although this remains limited.

The percentage of passengers travelling internationally on the nation’s LCCs has increased over fivefold from 0.9% in 2010 to 4.8% in the 10 months to Oct-2011. However, the previously domestic LCCs are expanding in the wake of a Ministry of Transport relaxation of restrictions on qualification to operate international services. In mid-2008 the restrictions were reduced from two years prior domestic operations and 20,000 flights with no safety violations, to one year and 10,000 flights with no violations. 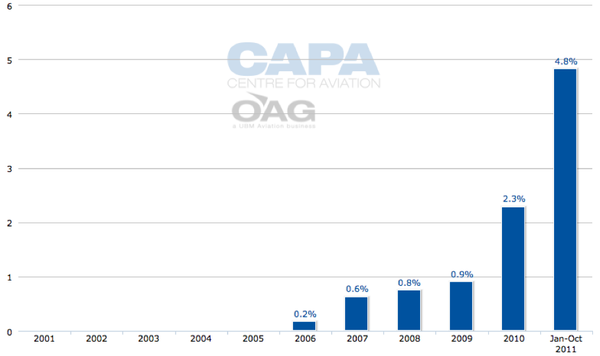 Following this change, and as the country’s young LCCs reached their first anniversary of operations, the number of international services offered by LCCs have increased, a trend that should continue expanding their geographical scope to take advantage of South Korea’s growing international air travel market, and to diversify away from the loss-making domestic market as Korean Air and Asiana Airlines use their LCC units more strategically in their networks in future.

To offset the sharp rise in fuel costs, Korean Air plans to focus on profitable routes and explore new markets, both through its full service and low-cost operations. The carrier also noted that the addition of five A380s on long-haul routes would likely boost profit margins, while the free trade agreement with Europe is expected to increase cargo business. "We will mobilise jumbo airliners such as the A380 and B777-300ER into popular routes in an effort to increase sales," the carrier said, continuing, "We will improve profitability of our cargo lines by seeking better routes and markets." The carrier also plans to lighten aircraft loads and develop shorter routes, given the high cost of fuel. Meanwhile, it is unclear whether the carrier still anticipates to report a record operating profit in 2011, as per a Jan-2011 forecast.