The spotlight in Latin America this year will primarily be shone on LAN and TAM as the two airline groups complete their landmark merger and begin the integration process. But it is also a key year for Avianca-TACA, which completed their merger in early 2010 and has completed about 90% of its integration process.

The integration of Avianca and TACA will be wrapped up this year as the carrier formally joins the Star Alliance, completing two major milestones for the fast-expanding airline group. Several major decisions also loom for the group in 2012 related to its corporate structure, branding and fleet.

Structurally, a decision will likely be made by the end of this year on whether to bring Avianca Brazil into the publicly traded holding company Avianca-TACA. The Brazilian carrier is still owned by the Synergy Group, the holding company controlled by the Efromovich family which also owned Avianca prior to its merger with TACA (the Efromovich family now has a majority share in Avianca-TACA Holding). As a result, Avianca Brazil remains separate although it has a co-branding arrangement with Colombia-based Avianca.

In parallel, a decision will also likely be made this year on whether to have Avianca Brazil join Avianca-TACA in Star. TAM was reluctant to approve its local rival Avianca Brazil as a new Star member in late 2010, when the alliance approved Avianca-TACA. But this will soon no longer be an issue because TAM is expected to switch from Star to oneworld following its merger with LAN, leaving Star without a Brazilian member and eliminating any potential overlap with Avianca Brazil.

All of the carriers within Avianca-TACA are already in the process of joining Star except Ecuador’s AeroGal. Star in late 2010 originally accepted as new members AeroGal along with its sister carriers in Avianca-TACA. But it was later determined too much IT work was required for AeroGal, which Avianca-TACA assumed full ownership of in 2010, to be ready for Star in 2012.

AeroGal has gone through a major transformation over the last year, replacing most of its fleet and systems. The transformation, which was required as AeroGal had been unprofitble, will be complete by about the time Avianca and TACA (including TACA’s subsidiaries in Costa Rica, El Salvador and Peru) formally join Star. Avianca-TACA CEO Fabio Villegas expects AeroGal will be able to begin the process of joining Star later this year as the group will be able to re-direct its alliance efforts to the Ecuadorean carrier. These efforts are now focused on completing the numerous steps required to ensure Avianca and TACA are ready to enter Star in May-2012.

Branding is another looming decision for 2012 as Avianca-TACA continues to contemplate the selection of a single brand. Avianca is expected to ultimately become the umbrella brand for the entire group as it was the larger of the original companies and has a stronger brand when considering the broader Latin America market.

The group, however, may look to salvage at least part of the TACA brand given its strength in the Central American and Peruvian markets. The AeroGal brand may also partially survive in the Ecuadorean market. But the decision to re-brand two years ago in Brazil, from the former OceanAir to Avianca Brazil, would seem to suggest a desire to rebrand everything Avianca.

The decision to consolidate the group’s headquarters at Bogota could be a precursor to the selection of Avianca as a single brand. Originally Avianca-TACA announced it would retain split headquarters, with one office in El Salvador and another in Colombia. Avianca-TACA CEO Fabio Villegas stayed in Bogota while COO Estuardo Ortiz originally remained in San Salvador. But in 2011 Mr Ortiz moved to Bogota along with several Avianca-TACA departments. The remaining departments will likely also shift to Bogota this year although the group will still retain a local presence in San Salvador.

In terms of fleet, the looming decision for 2012 revolves around turboprops. Avianca currently operates an ageing fleet of 10 Fokker 50s in Colombia’s domestic market. Avianca has been pondering replacements for this fleet for a few years and in 2011 issued a new request for proposals.

Mr Villegas told CAPA in November that Avianca prefers to stick with 50-seaters as 70-seat aircraft are too large for most of its regional markets and too close in size to its 100-seaters. (In 2011 Avianca renewed its 100-seat fleet as Fokker 100s were replaced with ex-Mexicana Airbus A318s.) This would rule out new aircraft from Bombardier because the Canadian manufacturer currently only produces the 70-seat Dash 8-Q400. As a result the ATR 42 would be the most likely solution. Another option could be second-hand Dash 8-300s but there are few of the type available and Avianca-TACA would prefer new aircraft.

As part of the same acquisition, Avianca-TACA is also looking at replacing some of its older model ATR 42s that are operated in Central America under the TACA Regional brand. The TACA Regional operation, which consists of several small carriers, now includes five ATR 42s and 10 smaller Cessna Caravans.

Mr Villegas says the new turboprops the group plans to acquire may also be used in the Ecuadorean and Peruvian markets. In Ecuador the group currently only operates A320 family aircraft but previously operated turboprop services through its former Ecuadorean subsidiary VIP. The group’s Peruvian subsidiary currently operates A320s and E190s but could potentially add turboprops for thinner routes as it looks to further grow its share of the Peruvian domestic market.

Other major fleet decisions were already made in 2011, as Avianca-TACA selected the A320neo as its future narrowbody and the A330 freighter as the future aircraft for its cargo airline subsidiary Tampa. Mr Villegas says all four A330-200Fs, which were ordered in Nov-2011, will be delivered in 4Q2012 and primarily be used to replace 767s on routes to the US.

Tampa currently operates four 767-200Fs and one 767-300, all of which will be phased out. The decision to acquire A330s was made partly to streamline the group’s fleet as Avianca has already replaced its 767 passenger aircraft with A330s. Avianca-TACA currently only has one 767 passenger aircraft remaining in the group fleet, which is operated by AeroGal on the Guayaquil-New York route.

The group also now operates seven A330s with three additional passenger A330s on order. It also has 12 787s and 10 A350s on order although the latter are for now still assigned to Synergy rather than Avianca-TACA.

Avianca-TACA has rapidly renewed its fleet with 34 aircraft deliveries occurring in 2011 while 29 ageing aircraft exited the fleet. The group expects to receive another five aircraft in 1Q2012, including three A320s, one A319 and one A330.

Avianca-TACA plans to open Lima as second A330 base

Another key decision for 2012 with fleet as well as network implications will be where to place the additional A330s. Avianca-TACA only currently operates long-haul services out of its Bogota hub but has internally allocated one of its 2013 A330 deliveries to Lima.

The group has been looking at looking at launching services from Lima to Madrid, a route already operated by LAN’s Peruvian affiliate as well as Spanish carriers Iberia and Air Europa. Long-haul services from TACA’s San Salvador hub is another option that has been examined since the merger but Avianca-TACA is now leaning towards making Lima its second long-haul hub.

Mr Villegas says Avianca-TACA was able grow its domestic market share in Peru during 2011 to 8%, driven by the introduction of two E190s. The domestic Peruvian market accounted for 3.2% of the group’s passenger traffic and 1.6% of the group’s revenues in 3Q2011 compared to 0.9% and 0.1% respectively in 3Q2010 (see Background information). Mr Villegas says the group aims to continue growing its domestic market share in Peru.

Competition between LAN and Avianca-TACA expected to intensify

LAN is already Avianca-TACA’s largest competitor in Ecuador, Peru and Colombia (see Background information). The two groups are roughly the same size in Ecuador although both are smaller domestically than local carrier TAME. LAN is larger in Peru but smaller in Colombia, which LAN entered in late 2010 through its acquisition of Aires. LAN’s upcoming merger with TAM will result in even more intense competition between the groups, particularly in Brazil.

LAN and TAM by themselves are already much larger than Avianca-TACA. Once established, the new LAN and TAM parent company, LATAM, will be about four times the size of Avianca-TACA and will control about one third of total capacity in Latin America.

But Avianca-TACA is not too concerned about size. It could have responded to the original LAN-TAM merger announcement from Aug-2010 by pursuing its own further moves. But so far it has been content to focus on integration and the organic growth opportunities which have resulted from the merger.

Avianca and TACA originally identified USD200 million in annual synergies form the merger. As integration is now 90% completed, Mr Villegas is confident this figure will be easily exceeded. “The synergy plan has been very successful,” he tells CAPA. “We’ll be very much above that number.”

Through the first 11 months of 2011, Avianca-TACA’s international passenger traffic was up 12% to 8.6 million passengers while domestic traffic surged by 24% to 10.3 million passengers, boosted in part by the inclusion of AeroGal, which was not counted in the group's figures during 2010. Avianca-TACA is the now largest or second largest carrier in several key Latin American markets that are expected to continue to growing rapidly in 2012 despite the challenging global economic conditions.

Avianca-TACA has effectively positioned itself as one of the leading airline groups in Latin America, which has emerged as one of the world’s most important and most lucrative growth markets. It will never be as nearly big as LAN-TAM, even if some additional strategic acquisitions are pursued. But as Mr Villegas pointed out during the ALTA Airline Leaders Forum in November, “the beauty is not in the size”. 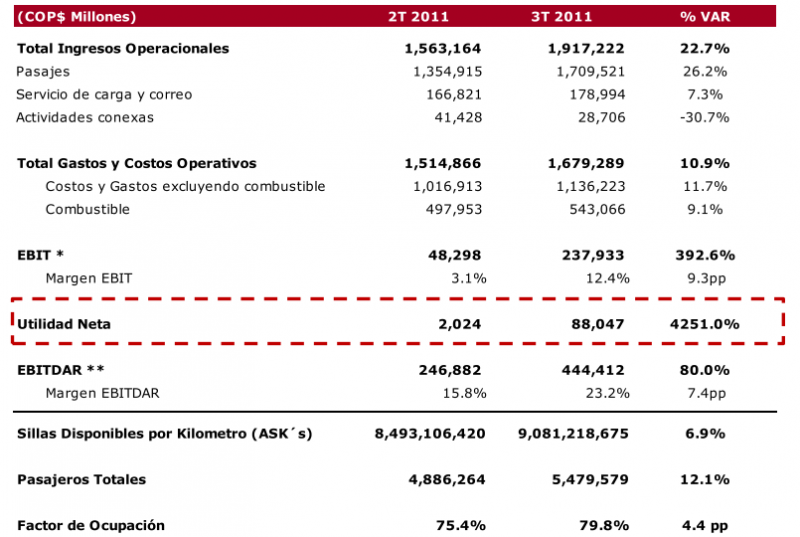 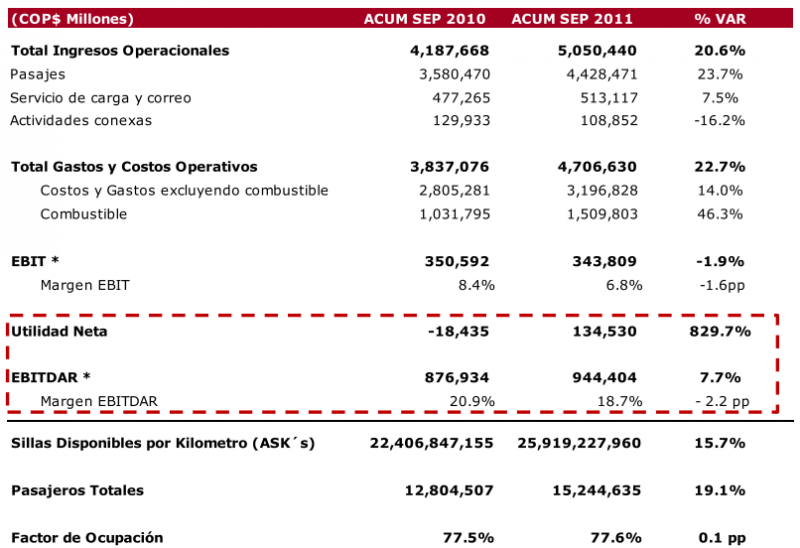 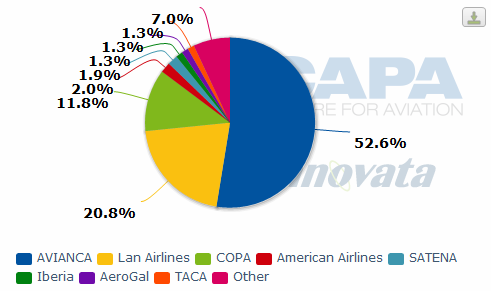 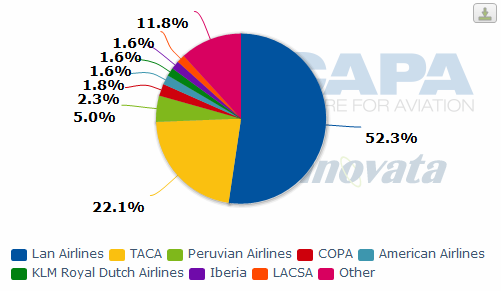 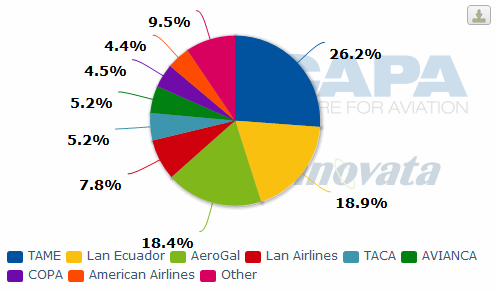