A new interline agreement between India's Jet Airways and low-cost carrier Jetstar is a significant development for the two carriers and their respective markets. Jet Airways on a single ticket will be able to sell across Jetstar's network from Singapore, which predominantly includes points in Southeast and East Asia (where Jet Airways' network is thin) as well as Australia and New Zealand, where traffic flows to India may shift in the short/medium-term as Air India looks to commence direct flights and Virgin Australia works with new alliance partner Singapore Airlines.

The agreement further evolves Jetstar's hybrid model as Jet Airways passengers, like those of select oneworld carriers, will receive checked luggage and, on long-haul flights, meals and comfort kits on Jetstar flights as part of their ticket whereas other passengers have to pay separately. While this adds complexity and some are sceptical of LCCs moving away from a stripped-down model, blurring the lines and adding complexity is rational when yields and network enhancements outweigh the additional cost.

Jet Airways is the largest Indian carrier between India and Southeast Asia, as well as one of the largest after Singapore Airlines, but takes a secondary ranking to Air India when also including East and Northeast Asia. East Asian expansion has been a lower priority for Indian carriers relative to domestic and Gulf growth. In addition to Singapore, Jet Airways serves Bangkok, Hong Kong and Kuala Lumpur. Jetstar is a logical choice for Jet Airways as Qantas already interlines with Jet Airways and Jetstar is the second-largest Southeast Asian LCC (after AirAsia, which has its own network in India). Jetstar has no immediate plans to resume service to India directly. Singapore, Jetstar's hub, is Jet Airways' second largest Southeast Asian destination with 4249 weekly seats (the largest, Bangkok, has 5495 weekly seats).

Jet Airways only links Malaysia, a country with the second highest population of overseas Indians, to India via a daily Chennai-Kuala Lumpur service. The Jet Airways-Jetstar partnership potentially allows Delhi and Mumbai passengers to connect via Singapore rather than Chennai. There are timely onward connections from Singapore to Kuala Lumpur following the arrival of Jet's Delhi and Mumbai flights. Jet's Delhi service will have the greatest number of potential connections from Singapore.

Some additional Southeast Asian destinations could be thin routes whereas the Jetstar interline allows Jetstar to scoop up regional demand and feed it to Jet's primary Southeast Asian points. From Delhi, the interline arrangement opens up access to the two key Indonesian points of Jakarta and Denpasar. Amongst India's 10 largest trading partners, Indonesia together with Australia, are the only two countries which do not have non-stop air services. Indonesia received 168,000 Indian visitors in 2011, all of whom had to travel via an intermediate point.

East and Northeast Asian points would typically require deployment of widebody aircraft, which Indian carriers have been growing at a much slower pace than narrowbodies. Several routes in the region would also be too thin to support direct services. And in markets such as China, where Jetstar is concentrating growth, Jet Airways benefits from not having to invest in a strong local presence and distribution channels as it would if it entered on its own. Jet Airways would also be able to better compete with Singapore Airlines, whose extensive network means it can very effectively and price competitively transfer passengers over its Singapore hub whereas Jet Airways has had to rely on strong local demand, which can be difficult in a price-sensitive VFR and leisure market, especially one in which Southeast Asian LCCs have a notable presence. Jetstar provides Jet Airways with a lower-cost partner and more competitive position.

The agreement for now only covers tickets booked through Jet Airways' distribution channels, but Jetstar still receives exposure to the India outbound market. Full service parent Qantas has announced its withdrawal from Singapore-Mumbai in favour of a partnership with Jet Airways (and notably not Kingfisher Airlines, which planned to join oneworld prior to financial problems).

Australia connections important but secondary, even with Air India looming

Australia connections to India via Jetstar and Jet Airways are important but secondary; Jetstar is eager to build traffic around its Singapore network, which outperforms its Australian business. Jet Airways in Oct-2011 reported a 188% increase in 1H2011 year-on-year bookings out of Australia, with Jet Airways interlining on Qantas between Singapore and Australia. The growth may have compelled Jet Airways to look at how it could stimulate low-end market growth, by offering more competitive fares on lower-cost Jetstar, as well as reach into New Zealand, which has approximately 100,000 overseas Indians, including a large student contingent. Jet Airways did not have a direct interline flight from Asia to New Zealand as Qantas does not serve New Zealand from Asia.

The bigger difference of the Jetstar addition, besides the Auckland flight, is that its Melbourne-Singapore flight (the carrier's sole long-haul Australian flight to Singapore) arrives at 16:45, well-timed to connect with Jet Airways' 19:05 flight to Mumbai, its biggest hub (about 60% larger than Delhi based on total seats). Likewise, the Auckland flight arrives at 17:20 and is also well positioned to transfer traffic. Qantas' long-haul flights primarily arrive after 19:00, eliminating the chance of same-day connections to India on partner carriers. 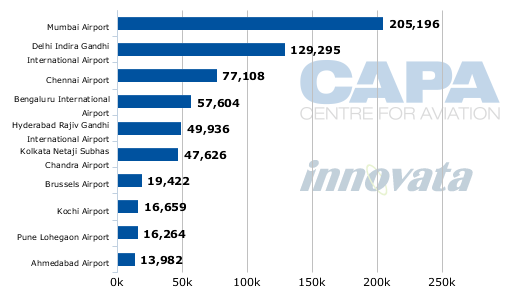 While Qantas' plans for a premium Asia-based carrier have waned in recent months, a cornerstone of the carrier's proposition would be to provide scheduling enhancements over Qantas. "Up until now our flying has been predicated on the best connecting times to Europe. So instead of convenient day time services, we have late night arrivals into Singapore. This means that business customers can't make same day connections into the many Asian cities which are developing fast," Qantas CEO Alan Joyce said in Oct-2011.

The partnership also reflects Jetstar leveraging its Asian hub to form partnerships Qantas cannot, partially underscoring the strategy for Qantas' planned premium carrier. Jetstar is leading the Qantas Group's position in Asia, as well as how LCCs can work beneficially with full-service carriers.

In partnering with Jetstar, Jet Airways may be building a more competitive price advantage for itself as Air India reaffirms its intention to enter the Australian market, a route that if and when launched will cut journey times from Delhi in particular.

Air India this month affirmed its intention to serve Australia, a plan first announced in Jun-2010 but which has since been delayed several times due to its own internal financial challenges and delays to the delivery of Boeing 787 equipment which it plans to deploy on the route. Although Air India has announced a time frame on the Australian service – launching it between Oct-2012 and Jan-2013 – the certainty of that date being realised is unclear given continued questions over its fleet expansion plans and indeed the carrier's overall future strategic direction. The launch of a route to Australia, although undoubtedly a clear commercial objective of the airline, is in the larger scheme of things a relatively low priority for an airline that is struggling to establish a viable business model.

Jetstar introduces more complexity, but benefits can justify it

As eager as hybrid airlines like Jetstar are in extending their business in the pursuit of higher returns, many still warn against LCCs becoming involved in agreements that add cost and complexity. However, this must be measured against the potential growth in revenue, and for Jetstar the opportunity to achieve low-risk access to the large and growing Indian outbound market is tremendous. Its regional competitor AirAsia has built a solid base of VFR and leisure focussed flights from Malaysia to South Asia, but forays into Mumbai and New Delhi from long-haul subsidiary AirAsia X were unsuccessful and are being withdrawn. AirAsia X was hurt by weak distribution in the Mumbai and New Delhi markets where VFR traffic is low. Jetstar will not have to worry about that while Jet Airways can further set itself apart in Southeast Asia as the leading Indian carrier with the ability to generate feed from thinner points that could not support direct Indian flights.