A further weakening of air travel and freight markets in the months ahead looks likely, according to IATA, which reported a further softening of global air traffic demand in Nov-2011 amid continued weakness in the global economy. IATA, in its Nov-2011 Air Transportation Market Analysis, added that air cargo markets have contracted by around 4% from Jan-2010 levels, compared to growth of around 2% in passenger markets.

However, IATA director general and CEO Tony Tyler noted that despite this relative growth in the passenger markets, “the trend has been both soft and volatile” and “continuing economic uncertainty will likely mean market shortcomings deepening as we enter 2012”. Business confidence, as represented by the Purchasing Managers’ Index, is also persisting at levels that signal contraction, indicating further weakness ahead. 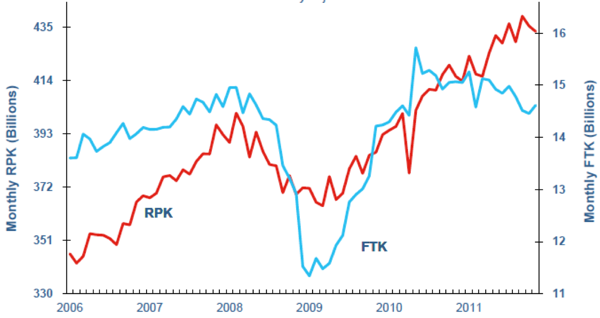 Worldwide growth in air travel and business confidence: 2006 to 2011 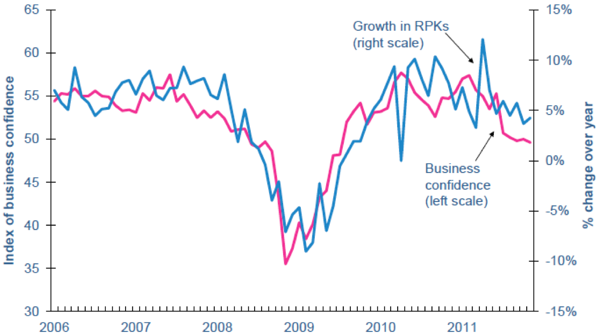 In Nov-2011, total market passenger traffic weakened 0.5% on a month-on-month basis in Nov-2011 (seasonally adjusted) as a result of weak international markets, but has increased 4.3% year-on-year from weak Nov-2010 levels. 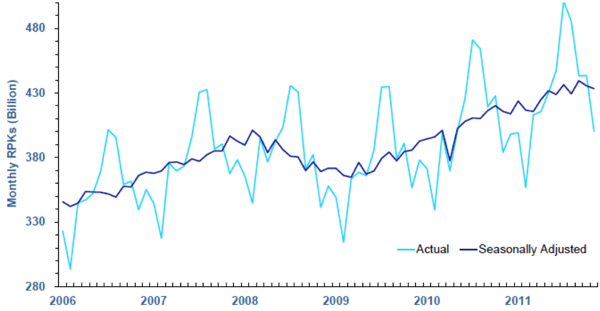 The month-on-month declines occurred despite growth in Latin America and Middle East markets, which was counteracted by weakened demand in Europe and the US. The US market has shown the weakest growth, but the region's increasingly high load factors reflect the constrained capacity measures that are restoring profitability to the region, as noted in the IATA Financial Forecast in Dec-2011.

Globally, passenger load factors have fallen sharply in Nov-2011, from 78.5% in Oct-2011 to 76.3% in Nov-2011 indicating the “weakness in passenger demand is outpacing airlines’ ability to adjust capacity accordingly”, IATA said. 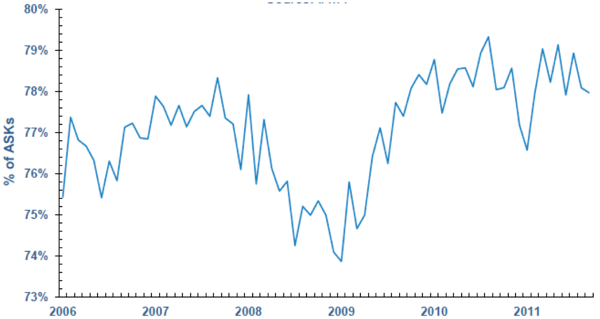 Regional differences were again sharp in Nov-2011. While North American carriers saw a 0.8% decline in travel, carriers in the Middle East experienced a 10.1% increase, followed by 9.0% for Latin American airlines. 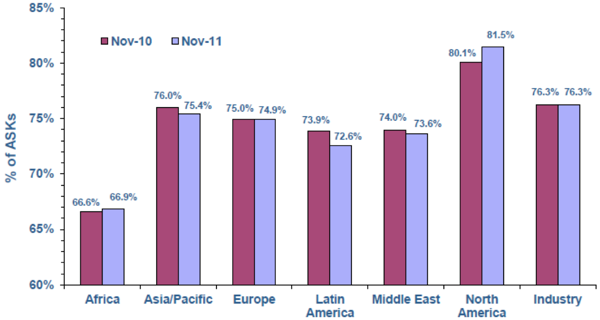 International travel markets continue to be weaker than domestic markets

International travel markets continued to be weaker than domestic markets in Nov-2011, with a 1.5% contraction from Oct-2011 levels, compared to growth of 1.3% in domestic demand. 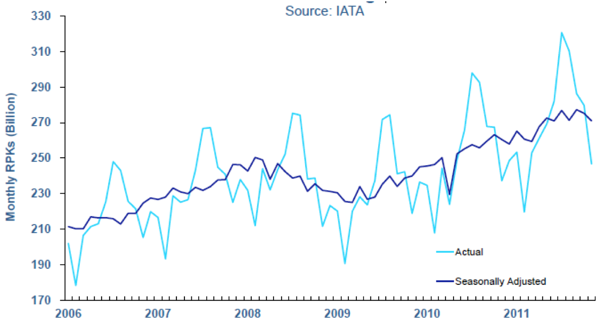 International traffic has increased by only 0.5% since May-2011, due to mixed performance across the globe. “Africa, the Middle East and Latin America showed good performance over the period, with their respective economies maintaining momentum and supporting trade activity. Weak business and consumer confidence have made travellers in Europe and North America relatively more reluctant to fly, containing the performance of international travel overall,” IATA noted. 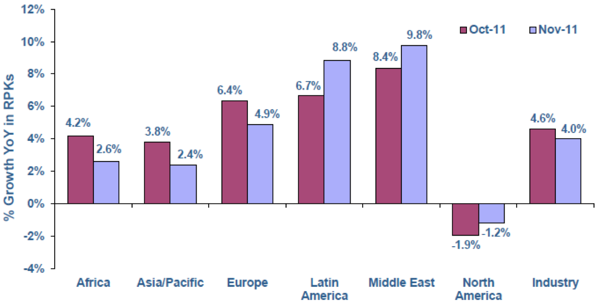 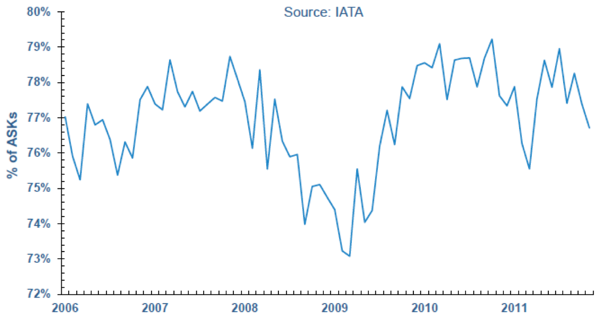 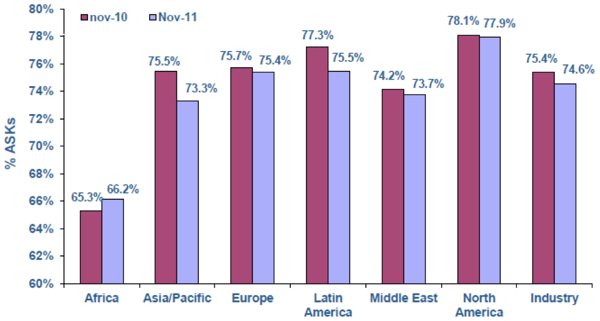 Domestic traffic, meanwhile, was stronger than in international markets in Nov-2011, IATA said. Overall domestic traffic increased 4.7% year-on-year growth in Nov-2011, and has been improving in the past six months. Load factors, meanwhile, average 79.2% in domestic markets in Nov-2011, a 0.8 ppt increase. Domestic load factors are still low in Japan at around 65.4%, hampering a recovery in profitability. China, by contrast, had a strong load factor of 80.7%, which will undoubtedly “help local airlines continue to generate good profits”. US airlines continue to show the strongest load factors. 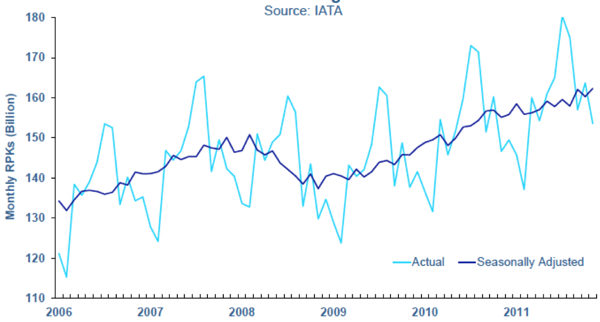 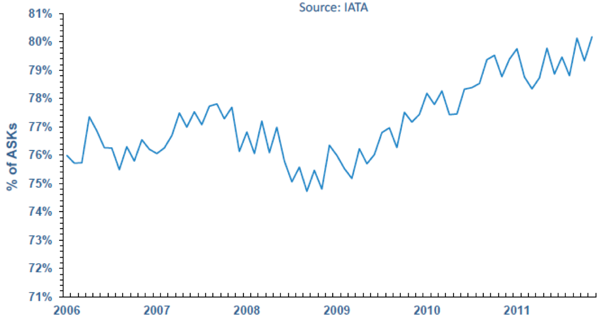 On one side of the equation, US domestic demand fell by 0.8% year-on-year, outpaced by a 3.4% reduction in capacity, resulting in the strongest regional load factor of 83.4%, which helped improve profitability. This cautious capacity approach trend has been evident for some time in the US market and is expected to continue in 2012 amid an environment of consolidation and restructuring activity.

Brazil, meanwhile, recorded 9.4% year-on-year growth in demand which was relatively in line with the 10.3% increase in capacity.   TAM CEO Libano Barroso told CAPA at the recent ALTA Airline Leaders Forum in Brazil that final 2011 ANAC Brazilian domestic figures will likely show growth of about 15%. Mr Barroso expects Brazil’s overall domestic passenger market (RPKs) to grow between 8% and 12% in 2012, down from the 23% growth recorded in 2010 and the 19% growth reported through the first three quarters of 2011. Growth in the current quarter, however, has started to slow, partially driven by an increase in fares on most major domestic routes. 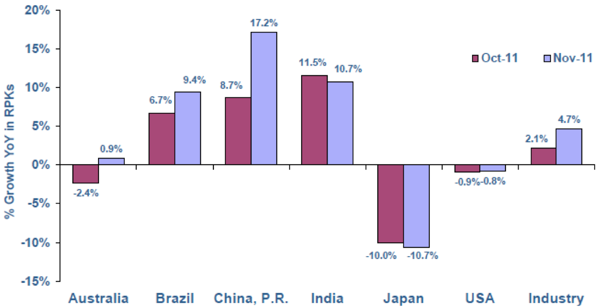 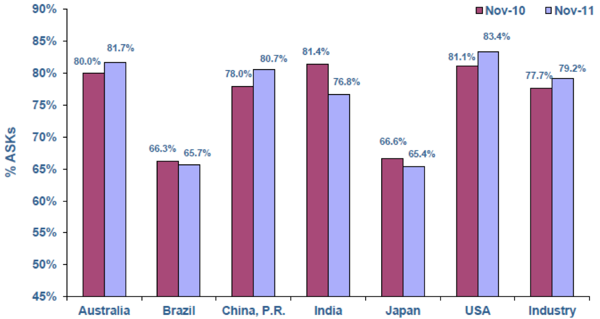 Chinese domestic demand showed “notable strength” with the most robust year-on-year growth of 17.2% (off a weak Nov-2010), exceeding the 13.3% growth in capacity.

However, China's air transport industry has entered a stage of slower growth, registering single-digit total air traffic of growth in 2011, according to CAAC.  Growth has weakened in 2011 after a banner year of recovery in 2010 following the downturn in 2008/09. 2011's passenger figures have been well below expectation, particularly since the middle of the year. According to CAAC, Chinese carriers will handle 290 million passengers in FY2011, an 8.2% year-on-year increase. A 2% decline in cargo volumes to 5.5 million tones is forecast. In FY2012, passenger growth of 10% is expected, for full year passenger traffic of 320 million. Cargo growth of 4.7% is expected to 5.8 million tonnes.

India has also seen continued expansion, with domestic growth of 10.7%, although this was well below the 17.3% expansion in capacity. While growth has slowed from the 17-22% rates seen since Jun-2011, growth is expected to continue despite the current financial challenges experienced by key players in the Indian aviation market.

Meanwhile, growth has failed to translate into profits for India's airline industry, where all the major carriers except IndiGo are believed to be loss-making, as a result of the impact of high jet fuel costs and an inability to raise fares in a competitive market. CAPA estimates Indian carriers combined will lose USD2.5 billion in the 12 months ending 31-Mar-2012.

Also in the region, the overall post-earthquake and tsunami recovery in the Japanese market stagnated in Nov-2011, with traffic still around 10% below pre-earthquake levels, despite a 9% capacity reduction. Not all carriers and markets are recovering at the same pace; ANA and Qantas, for example, have previously reported full recoveries.

As echoed by airlines and economists around the world in recent months, the outlook for 2012 is uncertain, with weakness to continue in the first quarter of the New Year. This situation reflects continued weakness in business and consumer confidence and economic concerns in the euro zone, foreshadowing the softening in passenger markets and the uncertainty in passenger markets as we enter 2012.

This continued weakness was foreshadowed upon the release of the association's financial forecast in Dec-2011, which forecast that global airline profitability would be sharply lower than previously forecast in 2012. IATA downgraded its ‘best case’ 2012 profit by 29% from USD4.9 billion, as forecast in Sep-2011, to USD3.5 billion for a net profit margin of just 0.6%, down from the previous forecast of 1.2%. The USD1.4 billion downgrade, which highlights the continued profitability challenge facing the world’s airline industry, will see global airlines report at best a 49% year-on-year reduction in net profitability from forecast profit levels of USD6.9 billion in 2011. 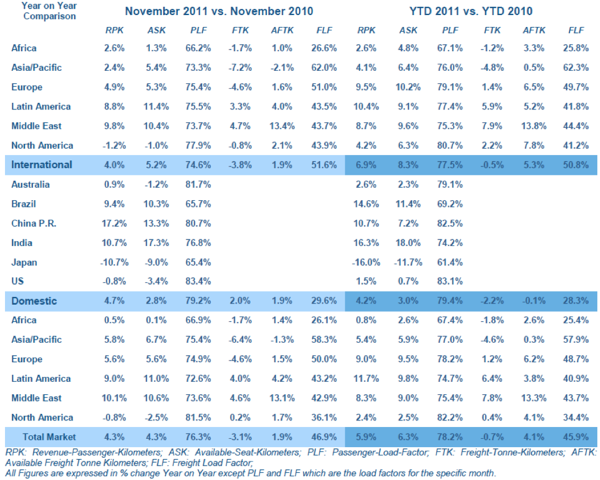 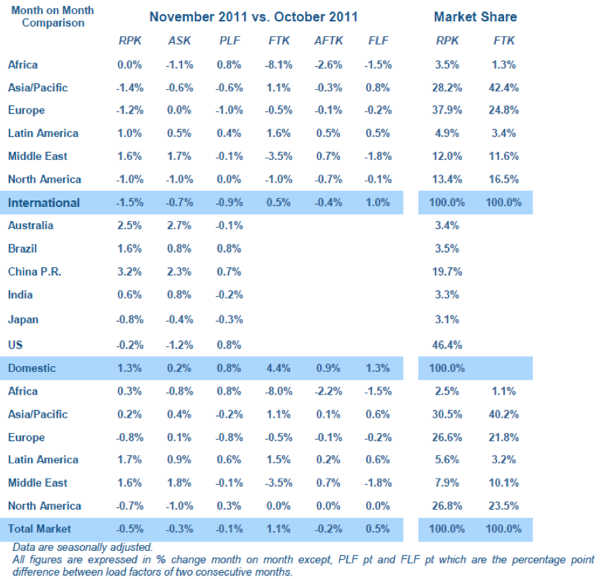