India’s domestic aviation traffic posted double digit growth of 11.1% in Nov-2011 to reach 5.4 million passengers for the month. Growth has slowed from the 17-22% rates seen since Jun-2011, however India remains one of the fastest growing domestic markets in the world, with growth expected to continue despite the current financial challenges experienced by key players in the Indian aviation market. 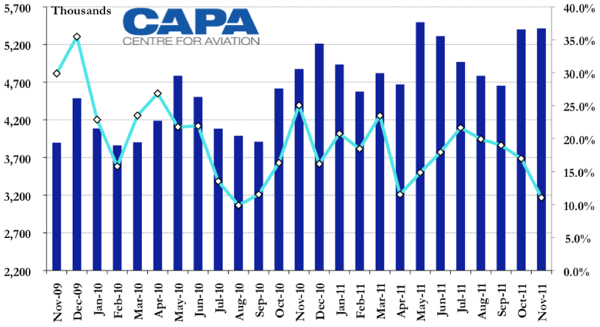 However, growth has failed to translate into profits for India's airline industry, where all the major carriers except IndiGo are believed to be loss-making, as a result of the impact of high jet fuel costs and an inability to raise fares in a competitive market. CAPA estimates Indian carriers combined will lose USD2.5 billion in the 12 months ending 31-Mar-2012. This is on total revenues of just under USD10 billion – a worse result than even FY2008/09, when traffic was declining and fuel prices spiked at USD150/barrel. In the domestic market, India’s airlines lose USD25-30 every time a passenger boards an aircraft.

The nation’s airlines and associations, as well as IATA, have warned that infrastructure and taxation represent key challenges for the industry. Other concerns impacting airlines in the market include a highly competitive domestic market characterised by aggressive and, at times, predatory pricing, which has resulted in an unsustainable yield-cost imbalance. High fuel costs and rising debt levels are also having a negative impact on margins. Meanwhile, a depreciating rupee is leading to increased payments for fuel and aircraft rentals.

Associated Chambers of Commerce and Industry of India (Assocham) secretary general, D S Rawat, at the end of Dec-2011 stated changes are required to improve the profitability and functions of the civil aviation sector in India, with the association preparing an eight-point strategy for the Indian aviation sector. Assocham has suggested "opening foreign direct investment [FDI] by international airlines to bring in capital and technological expertise, allowing easier access to global routes by Indian carriers for increasing their yields (and) enhancing air traffic management infrastructure". The association also suggested a lowering of sales tax on jet fuel, upgrades to airport infrastructure, the development of an infrastructure fund to construct airports in Tier II/III cities and improved access to global routes.

While IndiGo and Jet Airways were the largest carriers in the domestic market in Nov-2011, Kingfisher Airlines fell to fifth place in domestic market share during the month, from third in Oct-11. The airline, which was already trailing behind Jet Airways and IndiGo, lost market share to Air India and SpiceJet in Nov-2011, with Kingfisher Airlines passenger numbers declining to a three-year low of 760,000. The carrier, which was until the end of Sep-2011 the second largest carrier in the domestic market, is now the second smallest, behind only GoAir.

The decline occurred after the cash-strapped carrier grounded aircraft and cut routes, resulting in significant capacity reductions in the month. With continued service cancellations, Kingfisher will likely continue to see passenger number and market share losses in the coming months.

Jet Airways, including its unit JetLite, had the largest market share of 27.1% in Nov-2011. Jet Airways is the largest beneficiary of the developments at Kingfisher Airlines, as it has also been able to increase its corporate travel market share. Most carriers saw double-digit yield growth in Nov-2011, with Air India reporting 10% yield growth and a 12.3% increase in passenger revenue in the month. 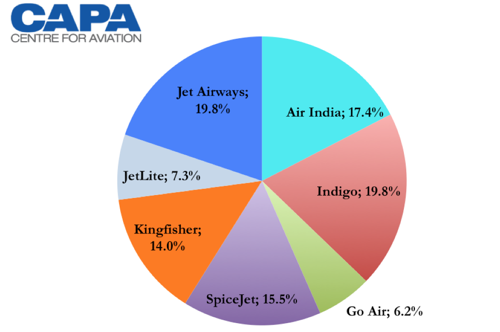 Up until recently, IndiGo and Kingfisher had been almost neck-to-neck in the marketshare race, both holding around an 18% market share. However, with IndiGo adding capacity and operating with high load factors, it has now surpassed Kingfisher which is cutting flights. Kingfisher is unlikely to recover lost ground in coming months as cancellations at the loss-making carrier continue over the next few months. Kingfisher will ground its A320 aircraft on a rolling basis for cabin reconfiguration after the airline decided to exit its low-cost business, Kingfisher Red. The carrier has also cancelled some unprofitable routes due to heavy losses and large debt levels.

The most dramatic passenger growth in Nov-2011 was, as is generally the case, witnessed by the LCCs, driven by SpiceJet and IndiGo with surging growth of around 39% and 27%, respectively, based on CAPA calculations. JetLite (+15.2%) also reported double-digit passenger growth of above 15% in the month. 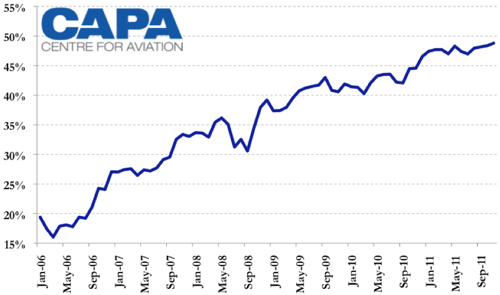 The month of Nov-2011 witnessed a continued increase in seat factor as compared to Oct-2011 levels despite the Kingfisher effect and due to the ongoing peak season. IndiGo, in addition to being one of the largest and fastest growing domestic carriers, reported the highest domestic load factor in Nov-2011 at 88.7%, to be the only carrier with load factors of above 80% in the domestic market in the month. All carriers reported load factors of above 75% in the month. 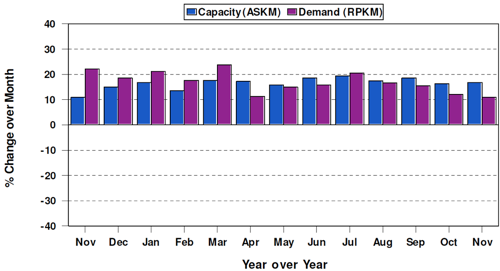 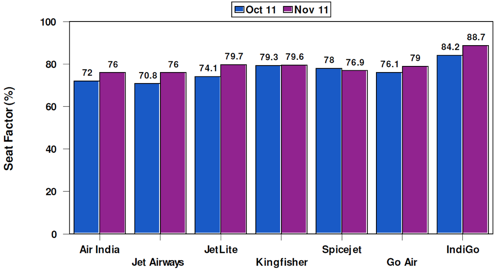 The Indian Ministry of Civil Aviation also separately reported an on-time performance (OTP) rate of 85.1% for domestic scheduled carriers in Nov-2011. Kingfisher Airlines reported the best OTP rate of 91.9%, with Jet Airways reporting OTP rates of 90% or above. Air India again had the worse OTP rate at 65.6% 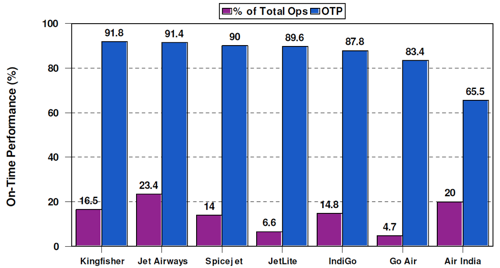 Reasons for delays in Nov-2011 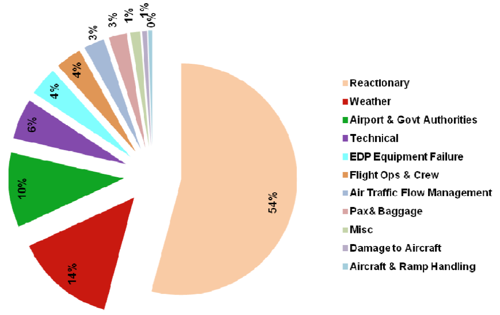 India's domestic aviation market expansion has been the strongest in the world, tripling in the past five years, according to IATA, to become the ninth largest aviation market in the world. Given the strong market fundamentals, the robust rate of growth is expected to continue with the Indian Ministry of Civil Aviation’s Vision 2020 statement envisaging a compound annual growth rate of around 15% in the next five years. However, growth is not without its pains, with CAPA noting that Indian aviation enters 2012 facing its most critical challenges since the advent of the 2004 industry reforms. The key challenge going forward, amid an environment of slowing GDP growth, will be to ensure yields and profitability are maintained. At the same time, the nation’s full service carriers continue to suffer under the burden of approximately USD16 billion in debt, ensuring financial recovery will be slow in India’s aviation market.