IATA has unusually provided two forecast scenarios for 2012 – a ‘central forecast’ and ‘banking crisis’ forecast – or perhaps more accurately, the ‘bad’ and ‘worse’ forecasts. Both show that global airline profitability is expected to be sharply lower than previously forecast. IATA is downgrading its ‘best case’ 2012 profit by 29% from USD4.9 billion, as forecast in Sep-2011, to USD3.5 billion for a net profit margin of just 0.6%, down from the previous forecast of 1.2%. The USD1.4 billion downgrade, which highlights the continued profitability challenge facing the world’s airline industry, will see global airlines report at best a 49% year-on-year reduction in net profitability from forecast profit levels of USD6.9 billion in 2011.

The reduction reflects the risk of recession in Europe and slower global economic growth, with IATA warning the industry could face a loss of USD8.3 billion if the euro zone crisis becomes a full-blown banking crisis. This ‘banking crisis’ forecast foresees every region having a net loss in 2012 while the ‘central forecast’ sees only Europe and Africa reporting net losses in the year. Meanwhile, the profitability forecast for 2011 remains unchanged, at USD6.9 billion for a weak net margin of 1.2%.

While this forecast remains unchanged, IATA director general and CEO Tony Tyler noted “regional differences have widened, reflecting the very different economic environments facing airlines in different parts of the world”. Mr Tyler commented that “the biggest risk facing airline profitability over the next year is the economic turmoil that would result from a failure of governments to resolve the Eurozone sovereign debt crisis. Such an outcome could lead to losses of over USD8 billion – the largest since the 2008 financial crisis”.

The most pressured airlines in 2012 will be European airlines, according to IATA, which believes it is “unlikely that Europe will avoid a brief recession”. All regions are, however, expected to show profit deterioration from 2011 levels, although there will be a “marked divergence” of financial performance between regions. Contrasting performances are shown by North American airlines, where capacity cuts are providing some protection to profitability, and in Asia where IATA is forecasting “significant profits” generated by high load factors on China’s expanding domestic market. 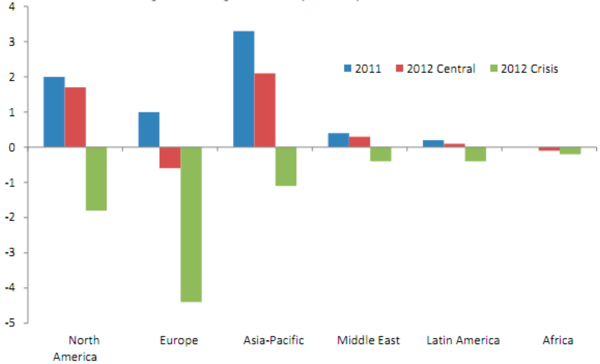 Fuel cost estimates are relatively unchanged from the previous forecast at USD198 billion based on oil at USD99 per barrel (against a previous forecast of USD100/barrel). Overall cost increases are expected to increase by 4.5% to USD609 million, outpacing the forecast industry revenue growth of 3.7% to USD618 billion.

Losses of up to USD8.3 billion if euro zone crisis deteriorates to renewed banking crisis

The outlook worsens based on the ‘banking crisis’ forecast, which Mr Tyler stated is the “worst-case – but by no means unimaginable – scenario”. Based on this scenario, IATA estimates global aviation industry losses could reach USD8.3 billion, with a net margin of minus 1.4%, with losses across all regions. European carriers would contribute over half of the losses under this scenario. At an EBIT level under the banking crisis forecast, only North America and Asia Pacific would post small profits.

OECD scenario of the economic effects of a banking crisis 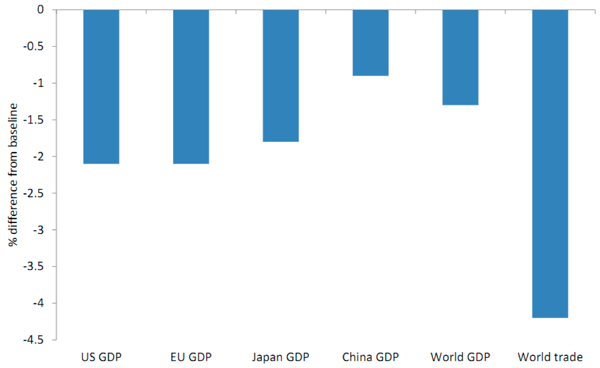 In the ‘banking crisis’ scenario, airlines would likely see growth in passenger demand “grind to a halt” and a 4.7% contraction in cargo markets. Both passenger and cargo yields would decline by 1.5%. The silver lining would be the likely relief in the fuel price. Based on oil at USD85 per barrel, the fuel bill would be USD183 billion, consuming 31% of costs. However, overall expenses would be expected to grow by 1.9% (compared to 2011) to USD592 billion. Revenues would see a fall of 1.3% (compared to 2011) to USD589 billion.

The IATA global forecast for 2011 is unchanged at USD6.9 billion, with IATA noting that financial performance is “still reasonably good” as at 3Q2011 after peaking in 3Q2010. During 3Q2011, EBITDA in the three largest regions stood at between 5% and 10% and cash flows had “more or less stabilised” after pressures in 4Q2010 and 1Q2011, IATA said. 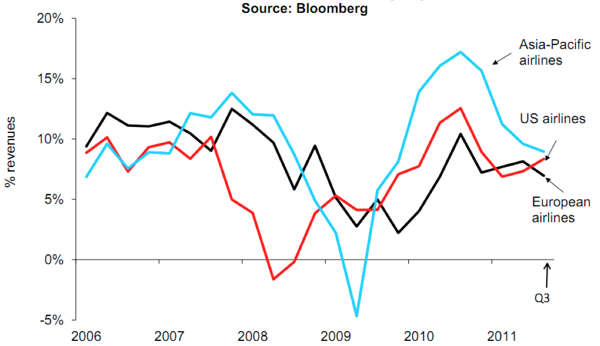 While the overall global profit remains unchanged, every region with the exception of Africa has seen a change in profitability forecasts. North America and Asia Pacific has seen an upward forecast, while Europe, Latin America and the Middle East have witnessed a downward revision.

At the global level, passenger demand is expected to expand by 6.1%, stronger than the 5.9% forecast in the previous forecast from Sep-2011, as air travel growth continues at a stronger pace than previously expected. This robust air travel demand has occurred despite weakening business and consumer confidence in Europe and US, although the outlook is expected to weaken.

The demand strength, along with tight capacity management (particularly in North America) has kept load factors high and is supporting a 4.0% increase in yields. Simultaneously, airlines have generally been able to increase breakeven load factors, through yield improvements and reductions to non-fuel unit costs. As well as stabilising breakeven load factors on passenger markets up until 3Q2011, airlines have also maintained high aircraft utilisation. 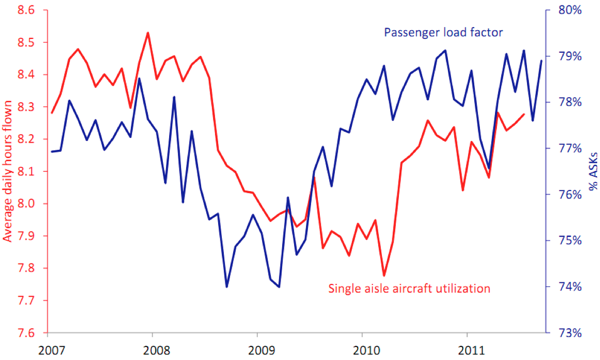 These factors have helped a modest increase in forecast revenues, despite the weaker-than-expected cargo performance and higher-than-anticipated oil prices, with revenue forecast at USD596 billion in 2011. IATA is forecasting a 0.5% contraction in cargo volumes and flat yields in 2011, while the 2011 fuel bill is expected to increase by USD2 billion from previous forecasts, at USD178 billion, with oil prices averaging USD112/barrel.

While demand has held up, freight markets have been declining since mid-2011, with declines of 5% between May-2011 and Oct-2011, reflecting declining world trade and business confidence. 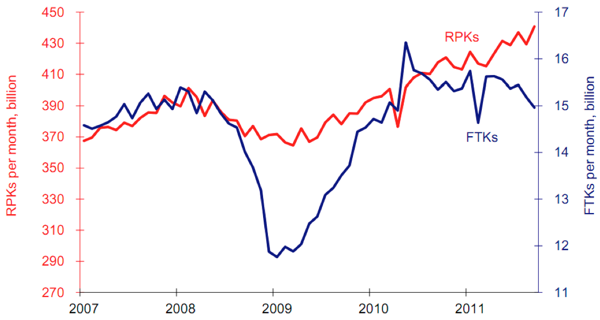 Mr Tyler stated the challenging conditions will likely benefit LCCs. He commented that Asian LCCs, in particular, have successfully demonstrated their ability to succeed in difficult environments through lower costs and increased efficiency. At the same time, he said the traditional carriers have also been showing good revenues through their own efforts. "They have been successful in their own corners," he said, adding that enlightened government policies and the entrepreneurial drive among Asian carriers had also helped to bring about positive results.

Aviation industry to remain in ‘normal state of crisis’ in 2012

The IATA outlook for 2012 highlights that achieving traffic growth and profitability are two different stories, with profitability remaining and continuing are often elusive challenge for the industry. This has prompted Mr Tyler to note that the “normal state of aviation is crisis and once in a while we have a few consecutive months of benign conditions”. He added that “this industry is all about turnover with very little leftover”. Assuming the IATA ‘central 2012’ scenario is correct, the airline industry will have lost since 2001 over USD26 billion on revenues of USD5.5 trillion. Over the last 40 years, airlines have been in the black but with a weak 0.3% margin.

In 2012, European carriers will face the most difficulties, although the overall picture of the industry remains precarious. The exact outlook for 2012 remains highly dependent on the problems of debt and competitiveness in the euro zone, IATA said. At the best case scenario, the “world would remain ‘two-speed’ and this would lead to a divergence of financial performance between airlines in Europe, exposed to weak home markets, and those in other regions, with a greater exposure to growth markets”.

IATA's chief economist Brian Pearce, meanwhile, stated that in the worse-case scenario, cash reserves held by the carriers would allow them to survive three months of sustained losses. “The average cash balance is about 20 percent of annual costs and annual revenues, so if they’ve got negative revenues and outflows, that would last a quarter,” Mr Pearce said. 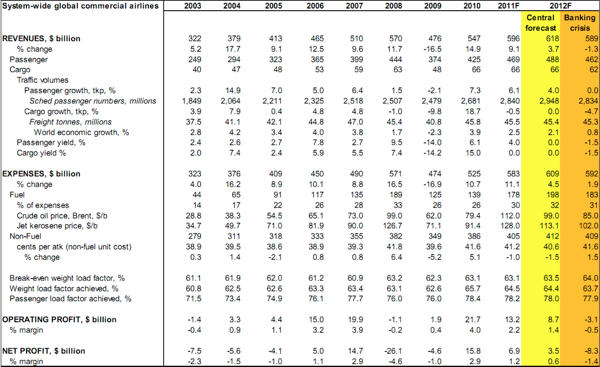