Gulf carriers and Turkish Airlines ready to expand in China, if only air rights were available

For all their success elsewhere, the Gulf carriers and Turkish Airlines are looking rather thin in China. This is not by their choosing. Emirates, Etihad, Qatar and Turkish have reached the limit of air rights and slots made available to them.

All are ready to expand, and Turkish has even said it has service to five cities ready to launch if approved. That is probably of little comfort to China. While the country wants a flourishing aviation market, it also wants its airlines to have a fair share. But this is not classic protectionism. The argument is Chinese carriers are still young and need time to gain experience before being on equal footing with peers.

Yet Etihad and Qatar are younger than China’s long-haul airlines. With a mindset change that favours liberalisation in China being unlikely in the medium term, the foreign carriers will have to find ways to stress their value and why they should receive more air rights. Partnerships are one such answer.

While Turkish Airlines is not in the Gulf region and has a sizeable domestic market, it has many similarities to Emirates, Etihad and Qatar in terms of both geography and strategy. It also faces similar, if quieter, hurdles: regulatory access to secondary cities has been difficult.

Emirates’ size is perhaps distorted by its use of A380s and 777-300ERs whereas other carriers are typically relying more on smaller capacity aircraft. It is common to deploy the largest type (typically 777-300ER) to Beijing and Shanghai, although Etihad only uses A330s to China (and not its A340s or 777s) while Qatar serves Beijing with A330s. The distortion is partially evidenced by Emirates having 35 weekly frequencies to China compared to Qatar's current 27, or 31 with effect from 20-Dec-2013.

Emirates is also using larger aircraft because it has more traffic rights in the prime cities of Beijing and Shanghai. It is the only carrier of the four to have a double daily service to either. The thinner nature of secondary Chinese cities makes them appropriate for smaller aircraft.

Emirates’ position is enviable not just from a sheer size perspective: having double daily service from Beijing and Shanghai is an advantage.

While there are the typical advantages of higher frequency and more options to match with connecting flights, Beijing and Shanghai are the two key markets and are financially strong. They have strong premium traffic and inbound and outbound flows, whereas secondary cities begin to rely on group sales for leisure passengers. Emirates has a daily flight to Guangzhou, which is not as strong for premium traffic. Overflow traffic could operate out of Hong Kong, where Emirates has multiple daily flights.

Emirates differs from Etihad and Qatar in that it does not serve secondary cities. Given a limitation on traffic rights and needing to choose between secondary cities and concentrating capacity in Beijing, Guangzhou and Shanghai, the latter is preferred.

Emirates is somewhat advantaged given its earlier entry than peers: Emirates commenced Shanghai services in 2004 but Etihad did not start until 2012. But Emirates has not always been the first mover: Qatar has served Shanghai since 2003, a year earlier than Emirates. Qatar started Beijing services in 2004 but Emirates not until 2006. So at play is a combination of first moves (but not exclusively) and seizing opportunities, air rights permitting. Any weak performance by entering or increasing capacity too early (but securing slots) would have been compensated as the market now grows without an increase in slots. These earlier entry dates occurred when slots and air space were available, and perhaps when there was less suspicion on the carrier “stealing” traffic, as the claim goes.

Qatar serves more Chinese cities than any other non-Asian airline

Qatar is using its 31 weekly flights – slightly lower than Emirates’ allotment – differently to Emirates. This is less by choice than necessity as the prime cities Qatar would like to add services to are congested. This is not to discount secondary cities, but they are very different markets and not as lucrative as Beijing and Shanghai. The entry of some carriers into secondary cities has largely been made possible with local government support.

Once Qatar adds service to Hangzhou, as it is due to do in Dec-2013, it will have the distinction of serving more Chinese cities than any other non-Asian airline. The previous holders of this claim were Air France and Lufthansa.

See related report: Qatar Airways to launch Hangzhou, a worthwhile alternative to Shanghai & with its own local market

Etihad’s only secondary city is Chengdu while Turkish, like Emirates, does not serve any secondary cities. Secondary cities have become popular with European carriers, notably Air France, KLM and Lufthansa. British Airways in Sep-2013 joined the trend with a London Heathrow-Chengdu service. 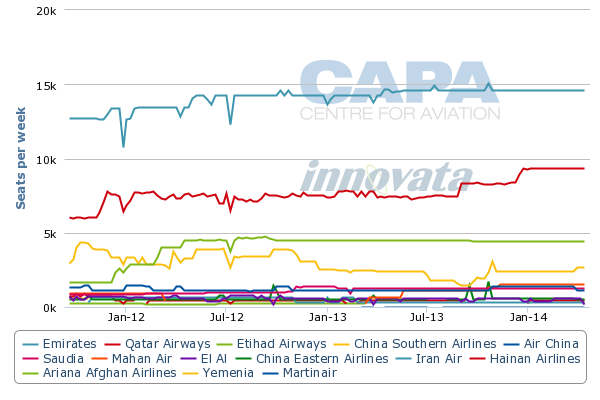 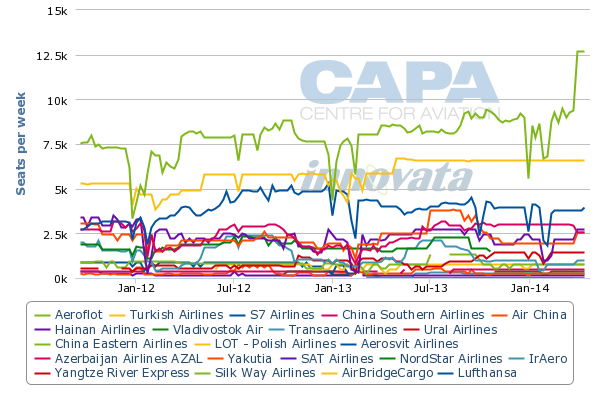 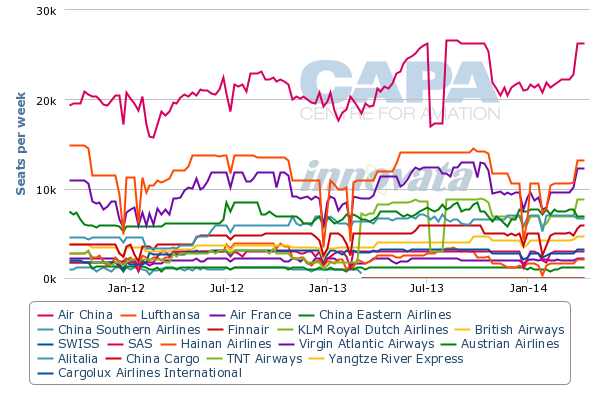 Secondary Chinese cities are natural fit for the Gulf airlines

Demand in secondary cities may be strong for a larger number of points, but not enough for non-stop service. And demand is far greater than the number of one-stop options Air China, China Eastern, China Southern and Hainan Airlines can offer – and that will probably always be the case. Also, for example, flying from Chengdu to Europe via a coastal hub (Beijing, Guangzhou or Shanghai) entails significant backtracking.

China-Africa passenger numbers are expected to significantly grow, albeit from a low base, and for now the Gulf carriers seem best to capitalise on this market.

There are caveats. The large Europe-North Asia market is more effectively served via Europe as routing south to Istanbul or the Gulf and then back north becomes inefficient – although this is less a factor for passengers if the price, schedule and service are right, as has been well demonstrated by now. (However, this may be more inefficient in some markets than transiting in the Gulf or Istanbul.)

One of the most efficient hubs from Europe to North Asia is Finnair’s base at Helsinki, which is often on the flight route between Europe and North Asia.

On the other hand, secondary cities in China’s west mean shorter deviations. Western cities are also where manufacturing is increasingly moving, so cargo opportunities are not insignificant.

The secondary cities are largely outbound markets, unlike Beijing and Shanghai where inbound traffic is more present. That also takes away premium traffic, as the outbound Chinese premium market is nascent but growing. Some airlines are of the view that long-haul services to secondary cities will not be viable on their own for years – maybe not even this decade.

Traffic rights restrained for Turkish and the Gulf airlines

Further expansion for the Gulf carriers and Turkish Airlines will be challenging. Turkish Airlines in 2012 said it was ready to launch service to five new Chinese cities if the traffic rights were made available. Qatar’s entry into Hangzhou will fully use the bilateral that was expanded in Mar-2013.

Emirates and Etihad had been limited but in Aug-2013 China agreed to expand the bilateral with the UAE. But the expansion consisted of cities such as Haikou and Yinchuan, which are unlikely to see passenger service in the medium term. Dragonair, the largest foreign carrier in China and seen as an innovator, commenced Haikou services only in 2012 while Yinchuan only in Oct-2013 saw scheduled service to Seoul Incheon with two-weekly Jin Air services. In short, the bilateral expansion was stronger on promoting an image of progress than making progress.

The constraint is effectively protectionism. But it has a different flavour than that experienced by the Gulf carriers and Turkish Airlines in Europe, amongst other markets. The concern in China is that its airlines are young and inexperienced, so not on an equal footing with foreign peers who could more readily take traffic. So the carriers are restricted, although done so through various explanations like constrained slots and airspace, which are sometimes but not always valid.

The basic facts are true, but the connotations debatable. Etihad turns 10 in Nov-2013, making it younger than Air China, China Eastern or China Southern by some years. Qatar first flew in 1994. Emirates pre-dates China's Big 3 but not by much, having first flown in 1985. Age alone does not determine experience. The Gulf carriers out-shined their European counterparts on service. European carriers have tried to argue the Gulf carriers receive subsidies, but many aspects of an airline are the result of brains, not wallets, and the Gulf carriers are very strategic, as their once enemies in Europe are now acknowledging.

Could Chinese carriers ever be more formidable than Gulf ones? In some aspects perhaps, but there are other areas where Gulf carriers have a fundamental advantage that would prove challenging for Chinese airlines to overtake. Gulf carriers and Turkish Airlines will always need more capacity to China than Chinese carriers to the Gulf or Turkey. What will need to be watched is if China unfurls the welcome mat for the Gulf carriers and Turkish Airlines once Chinese airlines are seen to be on an equal footing. The evidence from other countries is no, but China may prove different on its own or through trade pressure.

Gulf, Istanbul hubs would be good fit for Chinese airlines

The Gulf carriers and Turkish Airlines do not need to be antagonistic with Chinese carriers. In fact, some could be very complementary to each other. Turkish Airlines hopes Air China will serve its Istanbul hub, where besides gaining local traffic Air China could serve numerous points in Europe via Turkish's network. In exchange, the thought goes, Air China would help Turkish gain more access in China – and in particular Beijing, Air China's hub and where Air China has significant influence.

Etihad's Abu Dhabi hub could facilitate traffic from China to Africa, a large but fragmented market where a hub would be ideal. Etihad partners with both China Eastern and Hainan. Hainan has already moved its Dubai service to Abu Dhabi and started some beyond codeshare services (including to Geneva, Johannesburg and Khartoum), but further integration awaits. China Eastern likes the concept of using Abu Dhabi, but China Eastern's focus largely remains on the domestic market and then its larger international markets.

Liberalisation and open skies seemingly a long way off

There are of course other methods to increase bilateral expansion.

Some speculated Turkey's Sep-2013 award of a missile defence system to China would be rewarded with traffic rights, but nothing has eventuated. It is not a bad thought since in absence of a liberalisation policy from China, foreign governments will need to be creative with how they demonstrate value their airlines – or country – bring, and how they are not detracting from traffic a Chinese carrier could bring.

Even an open skies arrangement between China and Korea, where traffic is more balanced, is some time away – perhaps, the more conservative reckon, not even this decade.

Genuine commercial opportunities and partnerships are being offered to China's airlines, and these could easily support bilateral growth as partnerships benefit both parties, avoiding the fear traffic gains are only in the interest of one side. The focus in China remains on its large domestic market. The challenge for foreign airlines is perhaps as much their proposition as fighting for attention to convey it.