The challenges facing the Bangladeshi aviation industry have been further highlighted in the past week with GMG Airlines suspending operations on 30-Mar-2012. GMG plans to restructure its operation to respond to a number of structural challenges in the industry, including rising competition from Middle East airlines. Meanwhile, the situation at national flag carrier Biman Bangladesh Airlines remains fragile, with the heavily indebted carrier facing a further wave of industrial unrest this month.

International airlines currently hold around two thirds of international capacity to/from Bangladesh. Just under 30 airlines are active in the market, although Biman Bangladesh Airlines remains the largest carrier operating to/from the country with a 28% international capacity share. Despite it being a price-sensitive market environment (which should support low cost carriers), development on this front has been limited and the market remains dominated by full service airlines. 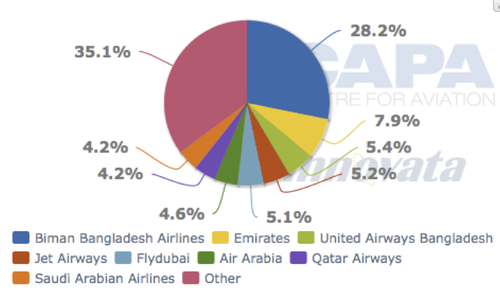 International traffic to/from Bangladesh has experienced steady growth in recent years, although the frequent cancellation of services, weak capitalisation of its airlines and infrastructure constraints have contributed to the poor performance of domestic airlines. Further slowing the expansion of foreign carriers in Bangladesh, the government suspended its short-term open skies trial in 2007 and now operates an essentially protective aviation policy.

This policy suspension put the airline industry under serious stress due to a shortage of capacity, partly as a result of the highly unreliable fleet of Biman Bangladesh Airlines (Biman’s fleet represents over 50% of the nation’s in service fleet total). The market, has however, benefited from the allocation of more slots for the local private airlines due to a change in the government policy, as it seeks to inject competition in the aviation industry.

Meanwhile, for those foreign carriers that can gain access, the Bangladesh market is relatively attractive, due to a continuing upward trend in economic growth, the lack of competitiveness of the home carriers and the country's large population. In addition the World Bank estimates there are 6 million Bangladeshi migrant workers abroad, according to the World Bank, constituting around 4% of the population and generating significant VFR traffic.

The majority of Bangladeshi migrants workers in the Middle East and North Africa and are mostly employed as labourers, particularly in the construction sector. The Middle East is unsurprisingly the nation’s largest international air market. In 2010, remittance inflows were equivalent to about 12% of its economy and are among the largest and most stable source of foreign exchange, which is making a noticeable developmental impact. There is also a sizeable Hajj pilgrimage market that airlines are able to capitalise on.

Meanwhile, growth in the domestic market has been strong, with local airlines handling 627,000 passengers on domestic routes in 2011, a 20% year-on-year increase, marking the highest level since 2008. Travel demand was boosted by an expansion of business and industrial activities amid a booming domestic tourism industry. The launch of new private airlines including Regent Airways (launched in 2010) also contributed to the growth. Regent Airways CEO Imran Asif commented: "It's good to see the growth. The current trend of growth is likely to sustain for the next three-four years as the prospect of massive improvement in roads and railways is not so bright". Regent Airlines transported more than one-third of total domestic traffic in 2011.

However, profitability in the domestic market often remains elusive.

The carrier, which delayed a planned IPO in Sep-2011 as a result of a stock market regulator suspension on book-building, expects to resume operations "later in 2012" with a new-look operation. The airline, which becomes the second major and recent withdrawal from the market following Best Air’s cessation in 2009, has scaled back its operations since Feb-2012, with the carrier operating a limited network prior to the suspension of service: Dhaka–Kolkata; Dhaka–Chittagong–Kolkata; Dhaka–Chittagong; Dhaka–Cox’s Bazar.

This however constituted 9% of domestic capacity in the market prior to its suspension. Comparatively, nine months ago the carrier operated a network of eight international (Kuala Lumpur, Bangkok, Kathmandu, Kolkata, Karachi, Dubai, Abu Dhabi, Jeddah and Riyadh) and five domestic (Dhaka, Chittagong, Cox’s Bazaar, Sylhet and Jessore) destinations, covered by 234 weekly services and with an 11% international capacity share of the Bangladeshi market. The carrier also had plans to expand with new services to the Middle East, Asia and Europe.

In its restructure, GMG Airlines, which commenced life in 1997 and started operations on 06-Apr-1998, will redesign its route network to focus on higher yield, higher growth domestic and regional routes using new narrowbody aircraft. CEO Sanjiv Kapoor noted its domestic and regional focus, covering south, southeast and near east Asia, is occurring amid a "rapid rise of Middle Eastern airlines in recent years with their access to advantaged sources of funding, advantaged location, large scale, and lower cost base, especially lower fuel costs and taxes".

Mr Kapoor added, "As we transit to the new strategy, our operations will be temporarily suspended with effect from March 30, as we await the delivery of new generation aircraft, clear legacy issues, execute the rightsizing and organise ourselves better to take up the future challenge". During this period of suspension, all ticketed passengers will be given a full refund and employees will be paid compensation benefits in accordance with the labour law. The airline is taking necessary steps to retain all of its AOC, route rights, frequencies and will be in full co-ordination with regulators, stakeholders and passengers.

The suspension of service and need for restructure is a massive setback for GMG which was launched to “take advantage of a specific gap that existed in the Bangladesh air transport industry for a quality oriented local airline but with a global reach”.

The situation at Biman Bangladesh Airlines, meanwhile, is not much better. While the airline achieved a financial recovery after it became a public limited company in Jul-2007 this has failed to be long-lasting. The carrier continues to be plagued by corruption allegations, a lack of planning, mismanagement, operational inefficiency and an ageing fleet (resulting in regular aircraft groundings and persistent operational delays).

The carrier, which appears to be under constant threat of bankruptcy, is facing a new wave of industrial disputes this month, as employees demonstrate for the immediate resignation of its chairman and board members. The employees have threatened to conduct a 48-hour strike from 16-Apr-2012. They also threatened to go on an indefinite strike if their demands were not met after the 48-hour walk-out.

In Jan-2012, Biman Bangladesh Airlines reportedly requested its staff take a 10% pay cut for the next six months to offset a "liquidity crisis". The carrier stated the request is a "voluntary proposal". Meanwhile, local reports indicate the carrier owes over BDT5 billion (USD61 million) to 36 local and international companies covering various purchases and maintenance costs.

The carrier had earlier revealed it was facing cash-flow problems after borrowing USD277 million from JP Morgan to finance two new aircraft. The carrier received the ExIm Bank guaranteed financing facility in Aug-2011 to support its long-term strategic expansion plan, to be repaid quarterly over 12 years. These are the first two aircraft arising from Biman’s 2008 order placed with Boeing for 10 aircraft (four 777-300ERs, four 787s and two 737-800s) scheduled for delivery over the 10 years to 2019 at a cost of USD1.3 billion.

Two new GE90-115BL-powered 777-300ER aircraft were delivered in Oct-2011 and Nov-2011, although the carrier is still seeking funding for the third and fourth aircraft. “Once the finance ministry gives the guarantee, we will invite requests for proposal and select the lowest bidder for the loan,” Biman Bangladesh MD and CEO Muhammad Zakiul Islam said. The carrier is deploying the 777s, which will gradually replace ageing DC-10s, on international services to London, Manchester, Rome, Milan and Kuala Lumpur.

Meanwhile, the carrier in Mar-2012, sought a further two month extension from Boeing for making a USD114 million pre-delivery payment for two new 777-300ERs against the manufacturer's mid-Apr-2012 deadline. “We have asked Boeing to extend the time up to June,” Mr Islam said. The pre-delivery payment was initially scheduled to be made in Oct/Nov-2011, two years prior to the delivery of the new aircraft. Boeing has previously stated that if the airline failed to pay the amount by 16-Apr-2012, it would not be able to deliver the aircraft by 2013 as per agreement.

The liquidity challenges facing the carrier are by no means new. Biman Bangladesh Airlines, according to reports in The Financial Express, was reportedly on the verge of bankruptcy in mid 2011 due to its large debt burden, after sliding from profitability to losses in 2010, with the carrier’s Chairman of the Board of Directors admitting the national carrier was going through a critical time. 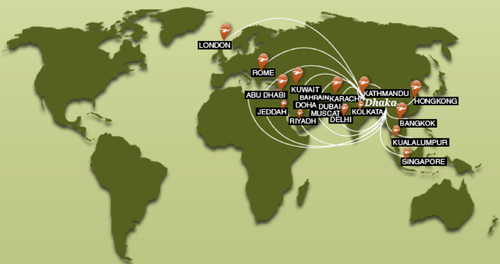 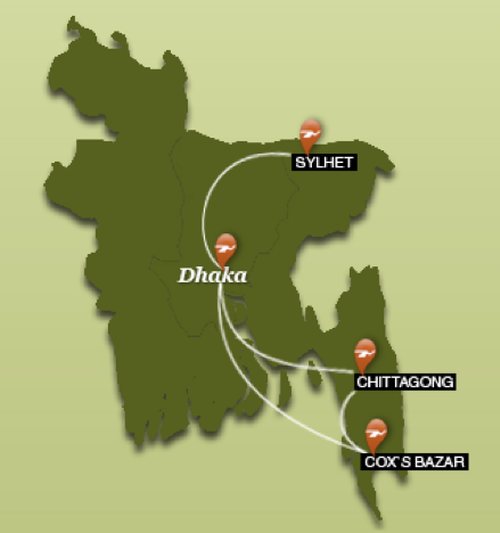 United Airways, a private airline formed in early 2005 and commencing domestic operations on 10-Jul-2007, is capitalising on weakness at its peers and continuing to expand its fleet and network to gain market share. To finance its expansion plan, the listed company last year conducted a rights issue offering 210 million ordinary shares in Sep/Oct-2011.

The carrier, which quickly gained domestic market share upon entry in Jul-2007, stated its aim is to take a “significant position in the international routes”. The carrier’s network currently comprises seven domestic destinations (Chittagong, Cox's Bazar, Dhaka, Jessore, Rajshahi, Saidpur and Sylhet) in addition to three destinations in the Asia Pacific (Kathmandu, Kolkata and Kuala Lumpur) and three in the Middle East (Dubai, Jeddah and Muscat).

Regent Airways, meanwhile, has completed its first year of operations after launching in Nov-2010. CEO Imran Asif stated the carrier has seen positive traffic trends in its operations. Regent Airlines transported more than one-third of domestic traffic in 2011, according to the airline, across its network of four destinations – Chittagong, Cox's Bazar, Dhaka and Jessore.

The Dhaka-based privately-owned airline was formed in 2010 by HG Aviation Limited, a fully-owned subsidiary of Chittagong-based conglomerate Habib Group. The carrier’s fleet is comprised of two Bombardier/de Havilland Dash 8-300s. The airline plans to induct larger jet aircraft such as the B757 as Regent seeks to expand beyond the borders of Bangladesh.

Regent Airways also plans to develop the country’s first full-fledged maintenance hangar belonging to a private airline, one which will span 500,000sqft of space within Dhaka Hazrat Shahjalal International Airport. 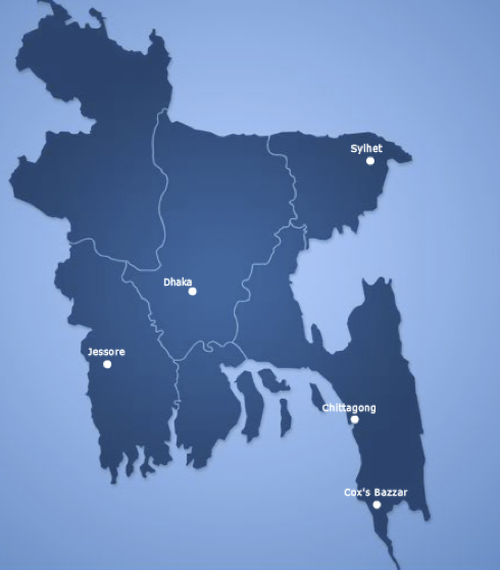 Royal Bengal Airlines a smaller player in the market

Founded in 2006, Royal Bengal Airways is a privately-owned airline headquartered in London. The carrier, which is wholly owned by R B Airline UK Ltd, operates domestic service within Bangladesh as well as international service to London.

Meanwhile, Malaysian-based Tu-E Capital Bhd in Feb-2012 confirmed it has signed an agreement for the purchase of 40% equity in Bismillah Airlines, with a capital injection of USD35 million. The company said the carrier is dedicated to providing services for Bangladeshi employees working oversees.

Tu-E Capital GM Azhar Idrus said the airline, established in 1998, had the "strength of injected capital through banking instruments, and was ready to hold equity in two other airlines, namely Thailand-based Platinum Airlines and Dubai-based Middle East Air". "We will act as a strategic alliance to these companies," he said, adding other Asian airlines had shown interest as well.

Bismallah Airlines, an enterprise within the Mollah Group of Industries, was the first private sector international airline holding AOC/ATO Licenses to operate regular freighter services as an international cargo carrier of Bangladesh. 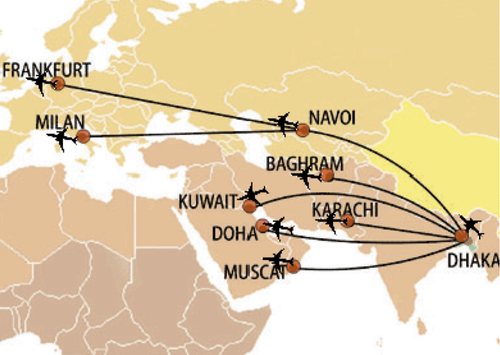 The recent cessation of activity of GMG Airlines highlights the challenges in the Bangladeshi aviation industry, a market with significant potential but a number of challenges on the road to profitable and reliable operations. The nation's airlines are however having success in developing the aviation industry in the country, with United Airways Bangladesh and Regent Airways among the private players supporting the growth trend.