The North Atlantic market will reopen following the US decision to lift the ban on travellers from a number of countries, including the EU and UK. The Biden administration will allow fully vaccinated travellers into the US from early Nov-2021. Quarantine will not be required, but passengers will need to provide proof of vaccination, a negative test and contact information.

The ban has weighed heavily on capacity and traffic. As a percentage of 2019 capacity, the North Atlantic has underperformed versus all Europe since Apr-2020. Moreover, it has been Europe's second weakest passenger traffic region (Europe-Asia has been weaker).

This matters to European airlines: the North Atlantic is their most important intercontinental market.

British Airways and Lufthansa led Europe's airlines by North Atlantic ASKs in 2019. However, smaller airlines – La Compagnie, Virgin Atlantic, Icelandair and Aer Lingus – had the highest percentage of their 2019 ASKs on North Atlantic. IAG had the biggest exposure among Europe's big airline groups.

There are wrinkles to be ironed out, such as exactly which vaccines the US will recognise, but the North Atlantic capacity recovery should surely soon catch up.

According to data from OAG/CAPA for the week commencing 20-Sep-2021, the North Atlantic market has reached a level of 44% of seat capacity operated in the equivalent week of 2019. 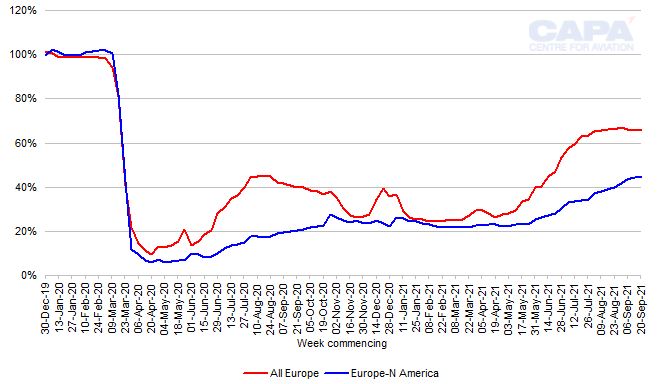 Passenger traffic has been weaker than capacity between Europe and North America.

Preliminary IATA data for Jul-2021 indicate that the RPK reduction versus 2019 had improved to approximately -70%, while ASKs were at -67%.

…and have been Europe's second weakest traffic region

Up to Jun-2021, North Atlantic RPKs had been consistently down by 80% to 90% throughout the coronavirus pandemic.

Among the major route regions from Europe, only Europe to Asia has had weaker traffic levels compared with 2019 (down by 90% or more since Apr-2020). 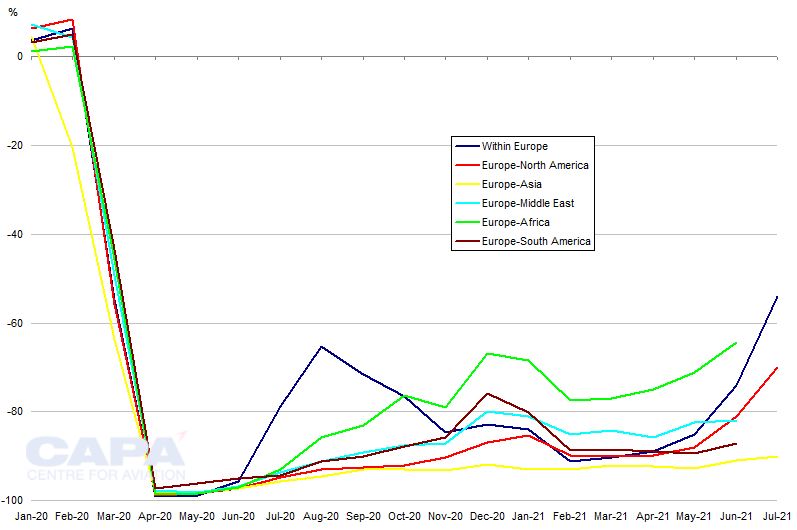 IATA data on regional passenger yields reported that the North Atlantic had the weakest results of all regions from Europe for almost all of the period form Mar-2020 to Dec-2020. North Atlantic yield was down by 15% to 27% throughout that time.

IATA has not reported yield data by region since then.

The weak performance of Europe-North America traffic and yield is significant to European airlines.

The North Atlantic represented 16.2% of 2019 ASKs for all airlines domiciled in Europe, making it more important to them than any other region outside Europe.

Of course, a number of leading European airlines focus only on short/medium haul and do not fly across the Atlantic, such as the low cost carriers Ryanair, easyJet and Wizz Air.

For those European airlines that actually operate in this market, the North Atlantic accounted for not far off a quarter (23.2%) of 2019 ASKs (analysis of the importance to individual airlines appears later in this report).

…and more important to European than to North American airlines

Moreover, European airlines have a greater proportion of ASKs on all long haul routes than either their North American or their Asia Pacific counterparts.

The North Atlantic is important to North American airlines too, but less so (at 12.5% of 2019 ASKs). For them, as for Asia Pacific airlines, intraregional routes make up the majority of ASKs.

European airlines had 43% of ASKs on long haul in 2019, compared with 24% for North American airlines and 20% for Asia Pacific operators (source: CAPA analysis of data from OAG Schedules Analyser).

In 2019, European airlines had 60% of North Atlantic ASKs

Nevertheless, the big three US legacy airlines held three of the top four places in the ranking of operators by North Atlantic ASKs in 2019 (United first, Delta second and American fourth), and Air Canada was sixth.

Among European airlines, British Airways (third overall) was the biggest by North Atlantic ASKs in 2019, followed by Lufthansa. Both had more than 60 billion ASKs in this market (similar in scale to United, Delta and American).

Others with a double digit billion ASK figure on Europe-North America in 2019 were Aer Lingus, SWISS, SAS, Iberia and Alitalia.

European airlines ranked by ASKs from Europe to North America (one way), 2019

The chart below ranks Europe's North Atlantic operators by the percentage of their total 2019 ASKs on Europe-North America.

The breakdown of capacity by ASKs gives a better indication of a region's revenue importance than comparing its share of an operator's seat capacity.

The chart highlights those most vulnerable to the loss of this route region and those with most to gain from the reopening of the market.

This ranking is headed by La Compagnie, with 100% of its ASKs on the North Atlantic in 2019.

Virgin Atlantic was second, with 70%, while Icelandair and Aer Lingus both had 55%. Norwegian Air, in fifth, had 44% of its ASKs on the North Atlantic in 2019 (and has since withdrawn entirely from this market).

SATA International-Azores Airlines had 43% of its ASKs on the North Atlantic. LOT Polish, British Airways, Lufthansa and SWISS also had 30% or more.

Ranking the leading European airline groups, IAG had the most North Atlantic ASKs in 2019, with 100 billion, closely followed by Lufthansa Group on 95 billion.

Air France-KLM's 63 billion ASKs in this route region were only two thirds of Lufthansa Group's.

As a share of group ASKs, IAG also had the highest exposure, with 32.0% of its ASKs on the North Atlantic, followed by Lufthansa Group, with 27.7%, while Air France-KLM had 21.5% of ASKs in this route region.

The US announcement that the North Atlantic will fully reopen to vaccinated passengers is very welcome news to European airlines operating in this market.

This restores reciprocity to most of the market after a long period when US-originating traffic has been allowed into much of Europe – but not vice versa.

Since 2019 Norwegian, Air Italy, Thomas Cook Airlines, XL Airways and WOW Air have left the North Atlantic market. However, there are new entrants to this market to take their place, among them JetBlue, Neos Norse Atlantic, and PLAY.

According to schedules currently filed with OAG and seat configuration data from the CAPA Fleet Database, the North Atlantic's capacity performance gap to the overall European market is set to narrow.

North Atlantic seat numbers are scheduled to grow from 44% of 2019 levels currently to 82% by the end of Feb-2022, compared with an increase from 66% to 89% for the total European market.

*Data for future weeks (after the week commencing 20-Sep-2021) are projections based on currently filed schedules and are subject to change.
Source: CAPA - Centre for Aviation, OAG Schedules Analyser.