European airlines finances were improving before the Ash Attack

Prior to the Ash Attack, European aviation was showing some signs of financial recovery, particularly in terms of unit revenues, thanks to continued capacity restraint and some glimmers of economic improvement. But the financial impact of lost revenue and costs incurred caring for displaced passengers, crew and aircraft from the airspace closures could run into the billions for European carriers. Several smaller airlines are reportedly already close to the brink. For the larger airlines, the Ash Attack has come at a delicate time in the cycle.

Prior to the Ash Attack, IATA forecast European airline losses of USD2.2 billion in 2010 (a slight improvement from the previously expected USD2.5 billion in losses). This represents 79% of the forecast global loss this year of USD2.8 billion and highlights the massive challenges facing European airlines, even before the recent (and potential future) airspace closures.

Network carriers are, however, attempting to react to this devastating scenario with new short-haul products, cost-reduction programmes and an increasing focus on consolidation/cooperation efforts. IATA earlier this month asserted that "mergers and consolidation is a must”, with carriers needing to “consolidate in order to build more efficiency”. IATA’s comments follow the confirmation of a merger between British Airways and Iberia, creating Europe's second-largest airline by market capitalisation and an estimated USD533 million in annual savings.

Air France stated its passenger and cargo business showed a “further marked recovery” in terms of both unit revenues and traffic in Mar-2010.

The carrier, however, stated that while unit revenues are “significantly above” 2009 levels, including in premium-class, they remain below levels reported in Mar-2008, although no exact figures were disclosed. The carrier added that the year-on-year RASK increases are “more pronounced” in economy-class than in premium-class, but added that since Jan-2010 “comparables are benefiting from a favourable base”.

In other financial-related news, Air France-KLM reportedly presented its budget to the company’s board, outlining that it expects to break even in the current fiscal year (12 months to Mar-2011), following a massive loss of EUR1.3-1.4 billion in the 12 months ended 31-Mar-2010. The budget reportedly estimates that while KLM will be profitable in the 12 months ending Mar-2011, Air France will report a loss of approximately USD100 million.

British Airways’ premium and non-premium traffic growth: May-2007 to Mar-2010 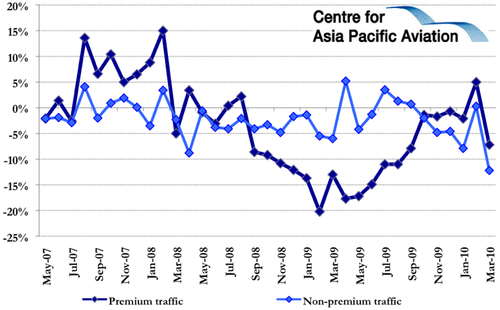 The star performer in the European market, in terms of yields, has been Air Berlin, which has continued to report impressive increases in RASK over the past two years (stemming from its effective capacity deployment plans and acquisitions that have reduced fare competition in some core markets). The German LCC reported a 1.4% increase in revenue per ASK (RASK) in Mar-2010, to EUR 5.58 cents, for the third consecutive month of year-on-year RASK improvements. 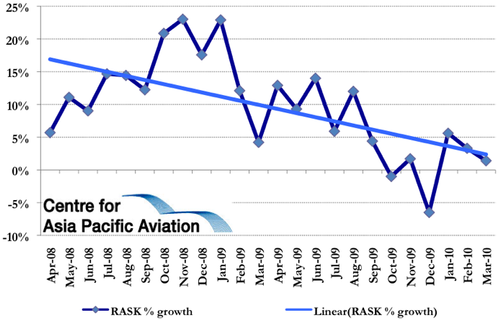 The carrier’s yields have also remained above levels of two years ago. 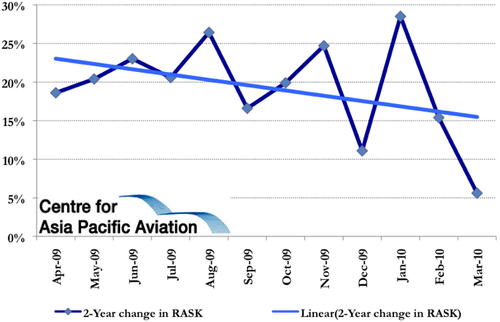 Norwegian yields fell by double digits, but on the improve

In the highly competitive Nordic market, Norwegian Air Shuttle reported an 11% year-on-year reduction in yield in Mar-2010 (compared with growth of 10% in Mar-2009) and an 8% reduction in revenue per ASK.

The yield profile reflects an adjusted route portfolio and the introduction of new aircraft with higher capacity and lower unit cost. Norwegian stated the yield reduction was also partially offset by load factor increases (+3 ppts to 78%) in the month. The year-on-year yield and load factor development was, however, positively affected by the Easter holiday. 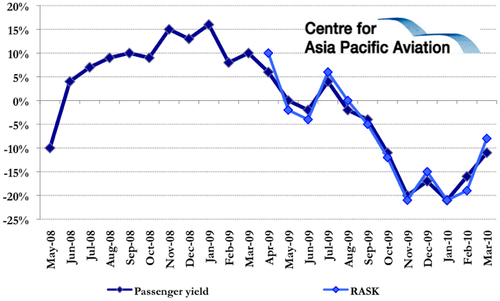 Finnair yields fell in 1Q2010 but there were some positive signs

Finnair commented that average yield per passenger kilometre for scheduled traffic in 1Q2010 declined 7%, with Finnair SVP Communications, Christer Haglund commenting, “the focus of business travel demand has shifted to outside of Finland. Long-haul traffic business-class sales in particular are clearly better than before”. He continued, “the price level of flight tickets is still low, however”.

Finnair CEO, Mika Vehvilaeinen, last month stated the carrier's goal for 2010 was to secure greater profitability from European “feeder traffic”. He added that the carrier is targeting a return to profit within a year following a EUR102 million loss in 2009.

SAS Group continues to suffer. Scandinavian Airlines reported a 10.5% yield reduction (based on currency adjusted figures) in Feb-2010, representing the fourth largest yield contraction for the carrier in the past two years. The reduction compares with growth of 2.6% in Feb-2009 (due to higher fuel surcharges imposed in early 2009). RASK was down 0.7% in Feb-2010, due to improved load factors (+8.6 ppts network wide to 73.1%)

Looking forward, Scandinavian Airlines stated yields are expected to remain “negative”, adding that the market continues to be “unpredictable” despite early signs of an industry recovery. CEO, Albert Henshcel, in early Apr-2010, commented that yield is improving “slowly”, with demand for premium seats, including business and economy extra also increasing “slowly”, although “significant” yield improvement is some time away.

SAS Group is implementing its Core SAS strategy, with the cost savings of the programme totalling SEK7.8 billion (EUR803 million), in addition to a 20% capacity reduction. The implementation of the cost savings initiative is “well on track”, with remaining result effects of SEK5.2 billion (EUR536 million). The Ash Attack will only exacerbate SAS' fragile position. 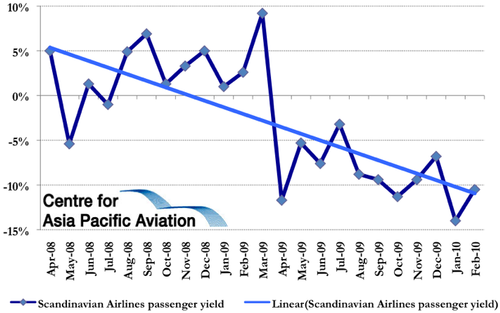 Cimber Sterling yields continue to fall off a cliff

The carrier stated the yield slump experienced in Feb-2010 was due to the carrier’s changed product mix (increased leisure production), the “extraordinarily keen competition” and falling demand. The change in product mix accounted for 61% of the yield decline, according to the carrier, which added that domestic yields dropped 31% in the month, which was partly offset by a 10 ppt load factor increase to 62%. The regional segment recorded a 20% drop in yield. Conversely, yield for the leisure segment increased by 22% despite what the carrier labelled as “very competitive market conditions”.

As a result of strike action by British Airways cabin crew, represented by Unite Union, UK/Europe passenger traffic slumped 18.6% in Mar-2010, to 1.3 million passengers, with capacity (ASKs) slipping 20.5%, although half of this decline was a result of planned winter capacity reductions.

The carrier stated the strike is estimated to have cost it an estimated GBP40-45 million. During the seven-day strike, the carrier operated 79% of long-haul services and 58% of its short-haul network. Over the first strike weekend the airline operated 78% of its long-haul programme and 50% of short-haul, and for the second strike weekend these figures rose to 83% and 67%, respectively. 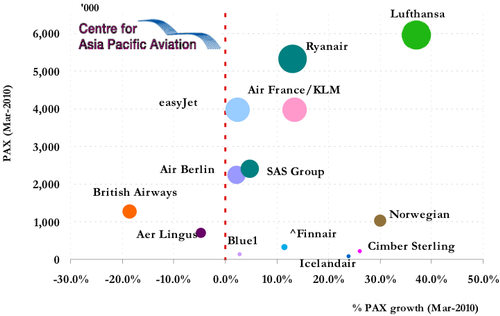 On the other end of the spectrum, Norwegian and Lufthansa Group both reported passenger growth of 30% or above.

However, Lufthansa’s rapid growth represents the inclusion of British Midland and Austrian Airlines into Group traffic, from Jul-2009 and Sep-2009, respectively, distorting actual growth rates. The Group's Mar-2010 passenger sales on a like-for-like basis (without Austrian and bmi) improved by a less-striking 9.3% year-on-year, to a 3.8% capacity (ASMs) increase, with a 4.0 ppt load factor gain to 79.4%.

Norwegian Air Shuttle reported a 30% jump in passenger numbers to 1.0 million in the month. The increase in passenger numbers, traffic (RPKs up 38%) and capacity (ASKs up 34%), was related to the group’s expansion in established markets and to the introduction of new routes from Apr-2009 to Mar-2010, as well as adjustments to production capacity.

Norwegian’s competitors in the Nordic market also increased passenger levels in the month, with Cimber Sterling, Icelandair (and Air Iceland), Finnair and SAS Group (which includes Scandinavian Airlines, Wideroe and Blue1) also reporting passenger growth. Cimber Sterling described the increased demand for services, noting that intense competition and the related fares has led to a “significant increase” in the number of leisure passengers on domestic routes.

In the month, easyJet was the second largest European LCC, reporting a 13.5% year-on-year increase in passenger numbers to 4.0 million, with an average load factor of 87.5% (+2.8 ppts).

easyJet’s load factor was 7.5 ppts above Ryanair’s. Ryanair reported a load factor of 79%, a 2 ppt year-on-year improvement -  and a notable 15.2 ppts above Air Berlin’s load factor in the month, which increased 1.7 ppts to 72.3%.

The three carriers handled more than 139 million passengers in 2009 between them, a 7.7% year-on-year increase and a massive 80% increase from 2005 levels.

This demonstrates their importance not only within the LCC sector, but within the wider European air transportation market. They will play a crucial role in repatriating stranded passengers as Europe starts flying again and could benefit from the financial turmoil their smaller rivals are encountering.