The COVID-19 crisis shows that while it is good to have a globally diverse network, a strong domestic operation is a major advantage for airlines when a shock disrupts international traffic flows.

Industry logic holds that a broad spread of international routes lessens an airline’s reliance on any single market – including its home patch. So if a downturn occurs in one country or region, airlines can divert resources to areas that are not affected. Many successful airlines have built their models around this concept.

And that approach makes sense – until something like a pandemic appears out of nowhere to trigger global border closures. Then domestic networks become a godsend, and the giant airline companies that depend on international connecting traffic look more exposed.

While international travel was the first to be hit, COVID-19 has caught up with many domestic networks as governments are increasingly shutting down internal movement. But domestic networks can be expected to return sooner, and demand should also rebound more quickly.

The Asia-Pacific region illustrates the benefits and limitations of different approaches. Although having domestic routes will not guarantee success, they should provide a valuable foundation for many airlines’ eventual recoveries.

Singapore Airlines and Cathay Pacific are examples of airlines that rely exclusively on international networks and lean heavily on connecting international markets via their hubs.

At first, these airlines were hurt due to their relatively high numbers of routes to mainland China, which was the first market affected. Then other international markets were progressively closed off due to tightening travel restrictions.

SIA has been forced to ground 138 of its 147 aircraft and suspend 96% of its capacity through at least the end of April. SIA notes that “without a domestic [operation] the group’s airlines become more vulnerable” when countries restrict or ban international travel. 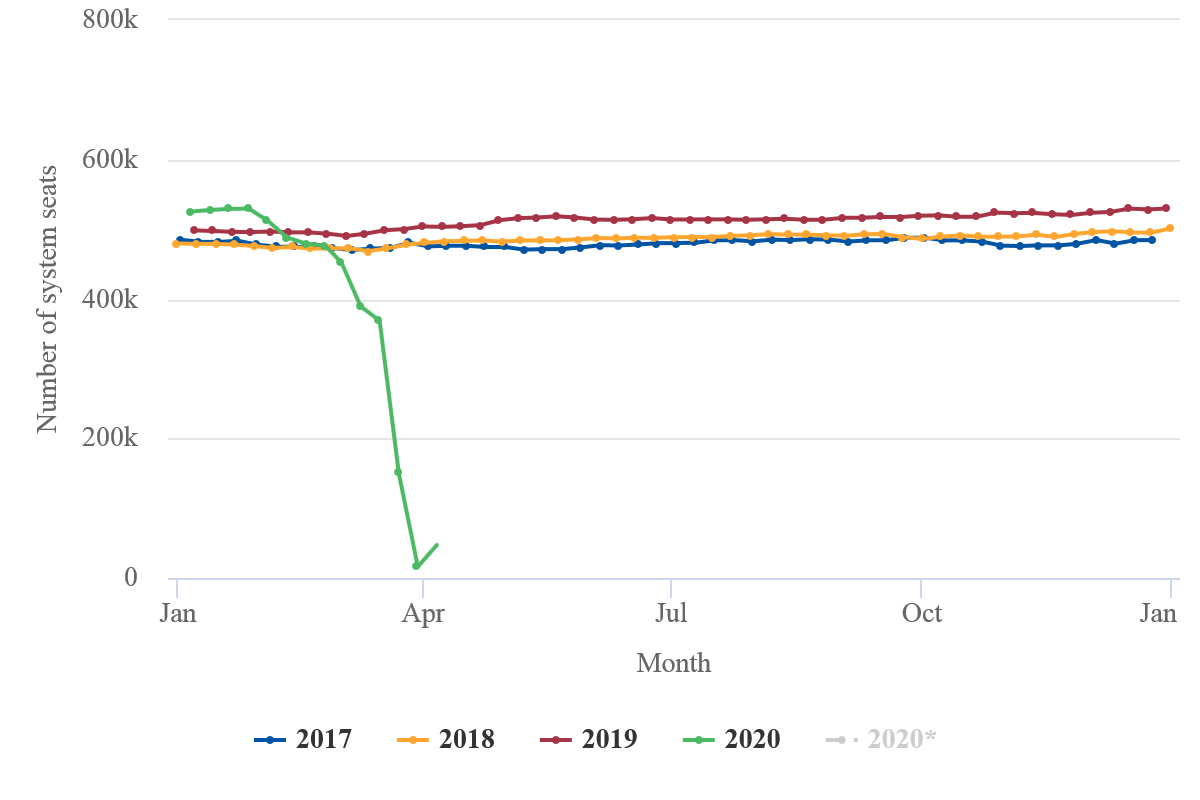 At least for SIA this disadvantage has been offset by a robust state response.

The airline will benefit from a significant aid package passed by the government, and its state-owned major shareholder Temasek has agreed to support the airline’s plan to raise SGD15 billion (USD10.4 billion) through new equity and bonds.

Cathay Pacific likewise plans to cut its passenger capacity by 96% in April and May. The airline will operate just a “bare skeleton” schedule, and even this could be under threat if more travel restrictions are imposed.

Although Cathay does not have a domestic network, it does have many routes between Hong Kong and mainland China on its Cathay Dragon subsidiary. However, this market was under pressure even before COVID-19 due to the Hong Kong protest movement that hurt demand in the second half of 2019.

Japan Airlines, All Nippon Airways and Korean Air are further examples of airlines that focus on international connecting traffic as key parts of their strategies. However, unlike Cathay and SIA, these airlines also have domestic networks. And their domestic operations have taken on greater importance since the COVID-19 outbreak began, as they have shrunk far less than international services.

This dynamic has caused the share of domestic operations to increase for all three of these airlines. In fact, the two Japanese airlines now have more domestic capacity – as measured in available seat kilometres – than international, reversing the trend from a year ago in 2019, according to data from CAPA and OAG (graph compiled by Aviation Week).

For JAL, domestic comprises 55% now, versus 34.4% a year ago. The domestic share will increase further due to a subsequent round of international cuts. 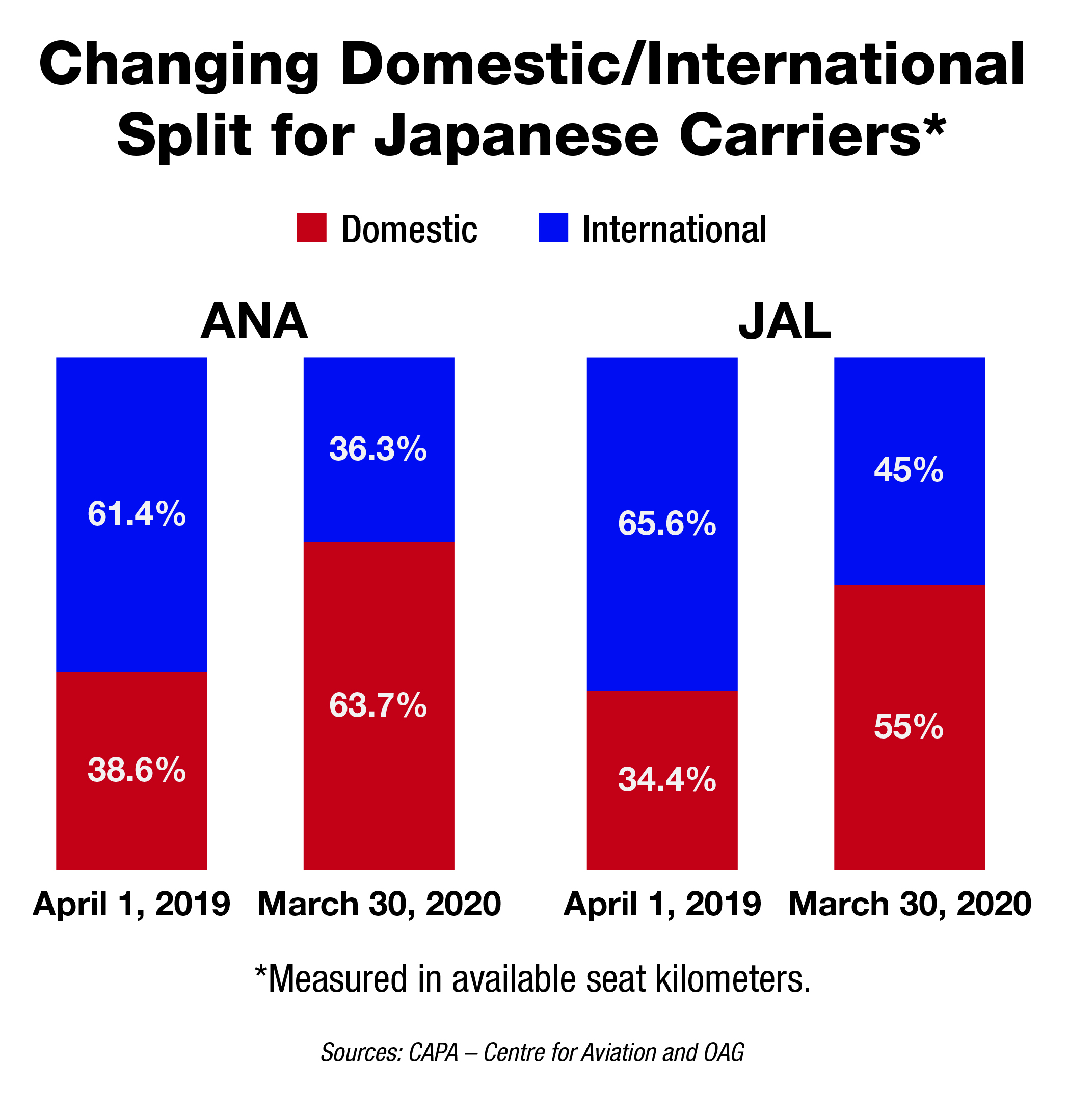 South Korea does not have as extensive a domestic network as Japan's, and routes are mostly shorter. But it does have the Seoul-Jeju route, which was the world’s busiest domestic market in 2019.

In terms of seats rather than ASKs, domestic capacity has increased from 25.5% to 60.6% of the total for Korean Air. 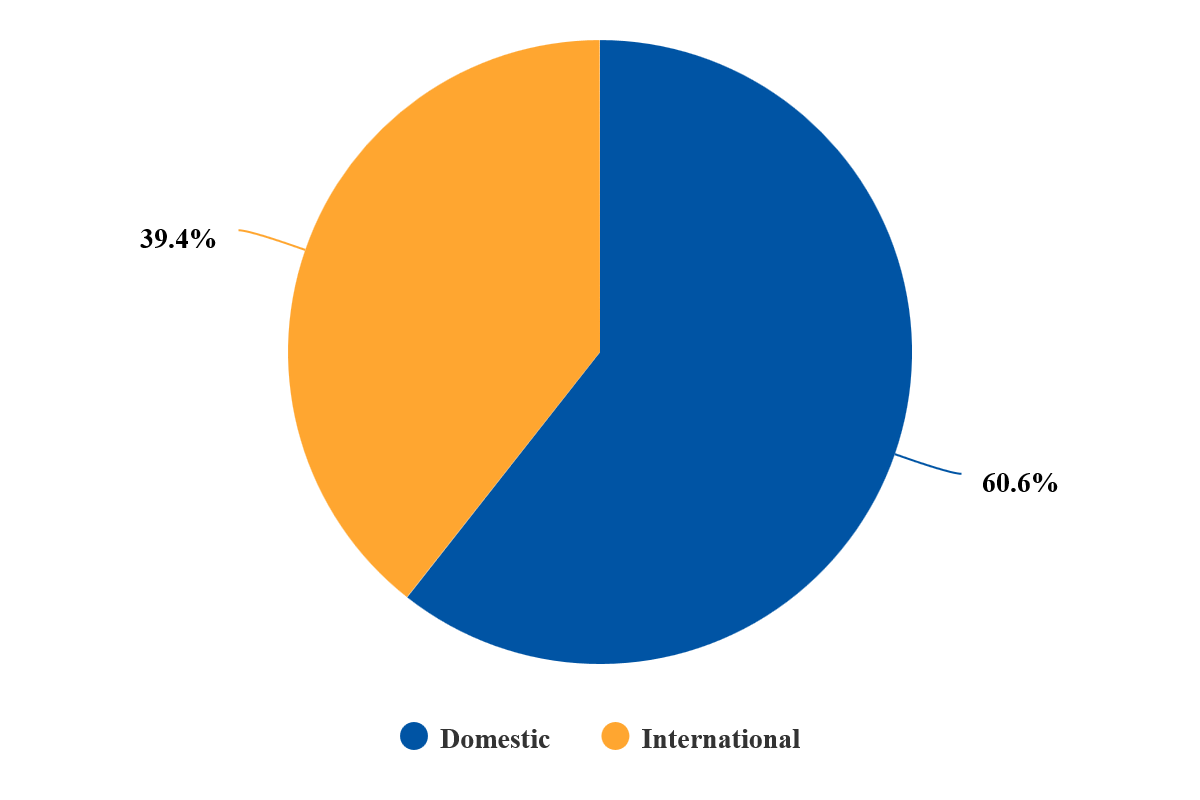 Garuda Indonesia typically has more domestic seats than international – by a factor of three in 2019.

The airline has noted that its broad domestic network, spread over many islands, gives it an advantage over other airlines that are more reliant on hubs.

As of 30-Mar-2020, Garuda operated to 45 domestic destinations versus 12 international, according to CAPA and OAG data. Other Asian countries with similar extensive overwater domestic routes include the Philippines and Malaysia.

Airlines based in Australia also had a distinct advantage when COVID-19 struck due to their broad domestic networks, which remained in operation after international services were shut down.

However, their domestic services have now also been dramatically cut back as the federal and state governments have tightened restrictions on local travel.

Qantas will cease all international services from the end of March through at least the end of May, and will reduce domestic capacity by 60%. Qantas CEO Alan Joyce predicts that the domestic market will recover far faster than international. Domestic restrictions are likely to be lifted earlier, and consumer confidence could also be more easily restored on flights within the country.

As recently as 13-Mar-2020 Virgin Australia said it was “insulated” to some extent from the international market decline, since it is a “predominantly domestic airline” with 78% of its revenue from that side of the business. Since then, however, it has been forced to suspend 90% of its domestic capacity.

Airlines in Vietnam have also had to shut down most of their domestic routes due to government restrictions.

Vietnam Airlines has cancelled all of its domestic flights except for one flight per day on its three core trunk routes. Vietnam’s Hanoi-Ho Chi Minh City route is usually one of the busiest domestic routes in the region, and likely will be again when the pandemic eases.

Air New Zealand has reduced its international capacity by 95%, and on 2-Apr-2020 the airline raised domestic cuts to the same level. Domestic demand and services are likely to increase once the country’s internal travel lockdown is lifted. But CEO Greg Foran notes that the airline is heavily reliant on international tourism, and because this traffic will not bounce back for some time, there will be “a flow-on effect on our domestic network.”

Thailand is another example of a country with a domestic network that depends on international tourism, and will suffer through a lack of inbound visitors.

China, Korea show signs of domestic recovery: will others follow?

China appears to be further ahead in the cycle than others when it comes to the decline and then recovery of domestic operations. While international service to China is still down significantly, Chinese domestic capacity has rebounded somewhat in recent weeks.

Domestic capacity in South Korea is also showing signs of rising again after a steep drop, and Korean Air says it will soon increase its domestic operations slightly. 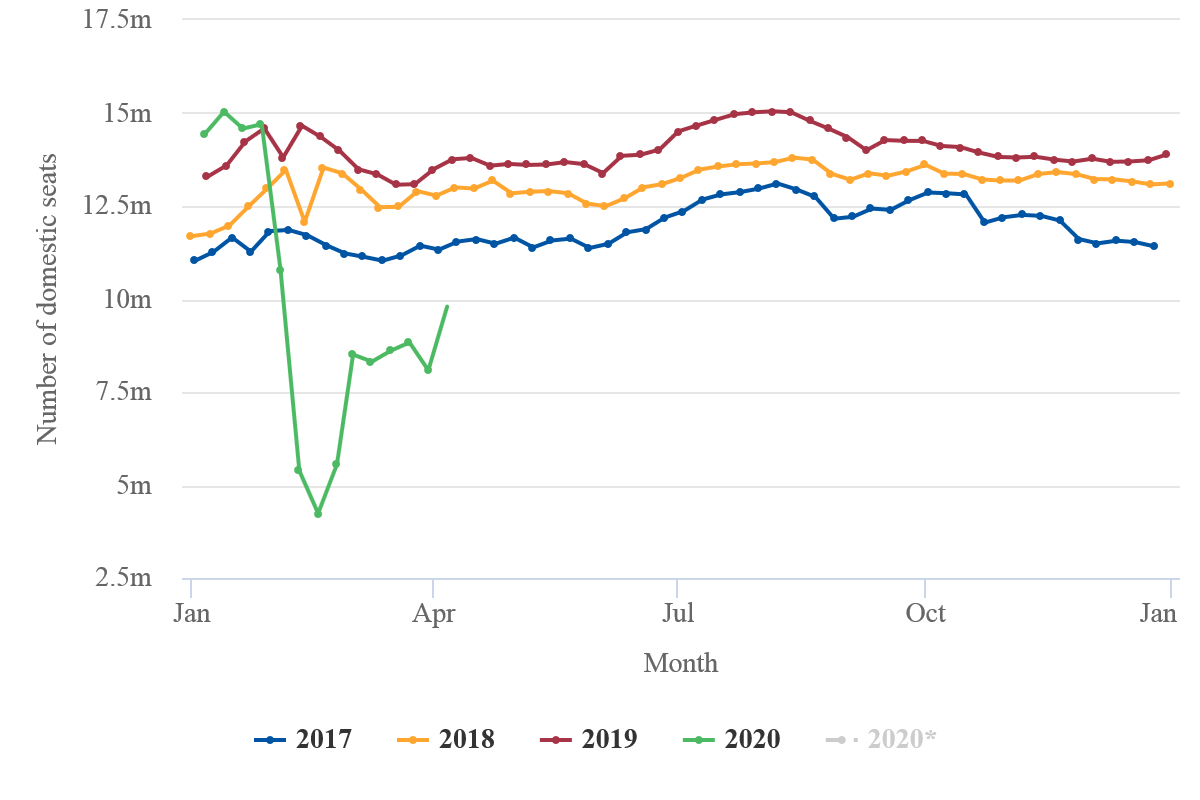 Domestic resumption is no guarantee of airline recovery, but will help many

Of course, flying more domestic seats does not mean they are full. Load factors are down significantly for most airlines, and will likely remain so for some time.

But the experience in China is a welcome sign that domestic capacity – and demand – should return faster than international traffic. This will give hope to the airlines that had strong domestic networks before the pandemic struck.

Meanwhile, the airlines relying on international connecting traffic will likely have to wait longer for their rebounds to begin when cross-border restrictions ease. Long haul routes, in particular, could take some time to be fully re-established.

Simply having a domestic network is not enough of an indicator by itself to guarantee a strong recovery. Some airlines with domestic operations are in a shaky financial condition and may still struggle to bounce back quickly.

Whereas SIA has a healthier balance sheet and robust government support, so could still emerge in decent shape, despite having no domestic traffic. But domestic networks should provide the first rung on the ladder to recovery for many Asian airlines.