A 16-day US Government shut-down and continuing pressure created by the devaluation of Japan’s currency did not hinder Delta’s 3Q2013 earnings growth as profits improved by USD444 million year-on-year to USD1.2 billion (excluding special items).

With corporate demand holding steady and holiday bookings looking relatively solid for Nov-2013 and Dec-2013, Delta CEO Richard Anderson is declaring the carrier will post an all-time record profit during 2013.

Delta throughout much of 2013 has been riding a wave of positive momentum despite some miscalculation in the spool-up of its Trainer refinery, and the continuing pressure from the devaluation of the Japanese yen. Even as it makes proclamations of record profits for 2013, Delta’s CEO Richard Anderson stresses that the carrier is keeping its head down as it works to continue the carrier’s advancement.

Top-line revenue growth of 6% to USD10.4 billion helped lift Delta’s profits for 3Q2013. Carrier president Ed Bastian declared the rise in revenue was remarkable given the decline in fuel prices. A drop in fuel prices usually results in lower revenue, reflecting the correlation between fuel costs and fares. Delta’s overall expenses increased 4% during 3Q2013 to USD9 billion while operating income jumped 19% to USD1.6 billion. The largest line-item expense was profit sharing, which grew 43% year-on-year to USD249 million as the company made higher pay-outs to employees for favourable operations and improved financial performance.

On a regional basis, Delta recorded year-on-year improvements in all its geographical entities with the exception of the Pacific, which was pressured by the devaluation of the yen even as Delta hedged against Japanese currency fluctuations. Yields in the Pacific fell 4%, which drove down unit revenues by roughly an equal amount.

Delta’s capacity in the region was essentially flat year-over-year in those markets as the carrier made adjustments throughout the summer season in the northern hemisphere in Japanese beach markets. The weakened point-of-sale in those markets resulted in a negative effect of USD80 million on Delta’s 3Q2013 revenues. 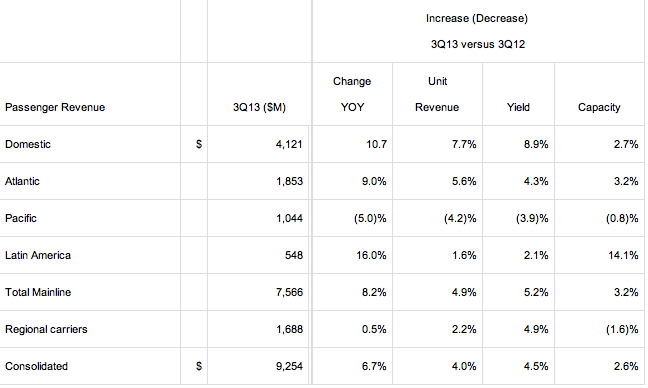 The carrier is planning a Pacific restructuring during 2014 to improve its fortunes in the Pacific. Delta is laying the groundwork for a Pacific rebound in Seattle as it plans to introduce new service from Seattle to Seoul and Hong Kong that are joining existing flights to Beijing, Osaka, Tokyo Narita and Haneda and Shanghai. For good measure, Delta executives remarked during a 3Q2013 earnings discussion that the Seattle-Shanghai flights that debuted in Jun-2013 were “out of the box profitable”.

Delta is also introducing new service from Seattle to London Heathrow in 2014, joining its existing European markets Paris and Amsterdam.

Mr Bastian explained that Delta’s Pacific restructuring entails using Seattle as a principal west coast hub (evidenced by the shifting of Detroit-Hong Kong to Seattle). As Delta works to add service to Hong Kong and South Korea it will reduce its concentration in Japan.

Delta’s domestic entity was the top performer during 3Q2013 as yields jumped 9% driven in part by a strong performance in Delta’s corporate business especially at its Atlanta hub, while unit revenue growth in its New York operations has outpaced system growth for several quarters. Overall corporate revenues increased 10% driven by strides Delta made in the banking, financial and healthcare sectors, which each posted gains in excess of 15%, the carrier states.

A 20% rise in unit revenue on Delta’s services to London Heathrow helped lift the carrier’s 3Q2013 trans-Atlantic yields by 4% on a 3% rise in capacity. Delta also enjoyed a USD40 million benefit from its 49% ownership stake in Virgin Atlantic during 3Q2013 as Mr Bastian remarked that despite some sluggishness in European economies, the joint venture among Delta and its SkyTeam partners Air France/KLM and Alitalia helped drive the 6% rise in unit revenue growth Delta recorded in the trans-Atlantic market in 3Q2013.

Delta’s yields in Latin American markets improved sequentially from 2Q2013 to 3Q2013 growing from a decrease of 2.3% in the second quarter to a rise of 2% in the third quarter. The carrier’s partnership with Brazil’s second largest carrier Gol generated USD20 million in incremental revenue during 3Q2013, which helped Delta’s yield performance in Latin America. Delta also recorded unit revenue improvement in Mexico driven by its partnership and partial ownership stake in Aeromexico.

Delta’s Trainer refinery outside Philadelphia, Pennsylvania turned a USD3 million profit during 3Q2013 after recording roughly USD136 million in losses since 4Q2012. Mr Anderson remarked that Delta intends to improve Trainer’s profitability through the sourcing of lower cost domestic crude from the Bakken formation in North Dakota. The first shipment of Bakken crude was delivered to Trainer during 1Q2013, and previously Delta has stated its intent to refine 75,000 to 100,000 barrels of Bakken at Trainer per day, which would represent a fair amount of Trainer’s 185,000 barrel per day capacity. Absent from Delta’s commentary was any remarks over the previous projections of USD300 million in annual savings Trainer could produce.

Heading into the fourth quarter, Delta estimates Oct-2013 unit revenue growth year-on-year of 4%. Mr Bastian cautioned the comparisons for the month are somewhat difficult as Hurricane Sandy that struck the US east coast a year prior created 1ppt of higher unit revenues in Oct-2012.
The shut-down of the US Government also affected Delta’s Oct-2013 revenues by roughly USD25 million. Comparisons in Nov-2013 are also somewhat difficult as the busy travel days at the end of the US Thanksgiving holiday will carry over into Dec-2013, and a USD30 million negative revenue hit from Sandy during Nov-2012.

Overall, Mr Bastian concluded that based on current bookings Delta forecasts a strong holiday period and a “solid close for the year”.
The carrier’s current 4Q2013 forecast is a 7% to 9% rise in its operating margin, which Mr Bastian stated represents a margin expansion of 200 to 300 basis points versus 4Q2012.

Delta’s projected 1% to 2% rise in system capacity for 4Q2013 is being driven by placing 27 new aircraft into service during the quarter and retiring 41 aircraft. Included in the newer aircraft are higher-capacity regional jets as Delta works to slash its 50-seat jet fleet from 260 at year-end 2013 to 100 to 125 during the next two years.

Mr Anderson remarked that the new aircraft – which also include Boeing 737 narrowbodies – produce maintenance and fuel efficiencies while keeping Delta’s capacity growth below projected US GDP increases. But in the short term the deliveries are contributing to Delta’s projected 2% rise in unit costs during 4Q2013 as Mr Bastian noted that there is a bit of uncertainty on timing and induction of the aircraft, which is driving the unit cost increase. 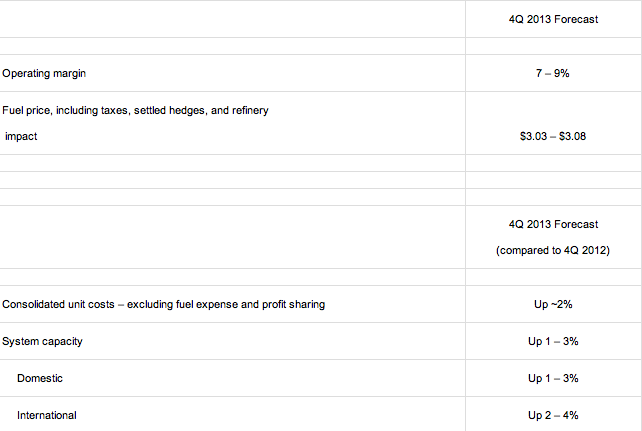 Delta’s latest 3Q2013 results reflect efforts undertaken by the carrier during the last few years to optimise its network through the slot swap at New York LaGuardia and taking stakes in Latin American carriers to magnify its reach in a strategic global region. As it works toward a 1-Jan-2014 debut of its joint venture with Virgin Atlantic, its fortunes across the trans-Atlantic should also improve.

Delta holds an interesting position in the US airline industry as it continues to build on network strength while United’s performance remains relatively weak and American and US Airways await their day in court to defend their proposed merger.

Delta’s business is not risk free as the risk-reward scenario in its Trainer exercise has yet to be proven out. Its 2% rise in unit costs for 4Q2013 is in line with previous projections of 1% to 2% for 2H2013, and the carrier is determined to keep its cost increases below inflation. But declining costs are likely more favourable than increases under the inflation threshold.

As it enjoys advantages over its US legacy peers, Delta may need to turn its attention outside the US as its next chapter unfolds. Its next set of competitors is likely rising from outside the traditional and mature markets. For Delta to remain strong in the long term, keeping one eye outside the ever-maturing (and slow growth) US market will be essential.

On the massive potential north Pacific routes, Delta is at a disadvantage to its main US peers in not having a metal neutral partnership to support these long haul operations. Such JVs are linked indelibly to open skies regimes - somewhere China is not yet ready to go. Delta's SkyTeam partners, China Eastern and China Southern on the mainland cannot deliver the rewards that are starting to flow to the oneworld and Star JVs based around JAL and ANA in open skies Japan. Delta has Korean Air, where open skies also exist with the US, but clearly considers this an inadequate alternative to a solid foothold in Japan.