Delta Air Lines’ scheme to return USD1 billion to shareholders during the next three years is the latest example of how the carrier is widening the competitive distance as its merger with Northwest Airlines is essentially done and dusted. The airline unveiled its plans for shareholder returns after months of prodding by investors that have watched Delta pare down its debt, keep capital spending costs in line and generate solid free cash flow.

At the same time the carrier has set new debt reduction targets, it hopes all its efforts to get its financial house in order will lay the groundwork to achieve investment grade status, something Delta admits it will not attain anytime in the near future.

Through its latest moves Delta is also attempting to prove that the newfound stability in the US airline business has staying power after a decade of bankruptcies and economic turmoil have forced airlines to undergo a major reset.

Paring down debt while lifting returns – a solid case for investors

In the roughly six years after Delta (the predecessor to the now merged Delta-Northwest) exited Chapter 11 bankruptcy protection, the carrier has embarked on a trajectory to reach a point where it can seriously devise a strategy to reach the holy grail of becoming investment grade – a title presently only held by a single US carrier – Southwest Airlines.

Since 2009 Delta has increased its operating cash flow by USD1.4 billion, seen its return on invested capital (ROIC) jump 9.8ppt and pushed down its adjusted net debt by USD5.3 billion. At the end of 1Q2013 Delta’s debt levels stood at USD11 billion, and the carrier assures that it will reach its USD10 billion target by YE2013. With that goal within reach, Delta has already set a new debt target of USD7 billion.

The carrier arrived at the new net debt target after undertaking a study to determine where the business “could be with investment grade-like credit metrics”, explained Delta president Ed Bastian during a recent presentation to investors. He admitted Delta’s debt levels would need to be substantially lower before having an investment grade rating bestowed on the carrier, but with its new debt level target, Delta would attain “BBB characteristics”, said Mr Bastian. 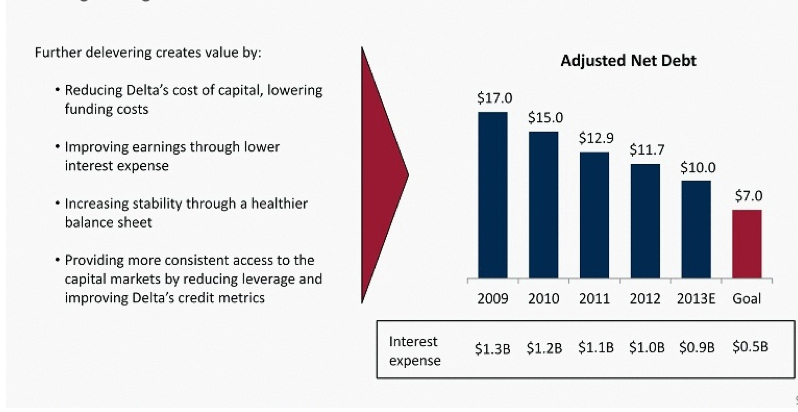 During its build-up to shareholder return and laying the groundwork to eventually become investment grade Delta has also attempted to tame its capital spending while making necessary product investments – full flat seats, inflight connectivity and airport facility upgrades – to ensure it remains on par with its US legacy and global airline competitors.

While making those investments Delta devised a strategy to ensure its capital spending did not exceed earnings or free cash flow as a means to help clean-up its balance sheet and reach its targeted debt levels. It has focused investment less on acquiring large numbers of new aircraft and instead acquiring used aircraft like the Boeing 717s of its rival AirTran. Presently it is a bet Delta is winning as the company is enjoying both lower ownership costs and falling fuel prices.

Delta now has a target of keeping its annual Capex between USD2 billion and USD2.5 billion between 2013 and 2017. 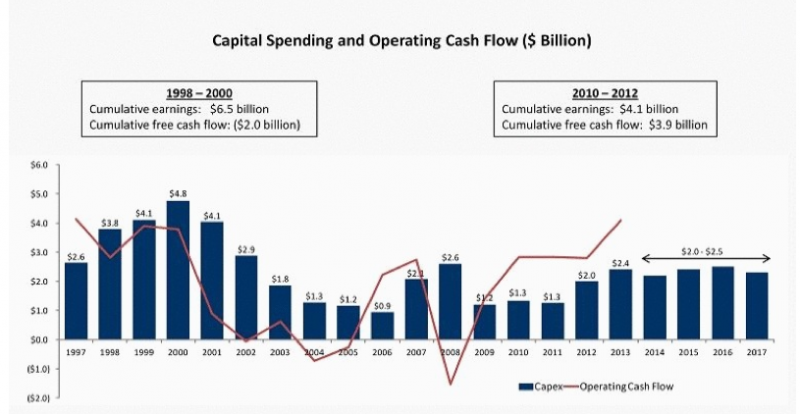 All of these steps have led Delta to create a reward for patient shareholders in the form of USD0.06 dividend and a USD500 million stock repurchase programme that combined will return more than USD1 billion to shareholders during the next three years.

Previously, Delta targeted revealing its return to shareholders at its annual meeting in Jun-2013, but opted to disclose the plans roughly a month earlier in May-2013.

See related report: Delta presses forward to build a competitive network in a consolidated and mature US market

It is somewhat of a milestone for Delta, its shareholders and the US airline industry at large since Southwest is the only other major carrier to issue a dividend and Alaska Air Group has participated in stock repurchase schemes. But Southwest was not about to lose its investment-grade lustre or possibly have its shareholders take a look at Delta now that the carrier is awarding dividends. Shortly after Delta revealed its shareholder rewards, Southwest more than doubled its dividend from USD0.01 to USD0.04.

Delta’s crystallising of its plan to reward shareholders and Southwest’s moves to ensure its shareholders remain satisfied are welcome positive moves that could attract some investors that have shunned the airline business during the last couple of decades as mismanagement and external crises ranging from SARS to volcanic ash have perpetually made the industry unattractive.

Airlines only have so much control in thwarting the volatility created by tsunamis, H1N1 and skyrocketing fuel prices, which is likely a driver behind Delta’s plans to continue de-leveraging its balance sheet. Mr Bastian remarked that while Delta “feels great optimism” about the future, “we want to secure that future” through its continued focus on de-risking its financial leverage.

Delta has made great strides since 2009 in working to reach a point where it can deliver shareholder returns – its efforts are all the more impressive given it put those pieces in place during fuel prices reaching record highs and a macroeconomic downturn that it still creating some uncertainty around demand.

But Delta also still has some risk factors that could be spooking some would-be investors. Its pension plans are permanently frozen, and the carrier did enjoy relief from federal government that allows a longer funding period for commitments prior to freezing of the plan and favourable discounting rates. Yet its pension commitments remain hefty, prompting many investors to question how Delta will fund its requirements.

Presently, depending on the discount rate, Delta’s pension funding commitments could range from USD8 billion to USD13 billion. The carrier has stated it plans to make up to USD1 billion of incremental contributions to the plan during the next five years in addition to the USD650 million to USD700 million in minimum annual required contributions. Mr Bastian admitted that Delta realises the pension risk is a “bit of an overhang” but the carrier believes the minimum pension requirements over the next decade combined with 9% return on assets should create sufficient cash flows for its pension funding. 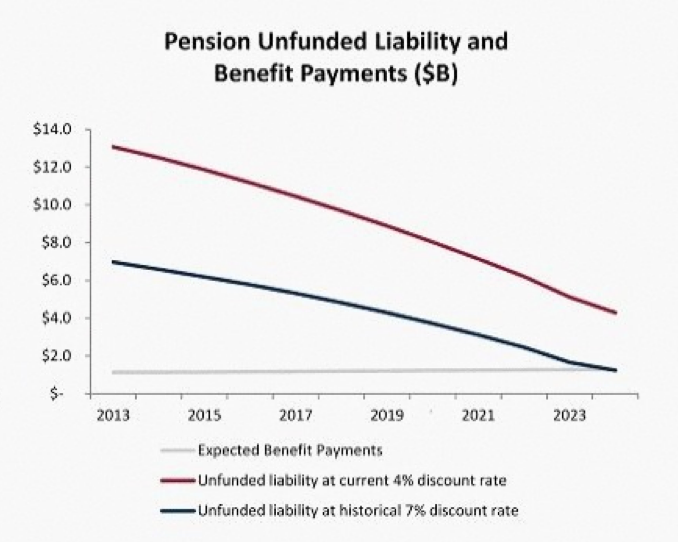 Some of its investments in product and technology alongside salary and wage increases resulting from contracts negotiated last year have recently created some cost headwinds for Delta. The airline's year-on-year ex-fuel unit cost increases were about 5% for FY2012 and 1Q2013. But the unit cost pressure should decrease during 2H2013 as Delta laps the salary increases instituted with the conclusion of new labour deals in 2012.

Mr Bastian remarked that only Southwest has higher wage rates than Delta, noting that Delta employees have recouped most of the concessions they agreed to during the respective turns in Chapter 11 by Delta and Northwest. He stated that the wages are in balance with the revenue Delta is generating, and remarked that with the new agreements Delta will have stable labour costs during the next few years.

Delta expects its unit costs excluding fuel to grow 1% to 2% during 2H2013, and thereafter the carrier is targeting unit costs growth within the range of inflation of flat to a 2% increase.

Delta's unit costs guidance: 2013 and beyond 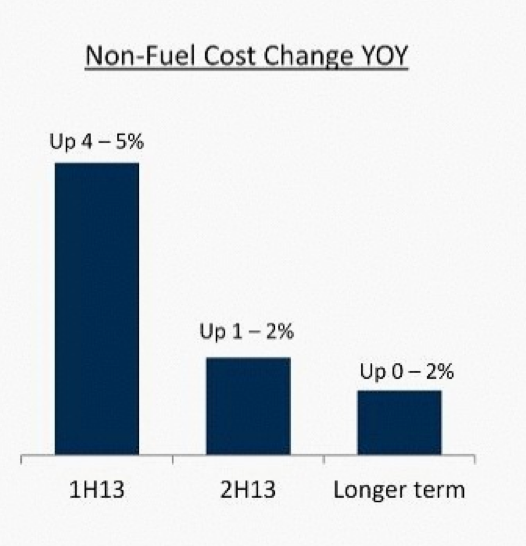 Delta’s strides in finally delivering shareholder returns are commendable, and the carrier deserves some recognition for the de-leveraging efforts it undertook in a shaky business environment. But some would-be investors are for the moment likely holding back to determine the hard-won returns by investors are just a one-time occurrence or if Delta is indeed leading the charge of a new business paradigm in the airline industry.

The momentum Delta is currently enjoying can only be sustained if it is indeed able to keep costs under control.