Delta’s exuberant purchase of an oil refinery near Philadelphia, Pennsylvania has been tempered during the last year as the losses at Trainer for 4Q2012 and 1Q2013 were close to USD85 million.

As 2Q2013 earnings reporting season nears, the carrier’s investors will be carefully scrutinising Delta’s results to determine if management declarations of a break-even performance of the refinery come to fruition.

Delta’s rationale for purchasing Trainer in 2012 seemed cute. Through a smallish USD150 million or so investment (which has now risen to USD250 million), Delta was to gain some control in unruly crack spreads (refining costs) that accounted for USD2.2 billion of its total 2011 fuel bill of USD12 billion. In Apr-2012 Delta estimated that its crack spread cost per available seat mile jumped from USD0.41 to USD1.22 from 2009 to 2011. Part of the bet was on Bakken Shale crude being cheaper than Brent. 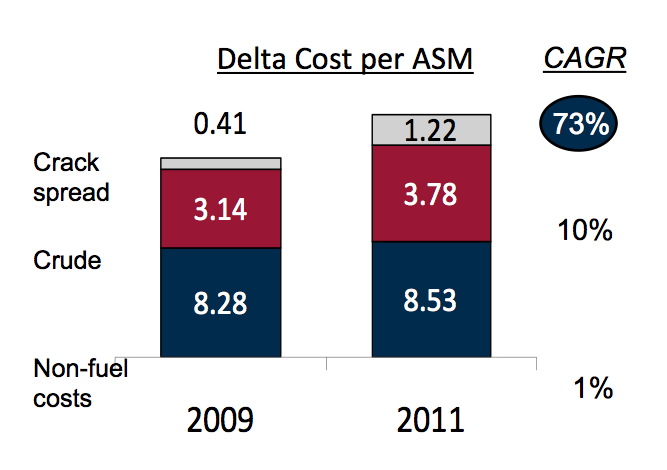 See related article: Delta’s unconventional fuel hedging strategy to be put to the test as its refinery opens

But as Trainer opened its doors under new ownership by Delta, super storm “Sandy” struck the US east coast, grinding air travel to a halt and significantly disrupting production at Trainer. Sandy damaged regional pipelines and terminals, which reduced distribution points for products and slowed production at the facility.

After the 4Q2012 loss Delta executives highlighted their expectations that Trainer would produce a modest profit during 1Q2013, but those hopes were dashed as the refinery produced a smaller USD22 million loss.

Outlining the loss for 1Q2013 during Mar-2013, Delta president Ed Bastian explained that ongoing operational delays resulted in Trainer running at roughly 75% capacity during most of 1Q, but at that time he still believed the refinery would break even during the quarter.

Referencing “teething pains” Delta experienced in Trainer’s spool-up Mr Bastian concluded in Mar-2013: “Running an oil refinery, much like running an airline, is not for the faint of heart.”

Obviously unplanned disruptions (just like oil prices) are beyond the company’s control and the storm occurred at a unfortunate time just as Delta was taking the reins at Trainer, re-starting production and under heavy scrutiny for its non-traditional approach to taming fuel volatile fuel costs.

One of Delta’s strategies in managing Trainer was to source crude from the Bakken Shale Formation in North Dakota, which is generally cheaper than sourcing Brent crude from the North Sea.

Based on the latest data from the US Energy Information Administration, Bakken overall was considerably cheaper than Brent from Jun-2012 to Jun-2013.

But as the latest EIA report notes, Bakken strengthened against Brent in Jun-2013 as issues with Canadian crude oil production may have diverted crude from its major trading hub in Cushing, Oklahoma, which increased demand for Bakken and pushed prices higher.

Bakken crude versus Brent based on the WTI benchmark: Jun-2012 to Jun-2013

Delta received its first shipment of Bakken crude by rail at Trainer during 1Q2013, and at that time Mr Bastian expressed his hope that as the levels of deliveries to the refinery increase, considerable savings should be generated. But proclamations of USD300 million in annual savings have gone quiet as the spool-up of the refinery is taking longer than expected, which will likely push back the initial savings estimated by Delta.

It is hard to predict if the decreasing cost differential between Bakken and Brent that occurred in mid-2013 will have any adverse effect on Trainer during 2Q2013, given the small amount of Bakken the refinery is sourcing and the overall challenges and delays in advancing Trainer to full-scale production.

But despite the challenges Delta has faced in Trainer’s operations, Mr Bastian still believes that tapping cheaper sources of crude such as Bakken remains one of the real game changers for Delta with respect to the Trainer acquisition.

At the end of 1Q2013 Delta CFO Paul Jacobson stated the carrier has entered into agreements to begin receiving regular shipments of Bakken shale products at Trainer during 2H2013, which would lower the refinery’s crude input costs.

Pressed over the quantity of Bakken that Delta would expect to refine at Trainer, Mr Jacobson estimated that over the long-term “we’re looking to settle out somewhere in the 75,000 to 100,000 barrels a day..”. Using Trainer’s estimated current output of 185,000 barrels per day, Bakken could eventually comprise more than half of Trainer’s production (using the top-end 100,000 per day estimate).

Delta silent about whethere extra investment in Trainer will be necessary

Current transport of Bakken to the US east coast is carried out through a combination of rail and barges. With the surging demand by all refineries in the region for the cheaper Bakken from North Dakota, some investment will be needed to support the transport of Bakken. Queried about additional investment to make Trainer “Bakken ready”, Mr Jacobson remarked that Delta has not made any decisions regarding long-term investments with respect to infrastructure to support Bakken transport.

He did note, however, that there are multiple offloading and terminal facilities on the east coast, noting Bakken can be barged from various locations.

With US airline earnings season starting shortly, Delta in a recent investor update estimated its average fuel price per gallon including taxes, its settled hedges and impacts from the refinery, to average between USD3.00 and USD3.05 during 20Q10213. For 2Q2012 Delta on a GAAP basis recorded a USD3.95 per gallon fuel prices that included mark-to-market adjustments on out of period fuel hedges.

Some of the decrease in Delta’s fuel costs year-on-year for 2Q2013 are simply reflective of lower fuel expense in general as US airline trade group Airlines For America (A4A) estimated that US carrier fuel costs as of 17-Jul-2013 year-to-date were USD2.92 compared with a 2012 average cost of USD3.06 per gallon. 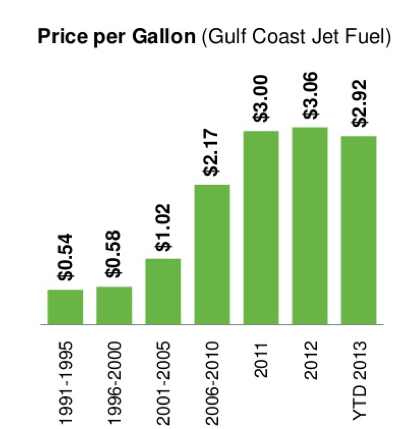 Obviously it is too early to predict success or failure in terms of Delta’s attempt to attain more control over unruly fuel costs.

But if Trainer fails to meet break-even targets in the current quarter, the sceptics that declared the airline underestimated the costs and effort in stepping outside its scope of business to run an oil refinery are in the ascendancy. They might soon be able to cash in on their predictions unless Delta offers a more detailed, long-term vision of how it intends to leverage Trainer’s capabilities to lower its fuel costs.

The concept of owning a refinery is not helped by, perhaps apocryphal, stories like an airline CEO recently being approached by an oil company offering to sell one for a dollar; when he declined, the offer became "well, how about two refineries?"

Innovation is a great thing, but it does not come with guarantees. Delta may yet be vindicated; for now though the timing is looking wobbly.