Curacao-based InselAir is planning to launch a sister carrier in Aruba in 1Q2012, the first step towards potentially establishing a pan-Caribbean airline group. InselAir is also planning to add two MD83s in 1Q2012, including an aircraft modified to operate flights of up to six hours, which will be used to launch service to Sao Paulo.

InselAir CEO Albert Kluyver says InselAir Aruba will launch services in Jan-2012 with an initial fleet of one MD83 and two Fokker 50 turboprops. The group has identified 10 routes for the new carrier but Mr Kluyver says InselAir Aruba will initially serve only four destinations: Curacao, the Dominican Republic, Cuba and Venezuela. He says six routes are expected to be operated within the first year, including Brazil and Ecuador.

Future planned destinations for InselAir Aruba include Colombia, Costa Rica and Puerto Rico. “We will focus our growth in Aruba,” Mr Kluyver says. 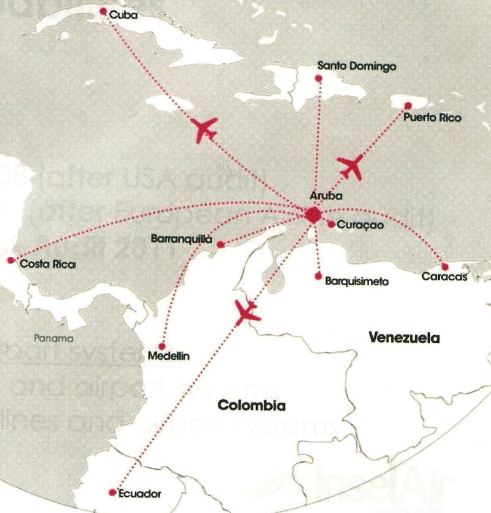 Insel is planning significant capacity expansion for 2012 as the group’s jet fleet expands from seven to five aircraft. Most of the additional capacity will be operated by the new carrier in Aruba.

Insel’s group of five local owners decided to launch an airline in Aruba partially because a large portion of its passengers were already connecting via Curacao to Aruba. InselAir now operates seven daily flights to Aruba from Curacao. Mr Kluyver says some of these flights will be taken over by InselAir Aruba after the new carrier launches, but the total frequency on the shuttle route connecting the two Dutch Caribbean islands will increase.

Curacao-Aruba is by far Insel’s largest route, accounting for over 5000 seats per week. While both islands are part of the Dutch Antilles chain, Curacao-Aruba is considered an international route (Curacao-Bonaire and Curacao-Saint Maarten are Insel’s only two domestic routes). Curacao and Aruba have separate governments and as a result Insel is now in the process of securing a second operating certificate from Aruban authorities. 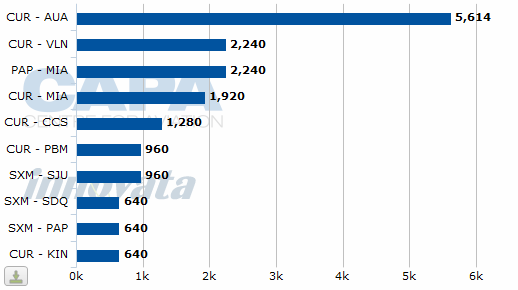 While Insel does not plan to launch new routes from Curacao next year as new destinations such as Sao Paulo will only be served from Aruba, the Curacao-based carrier will continue to operate its current network of 12 routes from its main hub. Mr Kluyver says Curacao will continue to be the group’s main hub for transit passengers. He expects Aruba will be more of a point-to-point market as Aruba is a bigger destination. 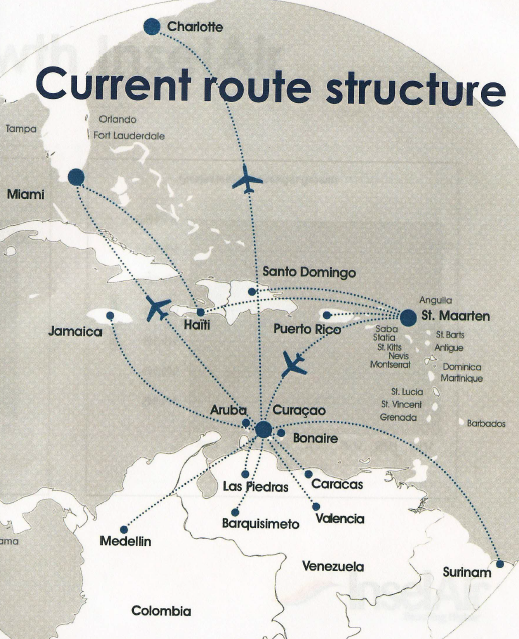 Insel has been able to develop Curacao as a north-south hub, connecting North America and the Caribbean with Latin America. For example, Insel now offers connections from Miami to four destinations in Venezuela, three of which do not have any non-stop service to the US.

Transit passengers, which now account for a majority of InselAir’s traffic on international flights, has been critical to growing the carrier’s business. The Dutch Antilles has a very small and limited home market. The entire island chain has a population of only 200,000 people.

Insel expects to carry over one million passengers next year

InselAir has grown rapidly since launching services in 2006. The group expects to carry about 800,000 passengers this year and 1.2 million passengers in 2012. This year alone InselAir has added four destinations – Medellin in Colombia, Charlotte in the US and Barquisimeto and Caracas in Venezuela. 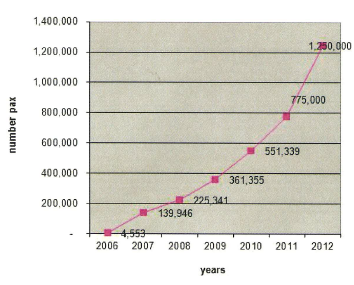 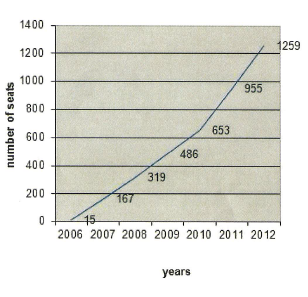 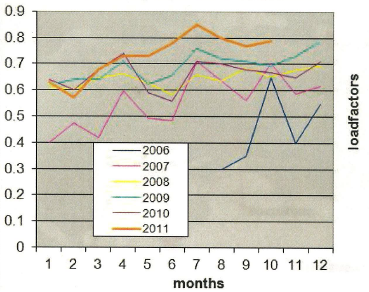 InselAir has been profitable since 2007. The carrier’s revenues are projected to exceed USD100 million for the first time this year.

The carrier credits its success, despite the very small size of its home market, to its flexibility. InselAir is not afraid to trial new routes with two or three weekly flights, several of which have proven successful.

The carrier has also had success operating routes which do not involve the Dutch Antilles such as Miami-Port au Prince, which is now InselAir's second largest route after Curacao-Aruba. Mr Kluyver says InselAir has been able to tap the US-Haiti market by opening an office in the Little Haiti neighborhood of Miami and working with local agents. It also offers a uniquely Haitian product on the Miami-Port au Prince route, which is served daily with MD-83s.

In addition to Curacao, InselAir has a relatively large operation at Saint Marten, where it serves Port Au Prince, San Juan in Puerto Rico and Santo Domingo in the Dominican Republic as well as Curacao.

Insel’s small and close-knit ownership group, which includes Mr Kluyver, sees opportunities throughout the Caribbean. Mr Kluyver says the Caribbean market is growing and there is now enough demand to offer more direct connections within the region. He says traditionally many city pairs were served via Miami but this is no longer necessary.

Mr Kluyver told CAPA at the ALTA Airline Leaders Forum in Brazil earlier this month that the group is now talking to authorities on several different islands about establishing new Insel subsidiaries. He says the group is not interested in establishing joint venture carriers with local governments, believing Insel’s success in a region filled with unsuccessful government-owned carriers has come because it is privately owned. Insel, however, is open to receiving incentives from local governments and establishing joint marketing campaigns to promote new services.

The Caribbean region has seen significant consolidation in recent years as several carriers have failed and mergers have been pursued. The consolidation in the region could create opportunities for Insel to establish a pan-Caribbean group, filling the void left by other carriers while also pursuing new growth markets. While Insel has so far focused primarily on the Dutch Antilles, Mr Kluyver says the group is now also looking at opportunities in other parts of the Caribbean.

Meanwhile Insel sees opportunities for further growth in its current home market of the Dutch Antilles. While Mr Kluyver sees potential for adding services to the US and Canada following the successful launch of Curacao-Charlotte services earlier this year, it is mainly looking south. There are now limited connections between the Caribbean and South America but growing demand for services between the two regions.

Mr Kluyver says Insel is hoping to begin serving Ecuador and Brazil next year, which would give the group services to five South American countries. It is also looking at launching service to Maracaibo, which would be the group’s fifth destination in Venezuela. 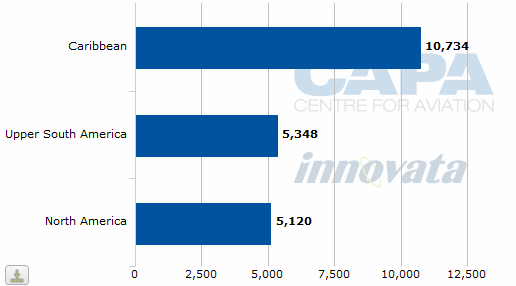 The Ecuador service would fill a void left by KLM, which until earlier this year operated an Amsterdam-Bonaire-Quito route. KLM dropped the stop in Bonaire in favour of new non-stops to Quito, leaving the Dutch Antilles without a direct connection to Ecuador. Mr Kluyver says the Dutch Antilles-Ecuador market developed over the years as a result of the KLM route, proving there is enough demand support a two or three times per week point-to-point service. Insel, however, plans to serve the Dutch Antilles-Ecuador market with an Aruba-Guayaquil flight because the high altitude restrictions in Quito prevent the group from serving Ecuador’s capital.

The Sao Paulo flight will also be served from Aruba and initially start with two or three weekly flights. Aruba-Sao Paulo will be by far the group's longest flight but is feasible because one of the MD83s Insel is acquiring has been modified to support flights of up to six hours.

InselAir had been a member of ALTA until 2010 when the association removed InselAir and three other airlines after adopting a requirement that all members be IOSA-certified. InselAir has now completed an IOSA audit, which is a key step in that it also allows the carrier to pursue codeshares. InselAir Aruba will need to go through a separate IOSA audit after the new Aruban subsidiary is launched.

Insel has been focussing this year on adding airline partnerships. It now has interline agreements in place with Air France, KLM, Gol, Winair, Blue Panorama, Avianca, US Airways and Surinam Airways.

Mr Kluyver expects several of these interline partnerships will be upgraded to codeshares. “I want to work with all airlines to make connections as efficient as possible,” he says.

Mr Kluyver says now that InselAir is IOSA certified it will also seek membership in IATA. While the carrier works hard to keep its costs low, the Insel group believes it needs to continue to offer a full service and rely heavily on GDSs.

Insel is attractive to international carriers serving the Caribbean primarily because of its inter-island network. A large portion of Insel’s passengers connect onto medium- and long-haul flights.

Insel mostly uses its four MD82s for short-island hopping flights of one hour or less. Mr Kluyver says InselAir now has a 90% share the market within the Dutch Antilles.

Mr Kuyver says MD80 series aircraft are ideal for short missions and as a result the group is currently not looking at potential replacements. “The MD is still doing the best job for short sectors,” he says.

Insel has quietly emerged as an unlikely success story in the Caribbean, a region which historically has been characterised by unprofitable government-owned airlines. Establishing in Aruba is a natural step given its Dutch Caribbean roots. The group will look to further build on its success by establishing carriers further afield.

While a relatively small market, there are opportunities throughout the Caribbean for new niche carriers. Launching independent carriers, however, is a risky proposition because most of the region’s markets lack the economy of scale needed for a successful new venture. Launching carriers under a pan-Caribbean group is a more enticing proposition. Insel is one of only a few companies in the region willing and able to develop such a group.