The private airport sector organisations in Latin America that are most often in the news are those like Corporación América and the European operators that have taken a stake in various Brazilian airports.

But there are a number of smaller ones based there which play an important role in expanding the sector throughout the region.

One of them is Odinsa; Odinsa is progressing a ‘new airport’ project in Cartagena, Colombia, which is allied to the existing airport there and is scheduled to open within three years.

It may also help sustain a pre-pandemic tourist boom in Colombia, a country once considered taboo by western tourists.

Odinsa’s Vice President of concessions, Andres Ortega, reports that the ‘New Cartagena Airport’ in Colombia will feature a 70,300sqm terminal, 17 gates and a 3100m runway. Mr Ortega added that the airport would initially have capacity to handle about eight million passengers per annum, with plans eventually to increase capacity to 45 million per annum, in addition to building a second runway.

The project – managed by Odinsa and Conecta Caribe and essentially an addition to the existing airport, with the new facility operating in parallel with Cartagena Rafael Núñez International Airport – is in the final stages of its feasibility evaluation phase; the anticipated opening date is 2025.

The Medellin-based Odinsa is not so well known globally as a Latin America airport developer, compared to (say) Corporación América (Argentina) and the private sector group airport operators in Mexico, but it is a significant player all the same.

It is a large Colombian construction and infrastructure development and publicly traded company, a subsidiary of Grupo Argos, and the largest engineering association in Colombia.

Odinsa engages in road, highway, airport and railway building in addition to real estate and private/public grant projects (through concessions). The company also does business outside Colombia – mostly in the Dominican Republic and other parts of the Caribbean. Some reports have it as one of the leading operators of transportation infrastructure worldwide.

It has quite a history in the airport sector.

Going back to 2012 it was revealed that Odinsa had submitted a non-binding offer for the Portuguese airport operator ANA (which was taken over by VINCI Airports five years later).

Later it prequalified for the expansion and operation of Santiago International Airport in Chile, and in its most recent attempted transaction – one which transcended its Latin American roots – it pitched uniquely for the proposed operating concession on St Louis’ Lambert International Airport, a proposal which was subsequently withdrawn by the city. 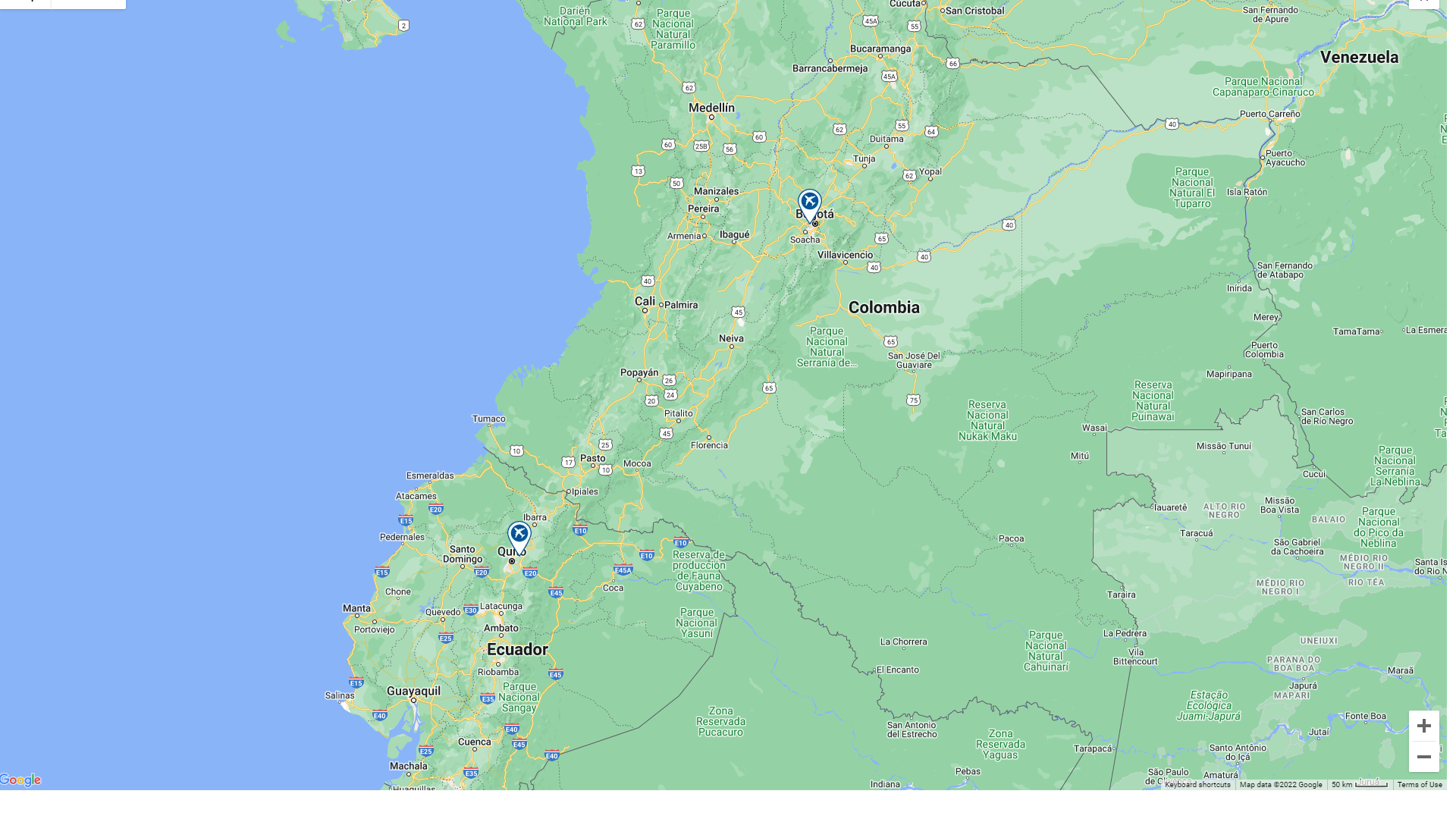 At Bogotá it operates within the umbrella of the OPAIN consortium, which also includes Colombian engineering companies and Flughafen Zürich, and from which it acquired 30% of the equity in Nov-2016 in addition to the 35% it already held, giving it a controlling stake in the asset.

At Quito, Odinsa is part of the Corporación Quiport consortium, which built the airport, acquiring its 45.5% stake from the original investor Aecon Group in 2015.

But it is the Cartagena concession by which it will make its mark. It is the majority partner in the project, having acquired 70% ownership of the initiative.

The existing Cartagena Airport is owned by the government and operated under concession by SACSA, which originally included Schiphol Group, latterly replaced by AENA.

Cartagena Rafael Núñez International Airport was the third busiest in Colombia in 2019, with 5.66 million passengers – after Bogotá and Medellin, and just ahead of Cali.

However, there was a big gap between Cartagena and the capital’s airport, which handled almost 35 million passengers in that year, or almost seven times Cartagena’s total. During the COVID-19 pandemic it has slipped back to fourth position (2020/21 and 1Q2022), having been overtaken by Cali.

Average +12.7% passenger growth in the past decade

International arrivals increased notably from 2015, after the airport halved its fees and new routes were introduced from, inter alia, Atlanta, Fort Lauderdale, Amsterdam and Madrid.

There has been a staunch recovery from the COVID pandemic, with seat capacity now (week commencing 09-May-2022) not only much higher than in 2020/21, but also +45% higher than it was in the same week of 2019, which must be some sort of record for an airport of its size.

Cargo volume has also increased to the same degree (+44%) and total 2022 cargo volume is projected – even at this early stage in the year – to be 96.5 million kilos, which is the second highest total in the past 10 years.

There are three main airlines: namely Avianca, Viva and LATAM, which jointly account for 88% of capacity, and that results in a 70%-30% capacity split in favour of more demanding full service airlines.

Utilisation of the airport as passenger traffic and capacity return dramatically is high, as the seat capacity chart below shows, for Sunday 15-May-2022.

There are compelling reasons for a ‘new airport’, which is what this development amounts to, and especially so if a second runway is added later.

When Colombia’s tourist growth is taken into account, the reasons become more compelling still. Tourism is a mainstay of the Cartagena economy, both from a historic and ‘beach’ perspective and Cartagena is a port city, although its cruise trade has almost vanished during the coronavirus pandemic. 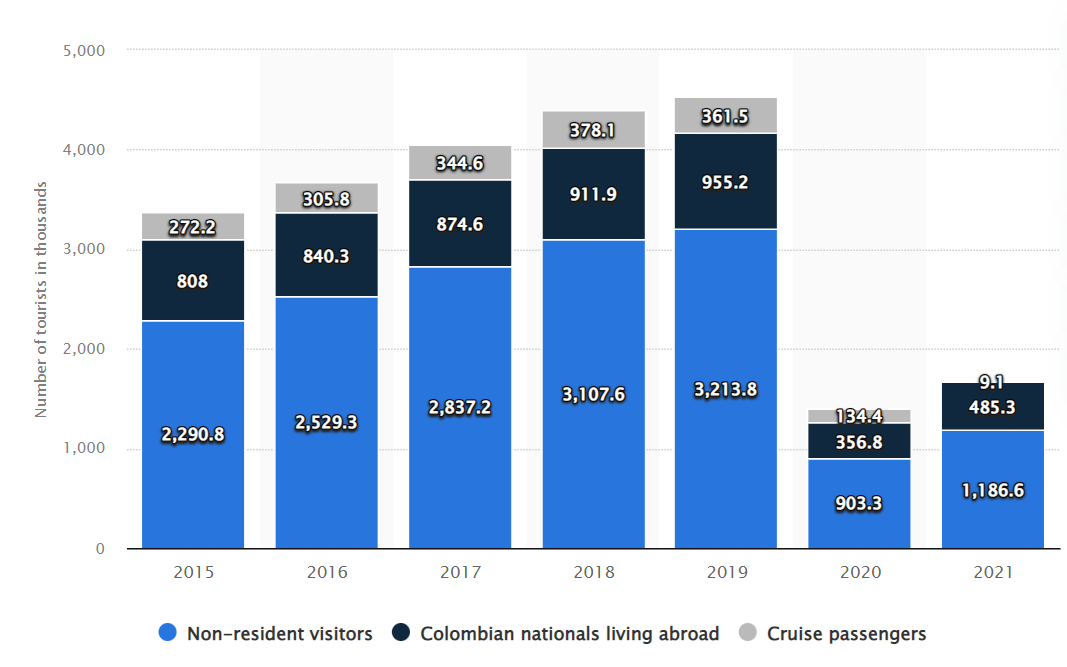 Construction Phase I is specified as follows:

It was agreed back in Aug-2019 that the project, referred to then as ‘Cartagena Airport City,’ would be carried out under a 30-year concession, out of which the first six years would be for the construction of the airport.

The project details for the terminal were:

Colombia has consistently expressed its support for the project, citing the increasing number of passengers using air transport in the country and that it could benefit the entire region.

Some confusion persists over sharing of government support

The Transport Minister Jorge Rojas said that this project wouldn't “diminish” the existing Rafael Nuñez Airport. That could be interpreted in different ways, for example, that some safeguards will apply to the existing arrangements for that airport so that an entrenched operator would not suffer on account of another one.

On the other hand, he also said that if the current concession remains in place, the structure covered by it will receive investments for its infrastructure and development over the next seven years. That could mean that the new terminal operator could find itself disadvantaged by support given specifically to existing infrastructure.

It is already the case that limited expansion works to the existing infrastructure have taken place during the past few years – ostensibly to handle demand increases until the new terminal opens.

So there may still some obstacles to overcome, but notwithstanding them the Cartagena airport could ultimately become a flagship project for Odinsa.