A recent expansion by JetBlue in Colombia through new flights from Fort Lauderdale appears to be just the beginning of the carrier’s plans to expand in the country and throughout Latin America. JetBlue envisions replicating the success it has achieved in the Colombian market, which it first entered in 2009 with a daily Orlando-Bogota flight, by increasing destinations in Colombia from Florida and possibly New York. Its success in Colombia may also persuade JetBlue to decide to penetrate further into South America, possibly with widebody aircraft at some point in the future.

Currently the Caribbean and Latin America region accounts for about 25% to 30% of JetBlue’s total capacity. The carrier during the last few years has made a concerted effort to build-up its presence in the Caribbean from its hub at JFK and its large bases at Orlando and Fort Lauderdale in Florida and at San Juan in Puerto Rico. But its Latin American network now comprises just four destinations: Cancun, Mexico; Liberia and San Jose, Costa Rica; and Bogota, Colombia.

JetBlue made a key strategic move in its Latin American expansion in May-2012 when it launched service from Fort Lauderdale to Bogota, joining the carrier’s existing Orlando-Bogota pairing. The case for adding a second flight from Florida to Bogota was straightforward for the carrier as it enjoyed the highest load factor among US carriers serving Colombia during 2011.

Data from the Colombian CAA show loads on JetBlue flights during 2011 between Bogota and Orlando were 89%. In comparison, Spirit Airlines had an 84% load factor on its Colombia-US flights in 2011 and American Airlines had an average load factor of 80%. Spirit serves Bogota and Cartagena from its Fort Lauderdale base while American serves Bogota, Cali and Medellin from Miami.

During 1Q2012 loads remained relatively strong on JetBlue’s Orlando-Bogota flights at 80%. Spirit’s loads were 2 ppts higher at 82% while American’s load factors were 78%, according to Colombian CAA data.

JetBlue CEO Dave Barger told CAPA at last week's IATA AGM in Beiing that “Colombia has been really, really good for our airline” and the carrier is now looking to further expand in the Colombian market beyond the recent launch of Fort Lauderdale-Bogota.

JetBlue currently accounts for about 67% of the weekly seats from Orlando to Bogota compared with Avianca’s 33% share. JetBlue's quick success on the Orlando-Bogota route prompted Avianca to launch services to Orlando last year.

JetBlue now accounts for about 31% of capacity on the Fort Lauderdale-Bogota pairing, putting it on par with Colombian flag carrier Avianca and 6 ppts below Spirit’s 37% share. Colombian LCC Aires also previously operated Fort Lauderdale-Bogota but the route was dropped as part of a restructuring at Aires after the carrier was acquired by LAN, opening up a potential opportunity for JetBlue to enter the market. Aires, which was rebranded LAN Colombia late last year, has since launched services to nearby Miami.

American, Avianca and LAN Colombia all now serve Bogota from Miami, which is 43km from Fort Lauderdale. American accounts for about 50% of the seats offered from Miami to Bogota, followed by Avianca’s 34% share and LAN Colombia’s 16% share. There are approximately 12,000 one-way weekly seats available from the greater southern Florida metro region to Bogota.

American showed the highest fares on flights from southern Florida to Bogota for travel from 11-Jul-2012 through 13-Jul-2012 at USD978. Spirit had the lowest offering of USD439, but the LCC charges for essentially everything beyond the ticket price included checked and select carry-on baggage. JetBlue’s fares were the second lowest at USD581 while Avianca’s fares from Fort Lauderdale were USD734, and USD667 from Miami. LAN Colombia’s lowest fare offering was not available for outgoing travel from Miami on 11-Jul-2012, but for an itinerary spanning 12-Jul-2012 through 16-Jul-2012 its fare from Miami was USD668.

JetBlue's campaign in 2011 to secure a portion of 42 frequencies available as of Jan-2012 between the US and Colombia was driven by its success in Bogota, and the recognition of growing traffic between the two countries resulting from a rising number of Colombians now living in the US. The carrier told the US Department of Transportation (DoT) in 2011 that 2010 US Census data showed the current Colombian population in the US is roughly one million after growing 93% in the last decade. JetBlue also estimated that Hispanics of Colombian origin account for 7% of the four million Hispanic residents in Florida. In New York Colombians account for approximately 5% of the Hispanic population.

JetBlue appears poised to seize additional opportunities in the Colombian market as Mr Barger explained the carrier is examining additional service from Orlando and Fort Lauderdale. According to local press reports in Colombia, JetBlue officials also recently met with the Mayor of Cartagena to discuss the possibility of flights from New York to the northern Colombian city.

It seems more logical that JetBlue would focus most of its expansion into Colombia from Florida, where there is a larger Colombian population. New York-Bogota flights are also not possible with JetBlue's existing fleet of A320s although flights from New York to Cartagena, which unlike Bogota and most of Colombia's other major cities is at sea level, would be feasable with the carrier's existing fleet. There is currently no carrier linking New York with Cartagena but Avianca now serves Miami-Cartagena daily while Spirit offers four weekly flights between Fort Lauderdale and Cartagena.

The carrier would have no reservations in becoming the third carrier to serve the South Florida-Cartagena market given the fact it launched Fort Lauderdale-Bogota despite several other carriers serving the South Florida-Bogota market. JetBlue also has coexisted with Avianca-TACA in the Orlando-Bogota market over the last year. Its USD661 fare for travel 12-Jul-2012 through 16-Jul-2012 on this route is USD518 lower than the USD1179 charged by Avianca.

There are more potential opportunities from Florida to Colombia for JetBlue to capitalise on stimulating traffic through its ability to offer lower fares than flag carriers while offering a better product than Spirit, including free snacks and no charge for the first checked bag. For example, on South Florida-Cartagena JetBlue would offer a better product than Spirit with slightly higher fares, but a lower-cost alternative to Avianca. For travel from 09-Jul-2012 through 11-Jul-2012 Spirit’s lowest fare is USD432 while Avianca is charging USD661.

There could be even more opportunity for JetBlue in considering flights from Fort Lauderdale to Medellin and Cali. Both cities are currently served by American and Avianca from Miami. Medellin and Cali are the second and third largest cities in Colombia behind Bogota, and serve as economic centres that are contributing to the country’s 4.7% GDP growth during 2012. It would be relatively simple for JetBlue to leverage its position at Fort Lauderdale as the second largest carrier from the airport by seats offered to expand into larger Colombian cities. Fort-Lauderdale-Bogota could easily be the proving ground for flights to Medellin and Cali. 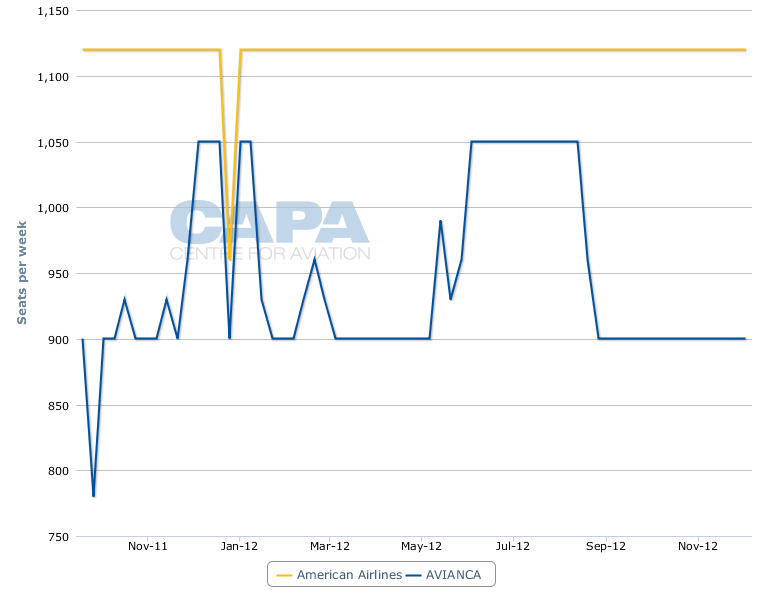 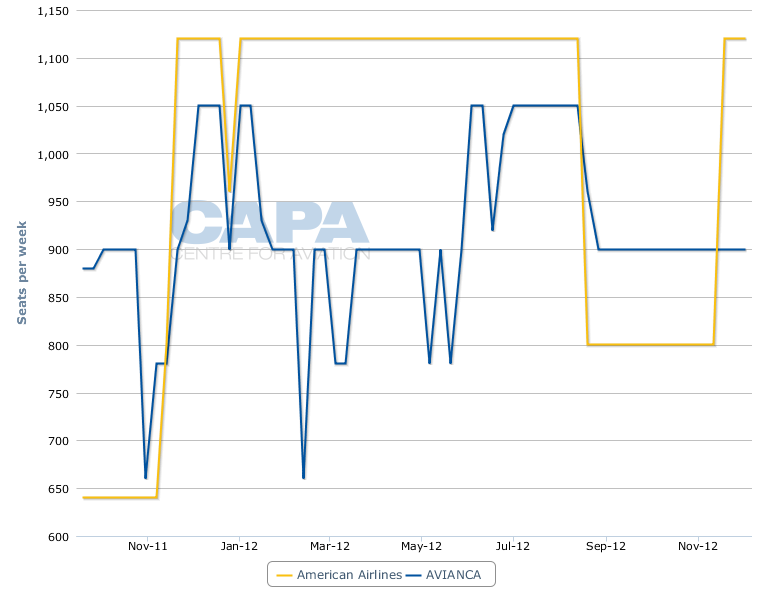 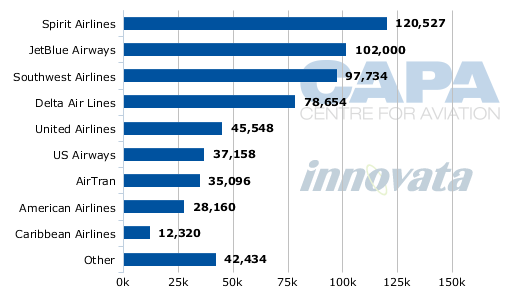 Fares from Miami to Medellin and Cali are high compared with markets that Avianca and American serve from Miami that feature low-cost flights from Fort Lauderdale. For travel from 09-Jul-2012 through 11-Jul-2012 Avianca’s lowest roundtrip fare to Medellin is USD667 compared with USD995 charged by American. On flights to Cali, American’s lowest fare is USD991 while Avianca shows USD858 as its lowest fare. JetBlue’s current fares on a 21-day advance purchase from Fort Lauderdale to Bogota are approximately USD397 lower than American and USD86 below fares offered by Avianca and LAN Colombia.

Widebodies could open up the whole continent

On several occasions in the past Mr Barger has not ruled out JetBlue forging new ground by adding widebodies to its fleet of A320 aircraft and 100-seat Embraer E-190 jets. Mr Barger told CAPA that JetBlue is only considering A350s or Boeing 787s for long-haul markets in the fast-growing Latin America rather than the mature US-European market. He says unlike in Europe, JetBlue already has a presence in Latin America which it can potentially leverage with new longer routes.

It is unlikely JetBlue will rush to place a widebody order in the near-to-medium timeframe as the first of 40 A320neo aircraft are scheduled for delivery beginning in 2017 while 30 new larger-gauge A321s will be delivered from 2013 to 2016. JetBlue firmed its order for the A320neo in late 2011 after initially announcing the deal at the Jun-2011 Paris Air Show. At the same time the carrier converted 30 of its existing A320s on order to the 185-seat A321. JetBlue now only operates one type of aircraft in the A320 family, 150-seat A320s.

Widebodies could support potential JetBlue service to Bogota as well as potential new destinations deeper into South America from its largest base at JFK. Currently the A320 cannot accomplish that specific mission due to Bogota’s high altitude, which is common at numerous airports throughout South America.

Avianca currently operates JFK-Bogota with both a 252-seat A330 widebody and a 120-seat A319 narrowbody, which can perform the flight from New York. JetBlue has studied the A319 and continues its examination of the aircraft, but Mr Barger said for now the carrier is focused on the A320 and A321. (Spirit now operates A319s along with A320s and A321s but is switching its focus to operating A320s, which deliver better economics.)

By focusing on A320s and A321s, it makes it unlikely JetBlue would offer direct service from JFK to Bogota in the short term, but if it continues to expand its Florida-Colombia service JFK would be a natural extension with larger aircraft given JetBlue’s already-established presence in the Colombian market. In addition to potential widebodies, the A320neos that JetBlue will receive from 2017 will give the carrier some extra range over its existing A320s, opening up some possible new Latin American routes. But the impact the A320neo will have on JetBlue's future Latin America network is relatively small compared to the impact A350s or 787s would have.

JetBlue partners with close to 20 airlines after recently signing an interline deal with Air China to connect passengers in New York and Los Angeles. In 2011 JetBlue signed an interline agreement with LAN for connections at JFK. It also signed a similar deal with TAM covering connections at both JFK and Orlando. Mr Barger told CAPA unaligned JetBlue is ready to partner with any Latin carrier serving JFK, touting JetBlue’s “open architecture” strategy in attracting partners to the airport, where it now accounts for about 23% of total seat capacity. 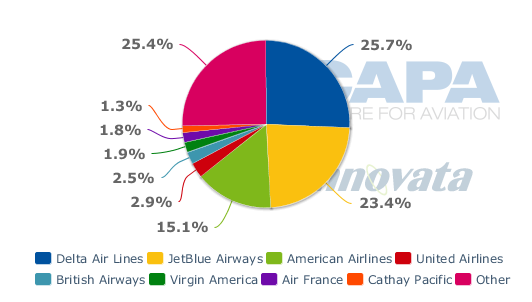 JetBlue has crafted its partnership strategy in a simple manner and all its codeshares with foreign carriers are currently one way (with its foreign partners selling on JetBlue and not vice versa). JetBlue has previously cited complexity and costs as the main reasons it has avoided two-way codesharing, but that appears to be changing as Mr Barger told CAPA that JetBlue is now considering placing its code on partner airline flights.

Mr Barger said South African Airways will likely be the first foreign carrier JetBlue sells on as the two carriers are now in talks about transitioning their existing one-way codeshare partnership to a two-way codesharing arrangement. Upgrading its partnerships with LAN and TAM into a two-way codeshare, and potentially codesharing with other Latin American carriers, would help increase JetBlue's presence in the key Latin American market and supplement expansion with its own metal.

With little penetration into Latin America the region holds great promise for JetBlue and its hybrid business model that offers low fares with frills. The carrier has ample opportunity to spread its brand throughout the region as few US LCCs serve one of the world's fastest-growing aviation markets. LCC penetration figures in the international intra-Latin America and US-Latin America markets are now very low as so far most of the LCC expansion in Latin America has come on domestic routes. JetBlue's potential new flights to Colombia would just barely scratch the surface of the carrier's growth prospects in Latin America.