Since its inception more than 12 years ago, JetBlue has undergone a fundamental shift in its business model to become one of the few carriers to achieve true hybrid status: low fares with frills. It has firmly entrenched itself in luring business travellers through a small corporate sales force and built up its network in Boston to largely cater to the more lucrative corporate traveller. This shift in strategy was primarily undertaken to even out the dramatic peaks and troughs JetBlue experienced with its leisure-focused model, and was also accompanied by a push into Latin American and the Caribbean to introduce markets with a strong base of visiting friends and relatives traffic (VFR) that JetBlue concludes is somewhat recession proof. At the same time, it has aggressively added interline partners that help to boost its passenger numbers and smooth out the revenue troughs it can experience during slow travel periods.

But that strategy is not without critics. JetBlue’s growth rates during the last few years have raised eyebrows when most carriers have constantly refined their capacity growth to near zero or have actually shrank their supply.

JetBlue counters it is still a young company in growth mode, and it justifies the expansion by pointing to its unit revenue performance. Both passenger unit revenue per available seat mile (PRASM) and yields grew by 10% in 2011, and its 5% to 7% supply growth forecast for this year remains intact after growing 8.6% in 2011. 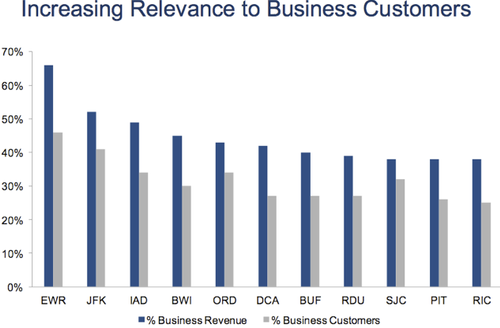 JetBlue’s efforts to attract business travellers got underway in earnest in 2009 as it launched direct corporate sales, and now calculates its business traveller mix has soared by 354% since that time to account for 15% to 20% of its passenger base. The carrier stresses since 2007 it has either doubled capacity in, or launched, 27 new markets from Boston, and its total current reach from Boston is 45 destinations. During the next three to four years, it envisions increasing its daily departures from 100 to 150 partly through the introduction of flights to more business destinations to join New York City, NY; Washington, DC; Chicago, Illinois; Raleigh-Durham, North Carolina; Pittsburgh, Pennsylvania; Buffalo, New York; San Jose, California; and Richmond, Virginia. New flights to Dallas-Fort Worth begin in Jun-2012 and will be followed by a frequency increase from seven to 10 flights per day on its Boston-Washington National offerings beginning in Jun-2012.

The carrier has explained there are other large business markets that its corporate customers have expressed interest in JetBlue serving. But the airline has said it will not add them all overnight as the investment, and spool-up time to profitability – two to three years – need to be taken into consideration. Admittedly, when JetBlue launched its corporate sales scheme three years ago it had to be aggressive on price, since it was still evolving its business markets and schedules. But the airline believes it is reaching a point where the discounts are becoming more modest as its network improves, which will improve yields in the corporate segment as its network matures.

JetBlue also explains that it while it has a presence in the global distribution systems, it really began to properly exploit the use of GDSs from a corporate traveller perspective in 2010 with a corresponding increase in penetration of the systems. Unlike some ultra low-cost carriers, JetBlue has concluded the costs of GDS are worth the return as the yields its gains through the GDS channel are USD35 to USD40 higher on average than through its own website, “reflecting the different mix of business”, says JetBlue chief commercial officer Robin Hayes.

At the same time JetBlue embarked on carving out a competitive edge in Boston, largely due to other carriers pulling down their operations in the city, it has built up its presence in Latin America and the Caribbean in markets where VFR traffic is strong. It intends to make San Juan, Puerto Rico a focus city joining its established focus regions of New York, Boston, Florida, and the Los Angeles basin. Similar to Boston, JetBlue has added doubled capacity in or introduced more than 16 new markets in the Caribbean and Latin America since 2007. The carrier described its strategy in those markets as taking a hedged position in aiming to broaden its exposure to VFR traffic and the package leisure market. JetBlue believes targeting the VFR traffic allows it to attain much stronger traffic on a year-round basis. Also similar to Boston, JetBlue seized on American Airline’s pull-down in San Juan, Puerto Rico, and during the last few years has steadily introduced flights from several destinations on the US east coast and Florida to San Juan.

It introduced its first intra-Caribbean flight in 2008 from San Juan to Santo Domingo, Dominican Republic and last year introduced flights from San Juan to St Maarten, St Croix and St Thomas. JetBlue likely sees more opportunity in San Juan as American continues to shrink its presence in the region. The carrier continues to seize on those types of opportunities as CEO Dave Barger said of its new flight that debuted from JetBlue’s New York JFK base to La Romana, Dominican Republic, “no one was flying it”. La Romana became JetBlue’s fifth destination in the Dominican Republic after it launched new service in Nov-2011.

JetBlue also serves Liberia, Costa Rica from JFK and San Jose from Orlando. It is also has one destination in northern Latin America, Bogota, which it serves from Orlando, and new flights from Fort Lauderdale to Bogota begin in May. Mr Hayes believes a lot of opportunities still exist for the carrier in the northern rim of Latin America and Central America.

JetBlue is also continuing its push from San Juan, launching new flights from West Palm Beach, Florida in May-2012. This month the carrier is inaugurating flights from Newark International Airport to San Juan and and Fort Lauderdale to Kingston, Jamaica.

Unlike business markets, the VFR and leisure markets tend to ramp up to profitability more quickly, which also helps JetBlue in balancing its revenue between a business and leisure passenger base. It also helps the carrier to keep a balance of capacity in new versus developed markets. JetBlue estimates this year that roughly 5% of its ASMs will be dedicated to new markets compared with 17% in 2007.

JetBlue supply allocated to new versus mature markets: 2007 to 2012 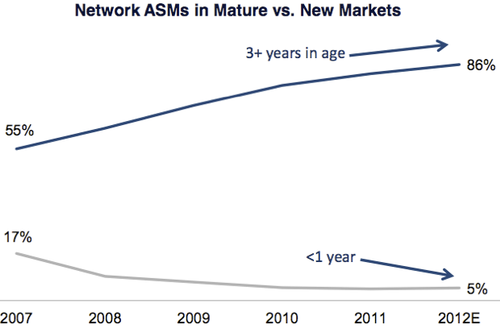 Partnerships help to keep yields up

JetBlue’s 18 interline partnerships are also key in helping to balance the seasonality it has worked hard during the last few years to flatten out. Historically, the carrier has been reticent to discuss the performance of those partnerships, but it does offer some glimpse of passenger connectivity from partners on the Boston-JFK pairing. On average in Jan-2012 JetBlue carried roughly 121 customers from its partners on the route per day, or 10 per flight. Innovata data shows JetBlue during that period had capacity for 986 passengers per day on average. At a 80.7% load factor the carrier reported for the month, partner traffic accounted for 15% of total carriage on the route. The carrier says that while a lot of those customers are incremental, it could have likely sold some of those seats on its own. However, more importantly the partnership customers help JetBlue to manage its pricing and yield curves during the slower periods for the leisure traveller in January, May, September and October.

Estimated partnership traffic from JFK to Boston: Jan-2008 vs Jan-2012 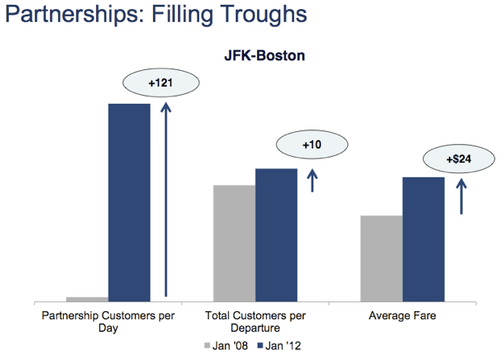 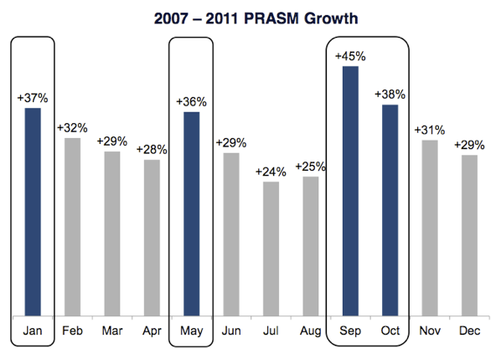 In some ways JetBlue has been a hybrid carrier from the time of its first flight from New York JFK to Fort Lauderdale in 2000 with seatback live satellite television and leather seats. It has never really billed itself as a no-frills carrier, and has steadily evolved its in-flight product over the last 12 years. It has joined the larger industry trend of merchandising and logged USD120 million in revenue last year from its 'Even More Legroom' offering. Now the carrier is rolling out an expedited security clearance for passengers dubbed 'Even More Speed' as part of its more space upsell. JetBlue is considering a trial of just offering the expedited security screening as a stand-alone product later this year. Those product offerings are much more aligned to some of the unbundling legacy airlines are offering than traditional LCCs.

JetBlue’s innovation has come at a price as its unit cost gap with US legacy airlines has decreased from 24% in 2008 to 19% in 2011. Some of the unit cost rise excluding fuel has been intentional as it made significant investments in systems including a large investment during 2010 on a new Sabre passenger service system. But ultimately JetBlue believes some of the investments are key in allowing the carrier to continue to grow its profitability. Sabre enabled JetBlue to gain more insight on its customers to help it tailor product offerings and also had the revenue management functionality to support interline agreements and codeshares.

JetBlue faced a 17% hike in its maintenance costs per available seat mile in 2011 and faces similar cost headwinds this year as a large number of its older A320s are due for heavy checks and engine checks while 18 of its 52 Embraer E190s will undergo heavy checks in 2012. The carrier is attempting to mitigate the expense by working with Airbus, Boeing and maintenance suppliers. JetBlue is also working with GE to forge a power-by-the-hour maintenance agreement on the CF34 engines powering its E190 fleet. 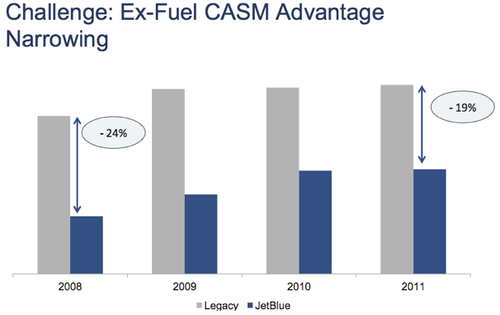 The carrier is also implementing a management hiring and salary freeze this year.

In the short term, the spike in fleet maintenance will continue to affect JetBlue’s unit costs, which are expected to rise 2%-5% this year. But the carrier stresses it does still maintain a cost advantage, noting its unit costs excluding fuel on a stage length adjusted 1000 miles are just above Southwest, which is also battling a rise in costs.

JetBlue’s management does acknowledge that while the carrier is taking steps to mitigate its cost burdens, “we recognise we have more work to do on the cost front”, says Mr Barger. 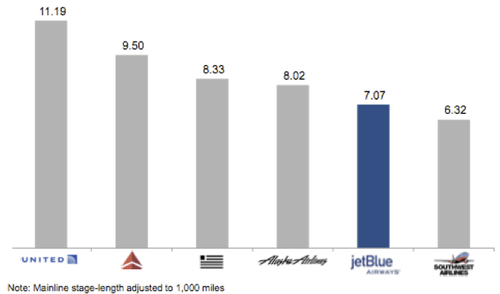 JetBlue repeatedly has to defend its growth against a backdrop of an uncertain economy and rising fuel costs. But the carrier notes that 27% of its capacity growth this year will be dedicated to Caribbean and Latin American markets, and given the growth in both Boston and the Caribbean, capacity in the rest of its network has actually fallen. The carrier also highlights in those two markets in particular it is largely backfilling service abandoned by other carriers.

In its early years, JetBlue was focused on achieving a high compounded annual growth rate (CAGR), with the carrier essentially adding a new aircraft every 10 days from 2000 to 2005. In 2006 alone the carrier opened 16 new cities.

Now during its second decade, the low-cost carrier that strives for a premium product feels justified in the growth it is undertaking as it seeks more corporate revenue to balance out its fleet network to transition from a sole focus on CAGR to attaining a return on invested capital of 1% annually for the foreseeable future. 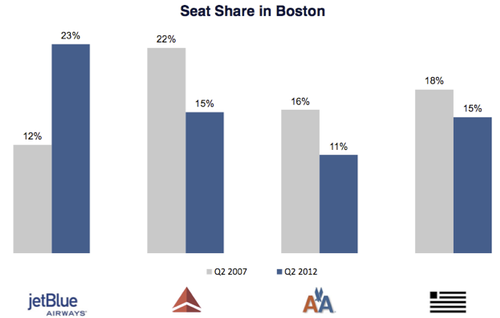 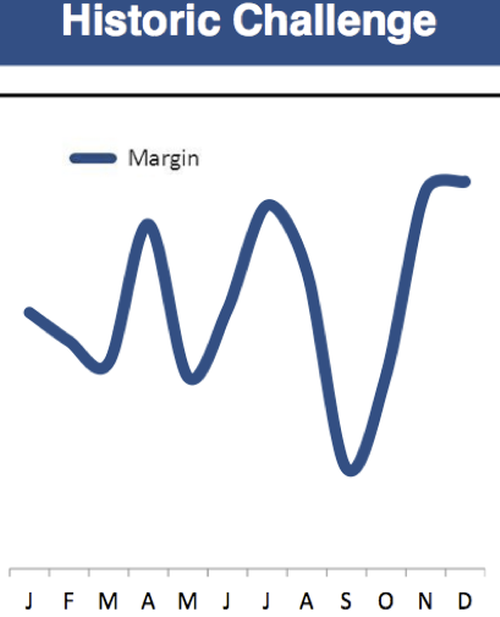