American Eagle appears closer to ending a 41-year era with the planned phase-out of its base in San Juan as part of a network overhaul in the Chapter 11 restructuring of its parent American Airlines. Closing San Juan was becoming more apparent as the fleet supporting its operations in the Caribbean – the ATR 72 – is being phased out at the end of next year. But other carriers could capitalise on American’s exit either through backfilling the flights or forging partnerships to feed the islands.

The carrier has sent out a announcement to employees in San Juan explaining the base would be closing during a phase-out period ending in March 2013, CAPA has learned.

The cuts are only being applied to American Eagle’s operations in San Juan, not American’s mainline operations.

It is not surprising the intra-Caribbean flights performed by American Eagle subsidiary Executive Airlines would be phased out since American intends to return all of its ATR 72 turboprops by the end of 2013. At the end of February the carrier had returned 21 of the aircraft, and said the remaining 18 would be phased out commencing this year and continuing through 2013. Executive operates nine ATRs from San Juan to approximately 15 destinations, based on current schedules from CAPA and Innovata.

The wind-down of San Juan began nearly four years ago in Sep-2008 when American opted to cut daily departures by 45% from 93 to 51. Mainline departures fell from 38 to 18 while Executive’s departures dropped from 55 to 33. The moves in San Juan allowed American to move some of the 66-seat ATR turboprops to its Dallas hub as the 30-seat Saab 340 turboprops were being phased out and American embarked on its “cornerstone” strategy to centre its flying in Chicago, Dallas, Los Angeles, Miami and New York. Now ATRs operating from Dallas and Miami are being replaced with regional jets. In the early 2000s, American and American Eagle operated more than 100 daily flights from San Juan.

Most of the reductions in daily departures offered by Executive from San Juan in 2008 were frequency reductions with the exception of flights being cut to Aruba and Samana in the Dominican Republic. In 2010 American instituted more cuts, with American Eagle’s departures falling to 23 in part through the elimination of flights to Anguilla, Port of Spain Trinidad; Port-au-Prince, Haiti; and Puerto Plata, Dominican Republic. Other destinations that have been eliminated include Bonaire, Canouan, Cuarcao, Nevis and St Maarten.

Some of the obvious candidates to lose service in the first phases of the San Juan pull-down are St. Croix, St. Thomas and Santo Domingo. Those cities are served by JetBlue from San Juan with Embraer 190s, and some flights to St. Thomas and St. Croix are offered in conjunction with its partner Cape Air, which also offers its own service to Beef Island. Cape Air has also moved into fill the void vacated by Executive on flights to Nevis and Anguilla, operating those routes with 9-seat Cessna 402 piston aircraft. 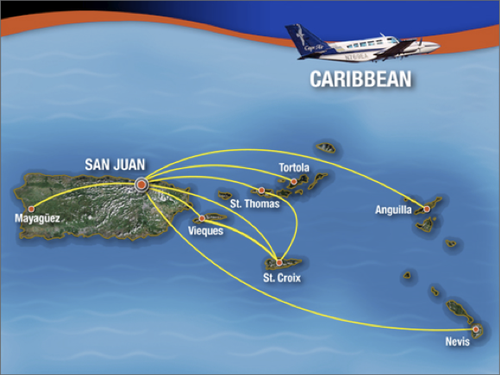 Cape Air and JetBlue have had a codeshare since 2007 largely covering flights from Boston operated by Cape Air to Provincetown and Hyannis on Cape Cod and the islands of Martha’s Vineyard and Nantucket. They could easily replicate and deepen their relationship in the Caribbean now that JetBlue is making San Juan a base city after inaugurating flights from Luis Munoz International airport in 2002.

JetBlue has solidified its commitment to San Juan by applying to serve the city from Washington National airport as a result of slots the government recently made available.  The carrier is also moving from terminal A to the larger terminal C in May of this year as it launches flights from West Palm Beach, Florida to San Juan. JetBlue also serves markets from San Juan formerly operated by American including Fort Lauderdale, Tampa, Orlando, Boston and Newark.

While larger in scale, Boston is a major focus city for JetBlue so it could easily work with Cape Air to feed into markets that are too small for the 100-seat Embraer 190s it is currently operating on its intra-Caribbean service, including Anguilla, Nevis and Beef Island.

The two carriers could even jointly manage their capacity on some flights to optimise scheduling for a specific time of day on flights to St. Thomas and St. Croix

Countries with airports that will eventually lose service from San Juan by American through its affiliates will also likely offer some incentive to carriers to step in an fill the void in order to sustain their tourists volumes even if it means stretching their budgets to ensure air service remains intact.

JetBlue and American could extend codeshare to the Caribbean

While San Juan accounts for a large seat share on flights from Beef Island, Santo Domingo and St. Croix, JetBlue represents some of the capacity to Santo Domingo and St. Croix, while Cape Air shares some of the capacity from Beef Island. For most of the rest of the destinations there is little feed to San Juan based on the number of seats offered in the markets.

As American moves through its restructuring to focus on its core markets with an emphasis on the business traveller, it is likely willing to give-up the low margin leisure traffic that Executive is feeding into its mainline flights. American also serves San Juan with mainline flights from its Chicago, Dallas, Miami and New York hubs. It also offers service from Hartford, Connecticut to San Juan, which is also served by JetBlue. American also operates a mainline flight from San Juan to Caracas, Venezuela.

American has publicly stated its desire to have more freedom to forge US domestic codeshares as it reworks its labour contracts in bankruptcy protection. But it could press for some leniency in its international network to expand its codeshare with JetBlue as that carrier continues its push into the Caribbean.

American has sought bankruptcy court approval to void its labour contracts, but has said it would also continue working toward negotiated settlements with its employee groups. If American gains concessions by force or through negotiations it could broker a similar deal to an interline pact it reached with JetBlue in 2010 covering JetBlue flights out of JFK and Boston where the carriers do not overlap, while JetBlue passengers have the ability to connect to 12 of American’s international destinations from JFK. Similar to San Juan, JetBlue has significantly built up Boston after American initiated a significant pull-down during the last decade. American and JetBlue could set-up a similar agreement covering flights to and from San Juan once Executive ceases operations at the airport in order for American to offer flights to the larger markets in the Caribbean.

A codeshare would also be beneficial if American opts to cut some of its mainline flights to San Juan during its restructuring, which could be likely as American has stressed it intends to achieve revenue generation of USD1 billion by 2017 through bolstering its international offerings and targeting premium passengers.

It remains to be seen if all of Executive’s flights from San Juan will eventually be replaced as its operations come to an end in roughly a year. But for now American remains the top carrier at the airport in terms of seat offerings, and airport and tourism executives are likely growing more concerned about the eventual loss of feed from the smaller islands. 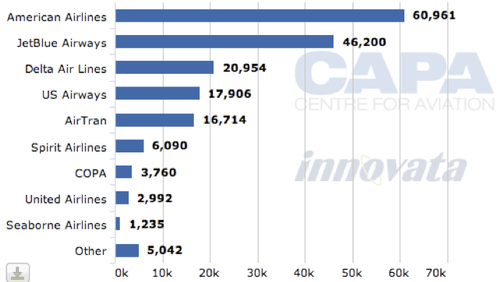