Charlotte sneaks into the top 30 airports

Charlotte Douglas’ presence in the top 30 airports may come as a surprise to many foreigners, even some Americans. Nevertheless, its passenger ranking puts it ahead of other cities, such as Seattle or Boston that are far better known to many travellers.

It is also a relatively small city, with 731,00 residents in the city limits and a metro area of about 1.75 million, far fewer than Seattle (3.44 million) or Boston (4.55 million), making it a smaller O&D market as well.

It does, however, host a number of Fortune 500 companies and is the second largest US banking centre, after New York. It is also the home of NASCAR, America’s fifth most popular sport, attracting millions of fans.

But the airport owes much of its status to the historical fact it was chosen by Piedmont Airlines as its hub following deregulation and the mad rush by airlines to expand and claim operating turf. Piedmont had been a regional airline prior to 1978 and grew quickly over the next decade, spanning the US and establishing a route to London in 1987.

However, its course was not sustainable and in 1989, through merger, it became one of the many airlines that make up the current US Airways, and one of the largest to be integrated. Throughout its evolution, US Airways has tried to maintain the hubs of many of its constituent parts but Charlotte, and US’s traditional Philadelphia home, have been the most successful. And, again perhaps a surprise, the much smaller city of Charlotte appears on the list while Philadelphia, a huge metro area, does not.

As has been the case elsewhere on the US east coast, the airport is dominated by US Airways in a way that makes it a true “fortress hub”. The hometown carrier operates just shy of 90% of all the weekly seats. Adding to this skewed picture is the fact that, unlike almost every other airport examined, there is no “other” category. The players are few and the bench is not deep. 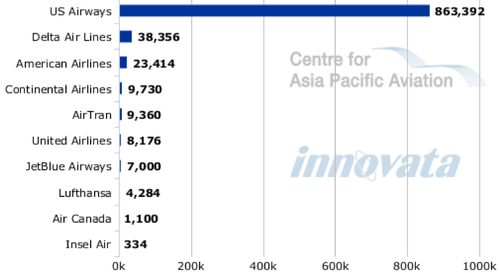 Insulated from LCCs – so far

The airport also is in a very small club of major airports with minimal low-cost presence. Southwest, unlike at Philadelphia, is absent, and the two players present operate relatively few routes at CLT. JetBlue flies to New York and Boston and AirTran to Baltimore, Atlanta and Orlando – hardly a threatening competitive offer.

Whether or not Southwest’s merger with AirTran will alter that picture is yet unknown. But if Philadelphia is any indication, the entry of Southwest could change things rather quickly. Despite a relatively short tenure at PHL, Southwest now has a 15% market share. 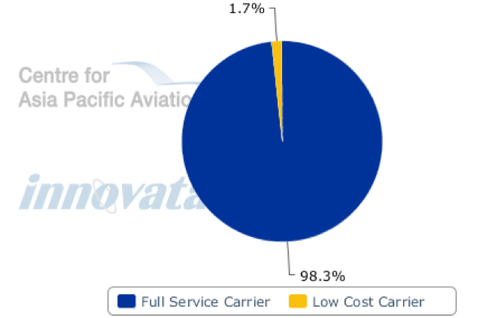 Primarily domestic but with a twist

As is normally the case with US airports, the service is overwhelmingly domestic with less than 10% of the available seats deployed on the foreign routes. 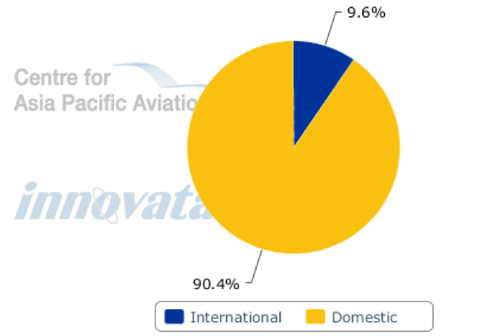 Given that CLT is the hub with the greatest US Air concentration – the carrier operates roughly 557,000 weekly seats at PHL – the distribution of international service is worth a look.

US Airways has the smallest international network of all the US majors and it is focussed primarily on Europe and the Caribbean with some flights to western Mexico. The airline has traffic rights to some Asian points but they remain unused, and its sole foray to South America is a single daily flight between Charlotte and Rio. 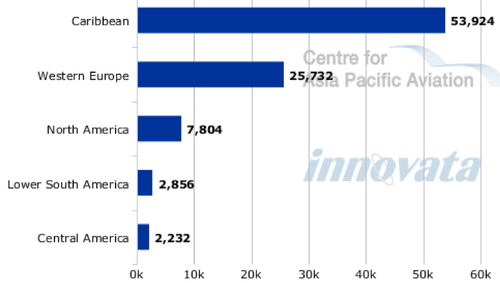 From Philadelphia it concentrates most of its services to airports with Star Alliance connections. Unlike all its US legacy peers, with multiple flights from multiple gateways, US operates only one flight per day to Heathrow—from Philadelphia. The Charlotte service uses Gatwick and is the only US hub – and one of only two cities in the US (Orlando the other) – to have access to London only via Gatwick.

While US operates to selected European cities, and Rio, from Charlotte, the airport is far more a distribution point for passengers headed for the Caribbean and eastern Mexico. 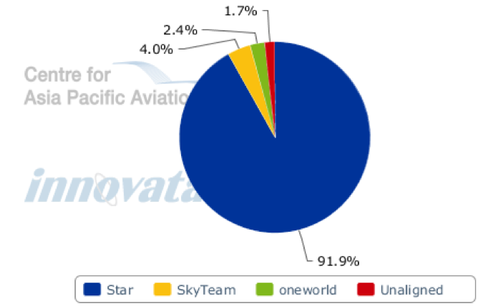 A number of years ago, Delta said that its goal with to be an international airline with an excellent domestic feed network. The reverse seems true at US Air which, other than the Caribbean where it faces stiff low cost competition, has a very limited foreign reach.

With US Air, Star rules

Star is the overwhelmingly dominant alliance but, because of the rather limited reach of the airport’s network, the alliance probably does not regard CLT as one of its prime interchange hubs.

This incredible dependence on a single carrier; one that is known to be on the market and with a CEO who constantly espouses consolidation, may make CLT vulnerable in any future mergers. The hard times that have befallen Pittsburgh, Cincinnati and St. Louis might be a warning.

The most often mentioned partner for US Airways is American Airlines, which has a small hub at nearby Raleigh and a fortress presence at Miami and, to a lesser extent, New York. Charlotte’s proximity to established bases and relatively small population base might put it on the firing line in a post-merger network.

In the unlikely event that either Delta or United might be interested, United’s entrenchment at Newark and Washington Dulles might also overshadow CLT. And Delta is already in place at New York, Memphis, Atlanta and, theoretically, Cincinnati.

Our normal look at fares to New York does not work in the case of CLT since US Airways’ service is almost exclusively to LaGuardia and its main competitors fly from other airports; Continental from Newark and JetBlue and Delta from JFK.

In the past decade, Charlotte has moved from position 39 to 25 in 2010, a good performance in a growing global airport competition. However, it pays to note that a decade ago St. Louis was at position 22, Cincinnati at 37 and Pittsburgh at 48.

In a US market where its home carrier is the smallest and weakest player in terms of size and reach, and where hub status depends on the company you keep, the folks in Charlotte might hope that Southwest gives them a closer look.