British Airways, Ryanair and easyJet outperformed the 0.7% rise in the FTSE 100 Index yesterday, gaining 5.1%, 4.3% and 3.4%, respectively. On the other side of the ledger, Lufthansa fell 3.3% as it gained regulatory approval to proceed with its acquisition of bmi. Whether bmi and Lufthansa can come to a final agreement on terms is another question, as Lufthansa has made a last gasp effort to win further concessions from Sir Michael Bishop. 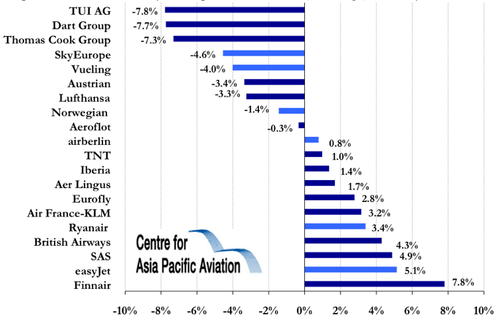 European Commission granted approval for Lufthansa Airlines proposed takeover of bmi, finding that the merging of the carriers’ services would not “not significantly impede effective competition” in Europe.

The European Commission has cleared under the EU Merger Regulation the proposed acquisition of British Midland (bmi) of the UK by Lufthansa of Germany, both active in passenger and cargo transport and related services. After examining the operation, the Commission concluded that the transaction would not significantly impede effective competition in the European Economic Area (EEA) or any substantial part of it.

Lufthansa provides scheduled passenger and cargo transport and related services (maintenance, repair and overhaul services (MRO), in-flight catering, and IT services) with hubs at Frankfurt International airport and Munich airport, and a base at Düsseldorf airport. Its subsidiaries include the airlines Swiss, Air Dolomiti, Eurowings and Germanwings. In addition, Lufthansa is in the process of acquiring Brussels Airlines NV/SA (SN), as notified to the Commission on 26-Nov-08. For the purposes of the present case, the Commission has therefore treated SN as a subsidiary of Lufthansa, which is however without prejudice to the outcome of the investigation currently being conducted by the Commission with regard to the acquisition of SN by LH.

Bmi, through its subsidiaries bmi mainline, bmi regional, and bmibaby, provides scheduled passenger transport services and has also limited cargo and MRO operations. Bmi mainline operates from its home base in London Heathrow while bmi regional and bmibaby operate from a number of bases in the UK.

Regarding passenger transport, the Commission examined the impact of the proposed transaction on a number of short and long-haul routes (see list at end). On many of these routes, the parties, which are both members of Star Alliance, already cooperate with each other. The Commission's investigation showed that LH would be unlikely to start operating flights on those routes on which it currently only markets flights operated by bmi and vice versa. The Commission therefore concluded that the transaction would not significantly impede effective competition on any of these routes. The same conclusion was reached for all other routes where the parties currently do not cooperate, as, inter alia, the combined entity would continue to face sufficient competition on these routes.

As far as the cargo transport and MRO markets are concerned, bmi's operations are limited in scope, and the Commission's investigation confirmed that the proposed merger would not have any significant impact on these markets.