British Airways and Iberia gain on decision to form JV with Japan Airlines; airberlin also up

Iberia (+3.6%) and British Airways (+3.6%) rose with the majority of European carriers on Wednesday (24-Nov-2010) after BA CEO Willie Walsh stated he is seeking ways to offer more services in Japan adding that he expects a “better economic environment” for airlines in 2011.

Iberia made the biggest gain in the IBEX 35 index as a result.

airberlin (+5.1%) gained after receiving a temporary injunction from a Frankfurt court, preventing a strike planned by the Vereinigung Cockpit union for 24-Nov-2010. The union stated it has no plans to abandon its industrial action, but will postpone it to comply with the court order.

Alitalia not ruling out merger with Air France-KLM

Air France-KLM (+3.1%) also rose for the day. During trading, Alitalia Chairman Roberto Colaninno stated he does not rule out a merger with Air France-KLM Group once the carrier improves its profitability stating: "Our goal is to make the company profitable, then we'll talk about other plans. In life, I don't exclude anything."

It was previously reported that CEO Rocco Sabelli also favours a merger with the carrier while Air France CEO Pierre-Henri Gourgeon earlier this month has stated Air France has no immediate plans to increase its stake in Alitalia.

Norwegian Air Shuttle (+5.6%) was also up at the end of trading.

Elsewhere, Meridiana Fly (aka Eurofly) (-3.9%) was the biggest decliner for the day, despite the Italian Government delayed planned cabin crew strike action planned for 26-Nov-2010. Cimber Sterling (-2.2%) was also down for the day. 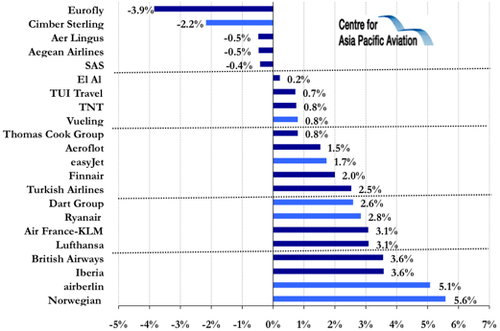