The outlook for the Asian market remains relatively bright for 2013 despite a recent slowdown in traffic growth, challenging conditions in the cargo sector, stubbornly high oil prices and continued economic weakness in Europe. While it is unlikely the peak of 2010 will be reached anytime soon, Asia remains a dynamic and generally profitable high growth market that outperforms all other regions.

The Association of Asia Pacific Airlines (AAPA) recorded 4.9% growth in passenger traffic during 3Q2012, down from the 8.7% growth recorded in 1H2012. But AAPA Director General Andrew Herdman remained upbeat during the AAPA’s annual Assembly of Presidents last week in Kuala Lumpur, saying that while traffic at its 15 members is “moderating a bit … it seems to be holding up pretty well”.

Mr Herdman says there are positive indicators, including in China despite the recent slower economic growth in Asia’s largest market. As a result the AAPA chief is “optimistic on the passenger side going into next year”. He predicts Asian passenger carriers will once again outshine other regions in 2013.

Profits in Asia and globally have decreased steadily since 2010 as “industry margins have been relentlessly squeezed by high oil prices”. Asian carriers have seen their margins drop significantly from the 6% posted in 2010 and margins are expected to remain under pressure.

But Asian airlines have continued to be more profitable than their counterparts in other regions and are again expected to account for about half of the global industry’s profits in 2012 and 2013. “Asia Pacific generally is more profitable,” Mr Herdman says. 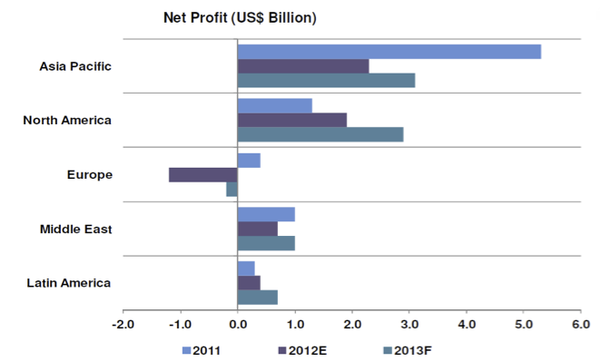 Source: AAPA, citing IATA
* Figures for 2012 and 2013 are estimates/forecasts

Asian carriers are fortunate to be in the region with the most robust passenger growth. The 5% growth in passenger traffic for 3Q2012 may seem weak by Asian standards but is strong relative to other regions. Mr Herdman points out that half of the world’s traffic growth over the next two decades is forecasted to be to, from or within Asia. 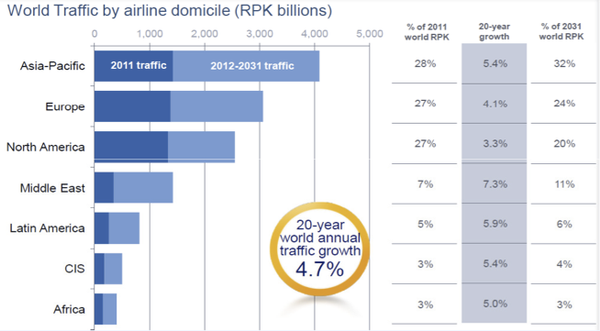 But high oil prices continue to eat into profits and will keep profit margins in Asia relatively modest. Mr Herdman says oil now accounts for about 38% of total costs, up from 32% in 2011. “It explains why we are all anxious at taking delivery of new aircraft and ordering new aircraft,” he says.

Mr Herdman adds that the cargo market, which Asian carriers rely on more than airlines from Europe or North America, also remains challenging and it is unclear when conditions will improve. “For cargo, there’s just no visibility,” Mr Herdman says.

As Asian carriers currently account for about 40% of the global air cargo market, the impact of the global cargo downturn “has a big hit on us. The fact is it is in the doldrums.”

The sluggish economy in Europe and to a lesser extent in North America is also impacting demand on some long-haul passenger routes. Those Asian carriers with large European networks have particularly been affected. But within Asia demand remains relatively strong and economies continue to grow.

While double-digit economic growth in China is unlikely to be repeated in the near to medium-term future, Mr Herdman expects GDP growth in China will still be in the high single digits in 2013. He believes this should be more than sufficient to continue driving significant growth in passenger traffic to, from and within China. “Travel demand will continue to grow,” he says, citing in particular the outbound China market as more Chinese look to travel overseas. The China to Europe market has become increasingly important to Asian carriers as they look to offset declining demand in Europe.

Cathay Pacific CEO John Slosar told the AAPA Assembly of Presidents that he is still “very bullish” on China’s future although there could be some “bumps on the road”. He points out how the Chinese economy has “covered amazing ground,” and “lifted hundreds of millions out of poverty”.

Mr Slosar and Hong Kong-based Cathay, which relies heavily on Chinese passengers to feed its long-haul network, are confident China will continue to develop positively and contribute to growth in travel in Asia overall. “I think China has done a better job than they are given credit for in managing the economy,” he says. “Against the odds they’ve done a very good job."

Dragonair CEO Patrick Yeung says GDP growth in China in 2013 is unlikely to be as high as it has been in recent years as double-digit economic growth is not expected to be a priority of China’s new government. Mr Yeung expects the new government will focus more on domestic consumption than exports. But Dragonair, a regional subsidiary of Cathay which serves 20 mainland cities in China, remains confident in the China market.

While China continues to be the largest engine for growth in Asia, other parts of the region are also seeing significant increases in demand for travel. Mr Herdman in particular points to Southeast Asia, where there is still “respectable growth”.

Some Southeast Asian markets, particularly Indonesia, are booming as income levels rise, making travel affordable to a higher portion of the population. This is leading not only to more budget passengers in the regional market but more long-haul passengers, helping offset the weaker demand in Europe.

Mr Herdman points out that Asia has become a much larger consumer market. “Asia is not just big in manufacturing but a big growing consumer market,” he says. “That’s reality. It’s no longer just a dream.” 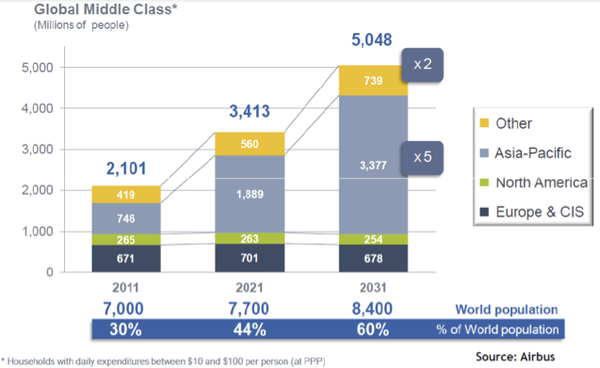 With the market dynamics in Asia remaining relatively positive, Asian carriers should be able to survive without the casualties that the industry has witnessed this year in Europe. “You just have to hunker down and get through the slump,” Mr Herdman says.

Helping Asian carriers survive their slump is their strong cash positions and high enterprise values. Leading Asian carriers continue to have higher market capitalisations than their larger counterparts from North America and Europe.

Mr Herdman pointed out how Japan Airlines has already returned to the top 10 global ranking of airlines with highest market cap. Mr Herdman called JAL “an amazing turnaround story” and pointed out how its recent initial public offering was the second largest this year after Facebook. “And the share prices hasn’t halved like Facebook,” he joked. 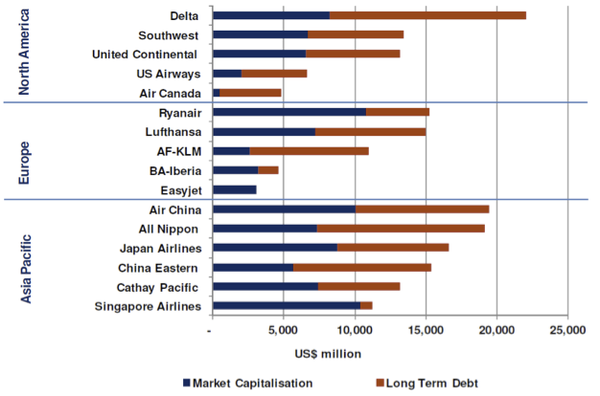 Also helping Asian full service carriers survive the slump are innovative strategies which have seen the Asian industry be at the forefront of new global partnerships and multi-brand strategies. By establishing LCC subsidiaries, several Asian full service airline groups are now well positioned to capture the anticipated growth at the lower end of the market.

While the Asian industry has been at the cusp of innovation for several years, the accomplishments of 2012 are particularly impressive. Mr Herdman specifically cited as examples the launch of three new LCCs in Japan, the launch of new SIA long-haul low-cost carrier Scoot, the launch of new hybrid carrier Thai Smile, as well as the recent partnership agreements between Emirates and Qantas and between Virgin Australia and Tiger Airways.

“Asia is at the heart of innovative thinking in our industry, the place where new business models are being refined, new partnerships created and new service standards implemented,” Mr Herdman says. “The past 12 months have proven to be pivotal for the entire industry with enterprising Asia Pacific carriers at the forefront of major developments. Ground-breaking deals which would have been unimaginable even a year ago are now turning previous rivals into long term strategic partners.”

He added: “We welcome this new competitive landscape – a landscape that provides consumers with a vast array of new travel options. A landscape that adds additional momentum to the heightened stature and influence of Asian carriers in the global industry.”

But that does not mean all airlines have responded to the challenging market conditions with similar strategies. In some cases strategies of leading Asian airline groups have diverged – as is the case with Cathy and SIA. Cathay continues to focus entirely on the full service end of the market, believing there is no need to follow SIA and most other Asian airline groups in establishing LCC subsidiaries.

Mr Slosar believes Cathay can respond to growing LCC competition using its two full service brands and in the long run will be better off without a separate budget brand. “In Asia I think we are going to go through a process,” he says.

Echoing his comments from last year’s AAPA Assembly of Presidents, Mr Slosar pointed out Europe and North America went through a similar process earlier in which budget brands of full service airline groups failed. He remains confident that Cathay will “ultimately be successful” with its current strategy but says the group remains flexible enough if market conditions dictate a change. “In this business you can never say never because it’s dynamic,” he says.

Speaking on the same panel as Mr Slosar, SIA CEO Goh Choon Phong said he respects Cathay’s strategy and pointed out how each airline faces its own unique set of dynamics, challenges and competitive landscapes. ”Our view is it is important for us in this fast changing landscape we have in Southeast Asia is to be able to react in nimble and flexible manner,” Mr Goh says.

Mr Herdman sees value in LCC brands for Asia’s fast-growing short-haul market as long as they are successful at “getting over the issues of cannibalisation and overlap”. In terms of the long-haul low-cost market he believes “there are doubts” and “the jury is still out” whether the model will prove to be successful.

While some remain more conservative than others and some strategies remain unproven, Asian airlines deserve a lot of credit for becoming more flexible and innovative than their European and North American counterparts. Asian airlines are certainly fortunate to be in the world’s biggest growth market. But without their highly respected strategies their ability to overcome the extremely challenging set of conditions confronting the global market would be limited and their outlook would not be nearly as bright.