All Nippon Airways (ANA) stated it still expects to be profitable in FY2011 despite the impact of the 11-Mar-2011 earthquake, although the carrier’s net profit result is expected to decline by 14% year-on-year amid the disruption to travel demand.

The carrier noted that traffic "bottomed out" in the second half of Apr-2011 and business demand for both domestic and international services is rebounding. ANA Senior Vice President Eiji Kanazawa, noted that Japanese aviation "remains in a severe condition, though a recovery can be seen in some parts". He added although demand for both domestic and international routes has begun to recover gradually, our view is that it will take until the end of this fiscal year for demand to return to the pre-disaster levels."

The airline will take such measures as downsizing aircraft and reducing services, as well as stimulating demand for leisure travel and trying to attract more foreign travellers, Mr Kanazawa said.

ANA, the B787 launch customer, has also deferred the delivery of four B787s according to a Bloomberg report, as it trims its capacity growth in line with demand trends. The carrier will receive 20 B787s by 31-Mar-2013, compared with 24 previously planned. ANA will receive 12 B787s prior to 31-Mar-2012, down from a planned 14. It will take delivery of eight B787s in the next fiscal year, instead of ten.

ANA noted that improved business conditions and a recovery in production levels as supply chains are restored should help support the Japanese economy. However, the short-term outlook remains unclear due to factors including restrictions on electric power distribution, the nuclear power shutdown and a steep rise in crude oil prices.

Based on the achievement of the above financial outturn, a dividend of ¥2 per share is forecasted.
Source: ANA

ANA reported a widening of net losses in the three months ended 30-Jun-2011 (1QFY2011) as domestic and international passenger numbers slumped in the period immediately after the 11-Mar-2011 earthquake. 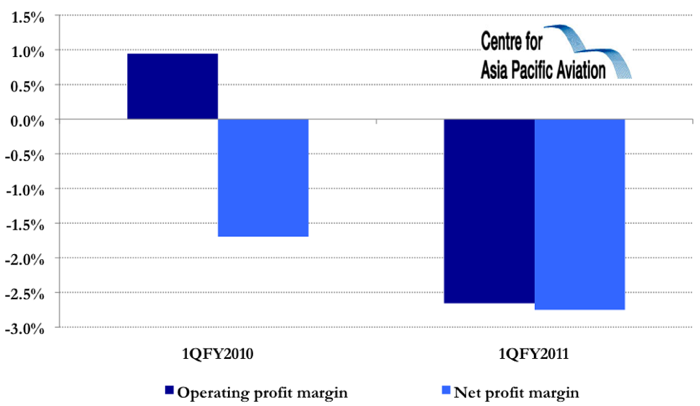 ANA stated the losses it experienced during the three months to Jun-2011 (1QFY2011) reflect the severe disruption caused by the earthquake in Mar-2011 that resulted in a significant decline in passenger numbers. However, ANA sought to minimise the impact of this with a series of initiatives to stimulate demand and reduce costs through a JPY30 billion (USD385 million) efficiency programme. 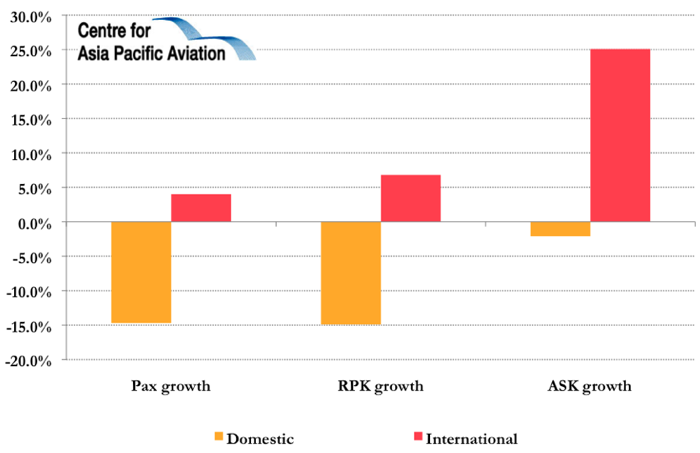 Immediately following the earthquake, there was a large decline in demand on both domestic and international routes. ANA said passenger numbers on domestic routes slumped 20% in Apr-2011, with year-on-year reductions of more than 10% in both May-2011 and Jun-2011, for a quarterly decline of 14.7% to 8.2 million. Load factors also declined heavily, by 8.0 ppts to 53.6%. Revenues declined 6.2% to JPY134.5 million. 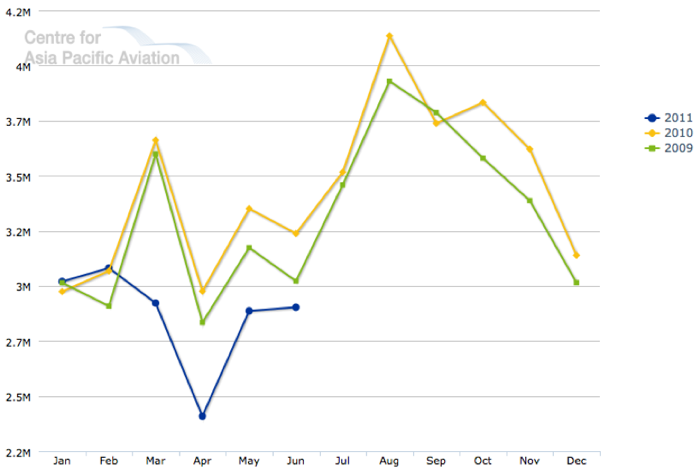 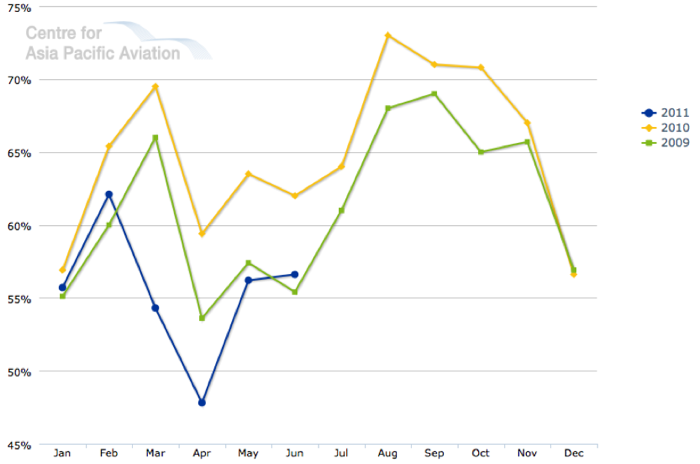 International passenger numbers increased 4% to 1.3 million in the quarter as the carrier added flights following the opening of a new terminal at Tokyo Haneda Airport. It also gained market share as Japan Airlines cut capacity as part of its restructuring plan. Load factors, however, slumped 11.2 ppts to 65.7%. International revenues increased 8.0% to JPY69.2 billion. The total number of foreign visitors to Japan slumped a record 63% in Apr-2011, according to the Japan National Tourism Organization. 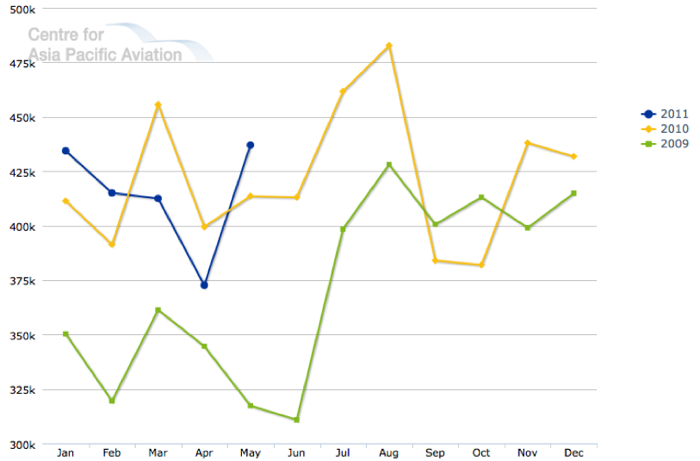 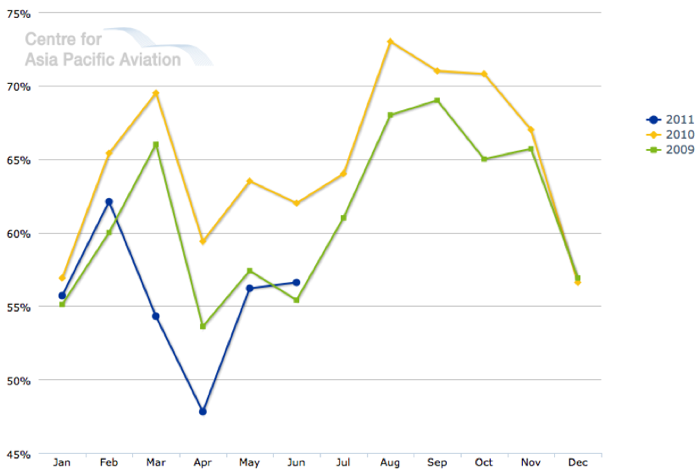 Other external factors are supporting ANA in its expansion mode, such as the capacity increase at Tokyo Haneda and Narita airports, the scheduled delivery of the B787 and a series of JVs with its alliance partners – notably the ‘metal neutral' antitrust immunity received for trans-Pacific operations with United Continental following the landmark Open Skies agreement between Japan and the USA, which will enable the carrier to fully exploit the bilateral expansion potential. ANA will also launch a strategic JV with Lufthansa part of the winter 2011 timetable between Japan and Europe. This breakthrough development was facilitated by the approval, on 01-Jun-2011, of what was the first Asian-European antitrust immunity.

Much of the forecast growth will be generated through a full offensive in the growing Asia Pacific region. ANA, as part of this, also plans to boost its cargo focus, with a continuing focus on Asian cargo shipments from its hub on the Pacific island of Okinawa. This strategy has already helped the carrier win business connecting China, Japan and Southeast Asia with ANA expecting the first profit at its cargo unit in the current fiscal year.

ANA’s membership of the Star Alliance since Oct-1999 has also created opportunities for the carrier, and ANA is now exploiting these benefits in a more effective manner through deeper coordination with its alliance members. This has delivered strong domestic connections, opened up new capacity through codeshare opportunities and significantly boosted ANA’s network and revenue potential.

A key cornerstone to ANA’s growth is the much-anticipated delivery of the world’s first B787 in Sep-2011. ANA, which has labelled the B787 “a game-changing aircraft” which marks a “new horizon for aviation and the company”, is expected to commence operations with the B787s a month after delivery.

The B787 is key to ANA's plans for international growth from Tokyo Haneda. The carrier has stated the B787 fleet will enable the expansion of the carrier’s network of 76 existing destinations. ANA, on 25-Jul-2011 stated it would operate its first revenue flight of the B787 as an international charter service from Tokyo Narita to Hong Kong. The first commercial service involving a B787 will take place approximately one month after the first aircraft is delivered to ANA, with delivery due in Sep-2011, with reports suggesting that the delivery will occur in the third week of Sep-2011. The first B787 delivered will be deployed on ANA’s regular domestic service following the charter services, either on the Tokyo Haneda-Okayama or Tokyo Haneda-Hiroshima route.

Coinciding with the B787 deliveries, ANA is taking advantage of the increased number of slots at Tokyo Haneda, which ANA believes will further enhance its competitiveness and provide the opportunity to grab back international travellers from its Asian rivals. Tokyo Haneda Airport, which is ANA’s “biggest source of revenue”, underwent a once-in-a-generation expansion in 2010 with a new fourth runway opening for the winter 2010/11 schedule, providing a massive increase in slots, including for international long-haul services. The newly available capacity at Haneda and Narita, along with JAL’s downsizing, conveniently made expansion and new entry possible for ANA. A further increase in runway slots is planned in the medium term, and this represents an opportunity for ANA Group to expand operations in what is becoming an intensely competitive business environment.

While Tokyo Haneda is a cornerstone to the carrier’s international and business-focused aspirations, ANA is also finally making the LCC plunge. ANA President Shinichiro Ito has stated the carrier is now "fully prepared for intense competition" in the Japanese market among LCC. "It is necessary to gain an advantage by moving ahead of rivals," he added.  See related article: AirAsia and ANA join forces to create Tokyo Narita-based LCC

As part of its LCC strategy, ANA is also launching what will be Japan’s first full-service low-cost subsidiary airline, “Peach”, after beginning serious preparations to enter the LCC market three years ago. The carrier expects its Peach subsidiary to exploit new demand, targeting a different customer base to its full service operations and operating out of Kansai Airport where ANA has only a limited network.

AirAsia and ANA, meanwhile, announced on 21-Jul-2011 plans to form a JV LCC in Japan to be called AirAsia Japan Co. The carriers expect the JV airline, which will be the first LCC to be based at Tokyo Narita International Airport, to commence operations in Aug-2012, subject to regulatory approvals. AirAsia Japan will be AirAsia's first venture outside Southeast Asia.

Mr Ito has stated that the two LCC ventures will compete in two different markets.

Despite the earthquake impact, ANA still expects to be profitable in FY2011, driven by JPY30 billion (USD369 million) in new cost reductions. Business travel has now recovered for the carrier, following a marked improvement in this segment since April, and ANA is now hoping tourists will be back over the peak summer period. Looking further ahead, the inevitable infrastructure rebuilding programme will have a positive impact on domestic economic activity.

ANA has proven itself as a versatile and dynamic competitor in the Japanese and wider Asian market and 2011 is shaping as a pivotal year for the carrier. ANA, which reported a recovery in annual profit and revenue in FY2010, is pursuing one of the world's most ambitious strategic growth plans as it prepares to become the first operator of B787 later this year and to launch two LCC subsidiaries in 2012.

All Nippon Airways (ANA) revenue down 0.6% – financial highlights for the 3 months ended Jun-2011: