AirAsia Bhd reported a bumper 26% increase in net profit to USD58 million in the typically slow first quarter ended 31-Mar-09 – the carrier’s best quarterly result since the final three months of 2007. The result was achieved on the back of solid increases in revenues, driven by rising passenger numbers, yields and ancillary revenues. Operating margins above 20% in the past two quarters are an outstanding achievement. But, the virtuous cycle could be broken in the second quarter as oil prices surge. In this report, we consider AirAsia’s internal strengths and weaknesses, as well as the external opportunities and threats on the business.

Click here for a full profile and updated information on AirAsia 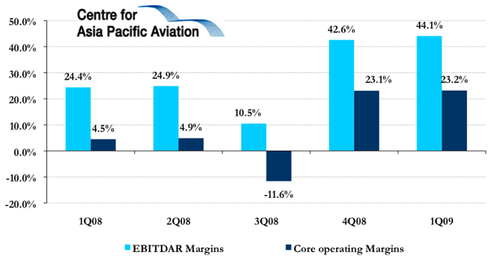 AirAsia’s core strengths remain the hallmarks of LCC success the world over – low costs and a revenue generating model built on an expanding network and the sale of ancillary items.

1. Revenue up by a third: AirAsia enjoyed a 33% lift in first quarter revenue year-on-year, as the carrier experienced a 21% increase in passenger numbers and a 12% increase in yields (Revenue per ASK), due to a 5% higher average fare and 7% increase in ancillary income. 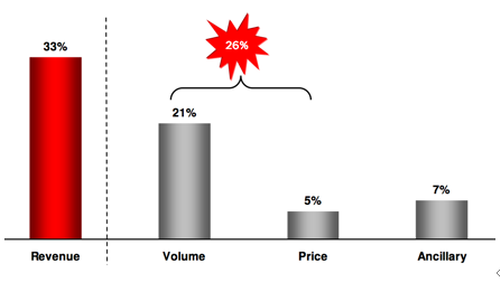 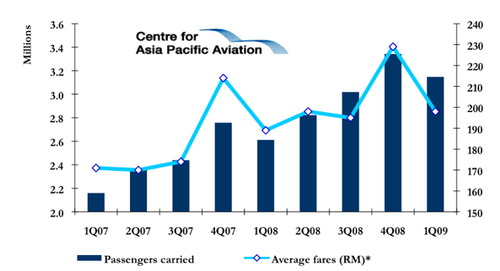 2. Diversity of markets smooths “peaks and weaks”: The AirAsia group enjoys increasingly stable yields as it now serves 116 routes, up from 104 last year. This helps considerably to smooth seasonality effects from various markets. And the synergies with its long-haul arm, AirAsia X, are rapidly growing. AirAsia X reports 80% of its Australian passengers use a connecting AirAsia flight  - a massive proportion for even the best full service hub operations. This is mutually symbiotic for the Group’s franchises and a particularly good underpinning for AirAsia X.

1. Load factors under pressure. The only weak period in the seasonality profile is the present quarter, to 30-Jun-09. And as domestic Malaysia diminishes as a proportion of group capacity (as AirAsia X and Thai/Indonesia affiliates grow), the cross-compensation of the peak April-June period also lessens. Load factors weakened in the first quarter, as capacity outstripped demand, and are expected to ease in the second as well, reflecting the changing seasonality factors and AirAsia’s aggressive capacity growth. 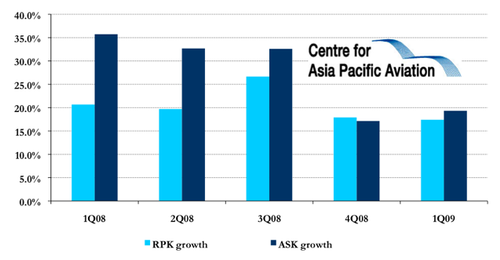 2. Aircraft financing costs surging: The global credit crunch has hit AirAsia at a crucial time in its growth phase, making financing more difficult and expensive to come by. Aircraft financing costs surged 212% in the first quarter and pressures will remain intense - at least for some months more - as it progresses through its current fleet expansion phase to 2014. The airline describes its fleet development as “disciplined growth”, with new A320 arrivals helping it replace ageing B737s in Thailand and Indonesia. As fuel costs rise, the economics of the new A320s and the advantages of  single aircraft fleet will become even more important. But the overall growth in new aircraft is considerable and will place pressure on the carrier’s balance sheet. 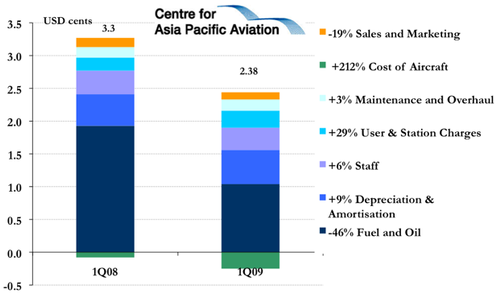 1a. Flight to value: A trebling of corporate sales: AirAsia (and rival LCCs) are reporting increasing numbers of companies trading down to LCCs (and their increasingly business-friendly networks and products) amid the global economic downturn. On the basis of growth in the past quarter, AirAsia is on track to report a trebling of seats sold to corporate clients this financial year.

1b. Flight to value: Focus on Singapore: AirAsia’s plans to double its network from Singapore from its current 26 flights per day to 56 within 12 months are central to its corporate growth strategy. The carrier boasts it already offers more daily services at Changi than Tiger Airways and Jetstar Asia – a situation that has prompted aggressive moves in recent weeks by Qantas/Jetstar to more closely integrate its offering and network at Changi.

2. Recycling routes abandoned by struggling rivals. AirAsia – and its affiliates – can continue to target rivals scorched by the global economic downturn by targeting routes they are reluctant to serve. The new Bali-Perth service is a good example of the kind of route AirAsia can leverage (in this case, through Indonesia AirAsia) to maintain pressure on its rivals and extract attractive rates and support from airport partners. We expect AirAsia to continue its development of fringe leisure routes full service carriers are abandoning.

CEO, Tony Fernandes notes, “we have already seen many airlines cut capacity, terminate underperforming routes, retrench staff and mothball a sizeable amount of their fleet. This situation provides unique long term opportunities for AirAsia...The dramatic cuts in flights and capacity by many of Asia’s legacy carriers have resulted in severe traffic decreases at many of Asia’s airports. This is creating enormous opportunities for AirAsia, as these airports compete to get our business and are more amenable to provide desirable terms and concessions to AirAsia in order to attract our airline”.

AirAsia continues to grow faster than any carrier in the region, so is well placed to compensate with frequency.

1. Oil price at six month high. Oil prices have surged to six-month highs above USD65 per barrel. Unhedged AirAsia could experience an up to 50% increase in fuel costs in the second quarter compared with an average of around USD40 per barrel in 1Q2009, which will have a major dampening effect on earnings.

2. Swine flu spread. If swine flu continues to spread and there is a major outbreak in Southeast Asia, all carriers, including AirAsia could be significantly affected. LCCs in Mexico – the epicentre of the outbreak – have reported traffic reductions in the order of 50% and the country’s full service carriers have abandoned their international expansion plans. This does not appear likely at this stage, although Japanese cancellations have escalated recently.

There is much that is positive about AirAsia's 1Q2009 result - notably confirmed solid passenger growth and yields/ancillaries. As the higher frequencies follow, increased capacity and a stronger position is established in the Singapore market, the medium term outlook remains positive.

However, the spectre of higher oil prices and the spread of swine flu, combined with AirAsia aggressive capacity growth and a possible fall in load factors, signals that AirAsia’s earnings will be under pressure in the near term, notabky the June quarter. The LCC’s share price fell more than 2% yesterday, and further share price weakness would not be surprising, if oil prices continue to rise.

Beyond the near term, AirAsia maintains all the right features to be a considerable success in the Asian aviation space. Its international franchises are contributing positively not only to the revenue and earnings, but to the stabilisation of its yields and entrenchment of its brand, in what remains a high potential market. Further exploitation of ancillary revenues is possible and will further insure AirAsia’s strong business model.

Click here for a full profile and updated information on AirAsia