Air Zimbabwe is about to move into the next phase of its rebuilding programme with the launch of three more regional services and its first long-haul service to London since the carrier was grounded under a mountain of debt in Jan-2012.

The Zimbabwe flag carrier plans to commence regional services from its Harare hub to Lusaka, Zambia and Lilongwe, Malawi, as well as to Durban, South Africa in Oct-2013. This will be followed by the resumption of service to London Gatwick in Nov-2013 with refurbished 767-200s.

Air Zimbabwe relaunched in Nov-2012, operating Harare to Johannesburg followed by domestic services from Harare to Bulawayo and Victoria Falls in Apr-2013. As part of a recovery plan the workforce has been cut from over 1,000 to about 300 and fares have been slashed as part of a three month campaign to restore public confidence the carrier which previously linked Zimbabwe to its neighbours as well as Europe and Asia.

Air Zimbabwe takes a cautious approach to rebuilding its network

Air Zimbabwe has taken a cautious approach to rebuilding its business after the Zimbabwe Government in Jan-2012 took over all USD150 million of debt owed by Air Zimbabwe Holdings, including USD30 million owed to foreign creditors and relaunching the carrier as Air Zimbabwe Private Limited. That debt had reportedly grown to about USD190 million by Feb-2013.

Air Zimbabwe has leased A320s to operate regional routes, including Harare to Johannesburg and an Embraer E145 regional jet to replace old 737-200s on the key domestic routes between Harare and Bulawayo and Harare and Victoria Falls, which are served daily. Bulawayo to Victoria Falls is also operated three times weekly.

SAA dominates the Johannesburg-Harare route with 29 weekly frequencies in the week from 09-Sep-2013 to 15-Sep-2013 according to Innovata, using a wide variety of aircraft types offering a total of 3,414 seats giving the carrier a 63.5% capacity share. British Airways flies daily on the route with 737-300 and 737-400 aircraft offering 916 one-way seats per week.

Air Zimbabwe has been faltering for the past decade

Air Zimbabwe has been faltering for the past decade, accruing a reputation which included on-again, off-again suspension from IATA and its clearing house, fuel companies refusing to re-fuel aircraft until debts were paid and threat of aircraft impoundment in multiple countries that ultimately saw disruptions and finally cancellation of all flights in Jan-2012.

But with the government having taken over its debt and providing legal protection from creditors until 2015, Air Zimbabwe plans to launch new regional routes from its Harare hub to Lusaka and Lilongwe, while also adding Durban as a second South African destination.

Lusaka and Lilongwe will both be served three times weekly with a leased 50-seat ERJ145 regional jets while Durban will be served twice weekly with an A320. Air Zimbabwe’s planned network expansion will increase the carrier’s total number of regional frequencies from nine per week to 17 per week.

In the absence a national carrier, Zimbabwe’s regional links have been served by a number of African carriers including Air Botswana, Air Namibia, Ethiopian Airlines, Kenya Airways, Mozambique Airlines, SAA, TAAG and British Airways under franchise to Comair.

Air Zimbabwe’s entry on the Harare-Durban route will break SAA’s monopoly which currently offers 200 one-way seats per week across four frequencies with a CRJ200 operated by regional subsidiary SA Express. SAA also has the Johannesburg-Bulawayo route to itself which it serves daily with an Avro RJ85 offering 588 one-way seats per week.

Air Zimbabwe faces stiff competition on the Harare-Lusaka route against heavyweights Emirates, Ethiopian Airlines, KLM and Kenya Airways as well as smaller contribution from TAAG and Air Namibia. The incumbents collectively offer 4,475 one-way seats per week, of which 42% are operated by Emirates with a daily A340-300 service operated as a tag-on to its Dubai-Lusaka service under fifth freedom rights.

Emirates became the first major carrier to enter the market in five years in Feb-2012. It has since been joined by KLM in Mar-2013 when the Dutch flag carrier was awarded local traffic rights to extend its Amsterdam-Lusaka service to Harare with an A330-200. 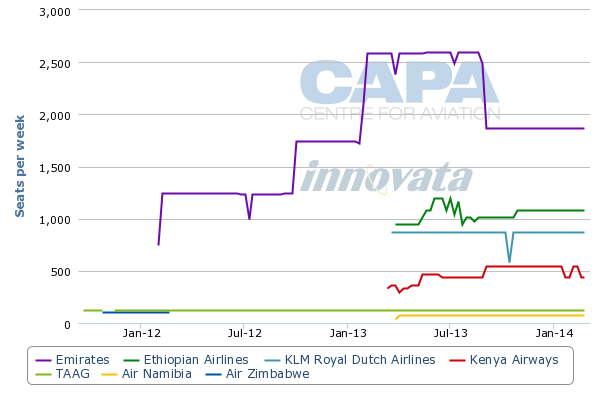 The resumption of flights to Lilongwe follows the signing of a new bilateral air services agreement between Malawi and Zimbabwe on 16-Aug-2013.

Air Zimbabwe has reduced domestic and regional fares by up to 60% in a bid to grow demand and recapture market share lost during the upheavals in 2011 and 2012. The fare campaign, which runs until the end of Sep-2013, has reduced the price of a return domestic ticket between Harare and Bulawayo to USD105 compared to a return bus fare of USD80.

According to Air Zimbabwe the campaign has increased load factors to between 80% and 90%, compared to reportedly very light loads prior to the sale and has prompted the carrier to increase capacity on its domestic network.

The fare campaign is aimed at restoring passenger confidence in the carrier by demonstrating the new fleet and improved operating reliability which was certainly not a feature of Air Zimbabwe’s previous incarnation, and also encourage passengers to get in the habit of travelling by air rather than road.

But while the fare reductions have had the desired effect, it is unclear how Air Zimbabwe will hold onto its new found passengers after the campaign ends and fares presumably return to previous levels which were unaffordable for most Zimbabweans on modest incomes. Meanwhile, the airline is undoubtedly accruing substantial operating losses at the current prices.

Air Zimbabwe is also preparing to relaunch its long-haul network with twice weekly services from Harare to London Gatwick which are tentatively planned to commence on 15-Nov-2013 according to the latest published GDS schedule. The launch date was previously delayed from 01-Jul-2013 and appears to be dependent on refurbishment of Air Zimbabwe’s two 767-200s which have an average age of 23 years.

There has been no progress update on the refurbishment programme of the aircraft or where the work is being done and further postponement of the London service is possible.

The British market has traditionally been lucrative for Air Zimbabwe due to the large Zimbabwe diaspora population of over 500,000 in Britain who currently have no direct access to their homeland.

Air Zimbabwe has indicated that it will eventually restore its entire pre-grounding network, including services to Dar es Salaam and China.

But a report by the Zimbabwe National Chamber of Commerce found that the dominance of foreign carriers on regional routes to and from Zimbabwe able to take advantage of Zimbabwe’s weak airline industry, is costing the country an estimated USD100 million a year in foreign revenue.

The government has refused to grant licences to domestic carriers to compete on profitable domestic routes between Harare, Bulawayo and Victoria Falls, as well as regional services to South Africa in favour of protecting the heavily indebted national carrier - at the expense of the economy, the ZNCC states in its report.

The ZNCC calculated that the Johannesburg routes to Harare, Bulawayo and Victoria Falls accounted for 1 million passengers in 2011 and generated over USD800 million. Air Zimbabwe generated just USD160 million of the total revenue. Extrapolating this across the network: “as a country, Zimbabwe could be losing potential earnings of over USD8 million per month to foreign airlines” according to the report.

This sort of wishful, ambiguous thinking pervades many governments' analyses of airline activity. The variables usually not fully accounted are such things as the actual cost of providing a national airline service (especially where, as here, massive subsidies are required to keep the flag carrier in the air) and the potential for partnerships - or even contract operations - with other airlines. Time and again, ambitious national flag carrier plans have resulted in massive losses to the treasury.

For small economies like Zimbabwe's, absorbing the levels of financial risk associated with owning an airline are completely disproportionate to national priorities, where the probable - and almost invariable - outcome is more subsidy.

Zimbabwe is not lacking in air services. A total of 11 foreign carriers operate services to the country. 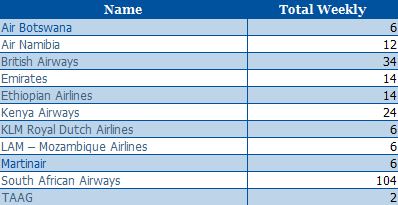 In a bid to reduce operating costs and improve service reliability, Air Zimbabwe has leased two A320s from South Jet with the first arriving in Dec-2012 and the second in Jul-2013 for use on South African routes. The latter arrival, however, is currently in storage according the CAPA Fleet Database.

The A320s have reportedly reduced Air Zimbabwe’s operating costs by 45% by replacing the 767-200s on the Harare-Johannesburg route.

Air Zimbabwe has also wet-leased an E145 from African lessor Solenta Aviation to operate domestic and regional services, replacing the 737-200s which are currently in storage. A second E145 has reportedly been leased, but the carrier has not confirmed that it has taken delivery of the aircraft.

Air Zimbabwe has announced plans to refurbish its entire Boeing fleet, comprised two 767-200ERs and two 727-200s, and its two MA-60s as a precursor to launching further regional and international services. It is not clear how far advanced the fleet refurbishment plan has progressed.

Air Zimbabwe is apparently taking prudent steps to restore its tarnished image and rebuild its network after years of instability and lengthy groundings which destroyed public confidence in the carrier.

The innovative step of sharply reducing fares to encourage passengers back on board a more modern and refurbished fleet are all positive signs that a breeze of change may indeed be wafting through the airline, all of which is being led by a new board. But how sustainable these prices are and how convinced a doubting public will be that this is a new dawn will soon be discovered.

And unless the government loosens its protectionist stance and requires Air Zimbabwe to compete with other domestic carriers on key routes, many of the gains being made will be lost and a return to its old inefficient ways is inevitable, in the process undermining the services of more efficient private carriers. This is unfortunately likely to generate losses in the short term, but if the airline cannot stand on its own feet in an increasingly open marketplace, it will merely run into deeper difficulties as time passes.