Zimbabwe has forced the issue of rising debt at national carrier Air Zimbabwe by disbanding the airline, officially known as Air Zimbabwe Holdings, and re-launching it as Air Zimbabwe Private Limited. Local reports have put the carrier's debt at USD150 million, USD30 million of which is owed internationally, including in the US and China. The ownership structure of the new airline has not been disclosed, although the Government is reportedly trying to woo investors.

The move is not a cure-all. Before the new carrier can be taken seriously, it needs not only independent management but also structural changes within government to benefit the country and trickle down to the airline.

Three decades of service with a drawn-out ending

Air Zimbabwe, in existence since 1980 and before that under different names, has been faltering for the past decade, racketing up a number of dishonours including on-again, off-again suspension from IATA and its clearing house, fuel companies refusing to re-fuel aircraft until debts were paid and threat of aircraft impoundment in multiple countries that ultimately saw disruptions and final cancellation of all flights in Jan-2012. Although Air Zimbabwe had hoped to re-launch, pilots are protesting over unpaid wages. Airline mismanagement was exacerbated by the political situation and inflation that weakened demand at home, regionally and internationally.

But Zimbabwe will try to reverse the carrier's fortunes. The Government will assume Air Zimbabwe's USD150 million of debt, which has risen from the USD140 million reported in 2011, with the reckoning being the Government will assume sole liability so the new Air Zimbabwe has a clean slate. Iraq had considered a similar move for national carrier Iraqi Airways, which has been pursued by Kuwait Airways over aircraft destroyed in the first Gulf War. It is not clear how debtors will view the new Air Zimbabwe.

The Zimbabwean Government will be straddled with Air Zimbabwe's debt and without major assets to sell from the carrier. It has reportedly considered leasing the carrier's Boeing 767s, but they are ageing and prospects are low. Some staff are expected to be transferred to the new carrier, although the first incarnation operated with a bloated workforce of about 1400 for five aircraft.

The new Air Zimbabwe will target a fleet of two aircraft suitable for regional routes, three for regional Africa flights, two or three for domestic flights and one aircraft under 50 seats to serve Victoria Falls, Transport and Infrastructural Development Minister Nicholas Goch told Zimbabwe's News Day. Seat specifics of the other categories were not mentioned, and nor was if the same type could operate domestic and regional flights.

Air Zimbabwe acquired a leased A320 in Jan-2012 and indications are that the aircraft will form part of the new carrier's fleet. Air Zimbabwe had typically operated 1980s-vintage 737s within Africa as well as 767-200s used on long-haul routes to London, and Beijing via Kuala Lumpur to link Zimbabwe with China, an increasingly important trade partner.

The proposed new fleet represents one-for-one replacement on the long-haul side but an expansion – if the new fleet is realised – for short-haul. Domestic and regional services are what Africa needs but lacks the most to stimulate growth. Air Namibia, Tanzania's Precision Air (starting Jun-2012), South African Airways and Zambezi Airlines will give Zimbabwe regional flight needs in the medium term. 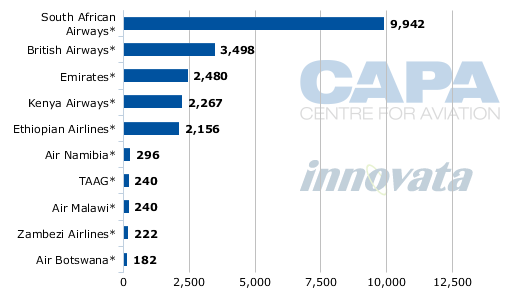 Although Air Zimbabwe held a monopoly on long-haul routes, the services were partially propped up by President Robert Mugabe and his entourage numbering in the dozens and travelling at the Government's expense. Regular and reliable service, short haul or long haul, could help offer Air Zimbabwe a service proposition and even tourists (Victoria Falls is a popular attraction on the continent), but the carrier's schedule in recent years has been anything but those two fundamental criteria. Long-haul flights in small countries are typically a source of pride, not profit. Time is well past for Air Zimbabwe to show network planning humility in exchange for financial pride. Planning long-haul services will require hubris.

For the medium term, long-haul traffic will come from Emirates, which in Feb-2012 launched five weekly services to Harare via Lusaka, Zambia with fifth-freedom rights between the two countries. Emirates is the first major carrier to enter the market in five years, and Zimbabwean officials say they expect Qatar Airways to also serve Zimbabwe as a tag-on service.

A new opportunity or business as normal without debt?

The Zimbabwean Government will have to write-off most of the former Air Zimbabwe's debt. If the Government believes in and is willing to act on the future of the country and having an airline to help it grow, absorbing the debt for a clean start is a worthy move not all nations would take up. But if the Government intends for Air Zimbabwe Mk II to return to its old business and inefficient ways, not only do neither the Government nor airline benefit but weak public perception of the situation will be further cemented.

Zimbabweans are quick to point north at the continent's stalwarts Ethiopian Airlines and Kenya Airways, which are respectively an efficiently-run national carrier and a private-public carrier. Air Zimbabwe achieving either status of those two carriers, even on a significantly smaller scale, is a worthy ambition. But Zimbabwe has yet to show how or if it can begin to work towards such a goal and avoid the debt and underlying issues it accumulated in the first place.