It is a laudable achievement given a couple of years ago the carrier was working feverishly to combat significant financial challenges and battled labour strife throughout much of 2012 in order to forge collective bargaining agreements that it believes will aid in its ultimate goal of sustainable profitability.

Obviously the carrier still has a long road ahead in proving its mettle in regular profitability, but for the moment it seems to be holding its own against increased competitive pressure from WestJet while getting its own new low-cost carrier Air Canada rouge off the ground.

Its overall revenues grew by CAD153 million (USD146 million) to CAD3.5 billion (USD3.3 billion) while expenses grew 6% to CAD3.1 billion driven by a weaker CAD against the USD, the lack of the benefit plan gains that reduced expenses during 3Q2013 and a 7% uptick in wages driven by increased profit sharing, higher salaries and a nearly 2% rise in full-time employees. Overall operating income fell 7% to CAD416 million (USD397 million). 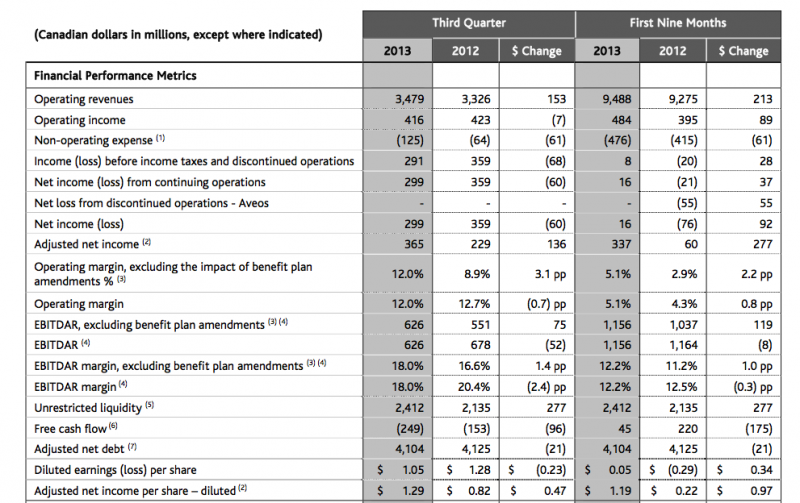 Air Canada bested rival WestJet in both those metrics as the low-cost carrier recorded a nearly 4% decline in unit revenues year-on-year during 3Q2013 and a 1.8% decline in yields. 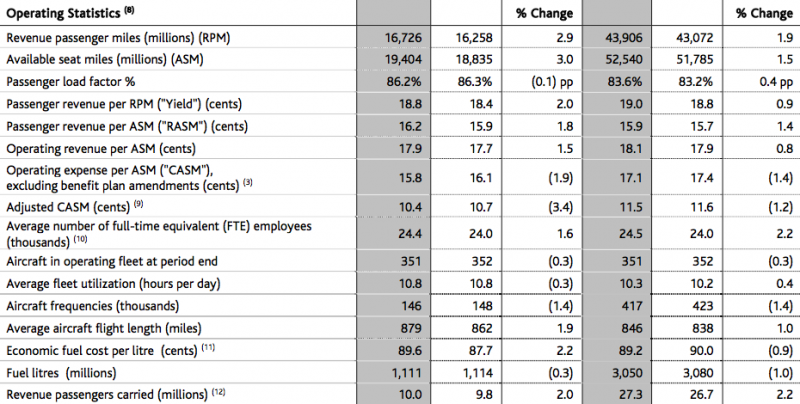 Even as WestJet’s new regional subsidiary Encore spooled up to five 70-seat Bombardier Q400 turboprops during 3Q2013 and both WestJet and Air Canada increased capacity on some Canadian transcontinental routes, Air Canada grew its top-line passenger revenues in the domestic market by 2% on a capacity increase of 2%. Yields notched up just 0.5% and unit revenues were flat year-on-year.

Most of Air Canada’s capacity increase was targeted toward frequency increases on routes from Toronto, Montreal and Ottawa to routes in western Canada and bolstering regional service within western Canada in order to compete with Encore.

During a recent discussion about Air Canada’s 3Q2013 performance, company CEO Calin Rovinescu remarked the carrier “held its own domestically” against “a much lower cost competitor”.

It is obviously a welcome turn around in the transborder space. For more than a year Air Canada has been battling industry over-capacity in transborder markets and its dilutive effects on pricing.

Similar to 2Q2013, Air Canada’s top performing region was the trans-Atlantic in 3Q2013 as unit revenues jumped almost 8% and yields increased 7.6% on a 2% rise in capacity.

Air Canada cited benefits from its trans-Atlantic metal neutral joint venture with Star Alliance partners United and Lufthansa as a contributor to the solid 3Q2013 performance, which encompasses the summer high season in the northern hemisphere. The carrier also stated the official launch of rouge in Jul-2013 helped the airline capture additional traffic from Canada to Europe. During that time rouge operated two Boeing 767 widebodies on service from Toronto to Edinburgh and Venice and flights from Toronto and Montreal to Athens, Greece.

Additionally rouge’s operations also encompass Airbus narrowbody jets to markets in the Caribbean and Latin America, and down the line, some US leisure destinations. Perhaps not surprisingly, Mr Rovinescu said that rouge was exceeding expectations in essentially all the important metrics, including yield. WestJet executives have made similar assessments after the Jun-2013 debut of Encore.

Air Canada faced challenges in its Pacific operations during 3Q2013 as it increased capacity 12% year-on-year in those markets. At the same time unit revenues plummeted 8% while yields dropped 4.8%. Some of the weaker performance is attributed to Japan’s weak currency and overall increases in industry capacity, some of which are attributable to Air Canada.

During 2013 Air Canada has introduced service from Toronto to Seoul and added frequency between Toronto and Beijing, Vancouver to Beijing and Calgary-Tokyo Narita. China Eastern has also increased frequencies from Shanghai Pudong to Vancouver while Air China (Air Canada’s Star partner) has also bolstered flights between Beijing and Vancouver. China Southern added service on its Guangzhou-Vancouver pairing.

Mr Rovinescu said Air Canada has no plans to add new routes to Asia in 2014 aside from transitioning some service from Narita to Haneda after gaining rights to serve Haneda. Air Canada presently serves Narita from Toronto and Calgary.

Air Canada’s CEO recognises that the Pacific is a key strategic region despite some of the immediate challenges the carrier is facing in the region. In fact, he remarked that if the carrier could gain acceptable slot times at Beijing, “we’d do that all day long”. But in the meantime he believes operating service to Haneda should improve Air Canada’s performance in Japan. He also concludes the six Boeing 787s scheduled to join Air Canada’s fleet in 2014 should aid in improving its trans-Pacific fortunes, noting the aircraft has an optimal number of seats. The carrier plans to unveil 787 routes in the coming months.

Air Canada’s 3.4% decline in unit costs excluding fuel (and special items and ground package expense at Air Canada vacations) during 3Q2013 was better than its initial guidance of a 1.5% to 2.5% decline. Maintenance, aircraft rent and depreciation and amortisation decreased as Air Canada works toward its stated goal of a 15% reduction in unit costs in the medium term.

The carrier’s CAD10.35 unit cost metric was still higher than the CAD8.96 recorded by WestJet, who has its own cost-cutting scheme in place to ensure it keeps the cost gap with its main competitor as wide as possible. WestJet recently stated it would deliver on a CAD100 million (USD95 million) cost-cutting scheme a year early, which is beneficial given it is battling unit revenue and yield pressure.

Canada could be on a path to building a healthy airline

Air Canada’s strong start on the road to building a long-standing and viable business is encouraging after the tumultuous times it has endured during the past few years. But the path ahead is fairly long, and the carrier has much to prove in terms of meeting its financial targets. WestJet has consistently delivered a favourable ROIC, and its 13.8% return for the trailing 12 months ending 30-Sep-2013 is a target Air Canada still needs to deliver on.

Still, two major airlines in Canada with relatively healthy financial positions bodes well for true competition to thrive. At this moment in time, Air Canada seems fit for the challenge.