After warning earlier this year that its yields would continue to be under pressure during 2Q2013, Air Canada managed to grow yields by 1.5% and record a solid financial performance for the quarter.

Overall 2013 has been much calmer for the carrier as volatile labour negotiations during 2012 led to work slowdowns that weakened its results for the first half of that year. The closure of its main maintenance provider Aveos also took its toll on Air Canada’s finances during 1H2012 when its losses widened from CAD241 million to CAD306 million year-on-year.

After recording a loss during 1Q2013 and a 1% decline in yields, Air Canada gained some traction in 2Q2013, posting an adjusted profit CAD115 million and shrinking 1H2013 losses year-on-year from CAD169 million (USD162 million) to CAD29 million (USD28 million).

As the carrier marks some improvement in its 2Q2013 financial results, it has declared lofty goals for itself in the medium to long term that entail a 15% reduction in unit costs driven in large part by seat density increases on new widebodies and aircraft operated under the banner of its new low-cost carrier Rouge. 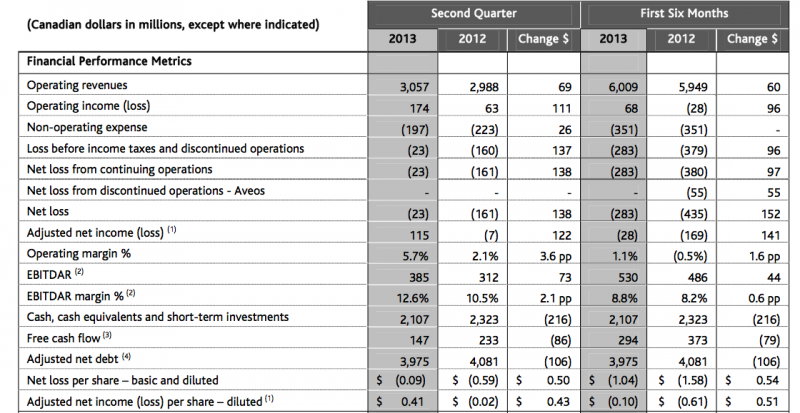 Despite capacity increases by its main rival WestJet during 2Q2013 (59% of the carrier’s overall 9% capacity growth was allocated to the domestic market), Air Canada’s performance in the Canadian domestic market was relatively stable as its own capacity grew 3% year-on-year within Canada. But traffic grew at the same rate, which kept load factors, yields and unit revenues relatively flat.

The bulk of Air Canada’s domestic capacity growth during 2Q2013 was allocated to transcontinental routes from Toronto, Montreal and Ottawa as well as a push with Bombardier Q400 turboprops into routes within Western Canada. This pressured WestJet’s results, Canada’s second largest carrier, which remarked that Air Canada’s additional capacity and aggressive pricing helped drive a negative unit revenue performance for WestJet in domestic markets.

The trans-Atlantic is Air Canada’s best performer in 2Q2013

Air Canada’s performance in its trans-Atlantic markets was especially strong during 2Q2013 as yields increased 7.7% year-on-year and unit revenues grew by 6% on 2.5% capacity growth.

The carrier remarked that the yield increase was somewhat attributable to a higher proportion of premium cabin traffic and a CAD3 million favourable currency impact. Air Canada recorded traffic growth on all its major Atlantic services with the exception of France, Italy, Spain and Greece, where it cut its capacity year-on-year during 2Q2013.

Speaking during a 2Q2013 earnings discussion, Air Canada CEO Calin Rovinescu remarked that the carrier’s favourable performance in the trans-Atlantic was also a result of prudent capacity management and the joint venture with its Star Alliance partners Lufthansa and United, “starting to cook with gas”.

He also noted the Star partners were starting to win share from other alliances. Mr Rovinescu’s remarks that the joint venture is just starting to take shape are interesting given the trans-Atlantic business partnership amongst the three Star partners was launched in early 2010. It seems it takes much longer for joint ventures within all the major alliances to spool up than originally calculated by the various airlines that participate in those schemes.

See related report: For trans-Atlantic airlines, JV benefits are less than obvious as they mature. A US perspective

A decent performance in the Pacific despite currency woes

Despite lingering currency issues with the Japanese yen and a weaker economic environment in Australia, Air Canada managed to increase its Pacific yield during 2Q2013 by 1% even as unit revenues fell 2.3%, which the carrier attributed to a decline in load factor. The majority of yield growth in Air Canada’s Pacific markets stemmed from an expansion of services to Hong Kong and China. Although the carrier did hold its own with respect to its Pacific markets, it is notable during 2Q2012 yields in Air Canada’s Pacific markets increased 12.7% and unit revenues expanded 14%.

Tough conditions remain in the US transborder market

In the capacity-laden US transborder market Air Canada’s unit revenues inched up 0.7%, which according to CFO Michael Rousseau was the company’s first unit revenue improvement in the transborder space since 1Q2012.

But yields in those markets still declined 1.7% as overcapacity and aggressive pricing continue to be an overhang in the competitive transborder space. Air Canada also noted its yields were pressured by a higher proportion of long-haul flying year-on-year in 2Q2013.

Air Canada also recorded solid results in its 2Q2013 cost performance reflected in a 1% decrease in top-line expenses to CAD2.9 billion and a 1.4% drop in its unit costs.

The decrease in top-line expenses was driven by a 6% fall in fuel costs, a 3% decrease in maintenance and a 22% drop in depreciation and amortisation. Those declines offset a 9% rise in salaries and benefits and 4% increase in expenses related to capacity purchase agreements with Air Canada’s regional partners. 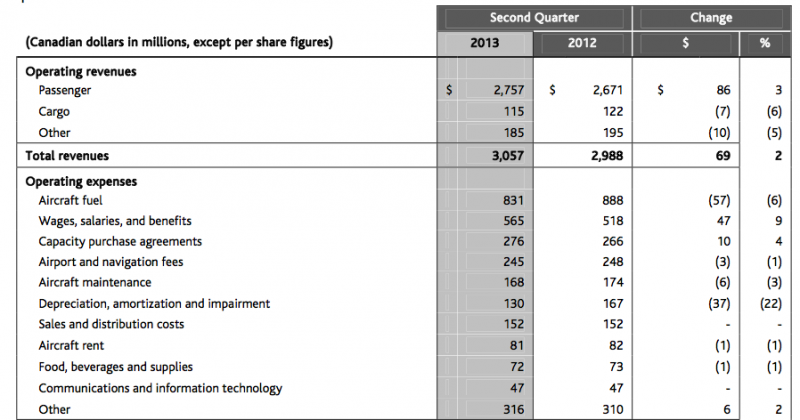 But the carrier has even more aggressive targets in the medium to long term as it believes it can achieve a 15% unit cost reduction built in part on the introduction of new higher-density, three class 458-seat Boeing 777-300ERs. The first of five is now operating one of Canada’s largest international markets – Montreal-Paris. Mr Rovinescu remarked the aircraft recently had one operation with 100% load factor. The higher density widebodies have roughly 30% more seats than the carrier’s existing 349-seat 777s, which the carrier believes will decrease unit cost on those five aircraft by 21%.

Air Canada also stresses the mix of 36 seats in Executive First Class and the 24 seats in premium economy on the new 777-300ERs will result in a marginal effect on unit revenue dilution from its operation of the higher-capacity widebody.

Other pillars of Air Canada’s strategy for a double-digit reduction in unit costs include the establishment of its low-cost subsidiary Rouge, which will operate Airbus A319s and Boeing 767s transferred from the mainline in a higher-density configuration. Air Canada estimates a 21% drop in unit costs on the A319s and a 29% decline on the Boeing 767.

One other key component in Air Canada’s goal to drastically lower unit cost is the introduction of 37 Boeing 787s to replace 767s. The company estimates a 29% fuel and maintenance unit cost reduction through the operation of the new-generation narrowbodies.

If Air Canada succeeds in achieving its unit costs goals it will further close the gap with WestJet and perhaps level the playing field in the Canadian domestic market place.

Prior to Air Canada’s tabling of its goal to drive down unit costs by 15%, WestJet warned the 30% cost advantage it historically held over Air Canada has been halved. WestJet believes it needs to widen that gap and has its own cost-cutting scheme in place.

Overall the fact that both Air Canada and WestJet are so keenly focused on costs is a positive development and ultimately shareholder friendly. But each carrier needs to ensure the projects they have undertaken to drive down costs – Air Canada’s introduction of Rouge and a widebody fleet revamp and WestJet’s new regional subsidiary and a three-year CAD100 million cost improvement scheme – are successfully executed. The devil is always in the details and in the airline industry lofty goals are sometimes unattainable, as evidenced by Southwest recently warning it would likely miss its target of a 15% return on invested capital in 2013 – the second consecutive year it has fallen short of those expectations.