For trans-Atlantic airlines, JV benefits are less than obvious as they mature. A US perspective

SkyTeam partners Air France-KLM, Alitalia and Delta are approaching the fifth anniversary of the launch of their immunised trans-Atlantic joint venture. But the major strategic moves by those airlines during the last year were squarely outside that umbrella, as Air France warmed to the Gulf carriers through its new partnership with Etihad, and Delta moved to improve its position in the London Heathrow market through an equity stake and partnership with Virgin Atlantic.

Star joint venture partners Air Canada, Lufthansa and United have been preoccupied throughout most of the last year with getting their own respective houses in order and have done little publicly to play up any advantages they are enjoying through their business partnerships. oneworld joint venture partners American Airlines and sister carriers British Airways and Iberia have been equally distracted with Chapter 11 restructurings, mergers and strikes – and meanwhile, Qatar Airways has been welcomed into the fold, further complicating the evolution of the global alliances.

The relative silence on the trans-Atlantic business relationships could either mean they are essentially humming along, or are not meeting the performance expectations set by the respective members of the three joint ventures. The reality is likely somewhere in the middle; and given the maturity of the North Atlantic market place, there are limits to the contributions joint ventures make to the financial performance of the participating carriers.

Even with decades of international operations under their belts, trans-Atlantic joint venture partners from the three global alliances faced formidable learning curves as they worked to coordinate schedules, pricing, aircraft deployment and capacity management under their newly won anti-trust immunity.

The launching of the business agreements initially did little to help lift the performance of participating carriers as capacity in the North Atlantic remained high until 2010; then members of the SkyTeam joint venture opted to slash capacity for the winter season by 7% to 9%, while Star partners opted for flat supply growth during that same time period.

But behind those declarations were miscues in just how long it would take to achieve the financial results carriers were expecting. American has previously admitted that it may have over-estimated the timing of realising benefits from the joint sales among its business partners.

United has previously stressed that its business partnership with Air Canada and Lufthansa would be an evolutionary scheme after it made payments to its partners in 2011 for out-performance. After that scenario United management commented that the carriers would get to know each other in an accelerated manner to ensure the joint venture was delivering the right-priced product to the market place. Delta has also referred to the first two years of its SkyTeam joint venture as a learning process.

The coordination among the joint venture was displayed in route adjustments during 4Q2012 as Delta eliminated service from JFK to Rome. The carrier still maintained a presence in the market through service offered by joint venture partner Alitalia. At the same time Delta assumed the operation of Air France’s Paris-Seattle route. Star partners United and SAS also executed similar adjustments as SAS kept its Newark-Copenhagen service intact while United exited the market.

Schedules in Innovata show that overall seat share between the US and western Europe fell just 0.8% year-over-year from the beginning of Dec-2011 to Dec-2012, and share of one-way seats on offer among the largest carriers operating between the two regions remained essentially stable.

But United reduced its available seat miles in the North Atlantic by 7% during 4Q2012 while Delta recorded a nearly 7% reduction. Delta led the three carriers in yield growth on North Atlantic markets during 4Q2012 at 4%. American grew yields by 1.6% while United’s yields remained essentially flat. US Airways, which accounted for roughly 4% of the US to western Europe available seats in 4Q2012, does not break out regional operations, but during a quarterly earnings discussion carrier executives stated unit revenues on trans-Atlantic routes grew 6% year-over-year during the final three months of 2012. 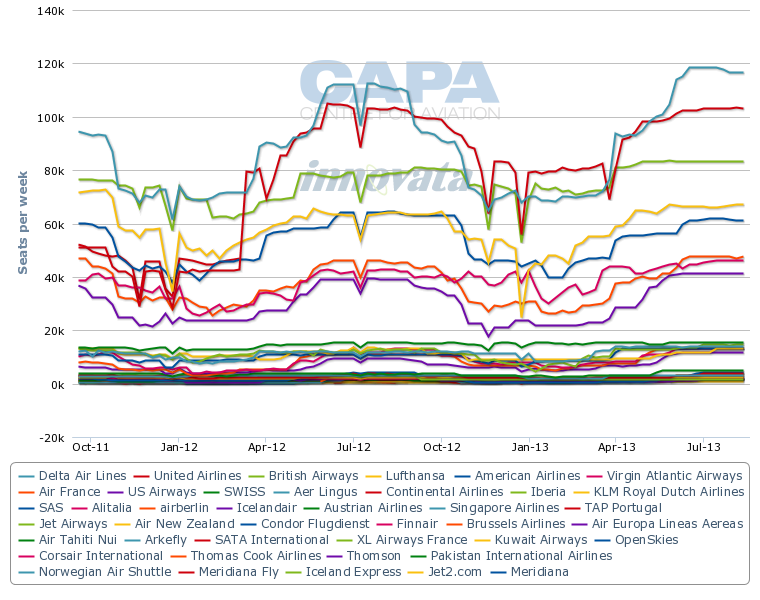 Delta’s SkyTeam joint venture partner Air France also seems to have benefitted from the smoother coordination within the immunised framework as its North Atlantic unit revenues during 2012, excluding exchange rate movements on currency, grew 10.4% on a 5.3% reduction in capacity.

See related article: Air France-KLM: why it must Transform as medium haul and cargo operations hurt the bottom line

The joint ventures established by the three global alliances in rapid succession beginning in 2008 (American and British Airways attempted to forge a joint venture many times before gaining regulatory approval in 2010) were promoted as an advanced model for cooperation among international airlines. But the reality is the worldwide aviation industry and its dynamics have changed during the last five years, and immunised business ventures, much like alliances, simply don’t provide the global scope that individual carriers require to remain competitive.

Delta concluded that even with SkyTeam’s roughly 26% capacity share over the North Atlantic, it remained weak in one of the most strategic, largest and lucrative long-haul markets – New York to London Heathrow. Its decision to take an equity stake in Virgin Atlantic and build a joint venture with Heathrow’s second largest carrier demonstrates that joint venture tie-ups born out of alliance partnerships only have so much scope.

Based on Delta’s estimates, oneworld joint venture partners American and British Airways accounted for approximately 59% of the US-Heathrow seat share in 2012. The New York-London market accounts for a major portion of that share, with 2.7 million passengers travelling between the two regions.

Top 10 US to Europe markets and US-Heathrow seat share: 2012

Based on current schedules in Innovata British Airways accounts for 35% of the seats on offer between New York and London Heathrow, American accounts for 27% and Delta accounts for 10%. Pairing Delta’s share with Virgin Atlantic’s 24% stake will give the carrier a 34% share. 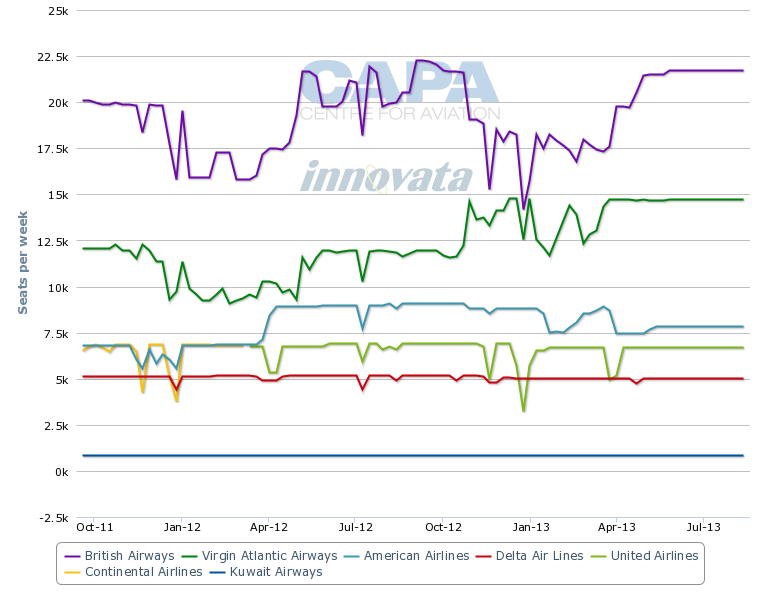 Outlining Delta’s intent to acquire a 49% stake in Virgin Atlantic and its plans to build a joint venture with the carrier, Delta CEO Richard Anderson told investors in late 2012 that the two carriers were creating the first cross-border merger opportunity, and through the trans-Atlantic joint venture the two carriers were building, “we are going to marry up our metal for operational purposes”.

Metal neutrality is often cited as a major benefit by the alliances of their trans-Atlantic joint ventures. But a few years into these tie-ups it is not clear if the ability to use a larger pool of aircraft really makes a significant difference in achieving the financial targets the carriers participating in those business ventures have set for themselves.

In some cases airlines participating in the JVs have an obvious disdain for some of the aircraft in the larger fleet accessible by the carriers in those tie-ups. Showing a slight aversion to Air France’s A380 jets, Mr Anderson stated: “We have figured how in our joint venture because we jointly price and schedule, we keep the ill effects of that airplane out of the joint venture, put it that way.”

While Virgin Atlantic has stated it would likely join SkyTeam at some point, it is probable that the carrier’s eventual membership in the grouping had no bearing on Delta’s pursuit of the airline. Improved access to Heathrow is key for Delta – in its own right – in solidifying its competitive offering in the New York market. Delta has stated its biggest vulnerability in expanding corporate share in New York is lack of access to Heathrow frequencies to compete with BA and American, and now the Virgin Atlantic tie-up gives the carrier that access.

Delta’s pursuit of Virgin Atlantic is a high-profile example of the potential shortcomings of viewing alliance trans-Atlantic joint ventures as a comprehensive solution to solving the riddle of sustaining profitability in the highly seasonal North Atlantic market.

Although the business ventures clearly provide advantages in pulling important capacity levers while allowing the participating airlines to maintain a presence in a given market, the joint venture participants seem more subdued in their excitement over the prospects those businesses hold. Part of the diminished enthusiasm stems from the joint ventures reaching a certain level of maturity. But participating carriers in those JV businesses are also realising that in the fast-changing business landscape those tie-ups have limitations in aiding participating partners in achieving necessary critical mass in some strategic markets.

At the end of the day it is the self-interest of the individual airline that defines its bottom line. The recent "break-outs" from global alliance ranks to embracing Gulf airlines as partners are a clear illustration of how each airline, under its own specific competitive pressures, will react to protect its own interests.