Up-gauging of its fleet and near-term economic pressures are dampening Southwest Airlines’ expectations for the rest of the year as executives believe US budget cuts, a looming deficit battle and rising taxes have resulted in an economic climate in the US that was worse than the carrier expected.

Southwest’s continuing integration with AirTran is also making its performance for the rest of the year difficult to predict as new markets spool up and work is continuing to optimise the combined networks. The carrier is getting some push-back related to its core performance; but still believes its same store sales are performing up to expectations.

Given its weaker than expected performance during 1H2013, Southwest is beginning to issue warnings that hitting its ambitious 15% return on invested capital (ROIC) for 2013 is growing unlikely after the carrier missed that target in 2012.

Like US majors, Southwest endured yield pressure in 2Q2013, but sees a soft economy

Southwest’s 2Q2013 net income was USD224 million compared with USD228 million in the year prior. Top line operating revenues were basically flat at USD4.6 billion while operating expenses increased 1% to USD4.2 billion, which resulted in a nearly 6% decline in operating income to USD4.2 billion. 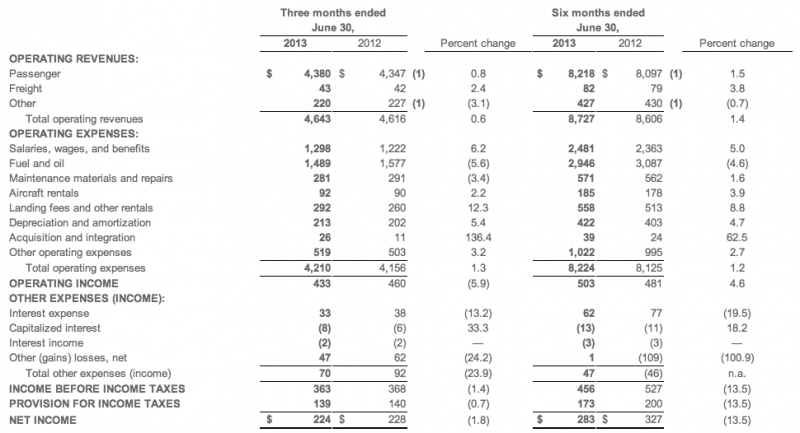 Carrier CEO Gary Kelly observed that the US economy had performed worse than the company forecast, and warned macroeconomic conditions could continue to put pressure on its business going forward.

Drilling a bit deeper into some of Southwest’s unit revenue trends, Mr Kelly stated the carrier’s monthly sequential trends began to weaken in Mar-2013. While there are some encouraging signs for Jul-2013, he remarked that the sequential trend from Jun-2013 to Jul-2013 was not “spectacular”.

He believes some of the weakness is being driven by a roughly 35% decline in government traffic (defined as passengers travelling on government rate) triggered in part by US budget cuts known as the sequester.

Perhaps to backfill some of that drop Southwest opted to discount heavily to boost its traffic and load factor during 2Q2013. Its average fare was essentially flat at USD151 while traffic increased nearly 3%. Load factors also remained flat year-on-year at about 82%. 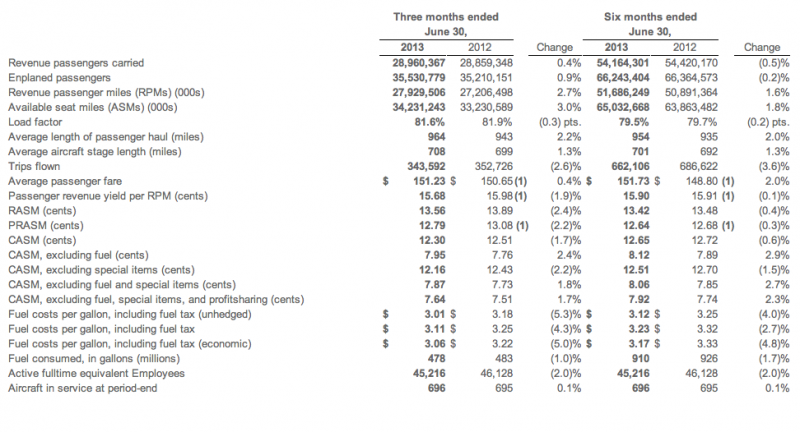 The pressure that aircraft up-gauging has put on Southwest’s unit revenues should ease a bit during 2H2013, but Ms Romo warned that some pressure from the higher number of seats will linger throughout the rest of 2013.

Southwest’s unit costs during 2Q2013 increased about 1.7% driven largely by wage inflation, benefits and airport costs. Ms Romo stressed that aircraft retrofits to add the six additional seats contributed less than 0.5ppt to the year-on-year rise in unit cost. With the retrofit complete on the carrier’s 400-plus 737-800s, cost pressure associated with the reconfigurations should ease.

Some sceptics starts to poke holes in Southwest’s core performance

Southwest did record USD40 million in incremental codeshare revenue during 2Q2013 as the two carriers launched a fully integrated codeshare in Apr-2013, and boasted USD95 million in synergies from the AirTran acquisition during the quarter, said Ms Romo.

But management during its earnings discussion was pressed by an analyst who had calculated that if the synergies were removed from Southwest’s operating profit, that metric would have fallen significantly year-on-year during 2Q2013. Using that calculation the question was posed to management that perhaps the quarterly numbers painted a disappointing picture.

Acknowledging it was a fair query, Mr Kelly stressed it was difficult to look at each of the pieces of the business separately. He countered same store sales look good; but acknowledged that there are penalties in the combined current route structure as some new markets are spooling up, noting “we have a lot more new markets under development right now than I think any of us would like."

Southwest has deployed new service from Atlanta while redeploying capacity from under-performing routes in AirTran’s network to other markets, including new transborder service to Mexico. He reiterated that Southwest needed to complete the network optimisation with AirTran.

Southwest is now moving to temper expectation that it will achieve its previously stated goal of a 15% ROIC as Ms Romo noted meeting that target is becoming more challenging and less likely.

It was always a lofty declaration.

But missing those targets for a second consecutive year is not going to instil investor confidence as the US airline industry reaches a relative period of stability. For now it seems Southwest has a lot riding on its promised network optimisation. And investors are waiting - not so patiently - to see if it delivers on those promises.