Southwest Airlines plans to aggressively grow its return on invested capital (ROIC) by 8 ppts in 2013 to 15%, driven by USD1.1 billion in revenue gains derived from schedule adjustments, new ancillary fees and an improved revenue management system. The carrier must close a wide gap in order to meet its goal after recording a 7% ROIC for the 12M ending in Sep-2012, and admitting it fell short of an original 15% target for 2012. But Southwest management is confident that 2013 is the year it will attain its often-cited return goals as it seeks to contain unit cost growth and capture USD400 million in estimated synergies from its acquisition of AirTran.

Carrier executives are tempering some of the confidence they are exuding about meeting ROIC goals with a cautious declaration that there is no guarantee that 15% returns will be displayed in the airline’s year-end 2013 results.

Southwest CEO Gary Kelly told investors in late Dec-2012 “it is not a promise, but we’re sharing with you our plan”. Previously Southwest has struck a cautious tone for 2013 as its operating profit during 3Q2012 plummeted USD174 million to USD51 million.

In late Dec-2012 Southwest laid out three major revenue-generating initiatives it plans to execute during 2013 that will contribute roughly USD300 million to the USD1.1 billion increase in revenues the carrier is planning to deliver this year, which would result in total top-line revenues in 2013 of more than USD18 billion. Each of the three initiatives should produce USD100 million of incremental revenue during 2013. 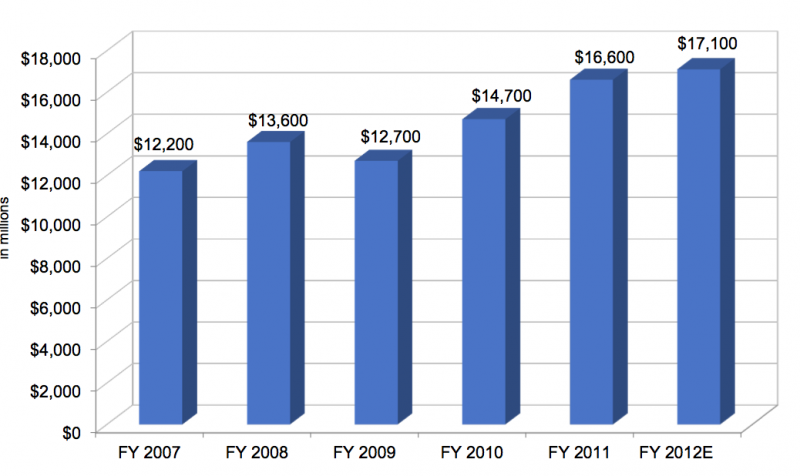 New sources of revenue for Southwest during 2012 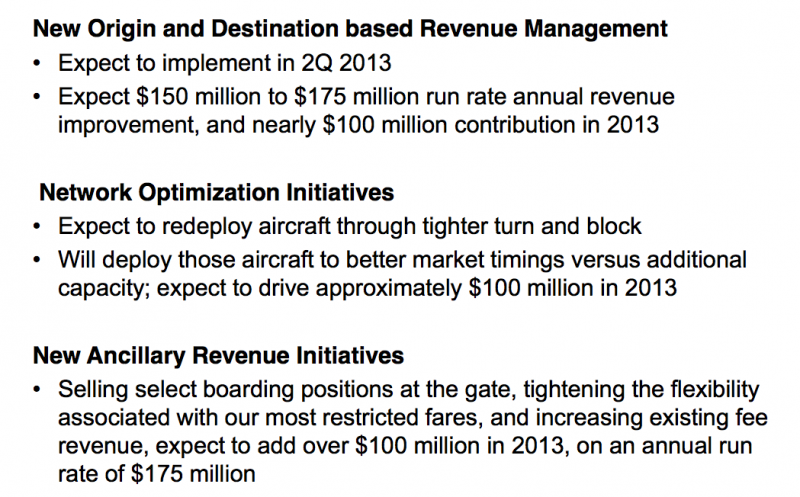 Southwest’s altering of the ways it manages revenue results from changing dynamics in the US domestic market. For decades the carrier’s network was built on a foundation of shorter routes. But Mr Kelly concluded, based on traffic and capacity trends during the last 12 years, that there are fewer passengers flying on longer trips, noting the number of short-haul passengers in the US domestic market fell from 38 million to 31 million (18%) between 2000 and 2011.

While Southwest during that time period recorded a 5 ppt rise in its share of US domestic short-haul passengers, “it is a shrinking pie, a very different air travel market today than in the year 2000”, Mr Kelly remarked. 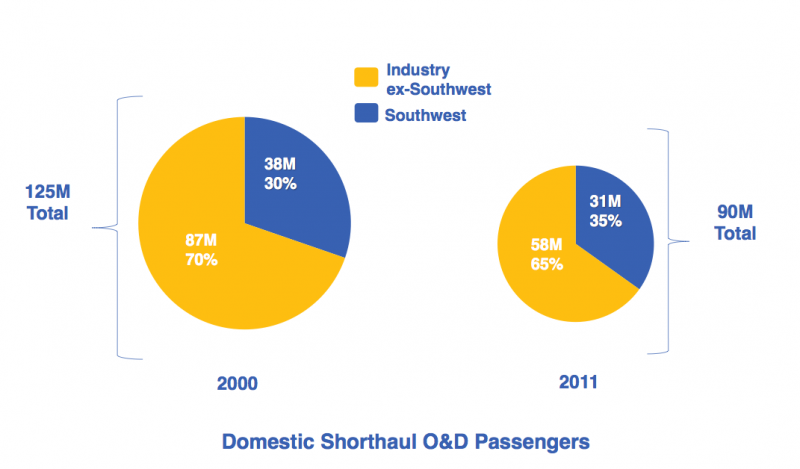 Another scheme Southwest is introducing during 2013 to bolster revenue is instituting changes in its scheduling to tighten its network efficiency to free up additional aircraft available at peak times during the day. Head of strategy and planning, Bob Jordan, acknowledged that “we spill demand in the heart of the day in particular...we know we have demand and we simply don’t have the aircraft to cover some of that demand”. The carrier plans to combat the demand spill by tightening turn times and block times to free up capacity to handle increased demand during peak hours.

The third new revenue initiative Southwest is introducing in 2013 is the broadening of ancillary fees through increasing checked bag fees at AirTran, raising the fees at Southwest for overweight bags, and the introduction of a “no show” fee on restricted tickets for passengers that do not cancel or show up for a flight. Mr Jordan said the new fee on restricted fares would both add ancillary revenue and “promote customer behavior that allows us to resell the open seat prior to departure”.

Southwest, which for years has touted its “Bags Fly Free” campaign that allows customers to check two bags without a charge, has recorded a contribution from AirTran’s first and second checked bag fees since it closed on its acquisition of its smaller low-cost rival in 2011. Southwest will continue to enjoy checked bag revenue from its AirTran subsidiary until the two carriers are fully merged in 2014 and the AirTran brand disappears. Southwest’s claim that it does not nickel and dime customers is not exactly foolproof since it has opted to retain AirTran’s baggage fees.

Until the two carriers are merged under a single brand, Southwest faces a challenge in managing potential customer confusion around fees for passengers travelling separately on AirTran and Southwest. The carriers are planning a phased-in roll-out of codesharing beginning in 1Q2013 with full connectivity available in early Apr-2013. Mr Kelly explained that if a passenger books a flight on Southwest and it features a segment operated by AirTran, the leg operated by AirTran will not be subject to bag fees. He did not specifically comment on how the fees would be applied to passengers booking their journeys with AirTran and travelling on a Southwest segment.

In 1Q2013 AirTran plans to introduce flights from Denver to Los Cabos, a route already populated with flights from United and Denver-based Frontier. According to schedules in Innovata, at the time AirTran launches flights it will account for roughly 34% of the seats in the market compared with a 43% share by Frontier and United’s 23% share. 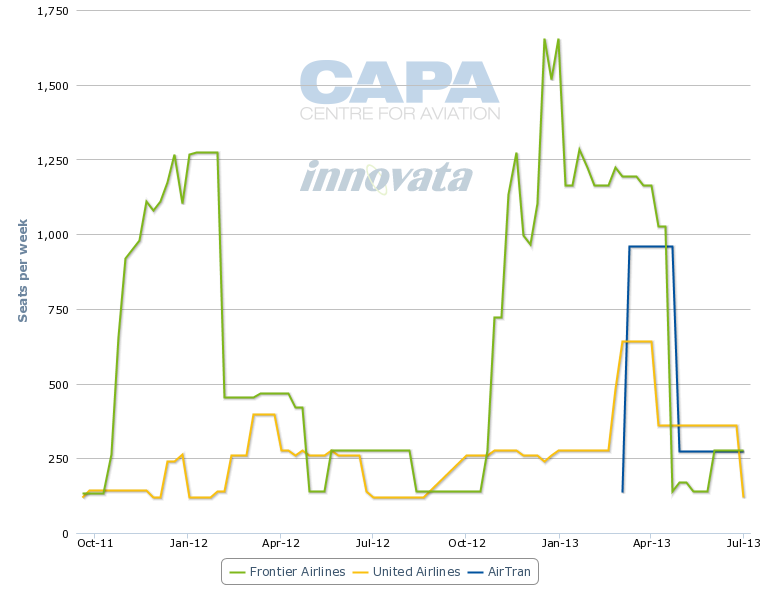 American, United and Frontier all operate flights from Chicago O’Hare to Montego Bay, with American representing roughly 80% of the seats on offer. Both Frontier and United also operate service from O’Hare to Punta Cana, with Frontier accounting for 79% of the seats available between the two destinations.

Mr Jordan stressed a significant amount of work has already been completed to transform AirTran’s network ahead of the implementation of full codeshare between Southwest and AirTran. He concluded that in overlapping markets capacity has been rationalised, which has resulted in a double-digit rise in unit revenues on those pairings year-over-year.

He also stressed that Southwest has recorded meaningful gains in AirTran’s local traffic, particularly in Atlanta. Over the past year Southwest has worked to de-hub AirTran’s operations in Atlanta, eliminating smaller markets like Flint, Michigan and Rochester, New York where flow passengers connected on AirTran in Atlanta. Southwest has redeployed some of AirTran’s capacity to the large Southwest markets of Midway, Houston Hobby and Orlando.

While Southwest seems pleased with the changes it has made in Atlanta, its main rival in the market, Delta, which has its headquarters and mammoth hub in Atlanta, has concluded that Southwest has had trouble filling seats on flights from Atlanta (both AirTran and Southwest currently operate from the airport under their own respective brands). In late 2012 Delta executives cited DOT data in its conclusions that Southwest’s loads were weaker in Atlanta, and noted Southwest has circulated some aggressive fare sales in the market place.

As Southwest phases out AirTran’s two-class product offering, Delta stands to gain some of AirTran’s corporate customers who will bristle over Southwest’s decision to eliminate AirTran’s business class offerings.

Southwest needs to re-open the cost gap with legacy rivals

After battling rising unit costs for most of 2012 – a 6% rise in 3Q2012 and a nearly 4% increase in 9M2012 – Southwest estimates a 1% increase in unit cost excluding fuel in 2013. The bulk of the cost improvement will occur during 2H2013 as cost pressures associated with a fleet reconfiguration ease during that time. Southwest has been retrofitting its 737-700s with six additional seats as part of an update to its interiors dubbed “Evolve”. Southwest has also previously stated a goal to reduce overheads by USD100 million in order to ease its unit cost pressure.

A major unknown for Southwest in sustaining a lower cost structure is widening the labour cost gap with its US legacy rivals that has narrowed during the last decade as all the country’s network carriers restructured under Chapter 11 bankruptcy protection and achieved lower labour costs through court-imposed contracts on employees.

Presently, salaries, wage and benefits comprise about 29% of Southwest’s cost structure. By May-2013 the airline will be in labour negotiations with the five largest unions whose members represent 99% of the carrier’s workforce.

“The facts in front of us are that we’ve got some labor cost challenges that we need to figure out how to overcome,” carrier chief operating officer Michael Van de Ven told investors. He explained that negotiating teams from both the airline and unions are aware of the challenge. But even as union negotiators understand the importance of keeping labour rates competitive, there is no guarantee the wider membership will agree to lower wage rates without some give back by management. The negotiations will continue for quite some time, which means Southwest will still have to battle rising labour costs until new agreements are reached with pilots, flight attendants, ramp workers, mechanics and customer service agents.

Southwest faces a formidable challenge in meeting its stated ROIC goal of 15% for 2013 after missing that target in 2012. It is a bold mission considering the carrier is still in the midst of the AirTran integration and all the complexities associated with combining two carriers that offer very different product propositions to their customers.

While Southwest management has been careful to state there is no certainty in meeting its ROIC goals, if the carrier misses the 15% mark by a wide margin investors will likely view any future stated goals by the carrier as hollow and grow impatient with unmet expectations.

Southwest's path to achieving a 15% ROIC 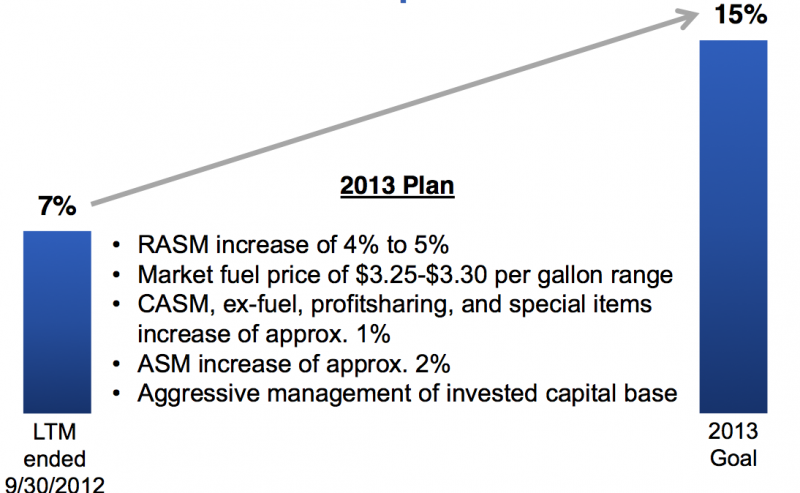