Air Canada’s achievement of profitability during 2012 was dampened by a 1Q2013 loss driven by a weak yield environment in some of its most competitive markets as premium travel softened. While the carrier concludes booking trends during 2Q2013 are on the upswing, yields are still under pressure as Air Canada continues work on its cost base to withstand pricing actions by its competitors.

A key tenet of the carrier’s strategy going forward is leveraging its international network through a widebody fleet upgrade encompassing Boeing 777s and 787s as it works to shed six older Airbus A340 aircraft during 2013. But in order to execute strengthening its international offerings Air Canada needs to ensure it has enough domestic and transborder feed to support long-haul service, which means it needs to ensure its domestic product remains competitive with WestJet and Porter, which have ambitious expansion plans for the Canadian domestic market.

A recent agreement between Air Canada and the Canadian Government to extend the current pension funding structure until YE2020 was significant in that it helps the carrier stave off increasing funding requirements, but the deal comes with stipulations that essentially prohibit any rewards to shareholders.

Air Canada’s yields during 1Q2013 fell 1% driven largely by continued competitive pressure in the airline’s crossborder markets and the Eastern Triangle (Toronto-Montreal-Ottawa), regions where Air Canada has faced competitive capacity additions and pricing actions throughout most of the last couple of years. Other elements dragging down yields included a higher leisure traveller mix resulting from the shift of Easter from Apr-2012 to Mar-2013 year-over-year, weather cancellations and a softening of higher yielding close-in bookings.

Overall revenue in transborder markets fell by CAD15 million (USD15 million) as yields on those routes dropped by 5.5% on flat capacity growth. The marked yield decline resulted from increases in competitive capacity and what Air Canada deemed “aggressive” pricing on transborder short-haul routes including Boston, New York and Washington, DC. During the last two years WestJet has made its entry into the New York market with service between Toronto and JFK while Porter Airlines has launched service from Toronto Billy Bishop airport to Washington Dulles and expanded frequencies between Toronto and Boston.

Air Canada remains the leader in the Toronto-New York market, with a seat share of (5-May-2013 to 11-May-2013) of 42%, with WestJet holding a 19% share and Porter representing a 20% share. American’s share is approximately 17%. Air Canada and its Star partner United also account for the highest seat share in the Toronto-Washington market. Air Canada also has the advantage of serving Washington National, which is closer to the city centre than Dulles. National is just 6km from the District of Colombia while Dulles is approximately 48km. 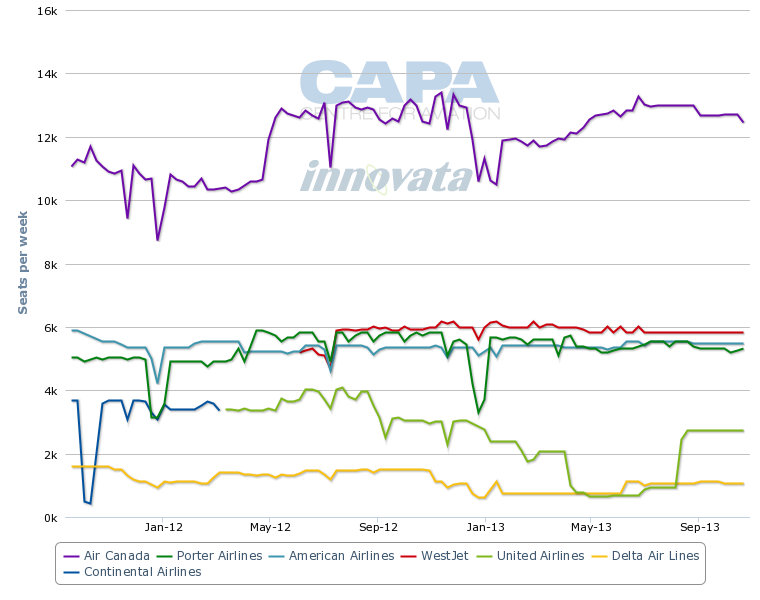 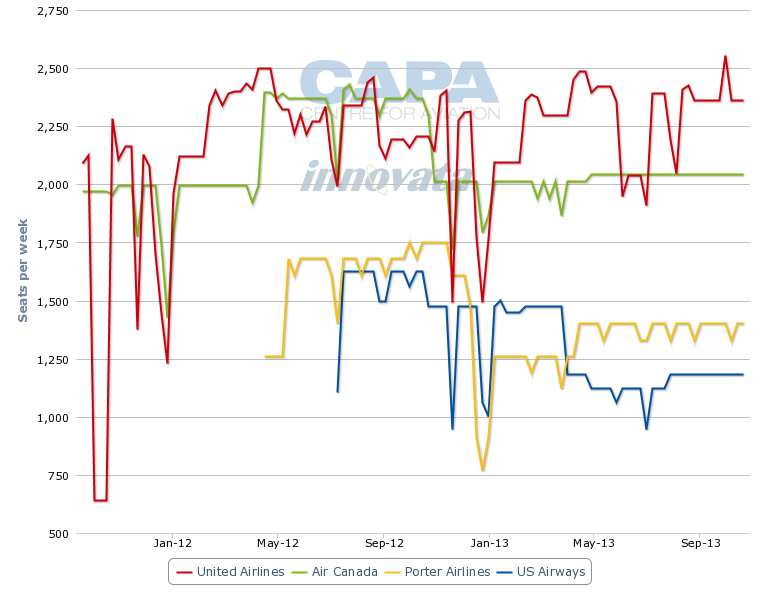 Air Canada has also felt consistent pressure in the business markets of Toronto-Montreal-Ottawa during the last couple of years following WestJet’s significant capacity increase in the region during May-2011 and some expansion by Porter between Toronto and Ottawa. During 1Q2013 Air Canada’s domestic yields fell 0.1% on 1.8% traffic growth, flat capacity and a load factor rise of 2ppt, which reflects the pricing challenges the carrier faced at the start of 2013.

During a recent discussion with analysts and investors Air Canada CEO Calin Rovinescu remarked that the carrier needed to tackle its costs in order to deal with “behaviour like this in the future”.

Other markets under pressure during 1Q2013 included Air Canada’s routes to the Caribbean, Mexico and South America. Yields fell 4.7% during a typically high-demand period for warm weather routes from Canada while traffic fell nearly 8%.

Air Canada’s performance was strong in the Pacific and trans-Atlantic as Pacific yields increased 4% on a similar rise in capacity and a 5.2% rise in traffic. The carrier’s load factors grew 1.2ppt. It enjoyed steady yield growth in the Pacific despite feeling pressure from Japan’s currency fluctuations, which reduced overall Pacific passenger unit revenue by CAD5 million (USD5 million) during 1Q2013. Carrier CFO Michael Rousseau cited strong performances in Air Canada’s service to China and Hong Kong as a main driver in the Pacific yield increase.

The airline’s capacity in its trans-Atlantic markets fell nearly 3% year-over-year during 1Q2013; however yields were basically flat even as traffic grew 2% and load factors increased 3.8ppt. Given Europe’s somewhat shaky economy and lower overall premium demand, Air Canada appeared to trade yields for loads during the quarter in the hopes that pricing traction will improve during the remainder of 2013. 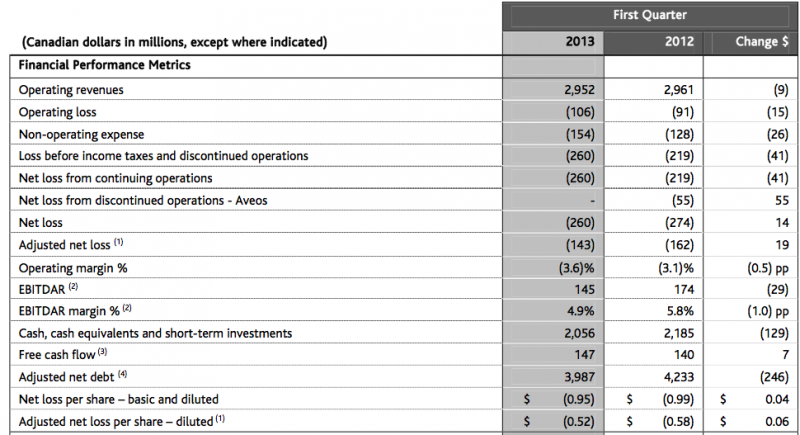 At the moment any signs of a reversal of fortunes during 2Q2013 are murky at best. In acknowledging that Air Canada’s 1Q2013 performance fell short of expectations, and that even though there are improvements in bookings in the premium and leisure sectors, Mr Rovinescu said, “the yield environment remains challenging”, but added that he does not believe soft yields would become a long-term obstacle.

Some of the current yield softness could be blunted by unit costs guidance of a decrease of 0.5% to a rise of 0.5% during 2Q2013 after those costs jumped 1.4% during 1Q2013. But along with improved cost performance driven somewhat by lower fuel prices, Air Canada will need to fine-tune its revenue management in order to maximise its still leading position in the Canadian market, where it accounts for 49% of the seats on offer in the domestic market and a 34% seat share on international routes. 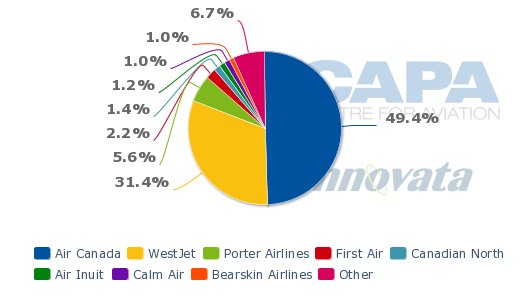 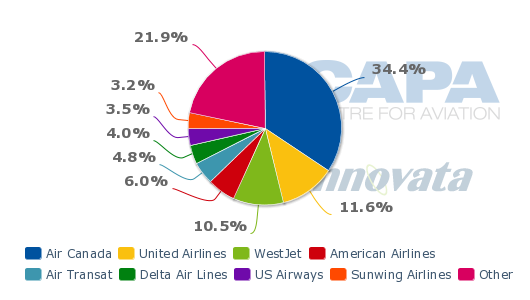 Even as he declared that Air Canada’s corporate clients are generally cautious on spend in the current macroeconomic environment, Mr Rovinescu stated the carrier is working with those businesses to table attractive products that work within certain restrictions including travelling in business class only on longer-haul routes. He highlighted the “tremendous uptake” in near-in upgrades to the business class section by passengers who don’t opt to purchase premium tickets in advance.

Mr Rovinescu constantly speaks of Air Canada’s transformation from a traditional legacy carrier built on the pillars of bolstering revenue, cutting costs, building its international network through connecting traffic at Toronto International airport and fostering positive changes to its culture.

Noting fleshing out its international network is a priority, he highlighted Air Canada’s investment in updating its widebody fleet. Once the first of five additional new 777-300ERs is delivered in Jun-2013 it will be deployed on Air Canada’s service from Montreal to Paris, a market Mr Rovinescu believes is ideal for the higher density 458-seat configuration of the new widebodies, which will also feature a new premium economy product. The carrier is deploying the aircraft in international markets featuring high volumes of leisure passengers.

Other enhancements Air Canada is planning to its international network in 2013 include new service from Toronto to Istanbul and Seoul, as well as expanded frequencies from Toronto and Beijing and bolstering existing service between Calgary and Tokyo.

Simply stated, Mr Rovinescu concluded that for a carrier like Air Canada with its legacy cost structure, leveraging its international brand would be key. With WestJet (through its new Bombardier Q400 subsidiary Encore) and now possibly Porter with the operation of Bombardier CSeries narrowbodies aiming to further entrench on Air Canada’s domestic and US transborder presence, it is working to solidify its last bastion of competitive strength – long-haul international markets. While some of WestJet and Porter’s passengers will inevitably connect to Air Canada’s international service, Air Canada needs to carefully craft a fool-proof competitive response to the latest encroachment to ensure it sustains and grows its own feed to power its expanded international network.

Pension relief granted by the government comes at a price

In Mar-2013 Air Canada reached a crucial agreement with the Canadian Government that extends pension funding relief it secured in 2009 to stave off another formal restructuring. That agreement froze pension payments for 21 months and then capped funding requirements between 2011 and 2013. If Air Canada was unsuccessful in extending the agreement it faced a CAD4 billion (USD4 billion) funding deficit when the current agreement expires, which likely would have driven the carrier into another formal restructuring just a few years after dodging the bankruptcy bullet.

But significant stipulations accompanied the government’s reprieve including a prohibition on dividends and share buy-backs and certain limits on executive compensation packages. While the carrier’s stock price enjoyed a bit of a lift after the agreement was announced, on 7-May-2013 its shares closed down 6% to CAD2.34 (USD2.34), according to The Globe and Mail.

Air Canada has much to prove in its ongoing transformation

Investors are likely spooked over the potential over not receiving any reward until 2021, which is understandable. While Air Canada during the last couple of years has made some progress in terms of turning a profit and cutting costs, it has come at a price with government imposed contracts on employees creating some resistance to management attempts to foster a positive culture.

As Air Canada’s competitors continue to pressure its domestic routes with the inevitable promotional fares and lower pricing points they enjoy due to their status as younger carriers, the transformation continually touted by Air Canada’s management requires a speedy completion to assure the competitor’s long-term value proposition. The competitive advantage it holds in international markets could be short-lived as its major rival WestJet has made rumblings about launching longer-haul international routes.