Underlying WestJet’s 5% rise in 2Q2013 profits was a 2% drop off in yields and a 4.6% decline in unit revenues, which continued a trend of contraction of those metrics for 1H2013 as yields were essentially flat and unit revenues fell 1%.

WestJet’s weaker performance in yields and unit revenues is triggering questions regarding its capacity expansion in 3Q2013 and its planned growth of 7.5% to 8.5% for the remainder of the year.

The carrier’s management remains unapologetic for its projected 4% to 6% increase in supply for 2014, and believes its 11%-12% rise in capacity for 3Q2013 is being easily absorbed in the market.

WestJet’s 9.7% capacity growth during 2Q2013 outpaced its 6.4% increase in traffic, resulting in a 2.2ppt fall in loads to 79.4%. In its formal discussion of 2Q2013 performance WestJet management explained the decline in both yields and unit revenues “were primarily driven by the dilutive impact of the additional seat capacity in our network”.

But during a 2Q2013 earnings discussion with analysts WestJet CEO Gregg Saretsky explained that “there is not necessarily a correlation between capacity expansion and revenue contraction”, explaining that WestJet’s international operations grew 25% during the quarter, and the carrier recorded a positive performance in those markets even with compounded growth.

He did acknowledge WestJet has seen “a little bit of a slowdown” domestically as intra-Canada capacity increased 6% during 2Q2013 while the carrier’s unit revenue performance in those markets was negative.

Explaining the competitive dynamics in the domestic market place during 2Q2013, carrier CFO Vito Culmone also remarked that WestJet “had a competitor who has been fairly aggressive with respect to putting more capacity in the market and more aggressive in general for parts of the fare structure”. WestJet was affected flooding around Calgary and Air Canada's push into Calgary and Edmonton with Bombardier Q400s beginning in Feb-2013 with Q400 turboprops. Mr Culmone stated the increased competitive capacity was dampening WestJet’s revenues at the end of 2Q2013 “and that’s also translated into 3Q”.

Defending WestJet’s capacity expansion during 2Q2013, which is typically the carrier’s weakest quarter, Mr Saretsky stated that a significant portion of the capacity was low-cost, red-eye and seasonal flying. “We’ve been more focuses on what’s happening with margins generally than what’s happening with capacity and how good or how light the load factors are,” he remarked.

WestJet points to overall profitability despite 1H2013 capacity growth of 7.6%

He also stressed that the capacity WestJet introduced was low cost, and when lower cost supply is introduced by a “carrier whose business model is focused on having low cost the result is positive, and that is why, not withstanding all of this in 2Q, we had record profits”.

WestJet’s unit costs excluding fuel and profit sharing notched down 0.7% during 2Q2013 and 0.3% for 6M2013. The decline in unit costs during 2Q2013 was mainly due to decreases in airport costs, maintenance and depreciation and amortisation expenses. Its unit costs for both 3Q2013 and the full year are expected to decrease 0.5% to 1%, which is an improvement over previous guidance of flat to a 1% rise in unit cost for 2013.

WestJet does not see a rebound in unit revenues during 3Q2013

With one month of 3Q2013 complete, WestJet does not project an improvement in unit revenues during the quarter as Mr Culmone stated he anticipates the carrier’s performance in that metric will fall in the same percentage range as 2Q2013. He attributed the decline to increased capacity, fleet reconfigurations of its Boeing 737-800s with premium economy and the continued ramp-up of its new regional subsidiary Encore.

The carrier has no plans to revise its 11%-12% system-wide capacity growth for 3Q2013 or its planned overall 4% to 6% increase for FY2014. Mr Culmone acknowledged that the double-digit growth in 3Q2013 might seem high, but he stressed roughly two-thirds of the increase is attributable to a rise in aircraft utilisation and increases in stage length and completion rates.

“We are working our assets harder and delivering the incremental ASMs at a lower incremental cost,” Mr Culmone explained. He stated the remaining one-third of the capacity growth is driven by fleet additions and the introduction of Encore, which will take delivery of a total of seven Bombardier Q400s during 2013. 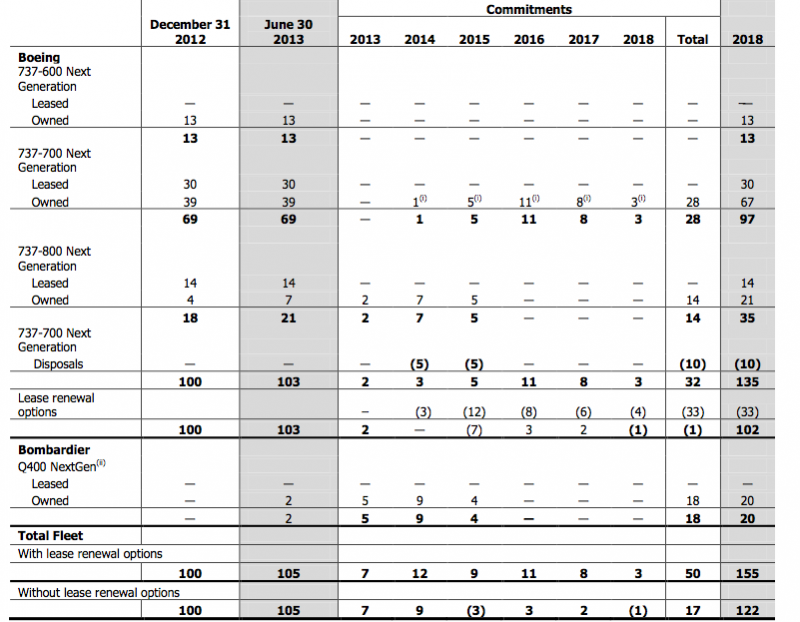 Company head of sales, marketing and guest experience Bob Cummings further rationalised WestJet’s 3Q2013 capacity growth, concluding that 3Q is typically a strong quarter for the carrier, and deploying extra capacity during that time is easier to absorb. At this point, he said WestJet was showing reasonably strong bookings for the quarter.

WestJet has no anxiety about its planned capacity growth for 2014

Presently WestJet has no plans to alter its projections of 4% to 6% capacity growth during 3Q2013, but the carrier is in talks with lessors to return Boeing 737s that were operated under a charter contract with Thomas Cook that has now ended. If the carrier succeeds in reaching favourable terms with those lessors, its capacity growth could be refined.

But Mr Saretsky feels extremely comfortable with WestJet’s growth plans as he explained that the carrier has recorded robust traffic increases in its codeshare and interline partnerships. He also stated that Encore will represent at least 2% of its planned growth during 2014.

He cited WestJet’s flexibility to shrink below its 4% to 6% supply growth in 2014 or spool up if the carrier does not opt to return the aircraft operated under the Thomas Cook contract.

“From where we sit today, and what we expect to see in terms of positive GDP growth, I think a 4% to 6% range we are feeling comfortable with,” said Mr Saretsky.

Many airlines peg their capacity growth to projected GDP, which for Canada is an increase of 2.4% for 2014. So WestJet’s rise is roughly double projected GDP growth. While it is justified to question the carrier’s planned expansion of supply, WestJet continues to deliver consistent profitability and once again beat its 12% ROIC after recording a 14.4% return on invested capital for the 12M ending 30-Jun-2013. Given those results and its solid unit cost performance, it is hard to lob a lot of criticism of WestJet’s planned capacity growth. But a revisit of its targets may be necessary should demand wane in the second half of 2013.