Air Canada during late 2012 and early 2013 appears to be making some offensive moves in western Canada prior to the highly-anticipated launch of WestJet’s new regional carrier Encore. Ahead of Encore’s debut in 2H2013, Air Canada is bolstering frequencies in some markets and upgauging from 50-seat jets to 74-seat Bombardier Q400s prior to Encore’s debut with the same aircraft type.

The moves by Air Canada in some of its western domestic markets could also be geared towards placing some capacity outside the highly competitive eastern region of the country. Air Canada has continued to face competitive pressure in that area, particularly the “Eastern Triangle” of Toronto, Montreal and Ottawa, from rivals WestJet and Porter Airlines.

Beginning in Feb-2013 and continuing through May-2013 Air Canada is upgauging its aircraft in 10 markets. All of the aircraft changes are taking place in the WestJet strongholds of Calgary and Edmonton. Air Canada stated it is placing Q400s on those routes operated by its main regional partner Jazz, replacing 50-seat jets currently in operation. Presently, Jazz operates a fleet of 15 74-seat Q400 turboprops.

Based on current schedules in Innovata (12-Nov-2012 to 18-Nov-2012), WestJet commands a 51% share of seats deployed from its base and headquarters in Calgary and a 50% share in Edmonton. 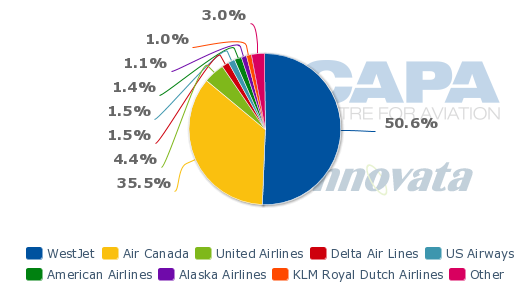 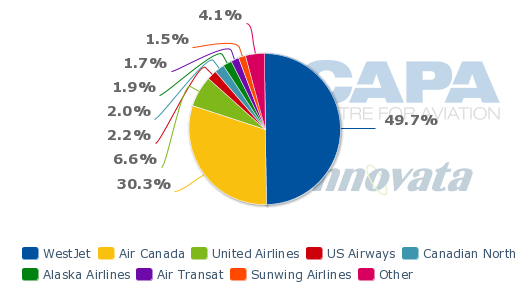 With the exception of the route from Calgary to the capital of the Northwest Territories Yellowknife, WestJet serves all the destinations as five of the markets – Edmonton, Saskatoon, Victoria, Regina and Fort McMurray are listed in the top 10 domestic destinations served by Calgary based on the number of seats deployed. 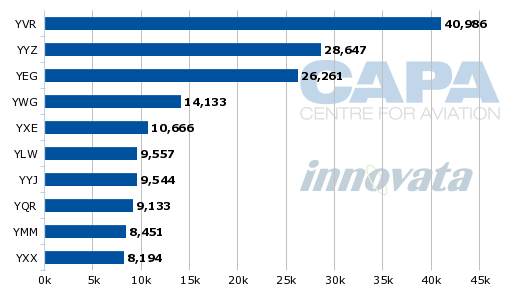 Presently WestJet operates an all-Boeing 737 fleet, and flies narrowbodies to all those markets. But the carrier recently decided to base Encore in its headquarters of Calgary, and one element of WestJet’s three-pronged strategy with Encore is to place smaller-capacity aircraft on short-haul routes to better match aircraft to routes operated at a specific time of day in certain markets.

WestJet plans to unveil the initial Encore routes in Jan-2013, and take delivery of the first Q400 in Jun-2013. The carrier is accepting delivery of a total of seven turboprops in 2013.

See related article: WestJet sees no stumbling blocks as it continues to lay the foundation for its new regional carrier

With the introduction of a new second fleet type, WestJet could likely deploy some of the Q400s on existing routes where it wants to better match frequency and capacity with demand. Until it is comfortable that the Q400 will live up to its expectations, it is feasible that WestJet would deploy the first few aircraft on its most travelled routes from Calgary so it can quickly and easily address any operational issues that arise with the aircraft. Some of the short-haul markets served by both Air Canada and WestJet and where Air Canada is deploying Q400s are ideal testing grounds for WestJet’s new turboprops. Distances from Calgary to Fort McMurray, Regina, Saskatoon, Victoria and Edmonton are all under 500 miles, and Edmonton-Winnipeg and Edmonton-Yellowknife are less than 800 miles. It would be logical for WestJet to use those routes to trial its new turboprop aircraft.

Air Canada beginning late in 2012 and continuing through the beginning of 2013 is also increasing frequencies in markets from Calgary and Edmonton to western Canada, which will result in an additional 400 daily seats spread across eight markets. WestJet serves five of those markets, Calgary-Fort McMurray (a route being upgraded by Air Canada to the Q400), Calgary-Grand Prairie, Edmonton-Fort McMurray, Edmonton-Regina and Edmonton-Saskatoon.

The moves Air Canada is making in the country’s western region are being painted by the carrier as an effort to ensure it is properly serving the area’s business travellers. But the changes are also likely designed to offset the increasing competitive pressure Air Canada is enduring in its high-travelled eastern Canada business markets, especially between Toronto-Montreal and Ottawa. WestJet during the last year has increased its capacity in those markets to broaden its reach with business travellers. All-Q400 operator Porter Airlines also serves those markets from its base at Toronto City Centre Airport, and recently recorded a 7.5% drop in its overall traffic on a year-over-year 5.5% rise in capacity during Oct-2012.

Porter’s load factors fell 8.3ppt to 59% for the month, but company management stressed the change in loads were a result of the carrier’s focus on yields. But like Air Canada, Porter is also probably feeling competitive pressure on its Eastern Triangle routes, which means it is tough for the carrier to achieve pricing traction.

Recently Air Canada CFO Michael Rousseau told analysts that regional routes within the Canadian province of Ontario continue to be affected by capacity increases and “aggressive fare competition”, which means all the major carriers serving those markets – Air Canada, Porter and WestJet – are likely seeing weak yields within the Eastern Triangle.

Air Canada’s changes to its network in western Canada are the first moves in a new chapter of competition with its long-term domestic rival WestJet. Previously, WestJet has stated there are numerous market opportunities for Encore, particularly on smaller routes where Air Canada through its regional operations has a monopoly status.

In the short term the result of the heightened competition will be a boon to consumers as the two carriers initially will engage in a fare contest as Air Canada will move to match WestJet’s introductory fares as a means to ensure it does not lose customers to WestJet’s new carrier. Despite proclamations by WestJet that it can offer lower fares in those markets and still maintain strong yields, both Air Canada and WestJet run a high risk of diminishing returns on those route pairings as other regions within Canada remain under competitive pressure.