WestJet’s significant 33% growth in profits year-over-year during 1Q2013 is being overshadowed by the airline’s planned 9% to 10% capacity growth during 2Q2103 amidst a softer yield environment that shows no immediate signs of retrenchment. The carrier is repeatedly stressing that its decision to expand capacity is sound, highlighting passenger spill it experienced during 2012 when it achieved record load factors of nearly 83%.

While the bulk of WestJet’s planned 6%-7% domestic capacity expansion during 2Q2013 will be dedicated to transcontinental routes, the carrier’s launch of its new regional carrier Encore is occurring as demand patterns are somewhat unpredictable given a slight uptick in the Canadian unemployment rate in Mar-2013 and more profitable close-in bookings showing some signs of weakness. 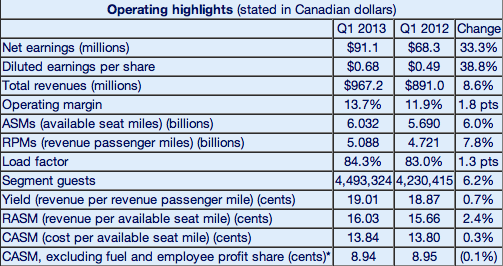 During a recent earnings discussion WestJet CEO Gregg Saretsky remarked that heading into 2Q2013 the carrier was experiencing the same “soft patch” that other North American airlines have seen during Apr-2013. The movement of the Easter holiday from Apr-2013 to Mar-2013 is a driver of the weaker yields in addition to Thomas Cook cancelling some capacity it had purchased from WestJet. During 2Q2012 WestJet also benefitted from close-in bookings triggered by frustrated passengers jumping from Air Canada after work stoppages by its unions caused significant operational disruptions.

Offering WestJet’s assessment of the current yield environment WestJet EVP sales, marketing and guest experience Bob Cummings noted that yields are not trending down significantly during 2Q2013, but as WestJet deploys more capacity year-over-year coupled with some softness in close-in bookings, “we’ve got yield backing off a little bit.”

WestJet’s planned system capacity expansion of up to 10% during 2Q2013 has left some observers wondering if the carrier is acting too ambitious with its ASM growth given the uncertainty as to when yields may recover. The carrier is recording stronger bookings in May-2013 and Jun-2013, but is warning that it will likely record a decline in unit revenues during 2Q2013, which could be an indication of weak pricing in the market place.

Mr Saretsky defended WestJet’s plan to press ahead with its expansion, remarking that in 2012 the airline “ran its operation too full” and ended up spilling traffic that it could have carried if there was more capacity available. The carrier’s executives remarked that with the benefit of hindsight, it would have added more capacity last year. WestJet’s traffic grew 8% in 2012 on 4% traffic growth, which resulted in loads growing 3ppt to about 83%.

During 2Q2012 WestJet’s system capacity grew 3%, which means the carrier is more than doubling its supply growth year-over-year during 2Q2013, something unheard of for North American carriers during the last five years.

WestJet’s planned capacity increase is also markedly higher than the 2%-3% supply growth planned by Air Canada during 2Q2013. But much of Air Canada’s focus during 2013 is targeted towards international expansion as leveraging its international network remains a key tenet of the carrier’s oft-cited transformation from an inefficient legacy airline.

While Air Canada is not adding a significant amount of capacity into the Canadian domestic market during 2013 – 0.5% to 1.5% – it could still feel reverberations from WestJet’s expansion as the added competitive capacity on its routes will dilute pricing, further pressuring its already falling yields.

WestJet believes it has the financial muscle to support its growth

Mr Cummings noted a large portion of WestJet’s’ planned 6%-7% domestic capacity increase during 2Q2013 would be dedicated to Canadian transcontinental markets. He reiterated that WestJet is “quite comfortable” with the planned expansion of its supply.

WestJet’s fellow hybrid carrier JetBlue has faced similar scrutiny of its capacity plans during the last couple of years as US legacy carriers continued to slash their supply. But JetBlue has argued that at roughly 13 years of age, it is still a growth company accounting for only 5% of the US domestic market. JetBlue’s capacity expansion has so far not hampered its profitability – during 2012 it grew net profit by 49% to USD128 million on a 7.6% rise in capacity.

While the dynamics of the Canadian market place are different with just two carriers representing the majority of capacity, at 17 years of age WestJet is still a relatively young company, and its estimated YE2013 fleet of 102 aircraft is smaller than the 160 aircraft JetBlue plans to operate by year-end. WestJet’s long term growth is not limited to the Canadian market as numerous transborder opportunities exist to expand its US transborder network and routes into Latin America and the Caribbean.

WestJet also believes it retains the financial muscle to support its targeted growth as its CAD1.4 billion in cash as of 31-Mar-2013 represented 39% of its last 12 month trailing revenues (versus 17% for rival Air Canada). Its 1:3 debt-to-equity ratio has also remained near that level for the last three years.

Driving down costs as capacity expands

As eyebrows continue to be raised over WestJet’s capacity plans, the carrier is pressing forward with a three-year CAD100 million cost improvement scheme it unveiled in Feb-2013.

The addition of higher density aircraft should help WestJet manage its unit costs through the addition of incremental capacity without an increase in shells and lower its average fleet age through the disposition of older aircraft.

With respect to employee efficiency WestJet has won an exemption from the Canadian Government to raise the flight attendant/passenger ratio from 1:40 to 1:50. Management has estimated CAD30 million in savings from the shift, but noted it could not give a definitive timeframe of when it would achieve that benefit.

WestJet believes its high-risk projects will be worth the gamble

In some ways 2013 is a pivotal year for WestJet as it launches its new subsidiary that is operating a new fleet type, introduces premium economy and fare bundles and works to reduce costs. None of those projects come without risks, and the carrier is taking a gamble on its capacity expansion by basing it on last year’s trends, which in the aviation business can seem like light years.

But the carrier has delivered consistent profitability for 32 quarters, which included times that were far more dicey than the current pattern of yield softness. While the carrier was taking far fewer risks during that time, WestJet’s management team remains bullish its big gambles will pay off. 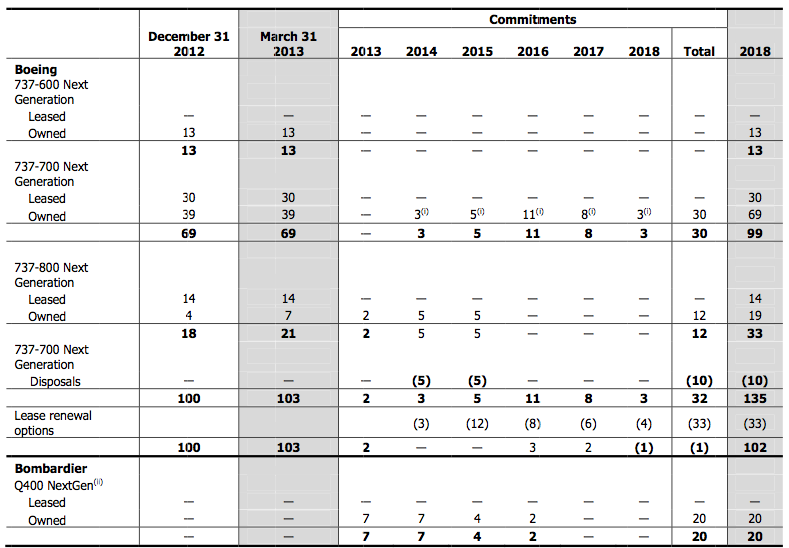