JetBlue enjoys a cost "sweet spot" in the consolidating US market

JetBlue Airways is building on a unique position it holds between bare-bones discounters and US network carriers to sustain its profitability. Its hybrid product remains attractive to customers with a distaste for the ultra low-cost business model adopted by Spirit Airlines and the higher fares charged by US legacy airlines. The US market is moving into seemingly its final stages of maturity with three network airlines – American (once it merges with US Airways), Delta and United – and one large low-cost carrier – Southwest – dominating the landscape.

JetBlue meanwhile believes its growth plan built on expansion from Boston and the build-up of its Caribbean network will allow the carrier to forge an independent and profitable operation somewhat buffered from the waves of consolidation sweeping the country.

The airline may still have to convince some sceptics that it can turn a profit on its planned 2013 capacity growth of 5.5% to 7.5%, but JetBlue grew its 2012 net profit nearly 49% year-over-year to USD128 million on a 7.6% rise in available seat miles. Between 2009 and 2012 the carrier’s profits jumped 120%, which is a solid performance from a comparatively young carrier versus its US industry peers.

JetBlue’s network growth platform is squarely rooted in primarily business market growth from Boston and expansion into leisure and visiting friends and relatives (VFR) markets into upper Latin America and the Caribbean. Those two regions have served as the backbone of JetBlue’s growth during the last few years, at a time when it has been consistently profitable. Boston and the Caribbean join JetBlue’s well-established markets from the US northeast to Florida and its transcontinental flights to the western US (see background information).

Those markets are largely shielded from legacy and low-cost competition as legacy carriers have given up attempting to establish hub operations at Boston, and American has drastically reduced its presence at JetBlue’s largest international focus city in San Juan.

Presently, JetBlue accounts for roughly 30% of the seats on offer in Boston and 31% in San Juan. The carrier marks a milestone in Nov-2013 when it launches new flights from Chicago O’Hare to San Juan, which is the first destination it will offer from San Juan outside the US northeast. Overall, JetBlue’s capacity during 2013 from Boston is expected to grow 15% and increase 10% into Latin America and the Caribbean. 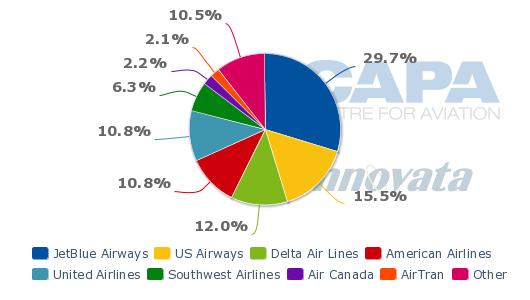 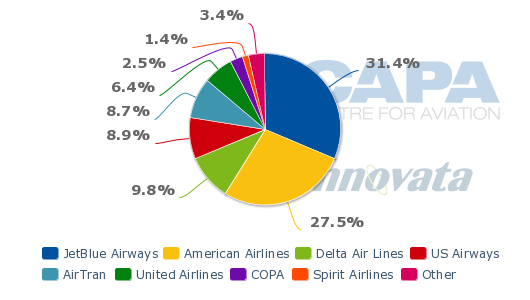 Airline executives estimate that it takes on average about two years for business markets to mature, while a VFR market in the Caribbean could take as little as six months to reach maturity. JetBlue offers a mix of business and leisure markets from Boston, but recently has been bolstering business markets from its focus city. In addition to numerous leisure markets JetBlue also serves major business destinations including JFK and Newark, Baltimore and Washington National, Chicago O’Hare, Charlotte, Denver, Seattle, Dallas, Richmond and Raleigh-Durham. Its new service from Boston to Philadelphia begins in May-2013.

JetBlue aims to leverage the differing timespans of market maturity as carrier CEO Dave Barger recently explained the carrier is “using some of the markets down south [in the Caribbean] to help fund some of the new markets that we’re opening up North”.

Mr Barger explained JetBlue’s targeted growth in two primary regions results in the majority of its capacity allocation resting in mature markets. The carrier estimates during 1Q2013 that markets three years of age or older will account for 86% of its capacity while new markets will represent just 5% of its available seat miles. Even as Boston and the Caribbean and Latin America will drive JetBlue’s growth during 1Q2013, many of its now mature markets lie within those regions, and the carrier so far seems to have validated its theory that the markets which take less time to mature can support the routes that take longer to ramp up.

JetBlue capacity allocation in new and mature markets: 2007 to 1Q2013 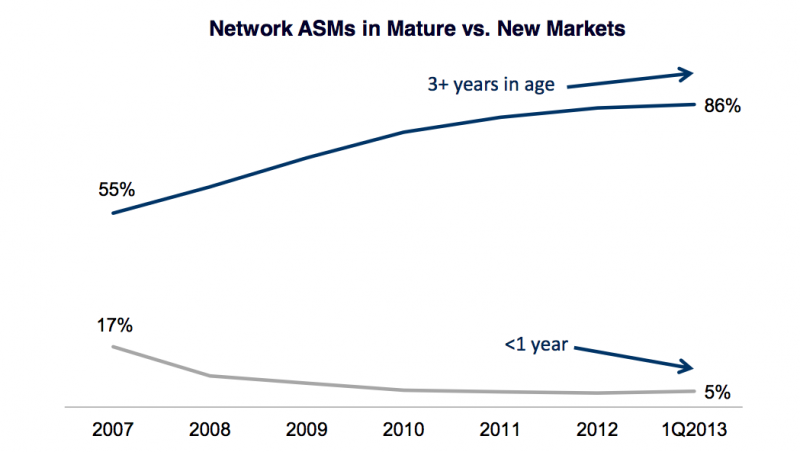 The hybrid is enjoying a cost structure sweet spot, one third below United's

Since its inception JetBlue has stressed its differentiated product that includes complimentary snacks and drinks and free live satellite television (along with some premium content for sale). While those elements remain intact, JetBlue has steadily built itself into a hybrid carrier by offering extended legroom for sale, and later bundling that product with priority boarding and expedited security screening for an upsell as part of its strategy to appeal to higher-yielding corporate travellers while preserving its leisure customer base.

“It’s fair to say that we’re not the lowest cost model that’s out in the industry when you think about the super discounters,” Mr Barger says. “And we’re certainly not the network carrier cost model either.” He explained JetBlue has hit somewhat of a “sweet spot” in terms of its cost structure. During 4Q2012 JetBlue calculates that based on stage lengths of roughly 1,000 miles its unit costs were just above Southwest and Spirit Airlines and about USD4.72 cents below United’s stage length-adjusted cost per available seat mile of USD12.30 cents. 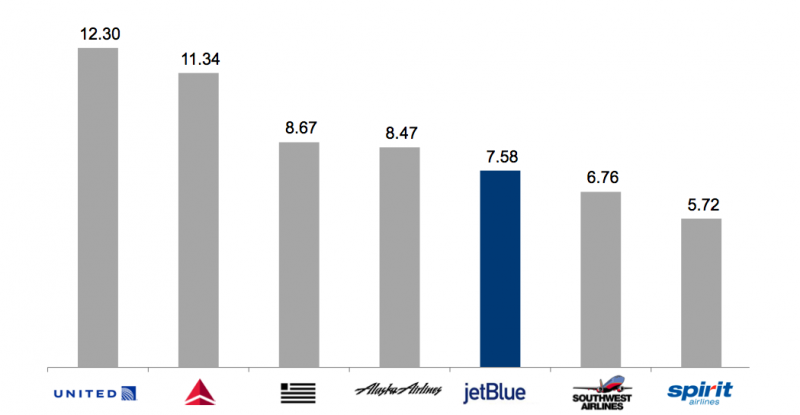 JetBlue’s middle-of-the-road product offering not only appeals to some corporate travellers that may not be able to justify paying full business fares on other carriers, but also to customers that are willing to pay a notch above bare-bones fares offered by Spirit Airlines for a few amenities. JetBlue has made a marked push into markets Spirit serves in upper Latin America from Fort Lauderdale, betting it can net some customers that prefer medium frills for ticket prices that fall in the mid-point of legacy and ultra low-cost carrier fares.

It appears JetBlue will continue to put competitive pressure on Spirit from Fort Lauderdale, which still remains Spirit’s headquarters and largest base of operations even though the carrier has focussed on US domestic markets from other bases during the last couple of years. JetBlue chief commercial officer Robin Hayes recently stated that the South Florida-Latin America/Caribbean market offers rich opportunity given the quick ramp of those markets.

JetBlue’s consistent profitability from 2009 to 2012 coincided with the paring down of its net debt by USD450 million between 2008 and 2012. Mr Barger notes the carrier achieved its debt reduction while growing its fleet by 35%.

The carrier recently started embracing the return on invested capital metric (ROIC), and generated a 4.8% return during 2012, which was lower than Spirit’s 26% ROIC, the 13% recorded by Alaska Airlines (a leader in the metric) and Delta’s leading 11% return among the legacy carriers.

At 13 years of age, JetBlue is the youngest carrier among the US airlines, and still accounts for only roughly 5% of the country’s domestic market. While Alaska and JetBlue are somewhat similar in size with respect to the number of aircraft each carrier operates (Alaska at roughly 172 and JetBlue with approximately 181), Alaska traces its history back to the 1930s and has had time to harvest its leading position in Seattle to forge domestic and international partnerships that allow the carrier to expand its passenger base while keeping its costs in check. Its younger counterpart JetBlue is using the same tactics from its largest headquarters and base JFK, which offers ample partnership opportunities for JetBlue. Between 2007 and the beginning of 2013 the carrier increased its airline partners (one way codeshares and interlines) from one to 23.

JetBlue arguably has all the pieces in place to close the ROIC gap with its peers, who are decades ahead in being traded as public companies. It is growing in markets with few competitive threats, realising the importance of keeping a tidy balance sheet and funding new market growth from reliable mature markets. While the strategy is not headline grabbing, it does appear solid as the carrier’s sound, but not stellar, financial results show.

As the rest of the US industry attempts to secure its place amidst the final round of consolidation, JetBlue remains on solid footing to forge an independent and profitable existence. 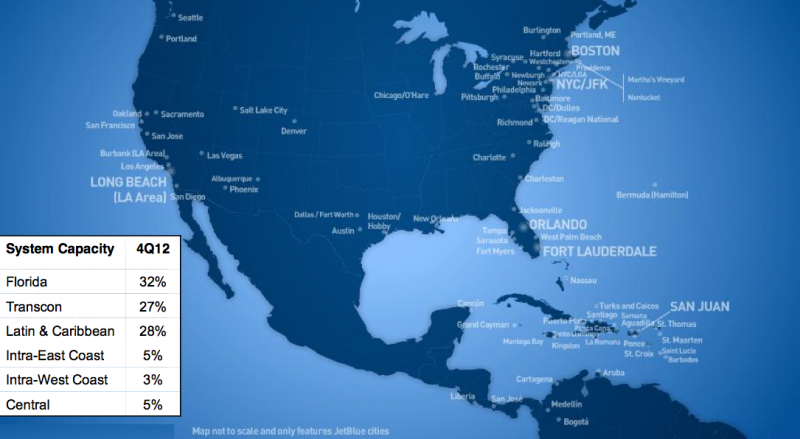