The majority of North American airline stocks fell on Thursday (23-Sep-2010) as the Dow (-0.7%) was down on a surprise rise in weekly jobless claims late in trading. The declines were despite news the US' Leading Economic Index increased 0.3% in Aug-2010 and existing home sales increased 7.6% to a seasonally adjusted annual rate of 4.13 million in Aug-2010.

Air Canada announced plans to make paying down its debt a priority over increasing its fleet. The carrier is due to take delivery of its first B787 in 2H2013. CFO Michael Rousseau stated Air Canada expects capital spending for 2010 and 2011 to be CAD150 million annually, not counting maintenance expenses that will be recorded under new international financial accounting rules. According to Mr Rousseau, Air Canada has “almost a billion dollars of debt coming due in the next two years and certainly we would like to pay some, if not all, of that back” and has financing commitments of CAD3.1 billion in place, covering 31 of 37 expected deliveries. He added the carrier is being “very, very disciplined” on adding capacity, as it needs to make money first.

Air Canada subsidiary, Jazz Air Income Fund (+0.9%) was among the few carriers to gain for the day. Competitor, WestJet (+0.3%) was also up, despite a 0.4% decline in Canada’s TSX. 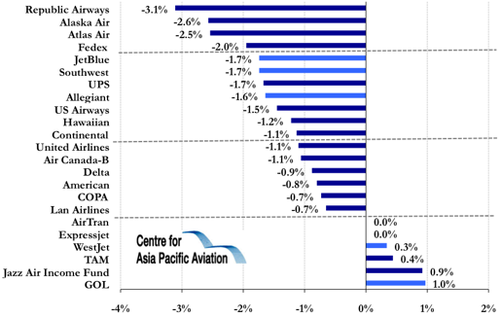