Air Canada is planning to issue a request for proposal (RFP) to regional operators for certain transborder routes, presumably operated by its long-time partner Jazz. The plans come at a time the carrier has declared an aggressive unit cost reduction of 15% and works to improve its transborder performance that has been plagued during the past couple of years by overcapacity and pricing pressure.

But the move by Canada’s largest carrier also reflects its continuing efforts to diversify its regional aircraft operating platform as a means to keep costs in check. For Jazz and other regional carriers, the move illustrates the now established and permanent trend of an ever-shrinking pool of North American regional carriers whose heyday from the late 1990s to the mid-2000s is now just a fading memory.

Air Canada’s formal announcement regarding the RFP occurred shortly after completing the transition of 15 mainline Embraer 175s to Sky Regional in early Sep-2013. The agreement with Sky Regional was made possible by a pilot agreement finalised between Air Canada management and pilots in 2012 after a government arbitrator ruled in favour of management’s final offer.

Air Canada’s decision to select Sky Regional instead of Jazz for the operation of the Embraer 175s follows the major carrier’s addition of Sky as a new partner in 2010 under a new agreement to operate 70-seat Bombardier Q400 turboprops out of Toronto Billy Bishop Centre Airport.

The recent moves by Air Canada parallel a continuing dispute it has had with Jazz parent Chorus Aviation over mark-up rates charged by Jazz on controllable costs covered under the capacity purchase agreement with Air Canada. Presently, that rate is roughly 12.5%. The issue is still in arbitration, and if a decision is rendered in Air Canada’s favour, Chorus could face a sizeable back payment to its partner.

In completing the transition of the Embraer jets to Sky Regional, Air Canada stressed that Sky’s cost structure “is more in keeping with that of the US regional carriers”, which is likely what Air Canada is ultimately looking for from Jazz. If Jazz cannot deliver a reasonable cost estimate for the RFP, history demonstrates Air Canada has no qualms about sourcing other airlines for regional feed.

In opting to disclose that it had issued an RFP, Air Canada did not specify which transborder routes it was interesting in receiving bids on, but its markets in the US northeastern corridor have been under pressure during the past couple of years as WestJet and Porter have heightened competition in some of those markets.

During the past couple of years WestJet launched flights from Toronto to New York LaGuardia while Porter has increased frequencies between Toronto Billy Bishop and Boston and added service to Washington Dulles from its City Centre base. Air Canada has also introduced service between Toronto and JFK, which has also contributed to increased capacity in the transborder space.

Air Canada’s transborder performance during 1H2013 featured a 1.6% drop in revenues while yields decreased 3.7%. Again, the carrier claimed increased industry capacity and aggressive pricing as the culprits on those same short-haul routes, but also on long-haul transborder routes from Vancouver and Calgary to Newark.

The pressure Air Canada continues to feel in transborder routes is pronounced given that 53% of its international seat capacity is deployed to the US. And the transborder flights Jazz operates for Air Canada are largely concentrated along the US east coast.

It is no wonder Air Canada is looking for reduced operating costs in those markets as competition remains intense. 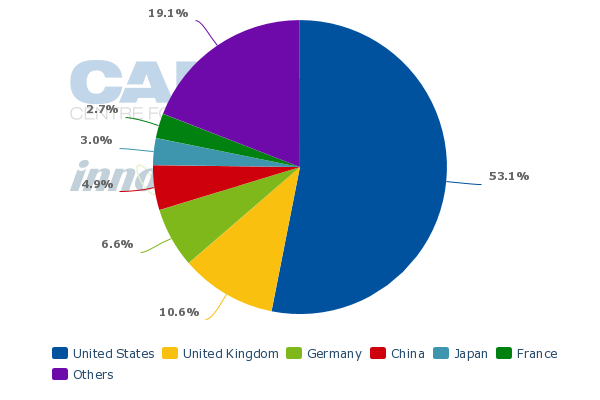 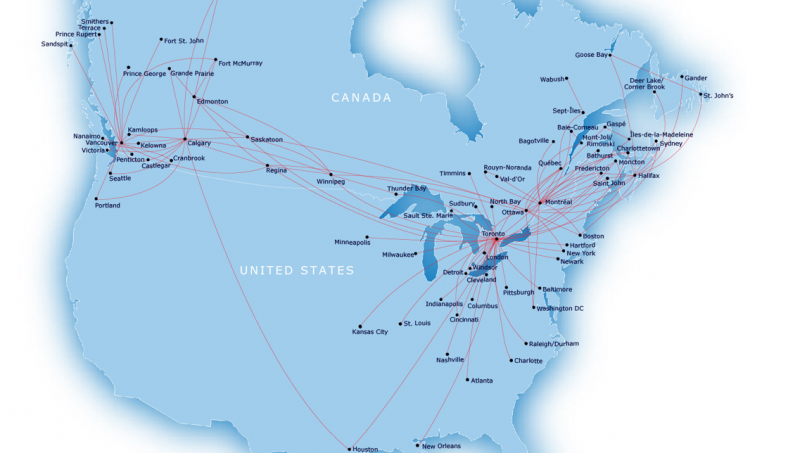 Based on current schedules in Innovata (29-Sep-2013 to 5-Oct-2013) Air Canada and Porter combined offer roughly 6,700 seats between the Toronto area and Boston. Dispersion of the seats is fairly equal with Air Canada representing a 55% share and Porter comprising the remaining 45%.

Interestingly, Innovata’s schedules show that most of Air Canada’s Boston-Toronto flights are operated with Embraer 175s, which are flown by Sky Regional. On routes to Boston where it is uncontested – Halifax, Montreal and Ottawa – Jazz aircraft are deployed. With a few months of Sky Regional’s operations under its belt, perhaps Air Canada believes it can garner lower cost on some of the flights to Boston outside of Toronto.

Air Canada is still the leading carrier between Toronto Pearson and the New York area (JFK, LaGuardia and Newark), holding a 44% share of the approximately 28,000 weekly one-way seats in the market.

In the nearly 16 months it has served Toronto-LaGuardia, WestJet has quickly gained a 21% share, which represents some of the pressure felt by Air Canada on transborder service to New York. Additionally, Porter operates roughly 5,530 one-way weekly seats between City Centre and New York. 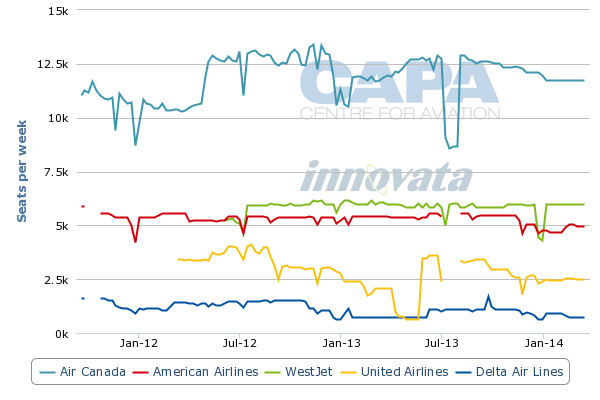 But similar to Boston, most of the Toronto-LaGuardia service is largely flown with two-class Embraer 175s. That is understandable given the higher level of business demand between those two cities. Service from Ottawa to LaGuardia is flown with Jazz CRJs, as are flights from Toronto to JFK, which could be a candidate for the lower-cost feed Air Canada is seeking.

Jazz operates Air Canada’s service from Ottawa and Montreal to Washington National with Bombardier CRJs while Embraer 175s are flown from Toronto to the airport serving the US Capital, according to Innovata. United operates regional jets between Ottawa and Washington Dulles, presumably at lower costs than the Jazz flights at National, given Air Canada’s comments that its regional feed needs to be more in line with US regional carriers.

Unsurprisingly, Air Canada is also the seat share leader from Montreal to the New York area, accounting for nearly 45% of the roughly 11,750 one-way seats deployed in the market. American represents 23% while Delta accounts for 18% and United rounds out the remaining 18%. 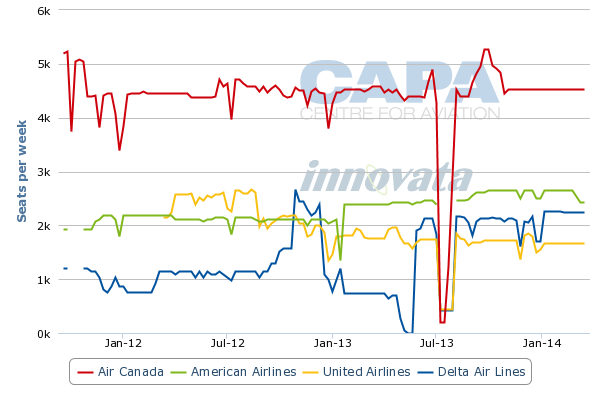 While it remains uncertain which US routes are presently at risk for Jazz, the reality is Air Canada needs to turn over every stone to meet its cost reduction target. The latest move is more subtle than its highly-touted launch of low-cost regional carrier rouge and the deployment of higher-density Boeing 777-300ERs on busier long-haul routes, but is nonetheless notable as any loyalty Air Canada may have to its long-time regional partner (and former subsidiary) is replaced by its quest to attain competitive costs in order to create a viable business that can withstand inevitable external threats.

In the bigger sphere Air Canada’s pursuit of lower-cost feed reflects the realities of the North American regional industry as consolidation creates fewer opportunities and the large carriers being formed can strong-arm lower rates from their regional partners.

Jazz’s own attempts at diversification through a stake in defunct Uruguayan carrier Pluna and short-lived operations for Thomas Cook illustrate the challenges North American regionals face in attempting to broach new business models. In the midst of uncertainty regarding the outcome in the rate dispute with Air Canada, Chorus halved its 1Q2013 dividend, a far from assuring sign for shareholders. With few options outside its business with Air Canada, the investment case for Chorus is diminishing.

Across the border Republic Airways Holdings’ sale of its independent brand Frontier to Indigo Partners also ends a four-year effort by that company to forge new business ventures.

Despite commendable efforts by Jazz, Republic and other regional airlines to diversify, the unpromising status quo for the regional industry remains intact – a shrinking pool of partners that are demanding lower costs. Only the carriers capable of delivering the cost base demanded by fewer network airlines will be the last ones standing.