Meanwhile, Lufthansa chairman Christoph Franz stressed that "2011 will not be a walk in the park" despite forecasting improved operating profits and revenues for 2011 and a “bright” economic outlook for the year. The carrier, which noted that it has again “created value” in 2010, cautioned that competition is intensifying on routes in Europe, Asia and the Americas and expressed concerns related to wage talks.

In addition, Lufthansa noted that the German air traffic tax “is an unpleasant blow”, a concern also raised by Air Berlin. A sharp rise in fuel costs could also hurt the carriers’ profits, even as the economic recovery is expected to boost the airlines’ revenues and operating profit.

Air Berlin, which did not provide a net income forecast for this year, aims to post a profit next year “at the latest”, the CEO said. The carrier reported a “disappointing” EUR97.2 million net loss in 2010, with Mr Hunold stating the carrier was “not satisfied with the profit developments” in the year. 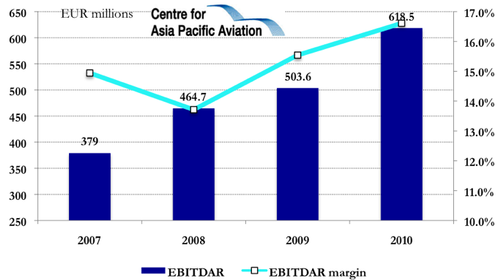 Earnings were negatively affected in 2010 by reduced yields, heavy snowfalls, ATC strikes and the volcanic ash cloud from Iceland that closed airports. The Dec-2010 snowstorms resulted in the cancellation of approximately 800 Air Berlin flights. The carrier also reported losses from the valuation of derivative financial instruments and lower foreign exchange gains as well as to the costs of buying back convertible bonds. 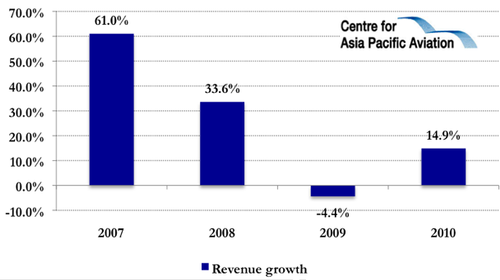 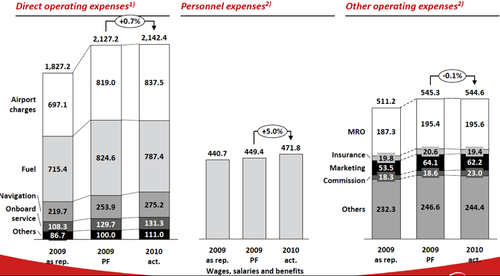 CEO Christoph Franz described the year 2010 as an eventful and challenging, yet ultimately successful. "We can be highly satisfied with this result; it shows that we have learned from the crises of the past," he said. "The company expects a further increase in revenue and the operating result, and as things currently stand, the conditions for a dividend payout should also be fulfilled for this year," the carrier stated. Lufthansa will pay a 2010 dividend of EUR0.60 cents/share.

During 2010, Lufthansa benefitted from a rebound in international passenger and freight traffic, the positive effects of cost cutting measures and from realising further synergy potential within the group. Lufthansa’s operating profit stood at EUR876 million in the full year, a 20.4% year-on-year increase, on revenues of EUR27.3 billion, a 22.6% year-on-year increase. 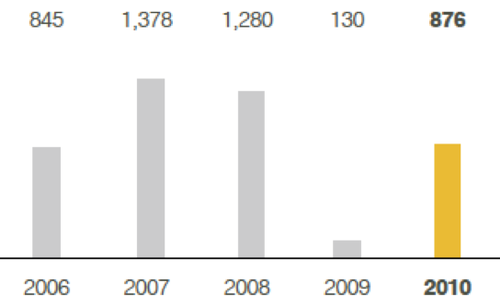 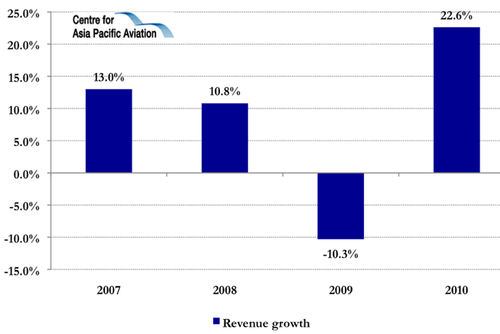 The carrier’s operating expenses increased 16.7% to EUR28.9 billion. The carrier has a target of marking sustainable savings of EUR1 billion by the end of 2011, with costs reduced by around EUR230 million in 2010.

Swiss International Air Lines tripled the 2009 result to record an operating profit of EUR298 million. The overall result of the Passenger Airline Group also included operating losses of EUR66 million from Austrian Airlines and EUR145 million from British Midland. Both airlines continue to consistently implement the introduced restructuring measures. Germanwings continued on its course of growth. However, the one-time special effects of the past year resulted in a negative operating result of EUR39 million.

In 2010, Air Berlin handled a record 33.6 million passengers, making the so-called hybrid carrier the second largest carrier in Germany and the sixth largest in Europe. The carrier stated that it witnessed strong growth in business passengers in 2010, particularly corporate customers. Load factors slipped 0.7 ppts to 76.8% in the year. RASK declined 2.6% to EUR 6.33 cents. (See appendix below for more traffic data information). 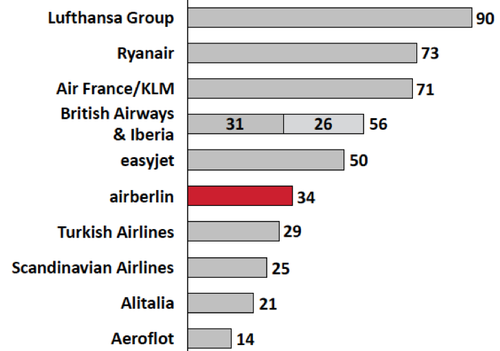 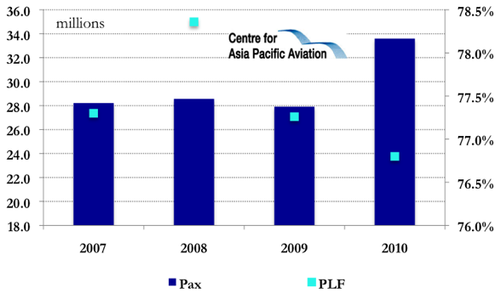 Air Berlin’s passenger numbers will grow by 4-5% in 2011, driven by international expansion, with increased frequencies to New York, San Francisco and Vancouver, the carrier said. Air Berlin had a “weak start” in the first quarter after tourists cancelled flights to Tunisia and Egypt because of the political unrest. Capacity to those countries will be reduced by 33% in the summer flight plan, Mr Hunold said. Domestically, the carrier expects the German aviation tax to increase pricing pressure.

Lufthansa also reported an increase in traffic in 2010, focussed around key growth markets, with growth of 17.9% year-on-year to 91.2 million passengers. The carrier added that it saw its “strong position on long-haul routes pay off” in 2010, due to increased demand and yields for first and business-class fares, particularly in Asia. The situation was weaker in Europe. 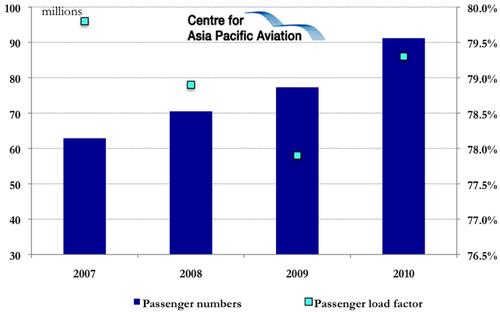 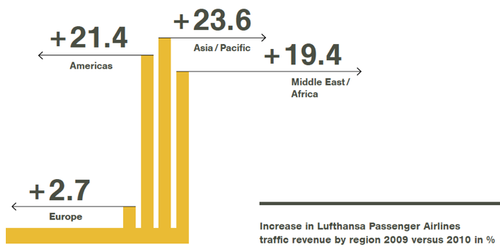 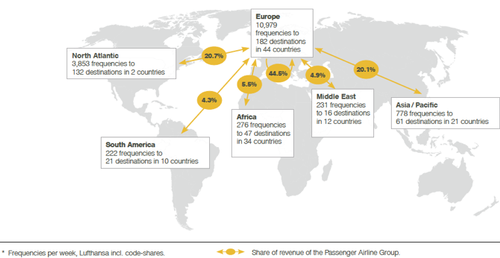 Lufthansa stated average yields on intercontinental routes are now “back at levels from before the financial crisis”.  However, the carrier noted “intense competition” from LCCs in European traffic. In the freight market, Lufthansa stated it has witnessed a “whirlwind” recovery in airfreight.  (See appendix for more information on Lufthansa traffic growth by region).

Air Berlin stated it aims to counter EUR180 million in higher fuel costs this year with higher surcharges and a EUR100 million savings plan. The carrier has hedged 84% of its jet fuel requirements for 2Q2010, 76% in 3Q2010 and 22% in the subsequent three-month period. 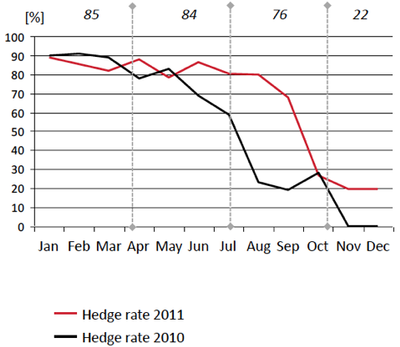 The carrier stated that an Air Berlin aircraft that used 4.4 litres of fuel per 100 passenger kilometres in 1994, used only 3.6 litres in 2010, marking the lowest consumption figures in the carrier’s history. 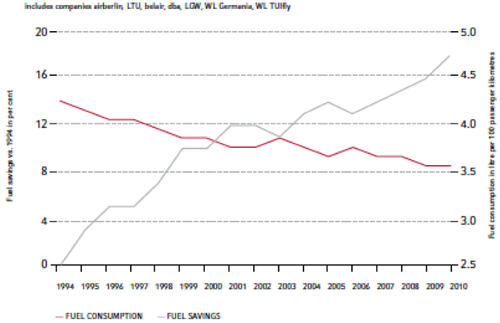 Lufthansa fuel consumption for 100km per passenger in litres 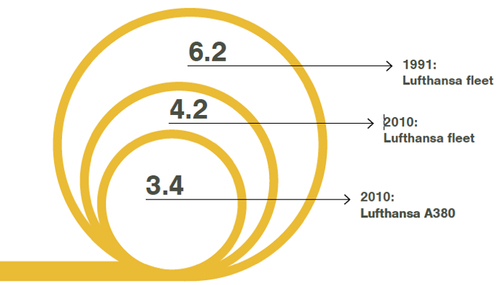 Lufthansa Group finance director Stephan Gemkow stated Lufthansa spent almost EUR5.2 billion on fuel in 2010, an annualised increase of 42% owing to higher prices, greater volumes and a rise in the value of the dollar.

He forecast a further 30% increase in 2011 to EUR6.8 billion, which would exceed the previous record of EUR5.4 billion in 2008. The carrier had previously anticipated EUR6.5 billion in fuel costs for 2011. Mr Gemkow said that Lufthansa would continue to hedge its fuel requirement, adding that the carrier's hedging transactions break even at an oil price of USD91/barrel. 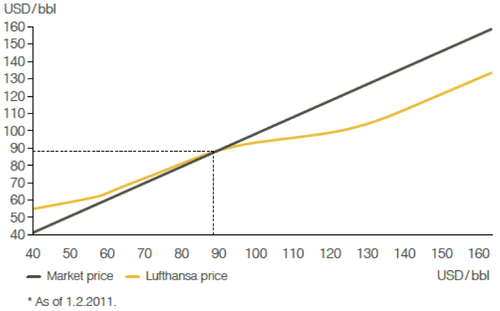 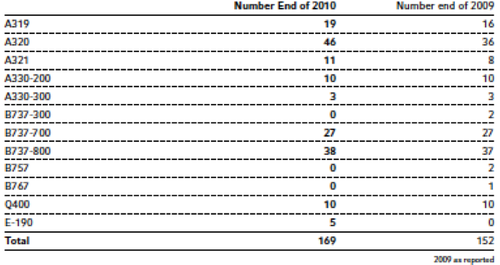 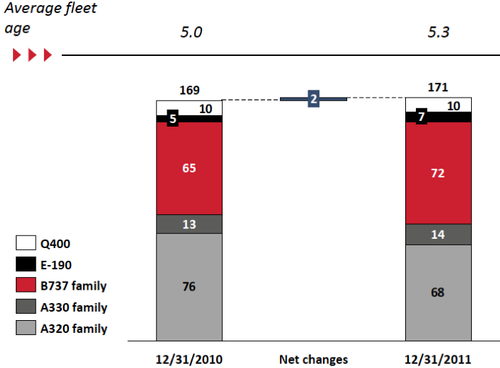 Air Berlin, this month, also agreed to sell new aircraft with total list prices of about USD1 billion in the latest in a string of deals to reduce its debts. The sale and lease back with GECAS covers 12 new aircraft – five A320s, three A321s and four B737-800s – for delivery in the first three quarters of 2012. "We highly value this transaction as it is significantly enhancing Air Berlin's financing portfolio by securing the aircraft financing needs until the third quarter of 2012," CFO Ulf Huettmeyer said.

Lufthansa Group’s fleet is significantly larger, with 710 aircraft as at 31-Dec-2010 and an average fleet age of 01.9 years. The carrier also has 155 aircraft on its order book, for delivery by 2015. The carrier ordered 56 new aircraft in 2010. Lufthansa stated it is scheduled to take delivery of four more A380s this year, including two in Mar-2011. The carrier this month also announce an order of 30 A320s and five B777Fs valued at EUR4 billion at list prices. 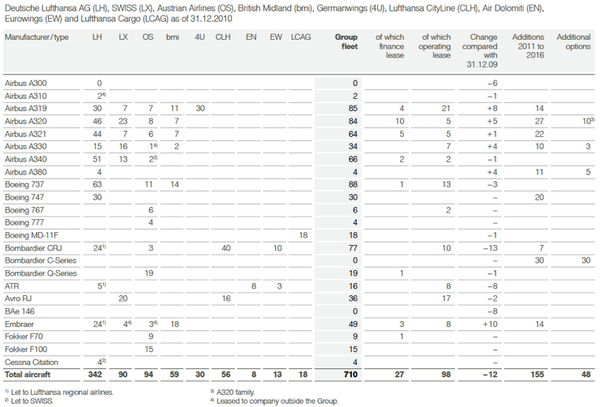 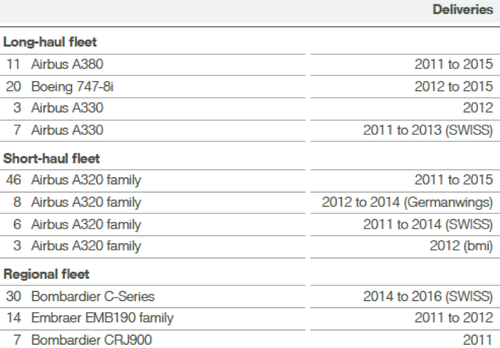 Air Berlin moving away from low cost routes; to join oneworld in Apr-2011

Air Berlin in 2010 increased its number of corporate agreements by 286 or 24.8% to 1441. The airline also signed nearly 6000 companies to a small-business programme for customers with at least three permanent employees, launched this time last year. 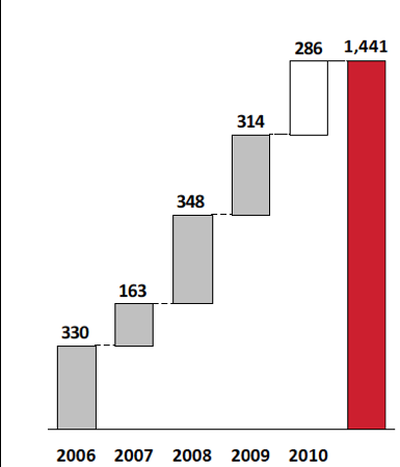 Air Berlin has systemically expanded its codeshare partnership in the past few years. As of late 2010, the carrier had codeshare agreements with Hainan Airlines, S7 Airlines, Pegasus Airlines, Bangkok Airways, American Airlines and Finnair. The carrier is making progress on negotiating codeshare agreement with the British Airways and Iberia units of International Consolidated Airlines Group SA as the company gears up to join the oneworld alliance in Apr-2012. Mr Hunold said he is not aware of any interest from IAG to combine with the German airline. Mr Hunold stated the carrier sees its entry into oneworld as being “one of the greatest strategic steps ever taken by Air Berlin”.

Also key to its international network expansion is the carrier’s decision to increase its stake in NIKI, opening attractive opportunities for the group in the Eastern European market from NIKI’s Vienna base. 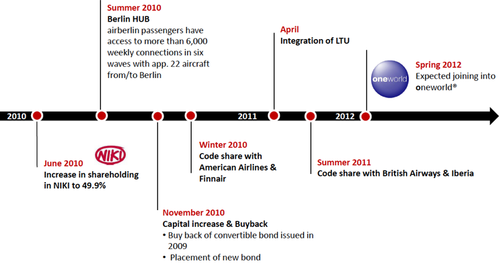 Air Berlin shares have dropped 14% in 2010, valuing the carrier at EUR271 million. As noted by the carrier itself, “the 2010 stock market was not a god year for airline stocks”, with the carrier’s shares ending the year 6.5% weaker at EUR3.71. Meanwhile, Lufthansa’s shares gained 39% in 2010 despite volatility in the market. 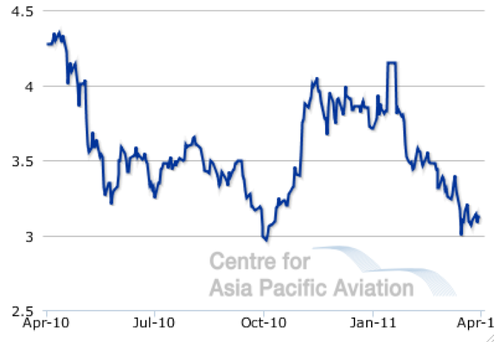 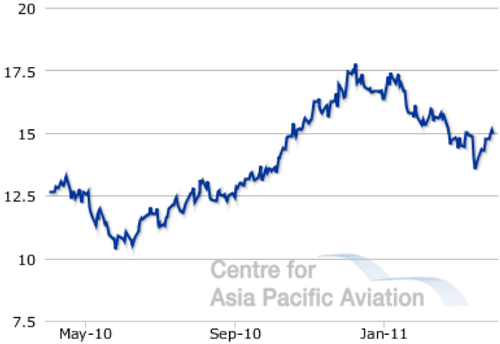 After returning to profitable growth in 2010, Lufthansa noted that “further recovery is in sight” for 2011, as a return to normal economic growth is expected. Lufthansa is expected to report increases in both revenue and operating profits in 2011, with this trend also expected to continue into 2012. Earning developments will be particularly driven by Lufthansa Passenger Airlines, by far the largest airline in the group.  Meanwhile, after a record year in 2010, Lufthansa Cargo is optimistic about 2011.

There are considerable opportunities for Air Berlin in 2011 related to its codeshares with numerous network carriers in the lead-up to its oneworld entry. The carrier is also seeing “good and/or stable demand in business and leisure travel” coinciding with an economic recovery and increasing consumer confidence, which is increased demand. Air Berlin is also seeing improved operational opportunities due to the integration of LTU, which is on track for completion on 04-Apr-2011.

Overall, Air Berlin expects a 5.4% increase in capacity (ASKs) in 2011, driven by intercontinental growth of around 15%. Euro and domestic growth of around 3% is anticipated. CASK including fuel is expected to increase by around 5%. 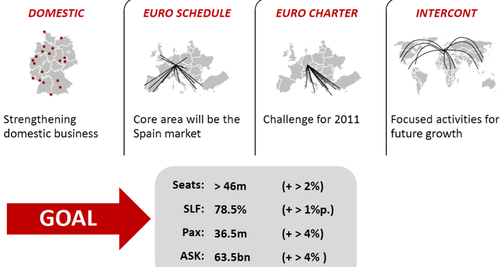 On the risk side, Air Berlin and Lufthansa both noted that the aviation tax will lead to pressure on yields while fuel price increases drive cost pressure. 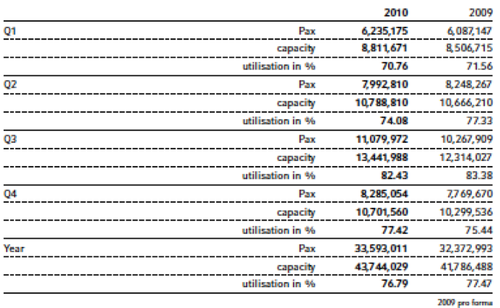 Pax development across the industry year-on-year* [%] 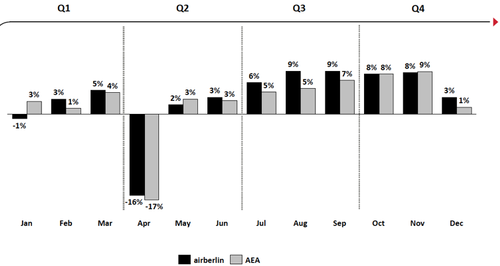 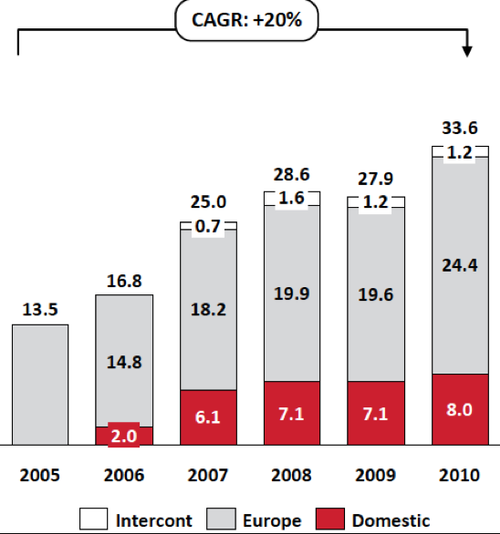