Safi Airways is planning a larger role in its home market of Afghanistan as the country’s outlook improves and business returns. In Afghanistan the experience is also a growing presence of hub carriers like Emirates, flydubai and Turkish Airlines. These three carriers have as much international capacity to Afghanistan as Afghan carriers have to the world. Safi believes it needs to respond to these carriers, and others, in order to remain relevant. It plans to make a decision in 1H2016 to acquire 10-20 narrowbody aircraft, for growth and replacement of its existing three narrowbodies.

Previously Safi planned a sizeable longhaul network, but a strategic change – partially necessitated by European blacklist status – has made Safi realise there is greater opportunity to act as a feeder carrier, transferring passengers to and from Afghanistan over foreign hubs such as Dubai. Safi wants to grow interline and codeshare bookings to 30-50% of its total within two years. Already Safi is the preferred carrier of the US government, with passengers transiting from United Airlines over Dubai.

Safi Airways is seeking a larger role beyond flying, and is looking to establish ground handling services in Afghanistan to have more control over delivery, to lower costs and also, potentially, to grow revenue with third party contracts. Safi Airways reports that it is profitable, but declines to give specific figures.

The urgency of the new fleet is driven by competitive pressure as more carriers grow in Afghanistan, and with Safi wanting to replace its ageing fleet. Safi’s workhorse A320 family is 17 years old, according to CAPA’s Fleet Database. 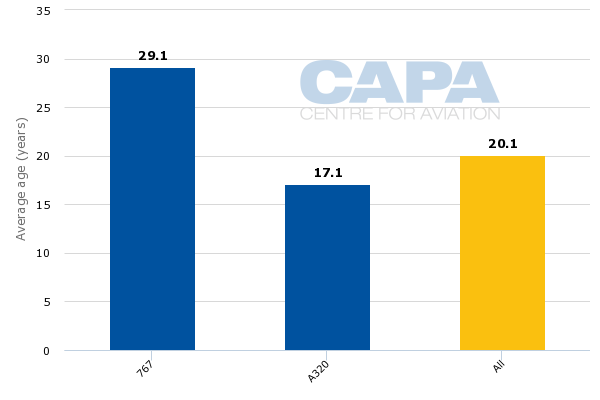 Although Safi is largely an Airbus operator (even though with only three Airbus narrowbodies), expediting deliveries is an objective. Seeking to acquire up to 20 aircraft could mean that Safi will switch its narrowbody operator from Airbus to Boeing, perhaps taking initial aircraft on lease in order to secure early deliveries. Separate from the A320/737 20 aircraft growth, Safi is examining regional aircraft (turboprops, not regional jets) for domestic operations and thin international routes.

Afghanistan’s airports, including Safi’s hub at Kabul, have specific performance requirements that preclude some aircraft from operating. Safi says its own fleet interests do not conflict with these restrictions.

For now Safi will retain its sole 767, which had been planned for use on long haul routes, but is now used for peak services on regional routes, such as during the Hajj.

Safi had longhaul ambitions when it launched operations in 2009, three years after it was founded. Safi had operated a service to Frankfurt with an A340-300, but this ended after 18 months when all Afghan carriers were placed on the EU's blacklist. Safi had considered longhaul services to Amsterdam and London, as well as Beijing and Washington DC.

Safi now expects longhaul flights to be at least three years away, and any “long haul” flights to be shorter in duration than previously planned (Frankfurt is seven hours from Kabul, and the sector is comparable in distance to Frankfurt-Dubai).

At the time of the Frankfurt service, Safi accommodated Germany's sizeable Afghan expatriate population, as well as various German organisations (commercial, NGOs, government) having ties with Afghanistan, but Safi has concluded that its challenge for longhaul is to build up feed; point-to-point demand is too limited.

Safi’s strategy for the next few years is to act as a regional and feeder carrier. There is growing demand to and from Afghanistan, but foreign carriers may not have a sizeable enough market to make Afghanistan an online point, or direct operations are prevented for operational/safety reasons. Foreign carriers in Kabul are mostly from the Middle East and CIS/Caucasus. Turkish Airlines has a daily A330 service to Kabul from Istanbul.

Passenger composition at Safi is almost entirely business and government people. Its sales profile is mostly outbound Afghanistan, sold by local travel agencies, but Safi wants to find a more balanced, 50-50 split of outbound/inbound. It also wants a significant shift from largely selling its own capacity to having a partnership network that sells 30-50% of revenue via interline and codeshare.

Safi has 19 interline partners listed on its website, and these are low volume. Safi is looking to grow its relationships with them, but the EU blacklist against all Afghan carriers may limit codesharing opportunities.

Safi is the preferred Afghan carrier of the US government. US law requires passengers on government business to fly under a US-operated or marketed (codeshare) flight, wherever possible.

Safi’s connections to Afghanistan can, for example, be accessed over Dubai via an interline with United Airlines, which serves Dubai from Washington Dulles, the major airport of the US capital. Delta also serves Dubai, with potential to interline, but intends to exit the market.

Safi's domestic network includes, according to its website, daily services to Herat and Mazar-e-Sharif, which are Afghanistan's third and fourth largest cities depending which statistics are cited. Flights between Kabul and Kandahar ( Afghanistan's second largest city), are suspended, according to Safi's website. 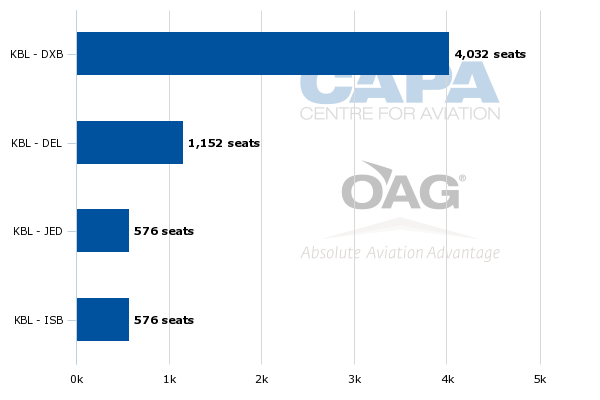 Dubai is Safi's largest route, with more than three times the services (double daily) of its next biggest destination (New Delhi, four weekly).

Safi has about half the capacity of flydubai, the market leader, and slightly more than Emirates. Ariana Afghan Airlines and Kam Air also serve the market. Those two Afghan carriers, in addition to Air India and SpiceJet, also serve the Kabul-Delhi market. Kam Air and Air India have the largest capacity, with Safi and SpiceJet about tied as third largest. Only PIA gives Safi competition on Kabul-Islamabad, according to OAG data, while Ariana is the only other competitor between Kabul and Jeddah.

Kam Air has five narrowbodies (MD-80 series) and one widebody (767) – more than Safi, and with a smaller international network than Safi. Kam Air only serves Delhi, Dubai and Dushanbe (as with Safi, international flights are all from Kabul). The Kam Air website lists aspirational future routes as being Frankfurt, Hangzhou, Kiev and Moscow.

Ariana, the Afghan flag carrier, boasts a larger international network than Safi, covering Ankara, Delhi, Dubai, Istanbul, Jeddah, Kuwait and Moscow, according to its website. Almost all of its international flights are from Kabul, while Delhi is also served from Kandahar.

Safi is looking to grow within the Middle East and CIS on routes within three hours of Kabul. Safi’s immediate priorities are two to three destinations in Iran, as well as service to Kuwait City.

Other markets under consideration are Lebanon, Uzbekistan and Kazakhstan, and Safi may consider serving international points from Afghan cities other than Kabul. Safi had considered a Kandahar-Dubai service for Dec-2014, but this has not eventuated.

Emirates, flydubai and Turkish have as much international capacity as Afghan airlines

Safi's sudden and rapid growth plan, albeit from a low base, is only partially explained by increasing business activity in Afghanistan. The larger concern for the carrier is its competitors seeking market share. This in turn will require Safi to maintain market share, likely at capacity volumes greater than what it believes are optimal. “We have to expand very, very quickly to put a foothold in this region so we don’t become irrelevant,” CCO Mr Bustos said, as reported by Gulf News.

For some markets, Afghan carriers hold a geographic advantage, since the nearest major hubs – in the Gulf or Istanbul – are a few hours away, making short/medium haul trips circuitous. But such markets are finite, and some passengers may be willing to trade off time to travel indirectly via a distant hub they prefer.

Hubs in the Gulf and Istanbul are well-positioned for intercontinental traffic and even some regional connections (such as other parts of the Gulf).

Airlines at these hubs operate formidable networks and are well-placed carriers to compete against. This makes a challenge for the long term, should Afghan carriers be allowed to serve longhaul markets. More immediately, these hub carriers are in direct competition with Safi's plan to transfer passengers to other carriers. 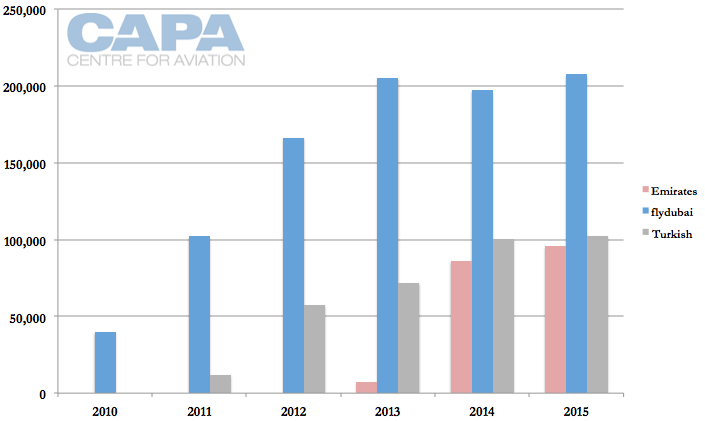 Flydubai's Afghan capacity has held firm since 2013; Emirates entered the market in 2013 and marginally increased its size over the current year. Turkish Airlines is similar in size in 2015 as in 2014. Collectively these three carriers offer approximately 1,100 international seats from Afghanistan a day.

This capacity is very broadly equivalent to the international capacity offered by all Afghan carriers combined. Etihad and Qatar do not serve Afghanistan. Flydubai is a point-to-point carrier but with a double digit share of its traffic connecting elsewhere.

In Dec-2011 Safi planned to extend an interline agreement with Etihad Airways to a codeshare relationship, in conjunction with a four weekly Kabul-Abu Dhabi route that Safi launched in early 2012. However, Safi ended the service in 2013. Although Safi still lists Etihad as an interline partner, Etihad does not have passenger service to Afghanistan; this makes a commercial relationship difficult to execute, as there are no overlapping routes.

Abu Dhabi is a significantly smaller market than Dubai, and Safi would likely have found volume difficulties, even with some feed. Safi even contemplated expanding its Abu Dhabi service to daily.

Even without the European blacklist, long haul would have been challenging

Safi is smartly focusing on regional growth. Its local experience – operational, safety and sales – cannot be understated in a difficult market such as Afghanistan. The EU’s inclusion of Afghanistan on its blacklist precludes some longhaul opportunities, but Safi could have considered service to non-EU points instead.

As Safi found, longhaul services to Frankfurt and China would have been challenging to fill and are increasingly risky, since major airlines dominate intercontinental paths. The three Gulf network carriers are in Safi’s backyard, linking Afghanistan to many parts of the world (although not to Asia, at least not conveniently so). Yields would be low, and profits less, if at all.

These challenges against developing longhaul are alleviated by the parallel opportunity to be a regional feeder carrier, with a motley group of foreign carriers doing the hard work: selling capacity. This can bring high yields with relatively low costs. Even if Safi did have longhaul flights, the small and difficult nature of the Afghan market would create partnership opportunities for Safi, and without longhaul flights of its own, it is a far more neutral airline for other carriers to work with.

In six years of operation Safi has amassed a fleet of four active aircraft. Bringing this to 10 within two years, to 20 in the medium term and potentially to more, (depending on the use of turboprops), is rapid growth. Safi acknowledges this is potentially more than it would like, but it needs to maintain a position against growing competition. Success will be highly contingent on Afghanistan’s stability and growth, as well as enhancing interlining and codeshares to grow partnership revenue.

In emerging markets where growth can occur quickly, but also disappear as quickly, flexibility and moderating ambitions can be necessary. Safi has already shown a more pragmatic approach by focusing on regional flying.