Abu Dhabi Airports Company (ADAC) plans to spend AED500 million (USD136.1 million) to raise the passenger handling capability at Abu Dhabi International Airport (ADIA) by 75% over the next two years. ADAC stated the capacity enhancement programme will be implemented to increase the throughput potential of the airport from 12 million to 20 million passengers p/a.

The project will include and expansion of terminal facilities, additional parking, enhanced baggage transfer systems, heightened perimeter security and new catering. The airport is also considering an increase in the number of gates to handle A380 aircraft.

The increase is to act as a sto-gap measure until its USD6.8 billion redevelopment plan is complete. ADAC has stated work on the plan is on track. When completed in 2030, ADIA’s handling capacity will increase to 40 million passengers p/a. The project includes construction of the new Midfield Terminal Complex and air traffic control tower.

ADAC plans to soon invite bids for the construction of the USD6.8 midfield terminal. ADAC has stated the construction of the midfield terminal is a key element of the broader Midfield Complex, which will include cargo and catering facilities, utilities and related infrastructure. The 630,000sqm terminal, designed by US-based Kohn Pederson Fox, is estimated to take five years to complete and will be built between the two runways at the airport. Phase one of the terminal’s construction will increase ADIA’s capacity to 27 million passengers p/a. Fourteen groups submitted pre-qualification bids for the terminal in Apr-2010 and the process was recently completed. The construction will also include a multi-storey carpark.

The first phase of the midfield terminal was originally expected to open in 2011, but has been pushed back a number of times. As a result, ADAC’s new CEO James Bennett has stated that his first priority is to ensure the delivery of the new midfield terminal by 2015. The former CEO of Metropolitan Washington Airports Authority stated improvements “had to be made to support the rapid growth of Etihad” and other airlines operating at the airport.

Etihad Airways, which moved to the AED1.1 billion (USD299.4 million) Terminal 3 last year, is expected outgrow capacity there after just two years in operation. T3 expanded ADIA’s capacity from 5 million to 12 million passengers p/a. Etihad is now working with ADAC on the expansion. At present, the carrier has a massive 66% share of capacity at the airport, while all other carriers operating to/from the airport having only single-digit capacity share. 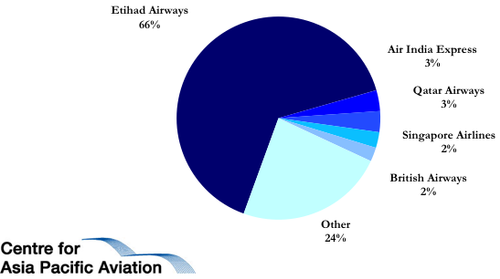 ADIA’s 109m air traffic control tower is also expected to be completed in 2011. Thales, awarded a USD36.7 million contract for the tower in late 2008, will provide systems and the command centre for the 20-storey tower, to be located between the first and second runways.

In other construction, ADIA awarded Depa Limited JV specialist contractor company Mivan Depa a contract for the refurbishment of several areas of Terminal 1 at the airport.

ADAC and Premier Inn, a UK budget hotel operator, have also signed an agreement to build a Premier Inn hotel at ADIA. The AED120 million (USD33 million), 300-room hotel is expected to be complete by 2012.

The expansion comes as ADIA expects to handle 10 million passengers this year, after reporting an 11.7% year-on-year growth in passenger numbers for 1H2010 to 5.1 million. ADIA attributed the improvement to a rebound in international passenger traffic and Etihad’s increased frequencies and new destinations and the launch of new services by new and existing airlines at the airport. Cargo tons increased 20.3% to 209,958 for the period.

Passengers numbers are also expected to further increase in 2011, with Abu Dhabi Tourism Authority aiming to attract 1.9 million hotel guests to the emirate in 2011, which it hopes will contribute 11.1% to the emirate's non-oil GDP. The 1.9 million target is a 15% increase over its 2010 target. The emirate plans to shift away from its business tourism-dominated profile to a balance between business and leisure tourism.

Passenger numbers are rising not only due to the continuous expansion of Etihad, but also a number of international carriers. There are 52 airlines operating to/from ADIA at present, which is only set to increase as the airport grows to become a regional hub.

Retail sales also on the up

ADIA also reported a 19% year-on-year improvement in duty free retail turnover for 1H2010, to USD75 million, outperforming the airport’s passenger numbers growth over the same period. Spend per passenger also increased for the half, up 7.2% to USD14.47.

ADIA CCO Huraiz Almur bin Huraiz stated the results are proof the airport is achieving its goal of encouraging passengers to spend more. The CCO attributed the improvement to a recovery in consumer confidence and ADAC’s investment programme in Terminal 1 and an upgrade in retail offerings in Terminal 3.

In other ADAC developments, the company awarded SITA a five-year contract for maintenance at all five of its airports. Under the contract, ADIA will become the first major hub in the Middle East to use the new IATA CUPPS (common-use passenger processing systems) passenger processing standard.

In anticipation of the traffic growth, ADAC has commenced a redevelopment plan for Al Bateen Airport.  Phase one is tailored to the necessary developments needed to accommodate the Formula 1 race. Within these developments, Al Bateen also commissioned a new instrument landing system and GNSS/VOR/DME-based precision approach in Sep-2010, meaning the airport will no longer be limited to VFR operations. The installation of the precision landing aids has allowed more operators to use the airport.

ADAC expects Al Bateen to take a leading position in promoting the UAE as a hub for business aviation. To promote the region, the airport offered free landing and parking to all visiting VIP aircraft using the Executive Terminal during the Abu Dhabi Formula 1 race between 11-Nov-2010 and 14-Nov-2010. The airport has capacity to handle 70 business aircraft at one time. Based operators at Al Bateen include Al Jaber Aviation, Falcon Aviation, Prestige Jet and XO Jet.

ADAC plans to create its own FBO team for the airport next year. Other planned developments include the construction of an airport hotel and modernisation of the airport’s access roads.

ADAC to invest in Zanzibar Airport

Abu Dhabi Airports Company (ADAC) has reportedly expressed interest in extending its operations in Zanzibar, Tanzania. ADAC President Jeff Revnolds stated that the airports investor and operator has been attracted by the development of Zanzibar Airport and the “booming” tourism industry. ADAC is reportedly working with Tanzania’s Civil Aviation Department and Ministry of Communication and Transport to explore options for its operations in the country. Mr Revnolds stated ADAC is confident Zanzibar Airport has the ability to attract international airlines, now that its runway has been improved and passenger terminal is to be expanded.