WestJet CFO Vito Culmone touted WestJet’s success to investors at last week's Dahlman Rose Transportation conference, saying all metrics were ahead of last year. He reported August posted a record load factor at 83.3% while overall revenue passenger miles rose 7.7% and year-to-date revenue passenger miles (RPMs) were up over 9%. Mr Culmone also echoed peers speaking at the conference that forward bookings remain healthy and its capacity increases continued to be absorbed by the market.

As with is low-cost counterparts south of the border, WestJet is in a growth mode, improving its footprint in Eastern Canada as well as in the trans-border and near international markets. More than half its service is to destinations outside of Canada. That shifts higher in the winter when it increases service to sun destinations and then switches back in summer when about 75% of capacity is in Canada.

“Our cost profile is a fundamental driver of out success,” he told investors. “We are now leveraging the investments we made in converting reservations to Sabre and starting to reap the benefits, especially as it relates to international codesharing partnerships with Cathay Pacific and American Airlines.”

In addition to codesharing relationships, it also has interline relationships with JAL, Air France, Qantas, Alitalia, Korean Air, El Al, China Airlines, Dragonair and China Eastern. Its philosophy mirrors both Alaska and JetBlue in capitalising on many connections rather than a single alliance membership.

“There are 70 other global airlines beating a path to our door,” he said. “It’s a way to sell beyond their gateways into Canada and with Sabre we are getting more traffic spill and expect a significant amount of revenue to be generated.”

In addition to growing to 71 destinations since its inception in the mid-1990s, WestJet is expected to post CAD3 billion in revenues this year - a 30% compounded annual growth rate since the beginning. 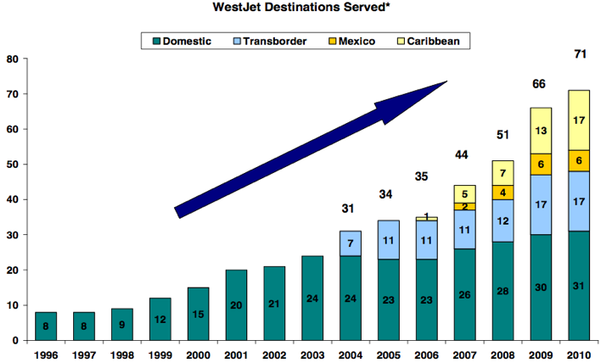 Mr Culmone reported that WestJet has been profitable in 55 out of 57 quarters and, from a return-on-invested-capital perspective, the last 12 months have run between 10.3% and 10.4%, just shy of its 12% goal.

“We are a rare airline,” he told investors. “We’ve continued to grow and continue to have industry-leading operating margins.” 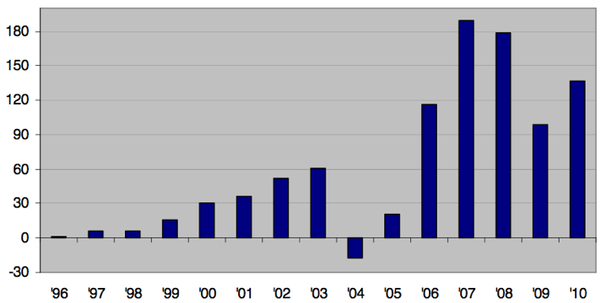 A close look at pricing shows a steady improvement in yield since the back half of 2010, he noted, adding the company maintained that pace through the first half of 2011. With a 90% load factor, WestJet is enjoying a yield of 18 cents 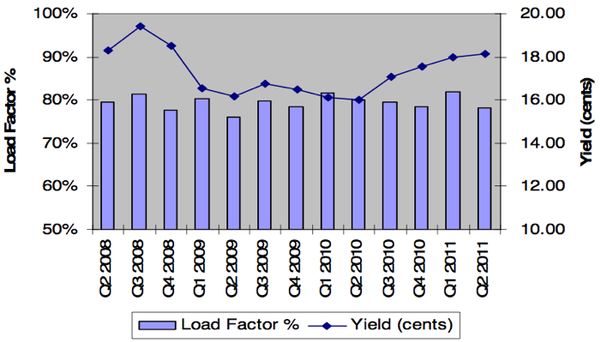 With a relatively young fleet, it is expecting an additional 39 aircraft through 2018, deferring some to be able to provide for the maximum flexibility. It plans to increase capacity if the market warrants it by retaining 38 leased aircraft scheduled to expire during the period. Depending on the economy, its fleet could rise as high as 135 aircraft or as low as 102. 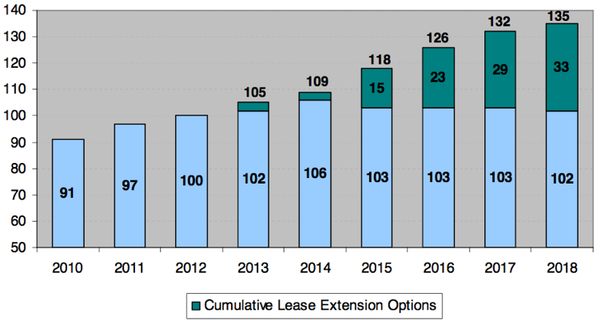 Mr Culmone turned to costs, saying WestJet was one of the lowest cost bases among North American competitors, providing it with a significant advantage over Air Canada. Break-load factor is in the low 70s. In its company is Southwest, Alaska and JetBlue. 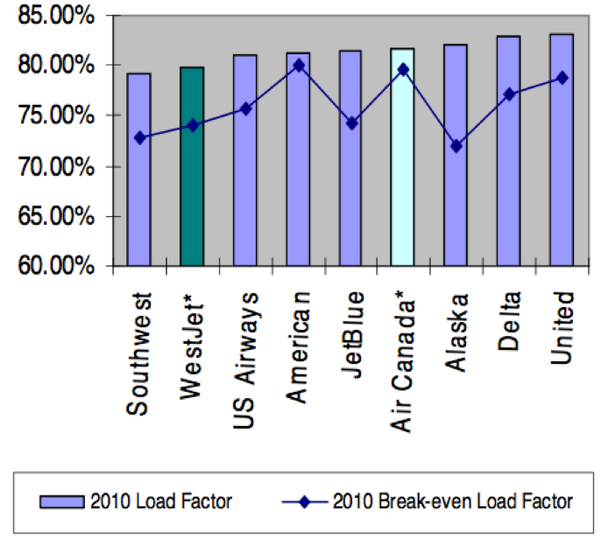 Cost per available seat mile, ex fuel, has hovered in the mid-to-high 8.0 cents dropping to 8.5 cents in 2008/2009 and then rising to 8.9 cents in 2010 and remaining at that rate in the first half of 2011. That cost structure was despite the increased cost of fuel. He said that Canadian costs added a one-cent premium compared to US costs. However, given the strength of the Canadian dollar it is paying less for fuel since fuel is acquired in US dollars. 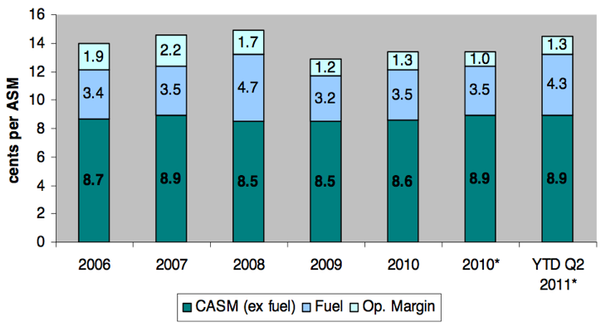 Year-to-date earnings were up 700% or CAD60 million compared to the same period in 2010. Yield was up 11.5% bested only by Allegiant and JetBlue. Mr Culmone said WestJet’s model was designed to generate cash flow, increasing it by 25.8% to USD260.2 million in the first half compared to 1H2010. Revenue per available seat mile is up 11% and revenues are up 23% while CASM actually dropped 1.7%. The company is targeting flat CASM for 2011 and 2012. 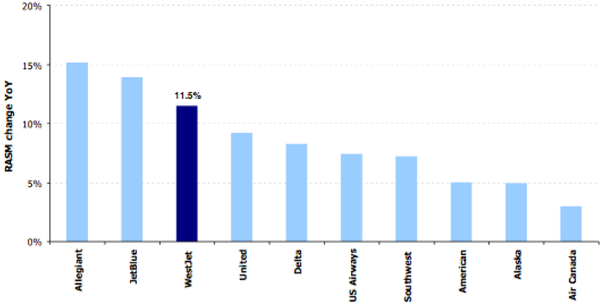 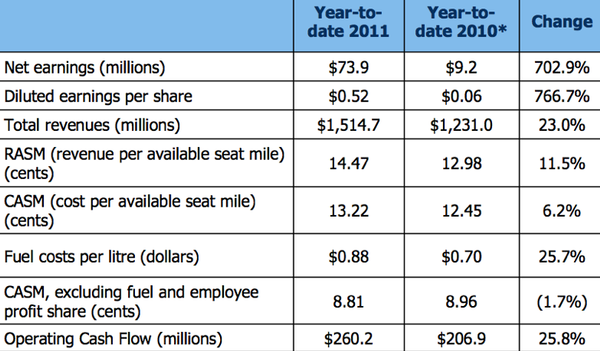 *Financial information has been restated in accordance with IFRS
Source: WestJet

He also noted that, compared to its peers in 2010, it had a 7.8% EBT margin, bested only by Ryanair, Singapore and Alaska amongst its world peers and only by Allegiant and Alaska among North American peers.

Financially sound – FY 2010. WestJet ranks among the top in the industry 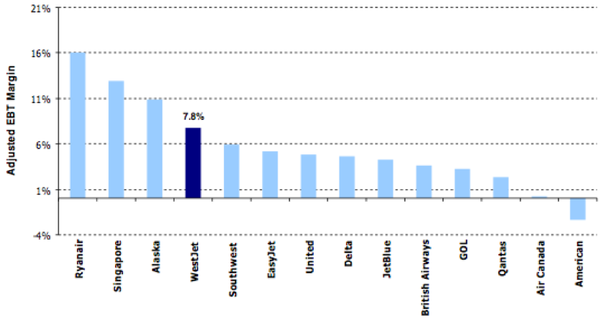 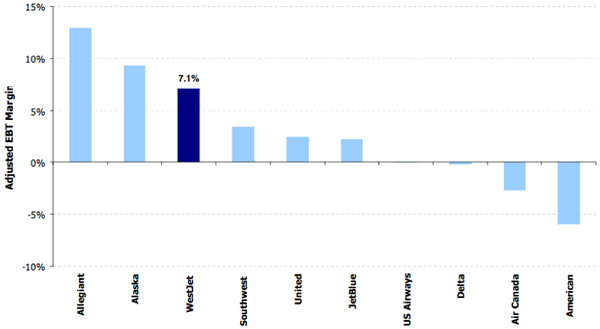 Mr Culmone also explained the value of WestJet vacations in expanding operating margins. The vacation market is a US20 billion industry with WestJet competing for USD10 billion of that. WestJet, however, has a competitive advantage over traditional tour operators because it can offer travelers the flexibility on length of stay - as long or as short as they want - because they can fly on WestJet’s scheduled flights. Nor does it limit its offerings to a single origin gateway but sources traffic from its entire network.

He noted the carrier’s capital structure has allowed it to fund growth while maintaining one of the strongest balance sheets in the industry. It ended the second quarter with CAD1.2 billion in cash. Only Allegiant had more cash. It is also one of the least leveraged North American carrier with Allegiant, Southwest and Alaska besting it. 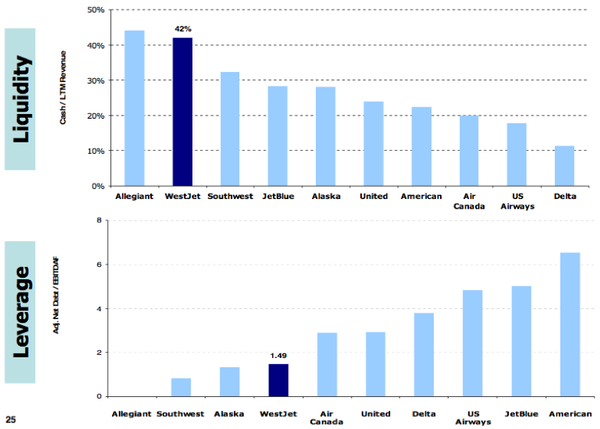