Mexican low-cost carrier Volaris is tweaking its US operations after making an aggressive push into transborder markets in 2011 in the aftermath of Mexicana's collapse. The airline is cutting flights from Guadalajara to San Diego, a route it launched a little over a year ago in May-2011, and is suspending Mexico City to Oakland at least temporarily, as it evaluates switching those flights to San Francisco. At the same time Volaris is growing its domestic network, with a particular push from its third largest base in Guadalajara.

Mexico's four remaining major carriers – Aeromexico, Volaris, Interjet and VivaAerobus – seized on the opportunities created by the collapse of Mexicana in Aug-2010. Initially the four carriers expanded domestically but in early 2011 began expanding in US markets. Expansion in the US in the immediate aftermath of Mexicana's collapse was not possible due to US FAA Category 1 restrictions, but these were lifted at the end of 2010 when the FAA upgraded Mexico back to a Category 1 safety rating.

Volaris has experienced the most pronounced transborder growth following Mexicana's exit and has built up a US network that by 15-Jul-2012 will encompass eight destinations and nearly 20 transborder routes. Orlando is set to become Volaris’ eighth US market on 14-July-2012, when it launches two weekly flights from Mexico City. 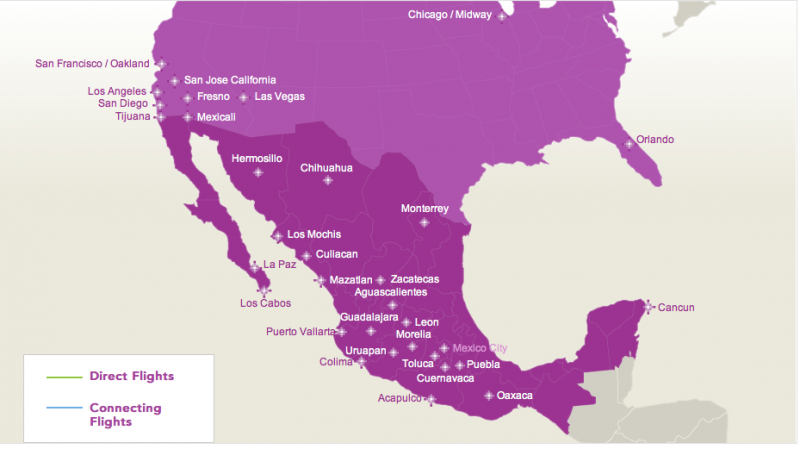 Orlando will be the carrier’s first destination on the US east coast. Back in 2009 Volaris evaluated serving Fort Lauderdale from its Toluca base, which is 70km from Mexico City and serves a secondary airport to Mexico City International. In filing for Fort Lauderdale traffic rights in 2009, Volaris estimated it would carry about 600,000 annual passengers in the market during 2010. But Volaris never used its Fort Lauderdale traffic rights and for now Volaris has settled on Orlando, which is a large tourist and convention destination, as its first US east coast market.

Some of Volaris' route authorities to the US were secured on a temporary basis and may have to be returned to Mexicana should Mexicana resume services. Volaris and other Mexican carriers may also have to return slots at Mexico City, some of which are used for transborder services.

Prior to its collapse Mexicana accounted for roughly 35% of Mexico City’s operations. Some of Mexicana’s slots at Mexico City were reallocated on a temporary basis to Aeromexico, Volaris and Interjet after the carrier ceased operations. Mexicana is now attempting to re-secure those slots to support its yet to be determined relaunch after being acquired by Spain’s Med Atlantica earlier this year. Management of the Mexico City Airport is reportedly arguing that Mexicana will not require all of its slots if and when it relaunches since it will re-enter the Mexican market with a significantly smaller number of aircraft than it operated when it ceased operations.

Volaris is not paying significant attention to declarations by Mexicana’s new owner that the airline will re-launch in the coming weeks, and instead is tweaking its transborder network that has flourished in Mexicana’s absence. Over the last 22 months Mexicana has attempted to re-launch several times under different groups of new owners. As every attempt thus has failed to materialise, existing carriers have continued to plan their expansions under the assumption Mexicana will not re-launch. Even if Mexicana does re-launch this time, the new carrier will be much smaller than it was prior to the suspension and will likely have a limited impact given the existing carriers have already expanded to entirely fill the void left by the original Mexicana.

About a month after its Orlando launch Volaris will reduce capacity from Mexico City to Oakland in California, a route the carrier debuted in May-2011. Schedules in the Volaris booking engine show it will not operate any non-stop flights on the route the last two weeks of August. While some Mexico City-Oakland flights will be operated in Sep-2012, the Volaris booking engine shows that from Oct-2012 there will be no non-stops and all passengers looking to travel between Oakland and Mexico City will be routed through its base in Guadalajara.

While Volaris is the only carrier on the route, Oakland is just 27km from the larger San Francisco International Airport, where both Aeromexico and United offer about 2600 weekly one-way seats to Mexico City compared with about 600 now offered by Volaris on Mexico City-Oakland. Mexico City is Aeromexico’s hub while San Francisco is a hub for United.

Data from the US Department of Transportation (DoT) show load factors on Volaris’ flights to Oakland (which also includes service from Guadalajara) were 78% on its 144-seat A319s in 2011. The strong loads were likely driven by flights from Guadalajara, where Volaris accounts for the majority of the airport’s total capacity at 34% compared with just a 10% share in Mexico City. 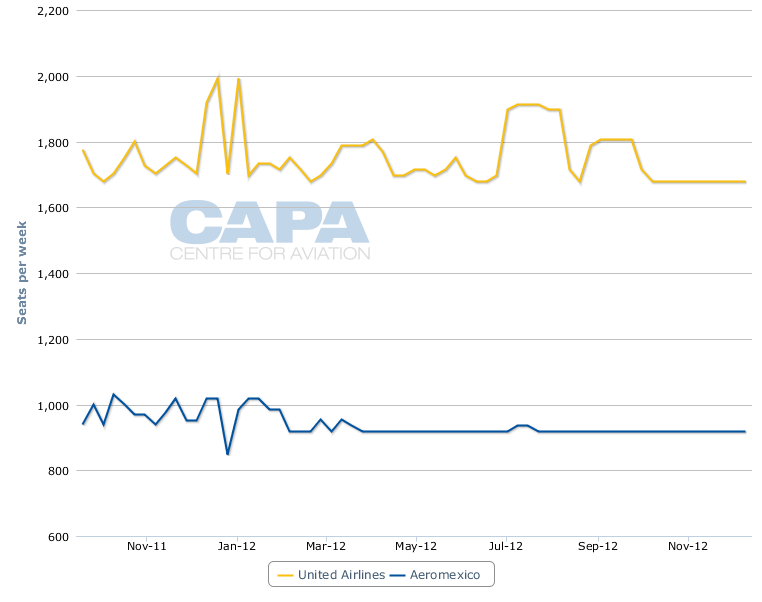 While Volaris' Guadalajara-Oakland route, which was launched in 2009 and was the carrier's first international route, has been highly successful, the newer Mexico City-Oakland route has proven to be more challenging due primarily to the intense competition between the San Francisco area and Mexico City. While Volaris is pulling back on Oakland-Mexico City for now, the carrier may later resume the route even if it also opts to launch service to San Francisco from Mexico City.

Oakland Airport is confident Volaris will continue to grow at Oakland given the airport's low cost structure and the fact that there are more Mexican nationals and immigrants residing on the Oakland (east) side of San Francisco Bay than on the San Francisco (west) side. While it is uncertain if Volaris will continue to serve Mexico City-Oakland, its Guadalajara-Oakland service remains highly successful. The carrier continues to include the Guadalajara-Oakland route in its booking engine on a year-round basis with at least one daily flight and often a second frequency. During the peak season Volaris has even previously operated three flights on some days in the Guadalajara-Oakland market.

On its new flights to Orlando, Volaris will compete with Aeromexico but with just two initial frequencies, dropping to one in Sep-2012. As a result, the LCC is not providing significant competition or capacity that will worry its larger rival, which offers about 2100 weekly seats in the market.

With Orlando Volaris is taking a similar approach to VivaAerobus, which generally serves its transborder and some of its leisure-focused domestic routes with a low frequency operation. VivaAerobus launched services to Orlando in Nov-2011 with just one weekly flight from its Monterrey base. It currently operates two flights on the Monterrey-Orlando route, both on Saturdays, according to Innovata data. 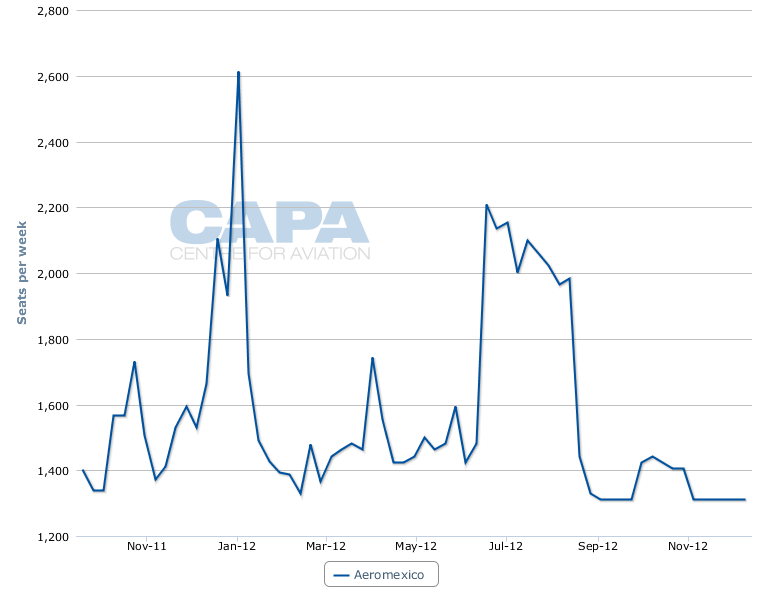 During Aug-2012 Volaris is making further route adjustments when it ends four weekly flights from Guadalajara to San Diego and launches new service from Culiacan to Los Angeles, eliminating a connection in Guadalajara.

Volaris to give Culiacan international service

The new service to Los Angeles will be the the only international route pairing from Culiacan, located in Northwestern Mexico. Delta Connection previously served the Los Angeles-Culiacan route with regional jets before dropping it about four years ago.

Volaris is Culiacan's largest carrier offering flights to Tijuana, Mexico City, and Guadalajara. The carrier bills the new direct flights to Los Angeles as more convenient than connecting through Guadalajara.

Data from Mexico’s DGAC show that the number of domestic passengers travelling through Culiacan increased nearly 10% year-over-year during Apr-2012, and 5% for the first four months of the year. While the increasing traffic likely warrants direct flights to Los Angeles, it is unlikely Culiacan will transition into a major US gateway for Volaris or any other carrier.

New push for Volaris from Guadalajara

As Volaris tweaks its US transborder flights in the upcoming months the carrier is also expanding domestically as it has either recently launched or plans new service from Guadalajara to Chihuahua, Monterrey, Puebla, Los Mochis and Cancun. Volaris obviously is aiming to strengthen its position in Guadalajara, which is Mexico’s second-most populous city and often dubbed as the “Silicon Valley of Mexico”. Guadalajara’s domestic passengers numbers increased 2.3% year-over-year in Apr-2012 and grew 10% for the first four months of the year.

The Guadalajara-Monterrey market has become even more crowded with the entry of Volaris, which now accounts for only about a 9% seat share, while Aeromexico, Interjet and VivaAerobus account for 40%, 27% and 25% of the weekly seats, respectively. Even though it has a much smaller offering in this market, it is important as Volaris builds up Guadalajara for the carrier to offer a link to Monterrey, which is also a key business market in northeastern Mexico. 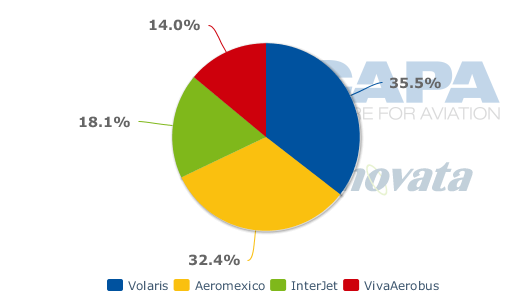 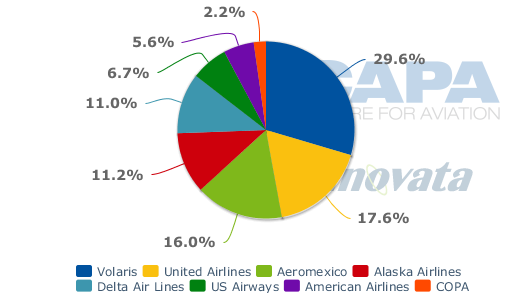 With its expansion in Guadalajara, Volaris is taking advantage of continued growth in the Mexican domestic market. Domestic traffic in Mexico grew by 15% year in Apr-2012 to 2.3 million passengers. During the first four months of 2012 domestic passenger traffic grew by roughly one million travellers to 9 million.

Aeromexico’s domestic market share fell by 1 ppt in Apr-2012 to 19% while Aeromexico Connect had a sharper decline of 3 ppts to 18%. VivaAerobus saw its domestic share increase 1 ppt year-over-year to 12%. During Mar-2012 the carrier launched two new services from Cancun to Villahermosa and Tuxtla Gutierrez, serving each destination twice weekly. The carrier has also introduced service from Reynosa to Mexico City.

Interjet, Volaris and VivaAerobus have grown their domestic market share significantly since Mexicana’s demise. During Apr-2010, Grupo Mexicana’s share of the domestic market was 29%, with Grupo Aeromexico accounting for a 32% share (includes Aeromexico and Aeromexico Connect). Since that time Interjet has grown its share 11 ppts to 24%, while Volaris has enjoyed 8 ppt growth to 21%. VivaAerobus has also enjoyed almost 5 ppt growth to secure its 12% share. Those three carriers have quickly filled the gap created by Mexicana, raising further questions about Mexicana's attempted revamp and how it can be viable in a market that has become more rational since its exit.

Expansion by Mexico's three LCCs along with expansion by Aeromexico and US carriers have also filled almost all of the large void left by Mexicana in the US-Mexico market, where Mexicana was the market leader. While Volaris has expanded the most rapidly in the US market over the last 18 months, Interjet last year entered the transborder market with flights from Mexico City to Miami and San Antonio and from Toluca to San Antonio. VivaAerobus also has expanded its relatively small US network, adding Miami and Orlando in 4Q2011.

Meanwhile, Aeromexico has continued its transborder expansion, launching flights earlier this year from Mexico City to Atlanta and Washington Dulles. It also plans to launch flights from Cancun to New York JFK on 01-Jul-2012 and has applied for approval to launch daily service from Monterrey to Miami, a route currently operated by VivaAerobus.

As it makes short-term tweaks in its transborder markets, Volaris has won approval from US authorities for further US expansion into markets once operated by Mexicana. It recently filed an application with the DoT for conditional extrabilateral authority to launch flights from Mexico City to San Francisco and Denver until Mexicana resumes services, and was granted approval to launch flights between 15-Jun-2012 and 15-Jun-2013.

Volaris’ desire to serve San Francisco is particularly interesting given it is at least temporarily suspending Mexico City-Oakland flights. Volaris would become the third carrier offering flights from Mexico City to San Francisco. On the Mexico City-Denver route, United currently only offers three weekly flights on weekends. The City of Denver has pushed for Volaris’ to gain approval for flights from Mexico City, arguing the market has lacked year-round service since Mexicana’s collapse.

The second half of 2012 could prove to be a crucial period for the dynamic US-Mexico market. Volaris is poised for further expansion and would be the largest beneficiary if Mexicana again fails to relaunch, or if the new Mexicana is able to resumes services but is short-lived.