Before the UK leaves the European Union, it will have to negotiate a new bilateral air service agreement with the rest of the bloc in order to ensure traffic rights for its airlines. It must also negotiate new bilaterals with 17 non-EU countries where rights are currently granted under EU agreements.

The most important of these extra-EU agreements will be a new UK-US deal, necessary once the UK falls out of the EU-US open skies agreement. After the EU (and other members of the ECAA), the US is the UK's second most important aviation market by seats and ASKs. Apart from the internal European aviation market, the current EU-US open skies agreement, to which the UK is a party, is one of the world's most liberal international air services agreements.

This provides a helpful backdrop to US-UK negotiations, but there are also powerful US aviation interests that have resisted liberalisation (for example, the opposition to the Gulf airlines and to Norwegian's Irish and UK subsidiaries). Nobody wants a return to the old Bermuda II UK-US agreement, but complexities such as nationality clauses may challenge the negotiators. The time is ripe for a rethink of the whole bilateral system.

These issues and the wider role of the bilateral and open skies agreements will be the subject of a panel discussion at the CAPA Airline Leader Summit in Dublin on 17/18-May-2018, entitled 'Trapped in the geriatric framework: the outlook for Europe and the North Atlantic as Brexit looms'.

UK-US is a market of healthy growth

The market between the UK and the US has enjoyed fairly healthy growth in recent years. Based on the seasonal peak week of 23-Jul-2018, weekly seat numbers this summer will be up by 5.7% year-on-year and have grown at a compound average rate of 6.0% over the past five years. 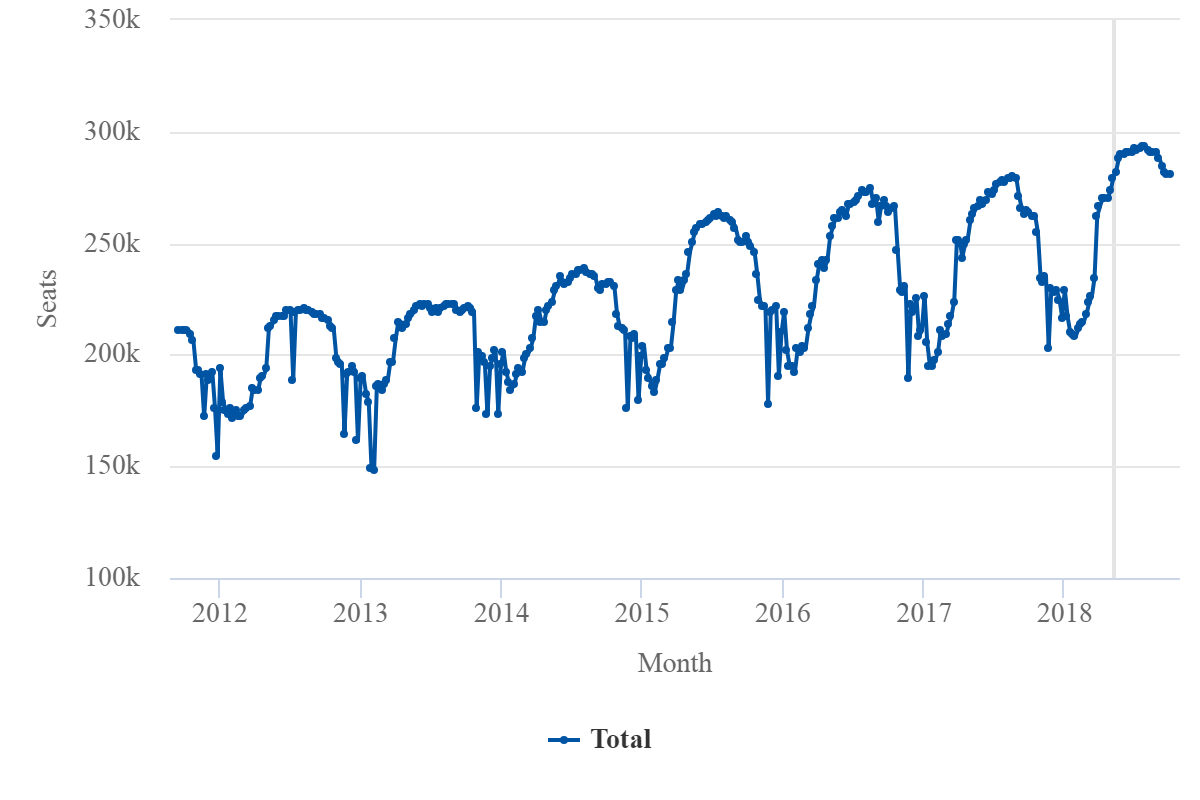 Through membership of the EU, the UK's airlines have access to international aviation markets in both the European Common Aviation Area (made of the European Union and eight other countries that are parties to an agreement that effectively treats them as EU member states for the purposes of market access) and in Switzerland (which has a separate bilateral with the EU giving it international access to the ECAA).

Treating the ECAA and Switzerland as one market, this bloc accounts for 70.7% of the UK's international seats in the week of 23-Jul-2018 – by far the biggest market, according to OAG.

The US is the UK's number two international market after the ECAA/Switzerland, accounting for 8.9% of its non-domestic seats. It is also the second biggest individual country market for the UK, after Spain, which accounts for 18.6% of international seats.

Analysing capacity by ASKs, which gives a closer indication of each market's importance to airline revenues, the US is more important. The ECAA/Switzerland remains the UK's number one market, taking 36.8% of international ASKs, while the US' share rises to 22.2%.

Moreover, the USA has a bigger ASK share than any individual ECAA country to/from the UK (Spain, the largest, has 12.1%).

The EU has an open skies agreement with Canada and member states have authorised the European Commission to negotiate EU level agreements with Turkey and the UAE. New EU agreements are also proposed with China, Mexico, Armenia and the ASEAN bloc. 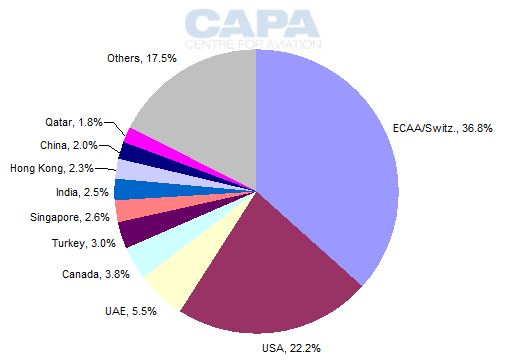 Just as the US is a big aviation market for the UK, the reverse is also true.

The UK is the biggest individual country market to/from the US, with a share of 11.6% of US international ASKs, compared with 6.8% for the number two, China.

As a bloc, the rest of the EU (including Norway and Iceland, which are parties to the EU-US open skies agreement), accounts for 27.3% of international ASKs to/from the US.

This means that the UK, once it leaves the EU, will be the second most important international market to the US. 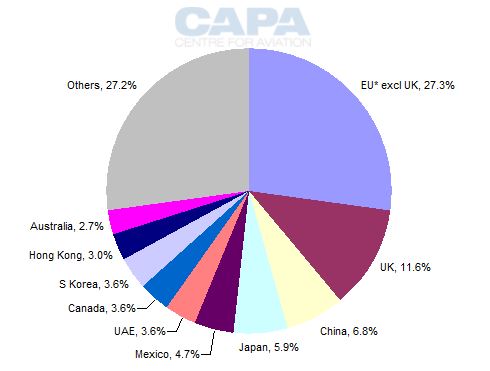 The last bilateral air transport agreement between the UK and the US, known as 'Bermuda II' was signed in 1977 (as a renegotiation of the earlier Bermuda agreement signed in 1946 and named after the island on which the negotiations took place). It was revised in 1981, 1991, 1995 and 1997 and lasted until the EU-US agreement came into effect in 2008.

Far from an open skies agreement, Bermuda II was very restrictive with regard to access to Heathrow and Gatwick, although access to all other airports was liberalised in the 1995 revision. Access to Heathrow was limited on the UK side to British Airways and Virgin Atlantic and on the US side to American Airlines and United.

After the liberalisation created by the EU-US deal, Bermuda II serves as a template to avoid.

The EU-US agreement replaced Bermuda II, but technically has not yet killed it outright

The EU-US agreement was signed in 2007 and applied from 2008. Technically, it is being provisionally applied, pending completion of the necessary legislation by the European Parliament to bring it into force (this could only happen after ratification by every member state, a lengthy process).

In practical terms, there is no difference between the agreement being provisionally applied and it being in force, except in one potentially significant manner. While the agreement is only in provisional application, the old bilateral agreements between the US and individual EU member states are suspended, but not yet superseded.

This raises the possibility that the old Bermuda II bilateral between the UK and the US, which is dormant but not extinct, could return if the UK leaves the EU before the EU-US agreement officially comes into force.

The EU-US agreement is expected to come into force fairly soon, and this seems very likely to be before the UK's departure from the EU. Moreover, talks between the UK and the US on a new bilateral are understood to be proceeding well. A return to Bermuda II seems unlikely, but its zombie-like status acts as a spur to a better outcome.

However, it is not clear whether or not the new UK-US agreement will be as liberal as the EU-US deal in every respect. An agreement giving liberal access to all UK and US airlines to and from any point of departure in either country seems entirely uncontroversial and is supported by all stakeholders.

The potential for difficulty arises from the more controversial topic of ownership and control. The EU-US agreement allows airlines of any EU nationality to fly between the UK and the US and it seems unlikely that this would be continued into a UK-US agreement. Rights are likely to be restricted to UK airlines (and their US counterparts).

nationality of the UK's leading trans-Atlantic airlines is not clear-cut.

A new UK-US deal may have to take a more relaxed view of foreign ownership limits than in the past. The UK seems likely to agree to this, since it is UK airlines that have blurred nationalities.

BA and Virgin Atlantic have complicated ownership from a nationality standpoint

British Airways' owner IAG will need to demonstrate that it has EU nationality so that its Iberia, Vueling and Aer Lingus subsidiaries can still enjoy traffic rights as EU airlines, while simultaneously ensuring UK nationality for BA. As a listed company IAG has an ownership that fluctuates, and it may need powers to force non-EU nationals to sell shares in order to be majority EU-owned, but it also needs to preserve BA's Britishness.

The ownership of Virgin Atlantic, the UK's number two North Atlantic airline, is in the process of changing. It is currently 49% owned by Delta and 51% owned by the Virgin Group (a UK company), but Air France-KLM has agreed to buy a 21% stake from the Virgin Group and this would leave it only 20% owned by UK nationals.

A further, but related, grey area exists regarding the treatment of UK-registered, UK-based subsidiaries of non-UK European airline groups that currently fly between the UK and the US. Norwegian Air Shuttle's subsidiary Norwegian Air UK flies US routes from Gatwick.

Although Norway is not part of the EU, it is part of the European Common Aviation Area and a party to the EU-US open skies agreement. Currently, this means that any Norwegian Group company can operate between the UK and the US.

Under a future UK-US deal, this could only be performed by a subsidiary that qualified as a UK carrier under the terms of that agreement. This would either require a relaxation of the limit on majority foreign ownership that typically applies in bilaterals, or a change to Norwegian Air UK's ownership structure to comply with such a limit.

The Irish-registered Norwegian Air International also currently flies UK-US routes (from Edinburgh and Belfast), but these could presumably be transferred to Norwegian Air UK if the new deal solves this issue.

Under a new UK-US deal, it may also not be possible for the current rights of UK airlines to fly US routes from other EU countries to continue.

These rights, granted by the EU-US deal, have only been taken up by the British Airways subsidiary OpenSkies, on flights from Paris to New York, but IAG's new long haul low cost operator Level will assume these routes.

Level is currently operating under Iberia's AOC and, as a Spanish operator, will fly between France and the US under the existing EU-US agreement.

UK-US talks are reportedly progressing well, with both sides convinced of the benefits of a liberal approach that stays as close as possible to the current EU-US agreement. As for UK-EU talks, almost no progress has been made, if, indeed, formal talks have actually started.

In both cases, the UK's so-called red lines make it highly improbable that the existing market access rights of UK airlines can be preserved in every detail.

See related report: Brexit and aviation: UK airline access to EU markets to diminish, as airlines prepare for the worst

Brexit could be a catalyst to reform the bilateral system

It seems bizarre that, in the 21st century, a globally vital industry such as aviation should still be clinging to a system of bilateral agreements established in the 1944 Chicago Convention.

Where there has been liberalisation of the international traffic rights regime, such as within the European Union and across the North Atlantic, there have been enormous benefits in lower prices and increased connectivity, greater consumer choice, and economic growth.

The possibility, likelihood even, that UK-EU and UK-US market access will be even an iota less liberal and more restrictive than at present serves no purpose and no interest.

The occasion of Brexit provides an opportunity for governments, regulators and the aviation industry to discard the bilateral system in favour of a more flexible and up to date approach to international traffic rights.