US Airways and American have finally ushered in the last deal among US major carriers that allows those airlines to close the book on consolidation that was opened in the last decade when US Airways merged with America West. While the arguments that the merger between US Airways and America will create a much more stable US industry are sound, the major competitors of the “new” American are not resting on their laurels and will enjoy the competitive advantages of having overcome the typical merger hurdles – labour and systems integration – as the combined carrier faces an 18 month integration period once the deal closes during 2H2013. As United’s recent integration challenges illustrate, declaring synergies on paper and delivering those results in a targeted timeframe can easily be derailed and drag down financial performance.

Based on 2012 performance American and US Airways combined recorded roughly USD39 billion in revenues and carried 198 million passengers, surpassing both Delta and United in both of those metrics. By their own estimates, American and US Airways conclude the combined carrier can deliver USD40 billion in revenues based on the projected financial performance for each carrier and deliver USD1 billion in synergies beginning in 2015.

Working to tout strength of combined network to corporate customers

Unlike the mergers of Delta and Northwest and United and Continental, US Airways and American believe that the bulk of the estimated synergies from their tie-up – USD900 million – will be derived from network optimisation. The carriers conclude by combining their network to offer roughly 6,700 daily flights to 336 markets in 56 countries, they can win back key corporate clients that have jumped to Delta and United as a result of the networks those carriers offer after completing their respective mergers.

US Airways president Scott Kirby told investors on 14-Feb-2013 that Delta during the last couple of years had stolen corporate clients in the lucrative and strategic New York market by undercutting other carriers on price. But Delta during that time has also worked to achieve premiere status in the New York market ironically through a slot swap with US Airways that allowed Delta to build a hub at LaGuardia.

Delta has also worked to bolster its presence at JFK, and has touted its competitive strength against American in the New York market. The carrier recently stated it was confident of closing the performance gap with American in 2013.

Estimated synergies of the US Airways-American merger: 14-Feb-2013

Mr Kirby believes that a combined US Airways-American in the key New York market will be much stronger than each carrier is individually. Data from Innovata show that for the month of Feb-2013 a combined US Airways and American accounts for 31% of the departures from LaGuardia compared with 40% for Delta. United still holds a significant presence in New York as the dominant carrier at its Newark hub, accounting for 69% of the daily departures. But Newark, (27km) away from LaGuardia, is somewhat less desirable for business travellers. LaGuardia is closer to Manhattan, which is more attractive for corporate customers than JFK or Newark.

The combined US Airways-American 19% seat share at JFK is just 2ppt below Delta’s 21% share. US Airways' strong presence on the US east coast also creates the opportunity for additional feed into long-haul flights operated by American and British Airways under their trans-Atlantic joint venture at a time when Delta is building its own joint venture with Virgin Atlantic to bolster its position in the lucrative New York-London market. 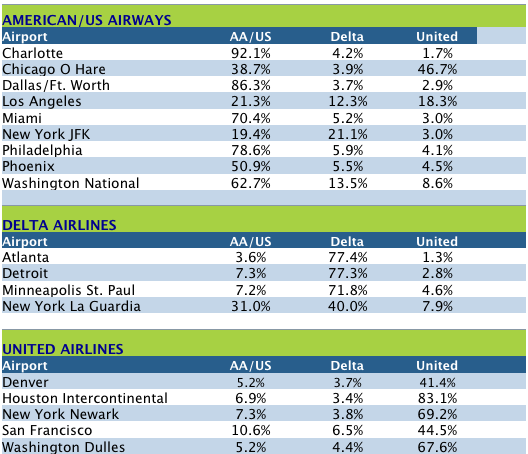 Combining American’s network with US Airways’ strength in the eastern US corridor should give the merged carrier a network more attractive to corporate travellers they’ve been unable to retain. US Airways recently estimated that American’s share among corporate travellers has fallen markedly since 2009 after the merger of Delta and Northwest and the combining of United and Continental. US Airways’ share has remained relatively flat while United’s fell in 2012 as operational disruptions that stemmed from merger integration sent frustrated corporate clients to other carriers.

The combined network based on departures for Feb-2013 also gives US Airways-American a 21% share in the fragmented, but important Los Angeles market on the US west coast compared with Delta’s 12% share and an 18% share for United. Overall, US Airways and American believe that combining their networks will allow the merged carrier to achieve prominence in the eastern and central US and a leading position in the western region of the country.

During Jan-2013 US Airways estimated that merging with American would result in the carrier having a leading market revenue share in the US. 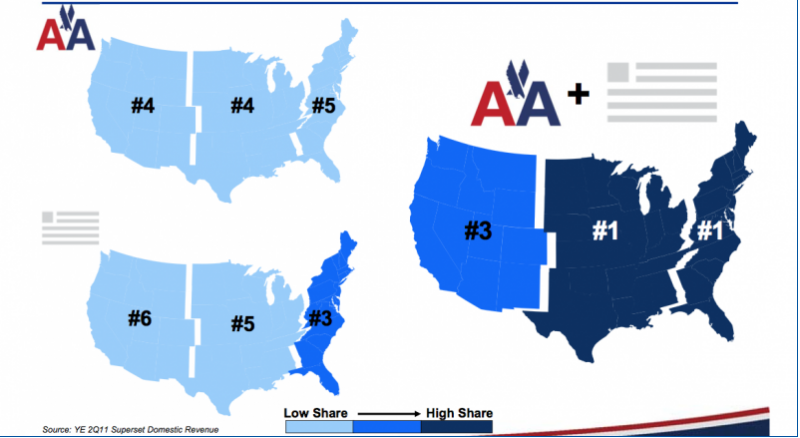 Executives at the carriers feel relatively confident that US regulators will endorse the combination, as American and US Airways only overlap in 12 markets. Based on schedules from 25-Jan-2013, the carriers estimate that US Airways serves 60 markets not included in American’s network while there are 130 destinations operated by American that are not served by US Airways. (See background information.)

Philadelphia and Phoenix Airports at risk for a downgrade

While management at both carriers are striking a familiar tone expressed by their predecessors that current service levels will remain once the merger is complete, it seems the role of US Airways’ hub in Philadelphia and possibly Phoenix could be at risk for a diminished presence in the network of the new American. With the push to bolster New York in order to claw back corporate share, it seems Philadelphia, 154km from LaGuardia, would be somewhat redundant in the network.

Over the last few years US Airways has focused much of its international expansion from its hub in Charlotte – the carrier’s largest hub in terms of daily departures. As of Jan-2013 US Airways operated to 25 international destinations from Charlotte compared with 27 from Philadelphia. As the combined carrier works to achieve its USD900 million in network synergies it seems more logical to position international gateways in the US northeast and southeast rather than having fragmented operations from two hubs in the northeast.

Phoenix is geographically positioned between American’s hubs in Dallas/Fort Worth and Los Angeles, and only offers service to 10 international destinations, largely to Mexico. With Los Angeles as a natural gateway to trans-Pacific destinations and American’s recent expansion into South America from Dallas, it is tough to conclude how Phoenix could continue to be a major hub for the new carrier. However, US Airways is currently headquartered in Phoenix, and the carrier has taken great pains to stress Phoenix would retain a significant corporate and operational presence in the region.

Similar to United and Delta, US Airways and American are making commitments to hubs that will take on a marginal role as the work to achieve projected synergies begins. Delta made similar commitments to Memphis, which has seen its service levels drastically reduced, and United was forced to commit to retaining service levels at Cleveland (a hub of Continental) for two years. That agreement expired in Oct-2012, and United has not made any drastic changes in Cleveland, but the carrier has been dedicating a majority of its resources to maintaining operational integrity after integration challenges triggered lacklustre performance in summer 2012. Once United feels it has a handle on its operational integrity, it can turn its full attention to improving network optimisation.

A boost for oneworld in the US

As expected, the combined carrier retaining American’s name will remain in the oneworld alliance. US Airways with its smaller international network has been a marginal member of the Star Alliance, and was never invited to join the trans-Atlantic joint venture created among Star partners Air Canada, United and Lufthansa. As of Jul-2012 roughly 20% of US Airway’s operations were dedicated to international service, compared with 38% at American, 48% at Delta and 49% at United.

But American and US Airways believe their combined network will dull Star’s penetration in the US market, estimating the alliance’s share of capacity between the US and global markets will fall 9ppt to 36% while oneworld will gain 8ppt and hold a 34% share once the integration is complete.

Alliance share (% of ASMs) from the US to international markets: pre- and post-merger 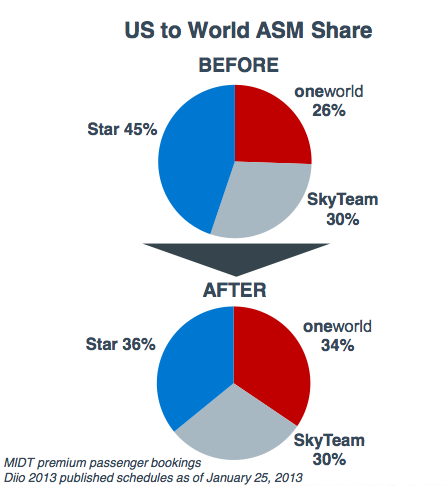 Overall US Airways brings little international scale to the merger other than supplementing American’s strong network in Central and Latin America with its network of destinations in the Caribbean, and some European markets that are not served by American including Amsterdam, Athens, Brussels, Glasgow, Lisbon, Munich, Shannon, Venice and Tel Aviv.

United’s Star partner Air China is the second largest carrier in the region in terms of seats on offer with a 20% share. 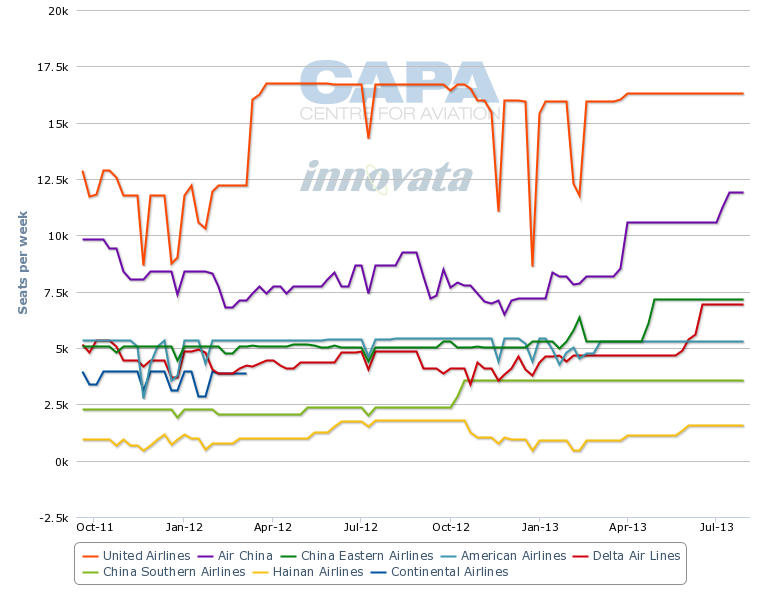 Unions must work to resolve the emotional issue of seniority

Once it publicly expressed its interest in pursuing American, US Airways moved quickly to negotiate deals with American’s labour unions (who hold positions on the creditors committee overseeing American’s Chapter 11 reorganisation). Based on those agreements American and US Airways estimate labour costs of roughly USD400 million. It is rare for carriers to disclose a labour cost estimate at the time they announce their intent to merge, but US Airways has acknowledged its past mistakes in other merger pursuits of not engaging labour early in the process. It failed to gain buy-in from labour groups as it pursued a hostile takeover of Delta in 2006.

Now the unions representing American’s pilots and flight attendants are working with their counterparts at US Airways to iron out representation and single labour agreement protocols. But the thorny and emotional issue of seniority integration must be resolved.

Previously, US Airways management has stated that the merger would allow the carrier’s pilots to “start over” after failing to reach a seniority agreement nearly seven years after US Airways merged with America West. Relatively new federal laws in place mandate the resolution of seniority issues through binding arbitration if there is a binding contract in place.

Finalising the contracts and working towards seniority integration for the combined carrier's two largest labour groups are major issues that need to be resolved now that the carriers are working to close the merger agreement in 3Q2013.

Once US Airways and American close their merger transaction they will embark on a roughly 18 month integration period while its two major rivals Delta and United will have the benefit of having completed their integration and should be enjoying the fruits of their labour with a somewhat predictable pattern of profitability. There is no doubt that US Airways and American will have their own share of integration challenges despite their best efforts to ensure a smooth combination.

While US Airways and American have much to prove as they work to combine their operations and cultures, once the integration is completed the real measure of consolidation’s worth in the US will be put to the test – if the big three can create sustainable profitability, something that is unprecedented in the global airline industry.

Cities not included in the separate American and US Airways networks: Feb-2013 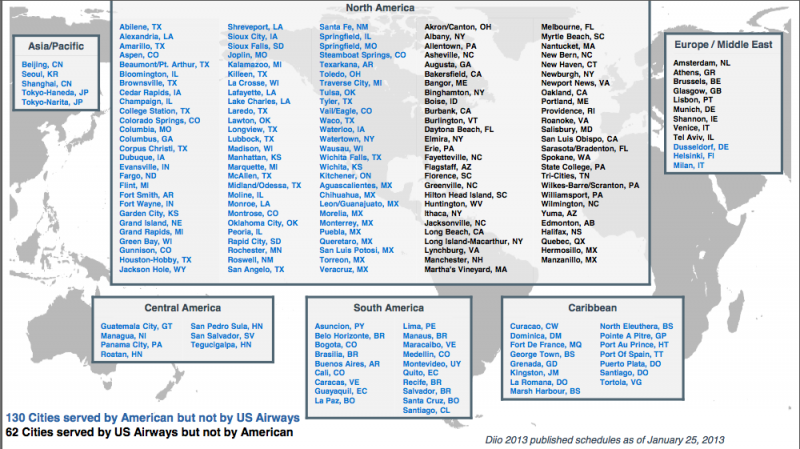