United Airlines management believes the carrier will turn a corner in 2013 after enduring significant integration challenges during 2012 that drove corporate customers elsewhere. Now that the carrier is declaring that is has largely overcome those obstacles, investors are pressing United for a timeframe of when they can expect the carrier to begin closing revenue gaps with its main domestic rival Delta.

United is refraining from offering an exact timetable of when it will achieve its merger synergies, but assures that it will win back lost corporate customers in 2013 while working to meet missed return on invested capital targets.

The significant decline in United’s operational reliability peaked during summer 2012 and the ensuing passenger discontent was reflected in the carrier’s 4Q2012 and full-year 2012 financial results. Factoring in USD1.3 billion of special charges driven by integration costs and wage increases from negotiated labour agreements, United recorded a loss of USD723 million for 2012. Its financial performance for 4Q2012 was affected by USD430 million of special charges, which resulted in a loss of USD190 million.

Throughout 2012 United’s unit revenue growth lagged the industry, and the trend continued into 4Q2012 as passenger unit revenues fell 0.3% and only notched up 0.8% for full-year 2012.

Some of the unit revenue degradation during 4Q2012 was caused by a USD140 million hit to the carrier’s revenue from the disruptions caused by Superstorm Sandy that struck the US east coast in Oct-2012. United missed its 10% annual ROIC target for 2012 by 2ppt, achieving 8% returns for the 12 months ending 31-Dec-2012. 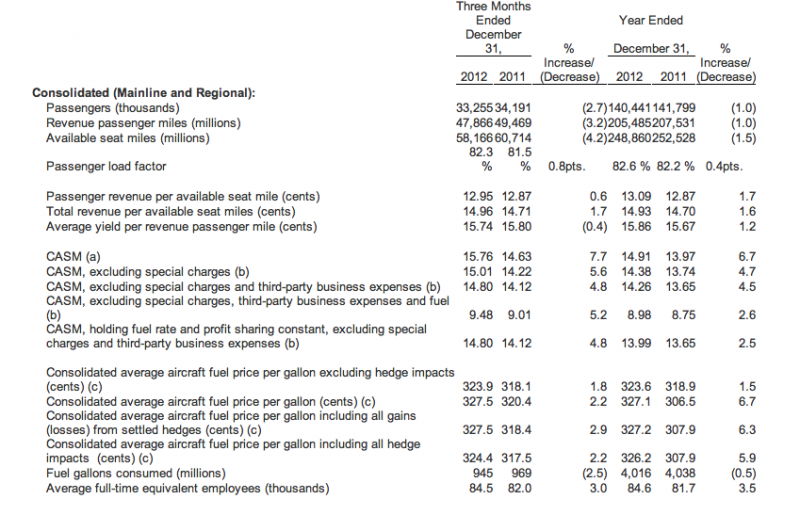 Part of United’s weak unit revenue performance relative to its peers was the fleeing of high-yielding corporate customers to other carriers at the height of operational challenges caused by the integration of United and Continental. The start of cross-fleeting during the summer of 2012 resulted in poor operational reliability during the peak travel season in the US. In Jun-2012, Jul-2012 and Aug-2012 United’s on-time performance was 70%, 64% and 72%, respectively.

By Sep-2012 the carrier had restored a large portion of its operational integrity by increasing spare aircraft levels, increasing staff at airports and slowing aircraft redeployment.

Mr Compton believes United’s rebound in its operational integrity and product enhancements will draw former and new corporate customers back to United. But the carriers those corporate customers have migrated to in lieu of United will use all the tools in their respective competitive arsenals to retain the high-yielding passengers.

And, like other airlines, mounting cost pressures are a concern – especially pilots

As United works to regain customer confidence, the carrier is also facing unit cost creep in 2013 driven by wage increases for its employees and pension expense. Its unit costs excluding fuel, special items and third party business expense increased 5.2% during 4Q2012 and 2.2% for the full year.

But carrier CFO John Rainey warned that United’s unit cost for 2013 will rise 4.5% to 5.5% on flat-to-1% capacity growth. He explained the unit cost increase was higher than United would expect on an annual run rate basis, and roughly 2.5ppt of the cost increase during 2013 will stem from awarding pay increases to a significant number of employees that had not been given salary increases for several years. United is adjusting the pay to market rates, but CEO Jeff Smisek stated that as the carrier concludes new labour deals with employees, United is attempting to make sure that with the market-to-market wage increases employees are receiving, the carrier gains efficiency and flexibility in the new contracts.

During 3Q2012 United recorded a USD454 million expense from lump sum cash payments it made in conjunction with the ratification of a new pilot contract and the completion of a pilot seniority list. Some of the flexibility United will enjoy from the new pilot contract is an ability to deploy 70-seat regional jets more efficiently. The legacy Continental contract severely limited 70-seat operations to Bombardier Q400 turboprops while United pilots were operating under a collective bargaining agreement that allowed for more flexibility in the deployment of larger jets.

Due to some of the timing of unit cost pressures United is facing during 2013, the cost inflation is weighted towards the first half of the year, said Mr Rainey. During 2H2013 United expects unit cost growth of 2% to 3% after recording an 8% to 9% rise during 1Q2013.

United also believes it can achieve some cost efficiency by introducing new technology to replace the extra employees it dedicated to restoring its operational reliability after the summer meltdown. The carrier also has reduced its executive ranks by 7% and is eliminating roughly 600 management and administrative positions.

United’s rival Delta is also bracing for unit cost pressure during 2013 after recording a 6% rise in unit cost excluding fuel in 4Q2012. Delta’s cost creep is driven by a wage increase resulting from a new pilot contract ratified in 2012 – also largely in relation to adjustments in regional airline operations – and investments the carrier is making to improve products. Delta management also, perhaps optimistically, believes its unit cost pressures should start to abate during 2H2013.

Investors are, understandably, seeking a timeframe for United's reversal of fortunes

Unlike United, some of Delta’s rising unit costs are offset by a revenue premium Delta argues it has enjoyed versus its industry peers for roughly 21 months. For the full year 2012 Delta’s 7% passenger unit revenue growth was 5.3ppt higher than United’s 1.7% increase.

Delta's unit revenue performance relative to the US industry: Apr-2011 to Dec-2012 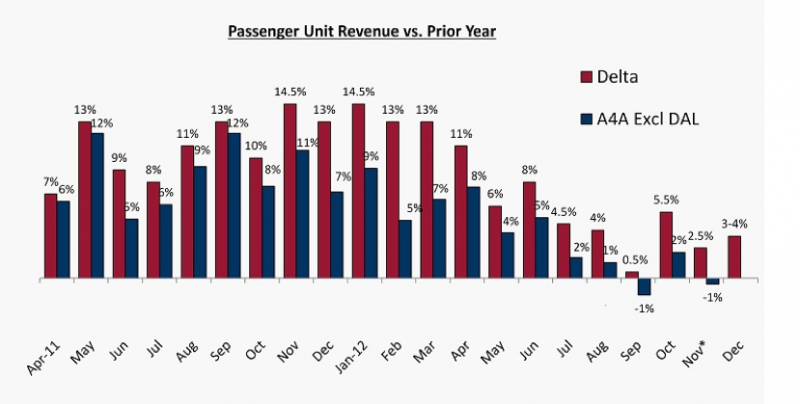 United cannot claim the same. Although top-line revenue growth at United and Delta during 4Q2012 and full year 2012 was almost identical, Delta’s USD1.6 billion profit in 2012 was well beyond the nearly USD600 million recorded by United (excluding special items).

As United continues to stress, the most challenging issues in the merger integration are largely resolved, so quite reasonably, investors are starting to question when United will close the profitability and margin gap with Delta.

Mr Rainey pointed out that “Delta is two years ahead of us in their integration”, but also acknowledged that United needs to close the gap in its passenger revenues.

Originally United aimed to harvest 75% of the projected USD1 billion to USD1.2 billion merger synergies during 2012. He states United netted about USD650 million from cost synergies and favourable performance in non-passenger revenues. He remains confident that United will reach its targeted merger synergies, but cautioned that while the carrier aims to meet those goals in 2013, “it is also reasonable to assume it could be a difficult bar and slip into 2014”.

While United is expressing a sigh of relief that the toughest year of its merger integration with Continental is over, the carrier has much to prove in 2013. The continued discussion over operational challenges being resolved will only intensify investor curiosity over when the airline will reverse its fortunes. 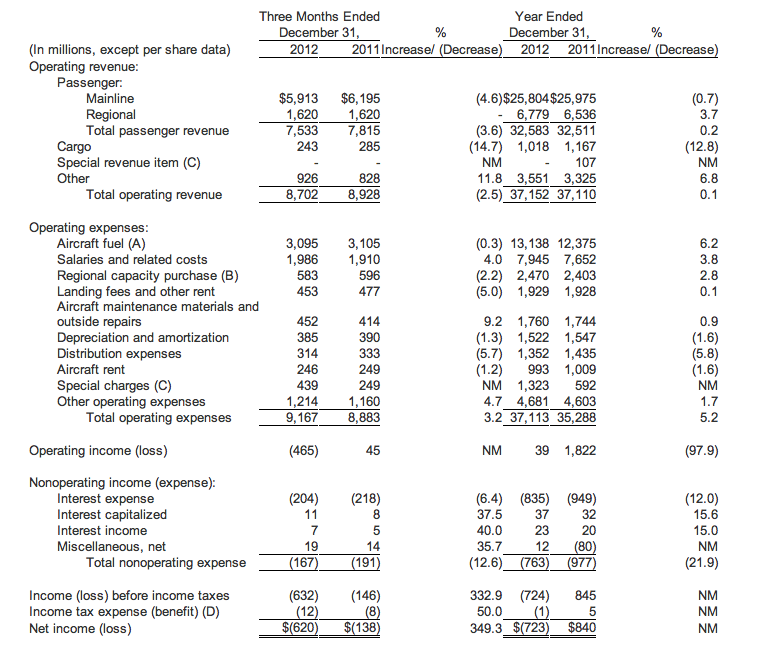