United Airlines believes the pain it has endured from its merger integration with Continental throughout much of 2012 is a regular byproduct of the complex process required in combining two companies. But the carrier is not disregarding the operational integrity that has vanished from its service during the last few months, and is working to correct those issues while working to get its financial performance in order to consistently deliver a return on invested capital in excess of 10%.

During the busy summer months between Jun-2012 and Aug-2012 United’s on-time performance fell by 4.6 ppts, 10.2 ppts and 4 ppts, respectively. Based on data reported to the US Department of Transportation (DoT) in Jun-2012, United reported the lowest on-time arrival of US carriers rate at 70%. United CFO John Rainey recently declared to investors that the carrier’s operational performance during the summer was unacceptable to its customers, while CEO Jeff Smisek admitted the less than stellar performance was triggered by “some mistakes on our part”.

Mr Smisek previously declared that 80% was the carrier’s on-time performance goal, and that United is working to correct the under-sparing of aircraft that contributed to the lacklustre operational performance.

The carrier’s growth of corporate passenger share has also been less than anticipated, Mr Smisek admitted, due to integration issues. United and Houston-based Continental merged in 2010 and now operate under the United brand.

Attempting to put United’s challenges in context Mr Smisek has opted to use a construction analogy. “In the middle of construction people will sometimes take detours around construction until that construction is finished”, he concluded.

But it is far from certain if those customers opting to avoid United during the integration process will return as the competition among US legacy carriers to capture corporate share remains intense. Delta in particular could benefit from customer spill from United in the New York market. Delta is in the midst of building out a hub at New York LaGuardia Airport to bolster its corporate share, which could become more attractive to United’s corporate passengers at Newark International Airport if the carrier’s integration problems persist. Recently Delta's management stated that the carrier's LaGuardia margin improved 3 ppts in Jul-2012 on a 40% increase in capacity as the carrier takes full control of 132 slot pairs it gained at the airport through a slot swap deal with US Airways.

For much of 2012 United’s monthly unit revenue performance has lagged behind its peers, and the trend continued through the peak travel period in the Northern Hemisphere. With the exception of Jun-2012 unit revenue growth of 5%-6%, the carrier trailed its legacy peers in the summer months, posting flat growth in Jul-2012, and a decline in Aug-2012 while its peers reported modest increases.

United counters that too much attention is placed on monthly unit revenue numbers, and concludes its overall unit revenue remains at a premium compared to its competitors as it estimates its unit revenues for the 12 months ending 2Q2012. 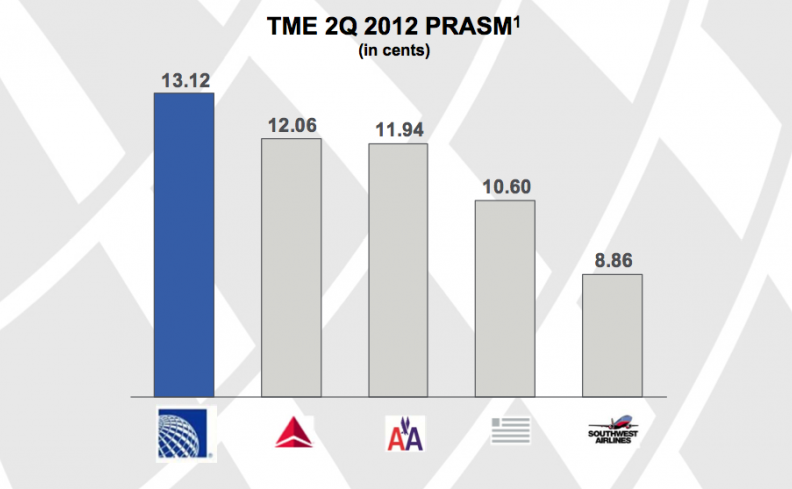 But United’s net results remain bogged down by integration costs reflected in the carrier’s 1H2012 operating loss of USD109 million, compared with a USD44 million loss at Delta and a USD355 million profit at US Airways. The losses stemming from integration issues, United’s sagging monthly revenue performance and the operational disruptions are all joining together to create competitive challenges for United, and consumer and investor patience may wear thin during the time it takes to overcome integration challenges. If a merger between American and US Airways is consumated, United could get some breathing room as attention is deflected onto the combination of the third and fifth largest US carriers in terms of domestic market share.

Stressing a long-term view, United, in its attempt to deflect attention away from monthly unit revenue performance, is pushing investors to examine its performance by another financial metric – return on invested capital. Recently Mr Rainey explained that in mid-2010 the carrier attained a return on invested capital (ROIC) of 11.3%, well above its 10% goal. For the 12 months ending in 2Q2012 the carrier achieved a ROIC of 10%. While the returns fell from mid-2010 to mid-2012, Mr Rainey stressed that United’s fuel costs also increased significantly during that time period, and the company still achieved its ROIC target. 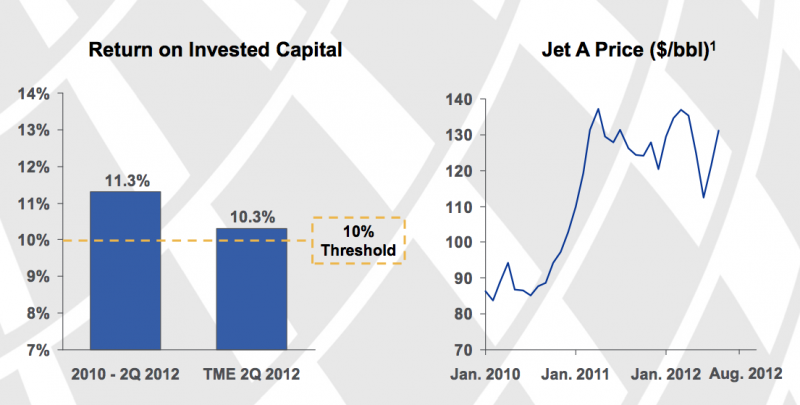 Getting its balance sheet in order

United also believes it is taking the right steps to bolster its balance sheet through reductions in overall debt and interest expense. The carrier has reduced its net debt by roughly USD4 billion since 2009 and has slashed its interest expense by 20% during the last couple of years from more than USD1 billion to USD800 million in 2012. Mr Rainey stressed the reduction in interest expense produces “recession proof savings” that are not dependent on load factors or GDP.

But United also admits that much work needs to be completed to strengthen its balance sheet. Mr Rainey explained that United currently has a 75%-80% leverage debt-to-capital ratio, and “that needs to come down dramatically”.

Pulling the capacity lever as some signs of softening demand emerge

During recent assessments of the demand profile going forward, United took a different view from Delta and US Airways, concluding it was seeing some modest slowness. As a result the carrier has refined its capacity guidance for Sep-2012 to Dec-2012 to a decrease of 2%-3% from previous estimates of a 1%-2% decline. The carrier has already stated its consolidated system capacity should fall by 1% in 2013, which is down from projections offered at the end of 2Q2012 of flat capacity growth to an increase of 1%. United appears to be a first mover in locking in some protection against the modest softening of demand potentially intensifying next year.

Mr Rainey also stressed United’s mainline fleet will remain relatively flat during the next five years as new Boeing narrowbodies coming online replace older aircraft. The first of 50 Boeing 737-900ERs the carrier ordered in Jul-2012 are scheduled for delivery in 2013 followed by deliveries of 100 re-engined 737 Max 9s beginning in 2018. Previously Mr Rainey has said United would aim for 1% annual capacity growth during the next five years, but the carrier has already shown its preference to shrink supply if economic signs start to deteriorate, as evidenced by its revised forecast for 2013.

There is no question United faces significant hurdles as it works to complete a complex merger against a growing backdrop of economic uncertainty. The carrier should take some comfort in Delta’s successful integration that occurred in the same unpredictable economic environment. Work continues behind the scenes to maximise the combined United-Continental network, most notably through the airline’s new-found ability to cross-fleet and deploy the right-sized aircraft across its 10 hubs.

United needs to strike a careful balance as the integration process continues of managing consumer and investor expectations to ensure the loyalty from both those key stakeholder groups remains intact once all the challenges are met. But both groups can be incredibly fickle, and any spill to competitors in such a low margin business will be tough to recover.